WEATHER:  A much better day with cloud first thing and clear later, much less wind especially later in the day.

We were all set by 9:30 am this morning, breakfast done, lunch bought, sea-sickness pills taken, we were onboard the Sapphire ready to go, then the pages went off!!. An American Cuckoo had been seen just across the harbour, so what did we do? Well the captian simply steered the boat over the harbour so we could have a look for this very rare sighting! As it happens the bird was not relocated so off we went for our pelagic trip.

Setting out on the Sapphire

It was very pleasant as we cruised past the other islands noting several species along the way, such as: Curlew, Oystercatcher, Shag, Cormorant, Grey Heron, Sandwich Tern and a Mediterranean Gull folowed the boat for a short while. As soon as we got out into open water we felt the wind and the swell of the ocean, it was difficult to stand for the next two hours, so we sat.

The crew lowered  a bag of 'chum' into the water to attract sea-birds and soon we had a following of Great Black-backed Gulls, with Herring Gulls and the occasional Kittiwake. Oer the next 2-3 hours we saw Arctic and Great Skuas, a couple of Razorbills, lots and lots of Gannets and not much else.

When the boat stopped near Seven Stones Reef we sat for another couple of hours, the sea was much calmer and we could stand for a while. We added 3 or four sightings of Storm Petrel to the list and a Common Tern fed around the boat for a while. The Shearwater sightings increased, mostly Balearics but also a single Manx Sheartwaer aopeared alongside a Balearic, it was good to see a comparison.

During our return journey we saw Harbour Porpoise, Portugese Man-of-War and Grey Seal, we were out on the boat for 6 hours, it was good to get back on dry land around 3pm.

it is really beautiful out here, this is Old Town Bay

All sorts of birds had been sighted in our absence, so after a quick cuppa we set off to Old Town to look for Wryneck, Firecrest, Melodious Warbler and the BLUE ROCK THRUSH had been relocated near Penninis Head. 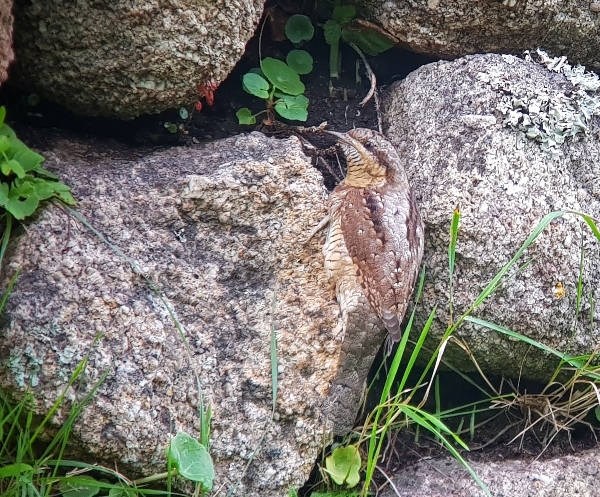 We were fairly successful over the next hour or so, we all got to see the Wryneck, most of us saw a Firecrest and only I got a glimpse of the Melodious Warbler. The Blue Rock Thrush did not show again.

For some reason the group was very tired and after an early dinner at 6:30pm most of the group retired to their bedrooms, I was asleep by 9pm.