WEATHER; dull and cloudy to start with, some light rain, then it cleared into a wonderful bright day. Top Temp 16C

It was a long and enjoyable day, lots of sightings, lots of walking and several very tired birders at the end of it. We set off in dull light and walked up to Longstones where we saw the 6 Pink Footed Geese that had been around for a few days, we also watched Linnets, a single Blackcap and we heard Crossbills flying over but we did not see them. 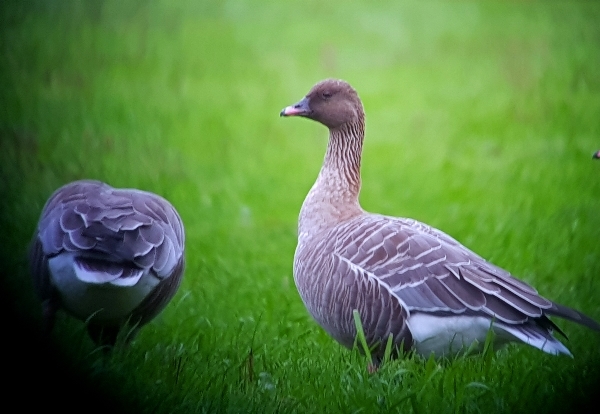 Two of the six Pink-footed Geese seen at Longstones

As we walked further along the track towards the Holy Vale we saw a single GREYLAG GOOSE fly over ( Greylag Geese are very rarely seen on the Isles of Scilly and is much rarer than most birds currently present on the islands). Once we got into the wooded area of the Holy Vale we spent some time scanning the tree canopy for any movement, we saw Blue Tit and Great Tit, Wren and Blackbird before we found a Chiffchaff and then a Spotted Flycatcher. A little more perseverance produced another flycatcher found by Guy, this was a Pied Flycatcher and not the hoped for Red-breasted Flycatcher.

Before we moved on, Debbie mentioned a Moorhen-type bird she had seen skulking in the undergrowth, her description of the bird was perfect for Spotted Crake, but we never saw it again so we had to leave it off the list. At the end of Holy Vale we burst out of the wood and found ourselves in a reedy marsh area with stands of sallow. We knew a Yellow-browed Warbler had be seen in the sallows recently and that is where Guy found it. We all had great views of this little beauty.

From the same area we scanned a hillside and found two Whinchats, a Stonechat and another Blackcap. The track continued towards Porth Hellick Beach, we stopped at a place on a boardwalk where we could see some of the western end of Porth Hellick Pool and it was there that we found the PECTORAL SANDPIPER, we all had good scope views of it and we also found 5 Common Snipe, 2 Teal and a Mallard. We heard a Cetti’s Warbler and a Water Rail during the next part of the walk. 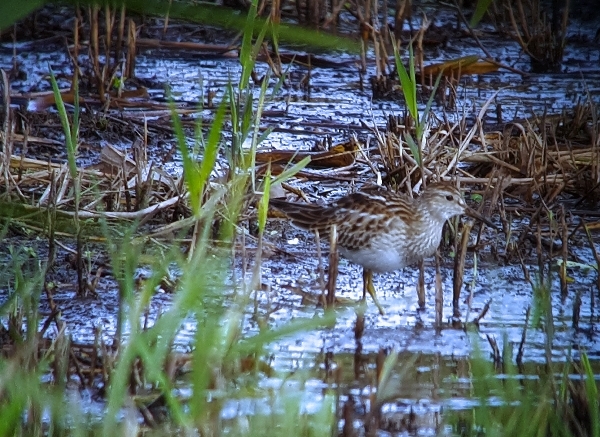 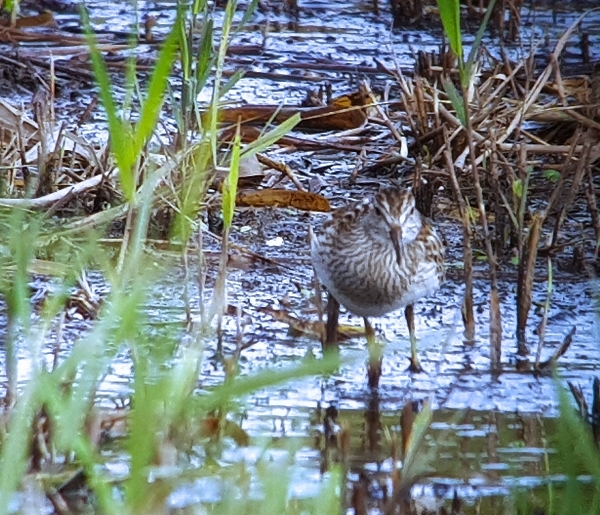 The very picturesque Porthellick Beach was a joy to look at, for me it is one of the most beautiful places on St Mary’s. We watched Oystercatchers, Turnstones, Greenshank, Ringed Plover, Shag and a few Gannets were seen out at sea.

part of Porthellick beach - this photograph does not do it justice

The coastal path leads up to an ancient burial chamber and that is where we sat and ate our picnic lunch, it was another lovely site with commanding views all around, a very fitting place to be buried. Scanning the coastal path we found a bunch of Meadow Pipits, Goldfinches, Linnets and we found 3 Northern Wheatears. A Raven called as it flew towards Porth Hellick, the Graylag Goose flew over once more and 3 Crossbills called loudly as they dashed across the top of a row of pines.

looking back from the Burial grounds to Porthellick beach and Pool

We climbed up to the top of the hill over-looking Deep Point and it was Brenda who spotted a pod of Harbour Porpoises, there was about 12 of them. They had a large entourage of Gannets following them.

For the next hour we made our way back to Lower Moors by taking the main road that circles the island, we saw very little during this period of the day, a Common Kestrel was the most noteworthy. By the time we reached the entrance to Lower Moors some of group were very tired and they decided to leave us, the rest of us ploughed on, we found a couple of Goldcrests in the sallow bushes and that was all. 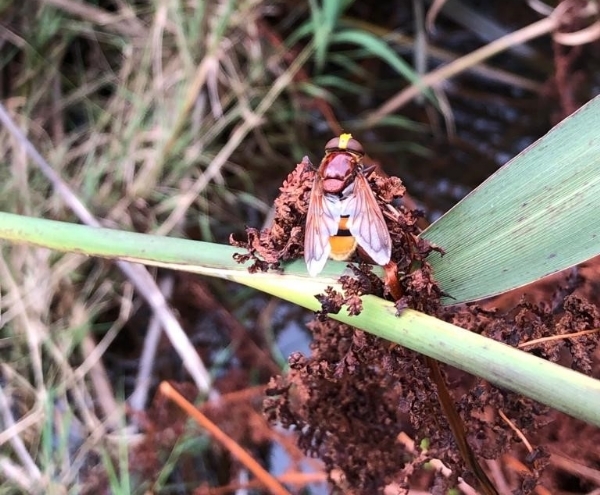 the Hornet Hoverfly female (Volucella Zonaria)  - a continental species that is rapidly colonising southern Britain due to global warning. It mimics the hornet to protect itself from predators, it is harmless and does not sting. Photo by Guy

At the Old Town ‘end’ of Lower Moors we joined a group of birders that was staking out a row of bushes hoping for a sighting of a star bird, the SWAINSON’S THRUSH. Luckily for me the bird showed and was visible from where I was standing, but unfortunately the other four members of the group were a little too far to the left of the main group and so they missed it. The bird did not show again whilst we were there. 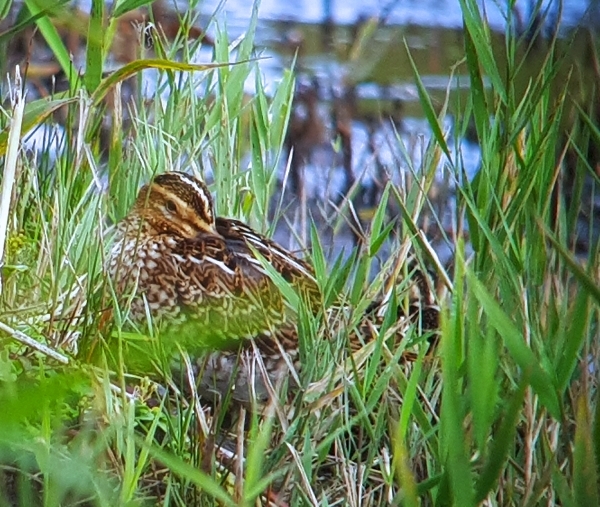 a Snipe seen at Porthellick Pool

Walking back up the hill from Old Town Church towards Hugh Town we found yet another Goldcrest and to our great delight we found another Yellow-browed Warbler, very soon a small crowd appeared around us and so we moved on. It had been along day with plenty of walking we were all tired. We had a lovely dinner at the guest house, acold beer went down a treat, and so did an early night.