WEATHER: a chilly day with a cold wind, but bright and sunny for most of the day, cloudy late afternoon.

We had a measure of success today, at last, with some nice additions to our list. Our first port of call was Porthloo Beach where a Black Redstart had been noted for the last couple of days and we hoped to see it. The wader numbers on the beach had increased, dozens of Oystercatchers, Ruddy Turnstones and a couple of Bar-tailed Godwits were now joined by a small group of 4 Sanderlings which was a nice addition to our list. We never found the Redstart.

the view looking back to Hugh Town from Porthloo Beach

Before walking around to the quay to catch a ferry-boat we visited Porthcressa Beach, out on some rocks in the bay we found 3 Sandwich Terns and two Mediterranean Gulls with Herring and Great Black-backed Gulls. The ubiquitous Oystercatchers were strewn across the shoreline with Ruddy Turnstones and a couple of Shags were feeding out in the middle of the bay and gannets were ever-present out to sea. 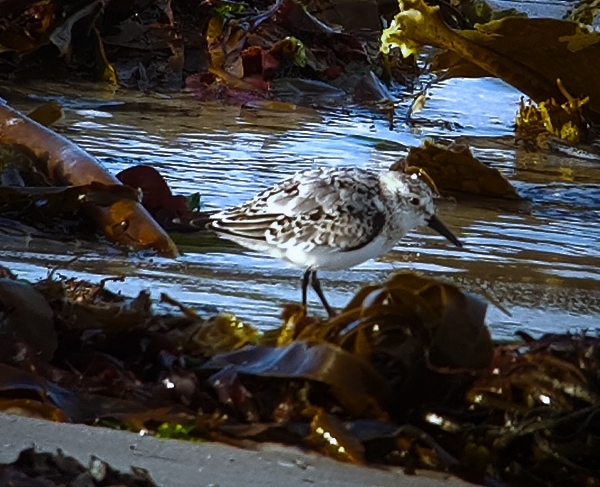 a Sanderling - a new species for our Scilly List

Our destination today was going to be St Martins, but as we walked towards the quay to catch the ferry-boat, news broke that a SWAINSON’S THRUSH had been found on Bryher. The group voted unanimously to take the boat to Bryher, which consequently, was packed with over 50 other birders all with the same intention, face-masked are compulsory during all boat trips.

During the speedy trip across to Bryher we noted a group of 8 Pale-bellied Brent Geese, Grey Herons, Little Egrets, Curlews and dozens of European Shags. Before too long we were on the jetty at Bryher and marching up and over the hill to Great Pobblestone, a picturesque bay, on the other side of this small island.

We joined a throng of other birders, social distancing was maintained as much as possible and 90% of the birders wore their face-masks as we did. Over the next hour we had excellent views of the SWAINSON’S THRUSH, it was very showy, but at a distance of about 50 meters. The group had frustration at first but all them eventually had good views in the scope, it was so pleasing after our three failed attempts to see this species on St Mary’s. 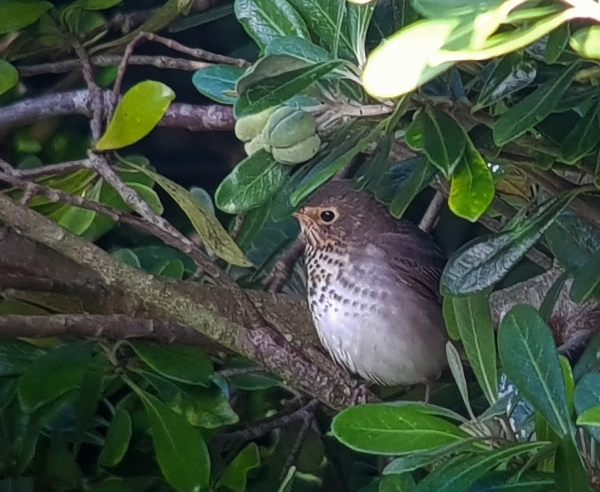 a leaf is hiding the bill of this American Swainson's Thrush, go on show us your bill! 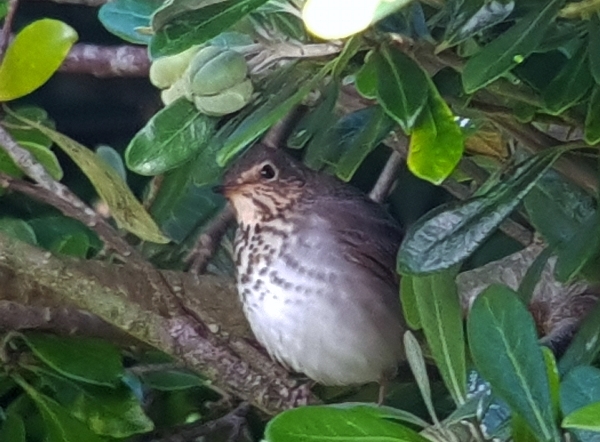 It was just after 12 noon when we came away from the ‘twitch’ we walked a short distance and found a sheltered spot to each our picnic lunch. During lunch we noted Common Kestrel, Meadow Pipit, Common Stonechat and several other common species. Before we returned to the quay we stopped at ‘Fraggle Rock’ cafe for a quick hot drink.

our view from Faggle Rock cafe across to Tresco

The return boat left the quay at 2:15pm and we made sure that we were near the front of the queue, from the quayside we scope the rocks in the Tresco Channel and found Greenshanks with all the common waders, we searched for an ICELAND GULL which had been seen earlier without success.

the queue for the returning boats to St Mary's

Our packed boat left on time, we added Eurasian Spoonbill to the list along the way whilst a second boat behind us, carrying those at the back of the queue saw the ICLELAND GULL (sometimes it pays to be last).

Once we were back on St Mary’s we decided to march up to Maypole to look for a Red-backed Shrike, we spent a good ½ an hour walking up there and then a further ½ hour looking for the bird. Finally we saw the bird, it was distance but a Red-backed Shrike went our list, hooray! During our vigil we noted 3 Crossbills, a Sparrowhawk and lots of Sparrows and Starlings.

From Maypole we walked down a steep lane to Holy Vale and then up a steep, dirt track called Sandy Lane. From a five-barred gate we watched a LAPLAND BUNTING feeding alone in a grass meadow. Well, that was mission accomplished, we walked back to Hugh Town, first along Sandy Lane which took us to the main road at Rose Cottage. This cottage has a unique hedge around it because the hedge was known to harbour a colony of STICK INSECTS, we saw 3 of them, a green one and two brown ones. 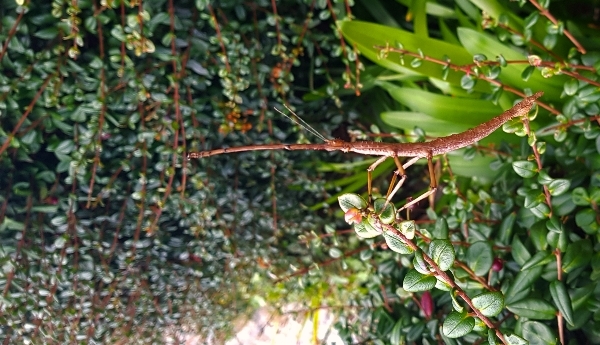 In the field opposite Rose Cottage was a gaggle of geese,  7 Pink-footed Geese and a Greylag Goose, some people often scoff at Greylag sightings because so many are domesticated. However, on the rarity scale for the Isles of Scilly, the Greylag is a much rarer sighting than the Swainson’s Thrush!!! 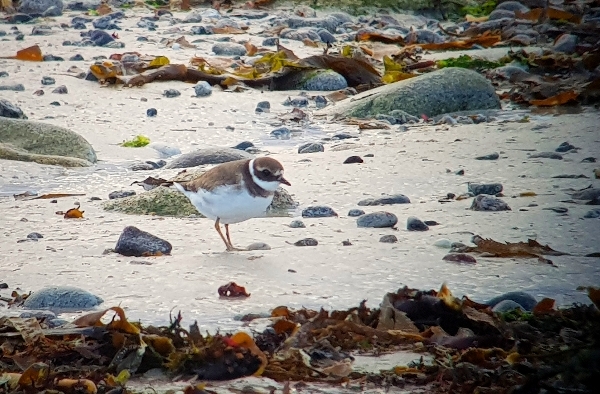 At Porthloo Lane the group split up and only three of us went to Porthloo Beach for a second attempt at seeing the Black Redstart, the others went back to the guest house. We failed once again to see the Redstart but the waders on the beach were terrific to see. We saw 8 Sanderlings, 3 Ringed Plover, a single Dunlin, two Bar-tailed Godwits, two Curlews and good numbers of Oystercatchers and Turnstones. 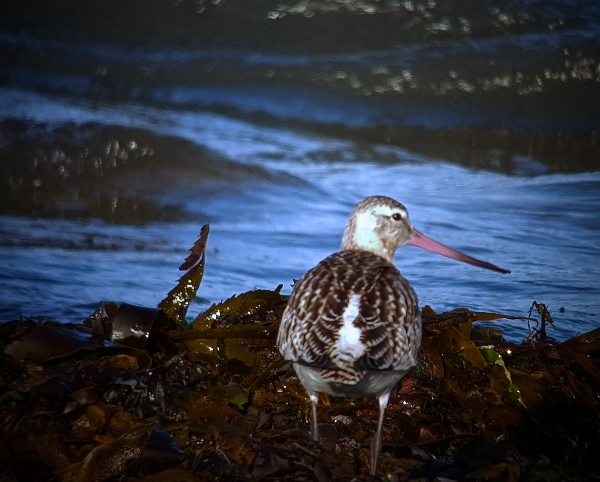 The light began to fade, so we returned to the guest house at 6:30pm. Dinner was take at 8 in the Atlantic Hotel in Hugh Town because our guest do not serve dinner on Saturdays, Sundays or Mondays.