This was our longest walk so far, we covered 8.5 miles and most of it was along the rugged coastline in pretty poor weather conditions, hence our bird list was pretty poor too. We set off from Porthcressa Beach and headed out to Penninis Head to look for a Snow Bunting but we never saw it, we found Stonechat, Wheatear and lots of Meadow Pipits. As we walked towards Old Town Bay we heard that the Snow Bunting was showing so we climbed back up the rugged path for a second attempt. This time we got the bird, but it did not show well and kept mostly hidden behind the rocks.

the foggy strat to the day, you cannot see the airport above Old Town Bay

Our walk through Old Town and out to the airport produced very little until we walked past the end of the runway of the airport, no planes were flying today because of the abysmal weather. Just passed the runway there is a large area of gorse and heather heathland and that is where we found a Ring Ouzel, we only had two short views of it and we heard it call so that was enough. We also found more Wheatears and Pipits.

In Porth Hellick we sat in the shelter of a row of pine trees and ate our lunch, a couple of Goldcrests flitted about above us whilst we ate. Walking along Porth Hellick beach we scanned the fresh water pool and found Common Snipe, Eurasian Wigeon, Moorhen, Mallard and we heard a Cetti’s Warbler calling.

The walk from the Porth Hellick to Deep Point was much more pleasant as the rain stopped and we were out of the wind, we spent a while in a disused quarry looking for a Wryneck that did not appear, but we did find two Whimbrels on the rocks below us a little further along the coastline.

a dry time - this is where we found the Ring Ouzel

The rain returned as we approached Watermill Cove it was a relief to head inland and find shelter below the trees. Over the next hour we walked to to Newford Ponds and onto to Maypole. At the ponds we found a Yellow-browed Warbler and usual dodgey ducks called to be fed. Just before Maypole we looked into a field and found our second Lapland Bunting of the trip. This one was so obliging and fed just twenty meters from us. 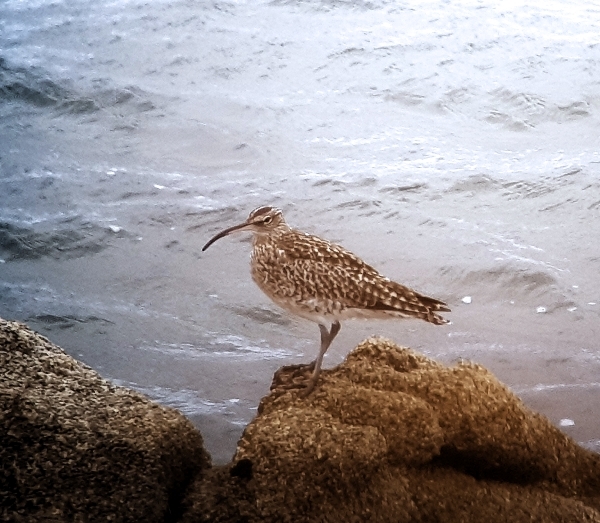 one of the two Whimbrels seen on the rocks

At Maypole we spent a little time looking for the almost ‘resident’ Red-backed Shrike, Guy missed it during our last visit and he missed it again this time. Debbie and I were only ones to carry scopes today and the bird only showed fleetingly and you needed a scope. We did see a flock of Siskins flying around and Guy heard Crossbills once again. Before we stopped at Carreg Dhu Gardens Guy found another Yellow-browed Warbler. In the gardens at Carreg Dhu we looked for a Firecrest that had been reported earlier today but nothing showed except a very tame Blackbird with a broken wing, it would feed from your hand, I am sure the same bird was there last and the year before. 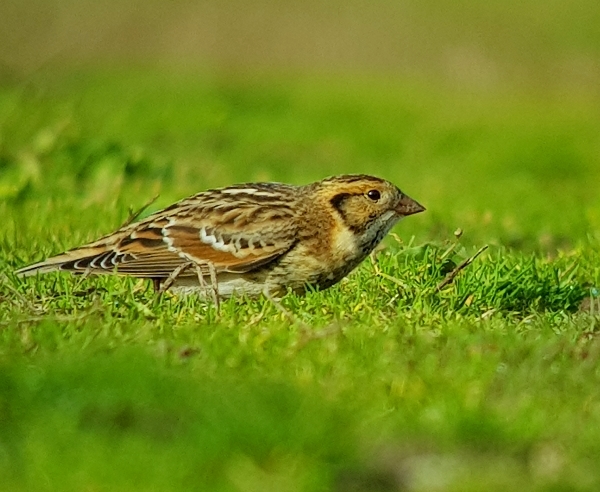 We arrived back in Hugh Town around 6pm, it had been a long day and long walk, we were all tired, we ate dinner in town, everyone recovered as we ate, had a nice drink before retiring at 10pm. Our last day was over but we still had time for one last excursion tomorrow before our 1pm flight.