Our pre-tour excursion started at 7am in Yeovil and we collected Cheryl from her accommodation, Cheryl is one of three Americans who are joining the WINGSPAN Tour to the Isles of Scilly on the 16th. The other two, Joe and Cindy, will be collected later today from London, Heathrow for this two day pre-tour excursion.

Our first stop was at the Lakes at Langford, which is due south of our route to Heathrow north of Salisbury. It was beautiful there, a fantastic and colourful sunrise and dead still air. The noisy hordes of Canada Geese arriving as we got out of the bus added to the ambience. 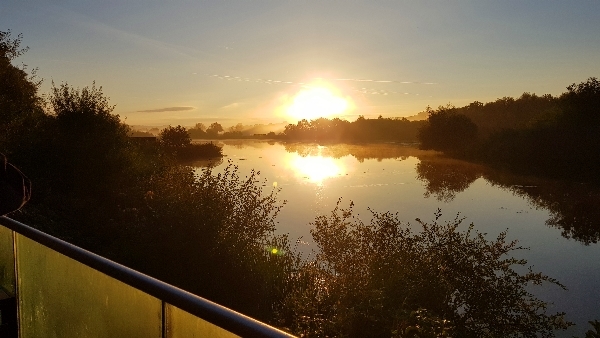 Cheryl was excited to see a flock of Long-tailed Tits with Blue & Great Tits and also a couple of Chiffchaffs. Se jumped for joy when we saw a Sparrowhawk zoom past, it was a lifer for her. 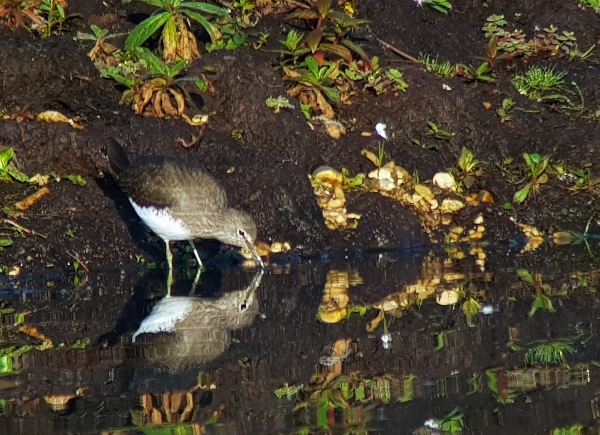 Along the trail to southern most pool we added Robin, Dunnock, Cetti’s Warbler (heard) and as we neared the hide we saw a small flock of Goldfinches. From the hide we added Green Sandpiper, Meadow Pipit and Reed Bunting.

We searched for more waders without success and we tried once again to see a Cetti’s Warbler getting only the briefest of views.

Next we tried an area of Salisbury Plain where we hoped to see some of the re-introduced Great Bustards, we parked near a farm were they had been seen by others in the past. It was quite windy out there but we saw many birds, none of them close except for Linnets, House Sparrows and Meadow Pipits.

Distant birds included four Common Buzzards, a Peregrine Falcon sitting on the ground, Common Kestrel and Red Kites. Also flocks of Skylarks, some distant Pheasants and to our great delight we saw 5 Grey Partridges, also distant but unmistakable, another lifer for Cheryl. Another stop produced even fewer birds.

After stopping for a bite to eat we set off for Heathrow Airport to collect Joe and Cindy, another couple of Americans and friends of Cheryl’s. They landed on time and we were back on the road around 3pm.

We had enough time to revisit the Lakes at Langford, but this time we only visited the first two lakes around the café. Cindy and Joe got see most of our earlier sightings but missed a few. We added Lesser Black-backed Gull and one or two other species before leaving for Somerset.

I  dropped Cheryl, Joe and Cindy off at their hotel and Nigel and I went to stay at my flat, Dawn cooked us a lovely bolognaise.

What an epic day we had today, we visited several sites as we made our way down to Cornwall. We had to start at Sutton Bingham as was less than 2 miles from the hotel in East Coker. Cindy, Joe and Cheryl saw a few good birds for their ‘Brit’ List.

It took about 40 minutes to drive to Lambert’s Castle near Lyme Regis, it was quite misty when we arrived but it did clear somewhat after a while. For the first 20 minutes we saw very little then we bumped into a mixed flock of Long-tailed Tits, with Coal Tit, Blue Tit, Great Tit and a Treecreeper. 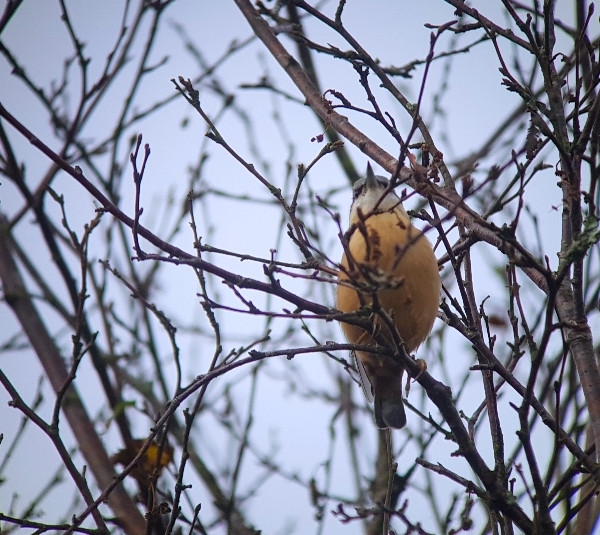 We added Eurasian Nuthatch when a very showy individual flew into a tree above us. Lots of Meadow Pipits & Linnets flew around and we had a sighting of 20+ Redwings as they flew above us in the mist.

Further sightings were made as we walked around the top of the steep escarpment, we added Yellowhammer, Mistle Thrush, Chaffinch, Greenfinch and Jay to the day list.

Next we drove into Devon and visited Seaton Marshes, specifically Black Hole Marsh. More birds went on the list there as we viewed the wader scrapes from the Island Hide. Redshank, Greenshank, Black-tailed Godwit, Common Snipe, Lapwing, Dunlin and Common Shelduck were all seen well. A Common Gull was nice to see with Black-headed and Herring Gulls. 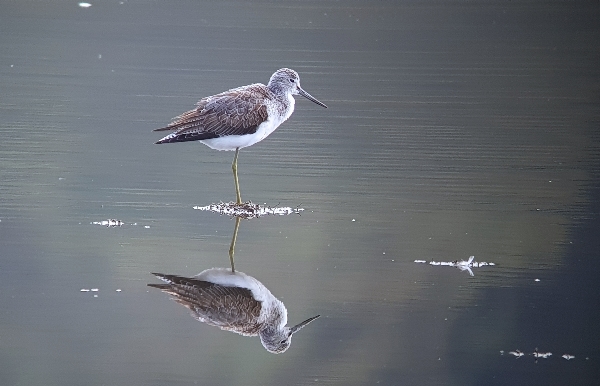 Then Cindy picked out a Water Rail, we also added Grey Heron, Little Egret, Coot, Teal and Moorhen to the day list.

We then drove into the town centre to buy picnic supplies from a supermarket before moving on to a picnic site on the eastern bank of the River Axe.

We watched Eurasian Curlew, many Black-tailed Godwits, Wigeon and hundreds of gulls, mainly Herring Gulls but also Great BB & Lesser BB. We picked out a Kingfisher and saw a couple of Pied Wagtails. Three Common Buzzards circled over us and we saw Oystercatcher and many more Curlews further down the river.

A quick stop on Aylesbeare Common was successful in finding a DARTFORD WARBLER, Cindy and Cheryl were very pleased with this new lifer. A couple of Meadow Pipits was the only other species that we saw on the Common.

Our visit to Bowling Green Marsh, Exeter was very rewarding, we arrived just as the tide was nearing its highest point. Hundreds of waders sat in front of the hide with dozens of Geese, Ducks, Coots and Moorhens. Large flocks of Black-tailed Godwits dropped in, a swirling mass of black and white colour. 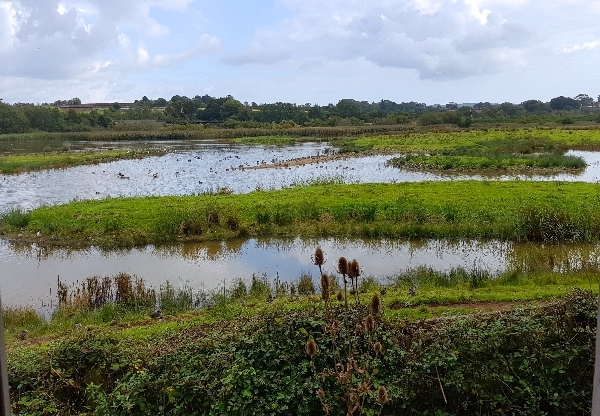 the view from the hide at Bowling Green Hide 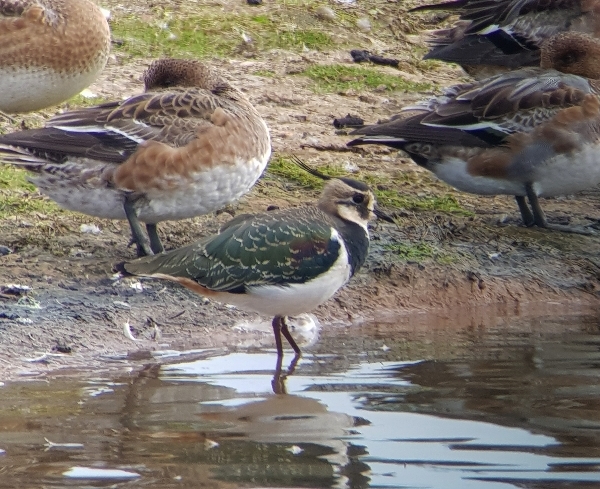 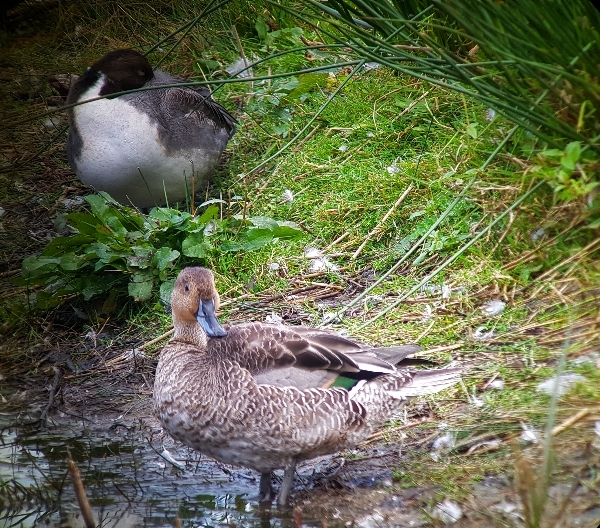 a pair of Northern Pintails, the female alert whilst the male dozes in the afternoon

A walk round to Goat Walk produced very little extra, the tide was well up by then and just Mute Swans, Common Shelduck and lots of Gulls were out on the water.

Finally, we set off for Cornwall, it is a two hour drive from Exeter under normal circumstance but today was Friday and a lot more traffic was on the road. The road improvement works slowed us down and it took nearly three hours to get to the Hayle Estuary, our last birding destination of the day.

We parked the bus near the Carnsew Pool and marched off to view the waders that were usually present, the tide was now falling rapidly, we wanted to get there before the waders dispersed into the estuary.

We saw Redshank, Greenshank, lots of Curlews, a single Dunlin and several Bar-tailed Godwits. But, our main target bird was a SEMI-PALMATED SANDPIPER,  a visitor from North America. The light was fading as 6pm approached and we were losing hope. 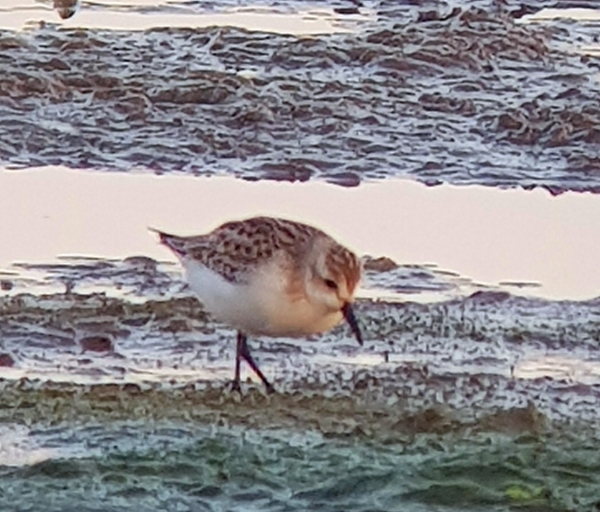 A Grey Plover dropped in with a few more Dunlin, then a larger flock of Dunlin landed and the SEMI-PALMATED  SANDPIPER was with them. Fantastic for Nigel and myself but not such a great bird for my American friends!!

We scanned the estuary from the high bank around the Carnsew Pool looking for Brent Geese but none were found. We did add Mediterranean Gull to the list and the sky began to colour up developing into a lovely sunset. 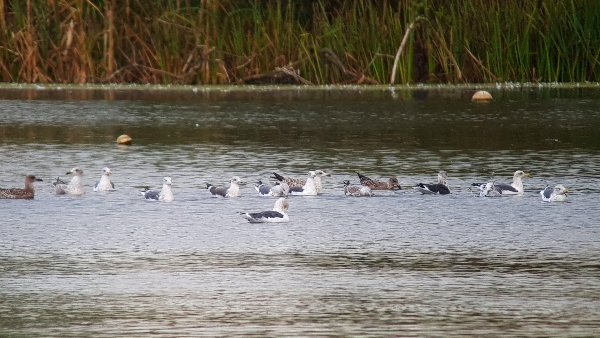 We ate out in Hayle after checking into our hotel, we also visited my friends Brain and Mary, who were kind enough to take a delivery of two PCR Covid testing kits for Joe and Cindy. Mary was her usual perfect host, tea, coffee, wine, beer, biscuits and snacks were soon on the table.

Tomorrow we catch the ferry to St Mary’s for a week on the Isles of Scilly.