It was barely light when we set off for our pre-breakfast walk at 7am. We walked to the Hugh Town Marina and scanned the beaches and the bay. A Common Kingfisher was our first sighting it dashed along the beach ahead of us. We then ‘scoped the distant beach at Porthloo and noted several waders feeding there so that is where we headed for. 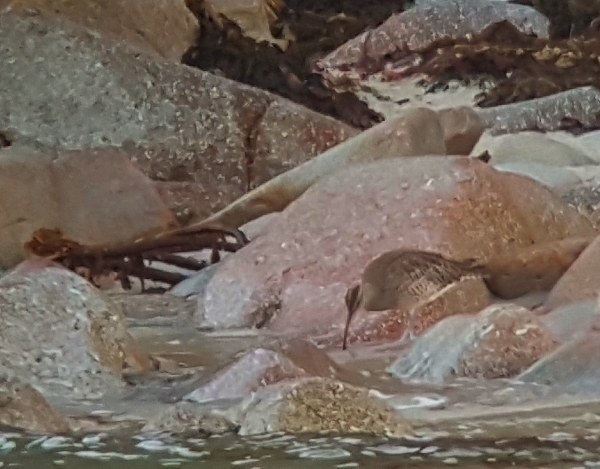 record shot of the Whimbrel found on Porthloo beach

Along the way we passed smaller beaches where we found Ruddy Turnstone, Oystercatcher and a single Dunlin. A few Rock Pipits walked around on the rocks and a couple of Pied/White Wagtails flitted about on the beach chasing brine flies. 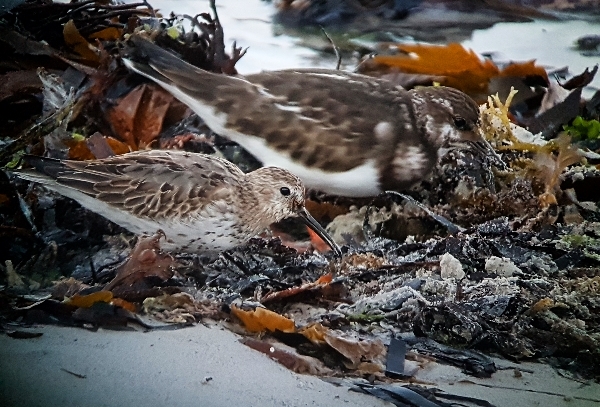 Dunlin and Ruddy Turnstone on the beach

At Porthloo we enjoyed good views of Eurasian Curlew with 16 Oystercatchers, a dozen Blac k-headed Gulls and more Ruddy Turnstones. Just before we left we found a single Whimbrel and a single Northern Wheatear. A Blackcap was seen on the way back to the guest house where a very nice breakfast was consumed.

We reconvened just before 10am in preparation for our walk to the dock to board our boat transfer to Tresco. By 10:30 we were on the quay at New Grimsby, Tresco. We had listed quite a few species during the crossing but the only new species for the list were Sandwich Tern and Little Egret (8). 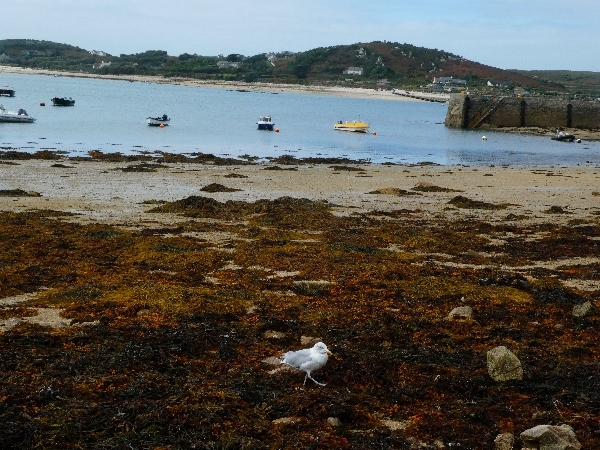 The view from New Grimsby to Bryher

Once on land a short walk found us at the western end of the Great Pool where we were able to scan most of the lake from a sandy bank. We saw dozens of Common Coots, Gadwall, Mallard and Eurasian Teal. We also found Moorhen, Mute Swan and about a dozen Greenshanks.

Our main target bird at the lake was the Pectoral Sandpiper and we were told that it had been seen at the eastern end of the pool, so off we went. We spent some time in the David Grant Hide where e saw more Greenshanks, a Water Rail and a Wood Sandpiper, but not the Pec. Sandpiper. Then we found the Pec. Which was showing well but very distant, in fact it was back at the western end of the pool where we had just walked from! 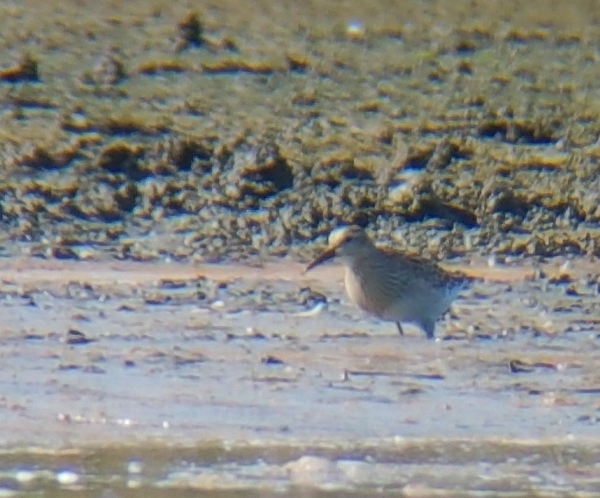 a record shot of the Pectoral Sandpiper - this bird was quite distant.

From a second hide we had much closer views of the bird which was feeding alone on the muddy shore.We also listed 3 Redshank and a single Dunlin. We also saw our first Red-legged Partridges and Common Pheasants.

It was now approaching 1pm so we decided to eat our picnic lunch on the beach near New Grimsby, it was very pleasant, a nice temperature and beautiful scenery. From there we went straight to the ice-cream shop, how nice was that? 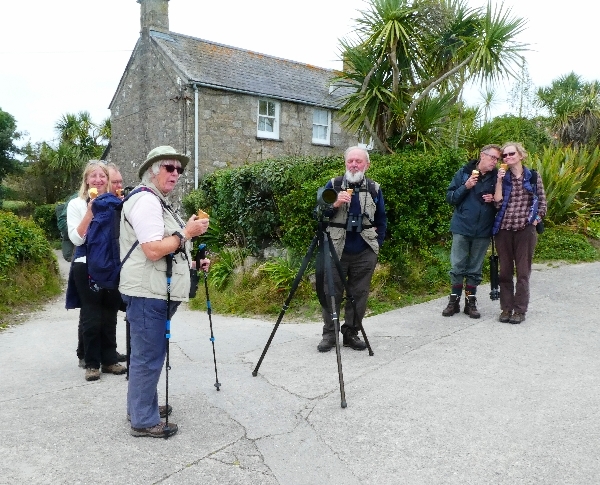 my group enjoying themselves

For the next two hours we walked to Old Grimsby and back to the eastern end of the Great Pool, we found lots of birds but nothing to put our names up in lights. A couple of Ravens, a Common Buzzard, Eurasian Sparrowhawk, lots of Meadow Pipits, Rock Pipit, Northern Wheatear and another Curlew. 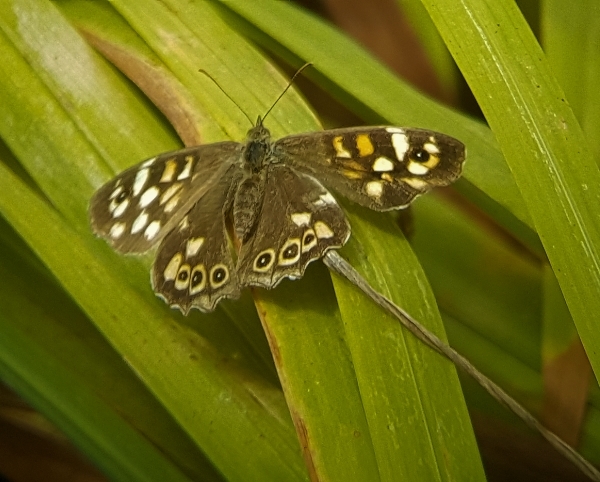 Our second visit to the Pool produced yet another Water Rail and the Abbey Pool gave us Canada Goose and a Whinchat. At the beach area around Carn Near, where we caught our return boat, we found Sanderling and Greater Ringed Plovers, both new species for the list.

It was almost 5pm before we went out birding again, having returned to St Marys and walked back to our guest house and taken time for a quick cup of coffee. We made a second visit to Lower Moors bird hide because a Jack Snipe had been reported from there. We sat in the first hide for 30 minutes watching Common Snipe and 3 more Water Rails before we transferred to the second hide where the Jack Snipe was now showing. We all had short, but good views of the bird before it disappeared into the reeds.

Tonight we ate dinner in the Scillonian Club and enjoyed the views out of the window over the bay whilst we ate.