WEATHER:  yet another misty day, it was warmer than yesterday and the air was absolutely still. Temp 15C

We set off for our very last birding excursion just after breakfast at 9am. We walked to the ‘Holy Vale’ track which took us through some woodland where a Yellow-browed Warbler was recently seen. There was no sign of any warblers in the trees so we continued to the hides which overlook the Porth Hellick pool, there we watched Common Snipe, Greenshank, Eurasian Teal and a fly-over Common Kestrel.

We ‘scoped the beach at Porth Hellick and saw the usual Oystercatchers, Common Ringed Plover and a few Gannets out in the bay. The track then follows the coast-line which takes you past the end of the runway, low grassy scrub dominates the landscape and where large outcrops of rocks break the skyline all along the coast. 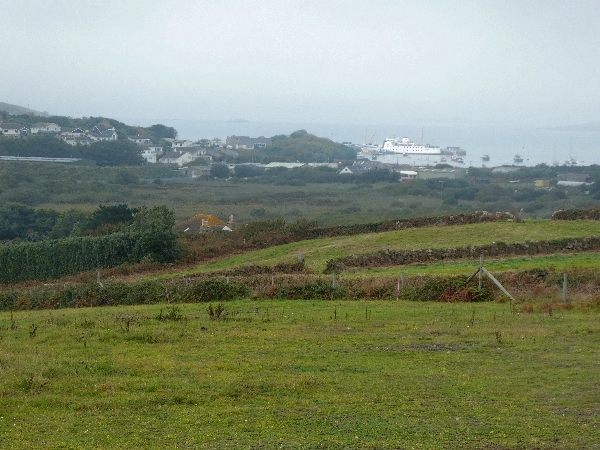 Northern Wheatear were sparsely dispersed along the path which took us very close to the airfield where at least 6 more Northern Wheatears were found. We followed the track into Old Town and on the roof of the second house we found a Turtle Dove, at last, this juvenile bird had given us the run-around over the last few days. 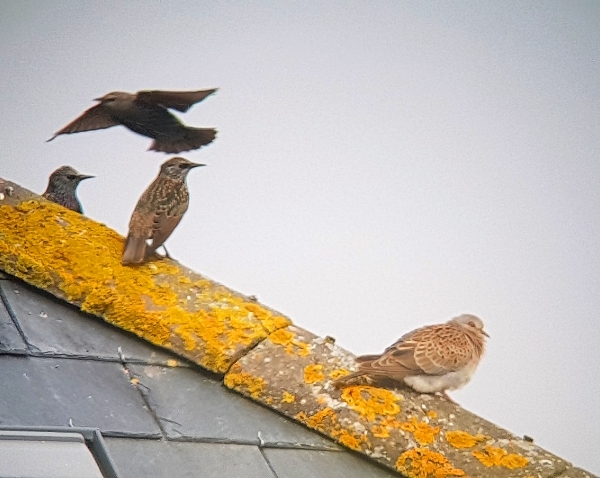 The Turtle Dove with a couple of Common Starlings

We scanned the beach at Old Town followed by a quick march up to the main entrance to the airport because a Buff-breasted Sandpiper had been relocated near the hangers. Unfortunately for us a helicopter flushed all the birds on the airfield just before we got there. So, we marched back down the hill to Old Town where lunch was taken, we ate a sandwich at the café on the beach front.

More news of the Buff-breasted Sandpiper, it had reappeared on the airfield, so off we went again. This time the bird stayed put and we had excellent middle-distant views of it. All flights had now been cancelled due to the fog, this was unfortunate for 4 of the group because now they would have to take the boat with us at 4pm. 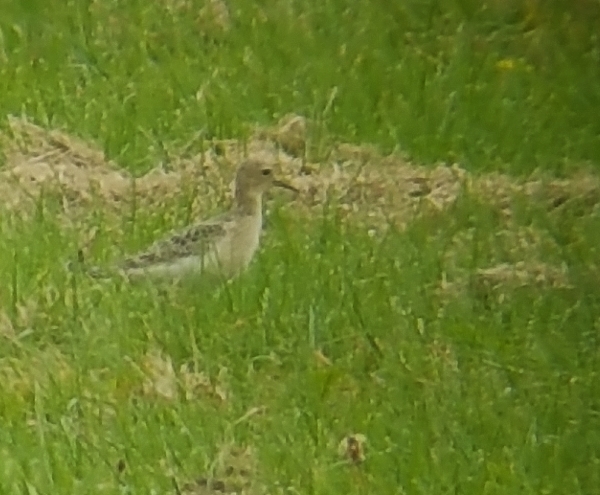 a record shot of the Buff-breasted Sandpiper

A quick look in the churchyard at Old Town provided nothing new so we left Harold Wilson in peace (the former UK prime minister is buried there) before we returned to our guest house to get ready for our departure. 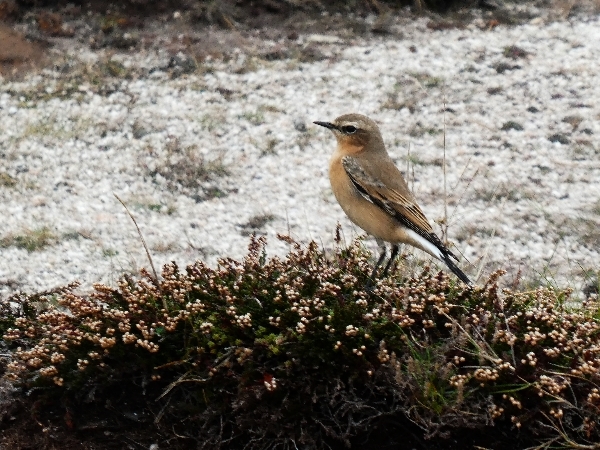 one of the many Northern Wheatears seen today

The crossing was a treat indeed, the sea was ‘mirror calm’ you could see for miles, the mist that shrouded the islands did not cover the surrounding sea, it was a real treat. We listed many birds and had wonderful ‘birds in action’ sessions when we saw both Great and Arctic Skuas chasing Gannets, Terns and Gulls in order to steal their catch. Many pods of Harbour Porpoise were seen too as well as a small number of Grey Seals. Occasional Manx Shearwaters passed by and a real treat was a Sooty Shearwater which flew across the front of the boat.

We also saw Kittiwake, Guillemot, Razorbill, Puffin and some of us saw a pair of Pomerine Skuas. Many ‘birders’ were watching from both sides of the boat, those on the opposite side of the boat to us saw a Grey Phalarope and few more Puffins.

The boat docked at 7pm just as it was getting dark and after 30 minutes of luggage chaos we all departed to our respective destinations. The trip was now finally over, everyone had had a great trip and we were all going home happy.

For me it was great to return to the Isles of Scilly after a 16 year break, they haven’t changed, they still retain their unique beauty and tranquillity. The birding isn’t as good as the heady days of the past, but there are still ‘goodies’ to be had.

Apart from the ‘uncommon ‘ migrants that we managed to see, such as: Tawny Pipit, Lapland Bunting, Pectoral & Buff-breasted Sandpiper, Red-breasted Flycatcher, Rose-coloured Starling and Whooper Swan there were several that we missed. These included:  Yellow-browed Warbler, Firecrest, Common Rosefinch and Red-backed Shrike. Which shows that it is an interesting and an exciting place to visit at this time of the year.