It just keeps on getting better and better, the weather, the birding and our findings! We had a very long day today with an early start which was necessary because we needed to get above the tree line in the Vrondous Mountains at dawn, but it was well worth the effort.

We left the hotel at 5:30am and set off for the Vrondous Mountains via the town of Serres, we knew it would take just over an hour to get there and as it was a Sunday progress was quick. We saw Little Owl, Turtle Dove, Hoopoe, Jay and Golden Oriole along the way.

We climbed steadily out of Serres and eventually came to a spot above the tree line where we had seen the elusive Rock Partridge during previous tours . It was a gorgeous morning, a clear sky, no wind a slight chill in the air but by no means cold and the scenery was stunning! 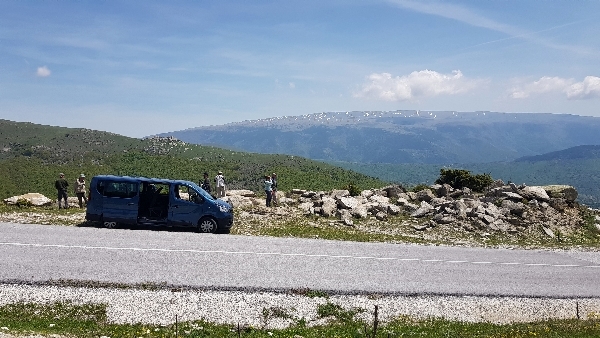 a view at the top of the Vrondrous Mountains

We saw Woodlark singing from a telegraph wire, lots of Northern Wheatears, Woodchat and Red-backed Shrikes, we could hear Hoopoe and Cuckoos calling in the distance. Common Whitethroat and Cirl Buntings went on the list and Linnets, Goldfinches, Greenfinches and Chaffinches were seen.

We walked along the road making our way a little higher and then we heard the Rock Partridge calling, our efforts redoubled as we scanned the hillside in the direction of the call. We found a male Common Rock Thrush sitting on top of bush, it was distant but unmistakeable. Then two Rock Partridges were seen, they were a lot further away than anticipated, the call they made carried a long way. 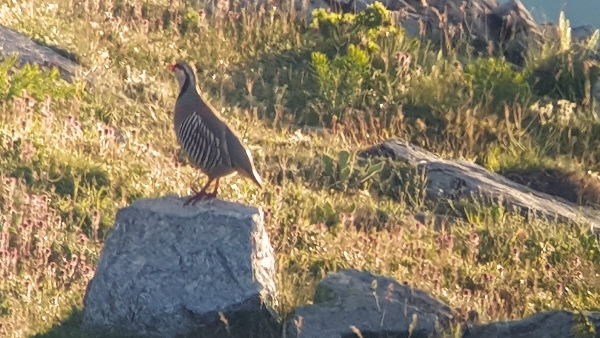 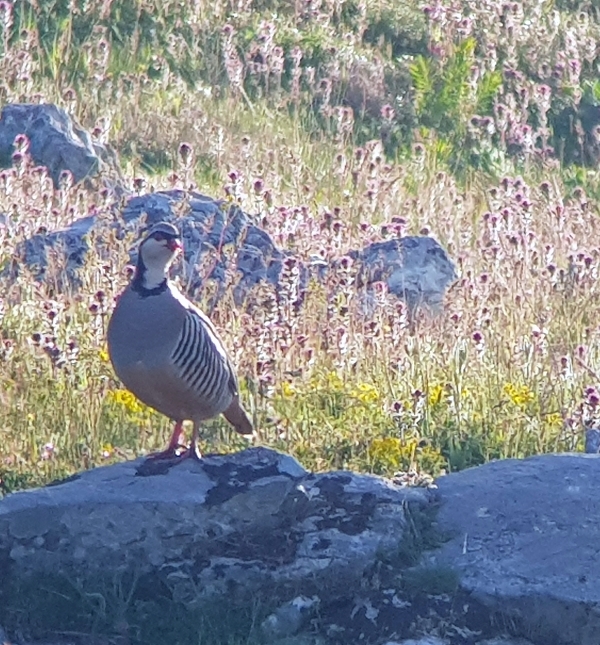 We enjoyed the sighting and all ,of us got excellent views in the scope, then another call came from below and a second pair of Partridges was found, also quite distant but visible. After our success we walked back to down to the buses and ate our packed-breakfast and took a warm drink from the thermos. We watched many Red-rumped Swallows and House Martins over head and added Mistle Thrush and lesser Whitethroat to the list. 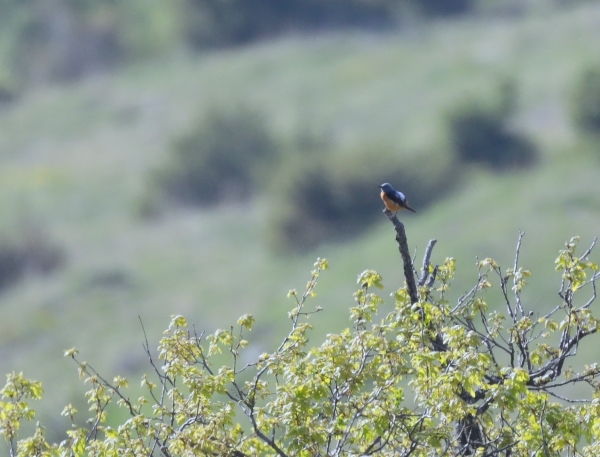 We then drove further into the mountains near the Lailias Ski Centre and took a walk along an escarpment below some rocky cliffs. Over the next hour we enjoyed some magnificent views, found some interesting wild flowers, a few Butterflies and some mountain birds. Rock Bunting was a main target species which we did not catch up with until nearly the end of the walk. 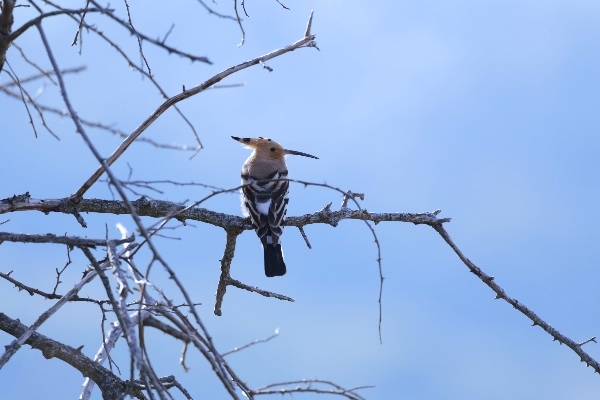 We watched apair of Peregrine Falcon circling around their nest site, we found a Black Redstart, Coal Tit, Blue Tit and Great Tit but not the Crested Tit we hoped for. Roe Deer went onto our mammal list together with Red Fox seen earlier. On the way back from our walk we saw a few raptors high in the sky, Common Buzzards and Short-toed Eagles were noted. Our last bird of the walk was a very confiding Firecrest, although one or two of the group had seen Common Crossbill. 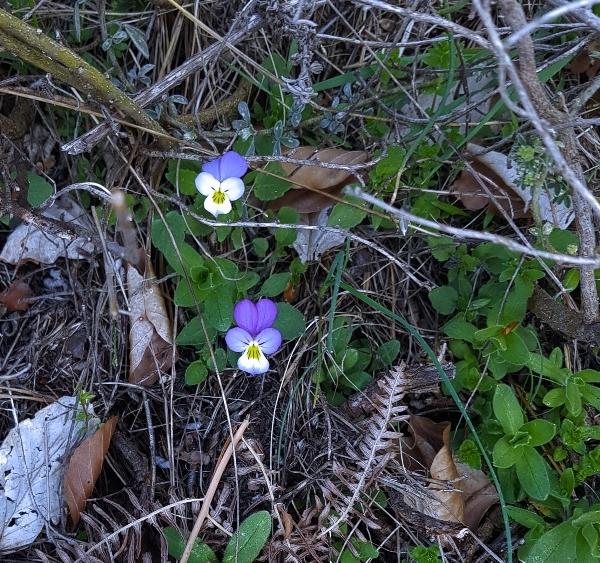 We then searched the beech woodlands from along the road for woodpeckers. We recorded a party of four Marsh Tits (initially thought to be Willow Tits), Dancho saw a Grey Wagtail along a mountain stream and heard Ravens overhead, but we never saw a woodpecker. 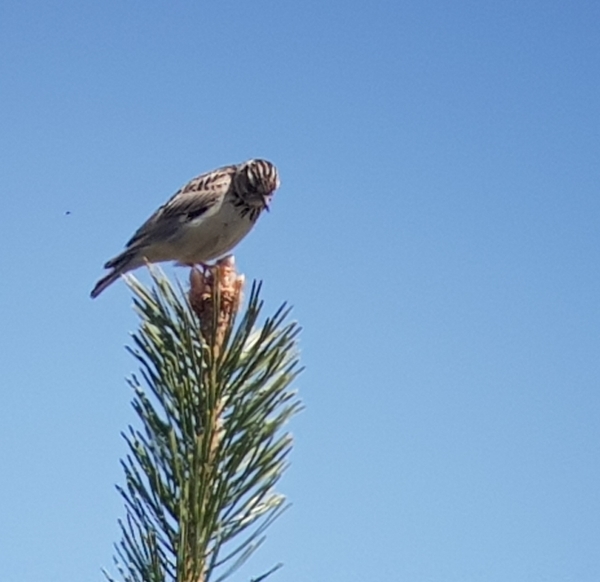 Woodl;ark at the Ski centre

For lunch we parked at the Ski Centre but before we sat down to eat we went for a walk around the site and made a circular walk around the buildings and tracks. A Woodlark sang from on top of a pine tree and a Black redstart dashed about near a derelict hotel. 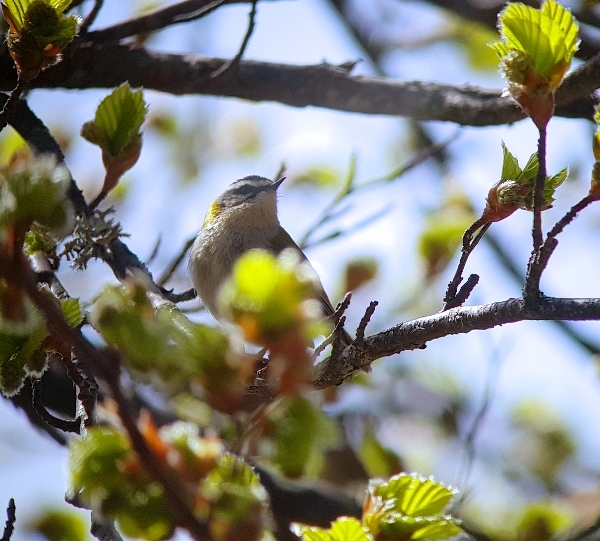 We watched yet another Marsh Tit just before Dancho thought he heard a Semi-collared Flycatcher. He ventured into the pine woods to have a quick look and put up a Black Woodpecker!!  Wow, the bird perched not too far away and was partially visible on the side of a tree before it flew off. We ate lunch in lovely sunshine and watched Common Buzzards, Ravens and Dancho found a Tree Pipit. From there we made our way back down the mountain stopping a couple of times to look for other species. Our first stop produced Mistle Thrush and a few Common Swifts, we were hoping for Pallid Swifts but not see, Dozens of House Martins were coming down to collect mud from a puddle on the gtrack and a Woodlark sang the entire time we were there. We did se apir of Echard’s Wall Lizards just before we left. 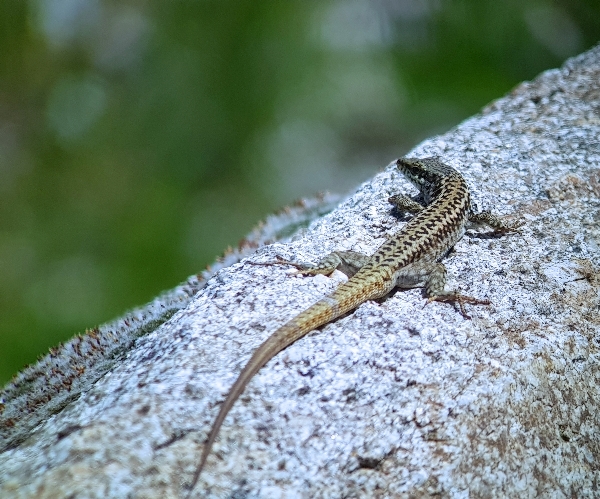 Our next stop was to look for Bonelli’s Warbler at a roadside woodland, we parked on on a grass verge and looked and listened. We came up with a pair of Subalpine Warblers, some nice flowers and a few butterflies but not the warbler.

On the outskirts of Serres we stopped for a well deserved coffee and ice-cream before driving to the village of Paleokastro where we took a track to some old quarries to look for Icterine Warblers.

We spent a lovely hour there, enjoying the warm sunshine, a gentle breeze and e wildflowers were terrific, especially the poppies. 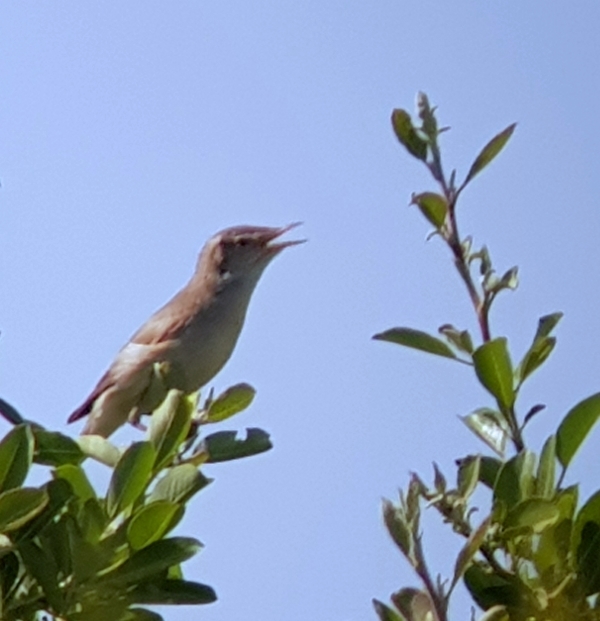 We watched Bee-eaters, Black-headed Buntings, Olivaceous Warblers, Linnets, Goldfinches, some distant Buzzards, Kestrels, Short-toed Eagles, White Storks and some lovely butterflies. We never had a sniff of an Icterine Warbler but it was beautiful out there.

We got back to the hotel around 5:30pm about 12 hours after we had left, so a nice cold beer on the terrace was essential! Watching the birds on the lake was enjoyed by all of us, we found a perched Lesser Spotted Eagle, we had a male Golden Oriole in the grounds of the hotel, we saw Turtle Doves on the wires and found a flock of some 40+ Ruff feeding on the grassy banks of the lake. With all the water birds spread out in front of us as far as the eye could see, it looked like a Peter Scott painting, it was a magical sight. 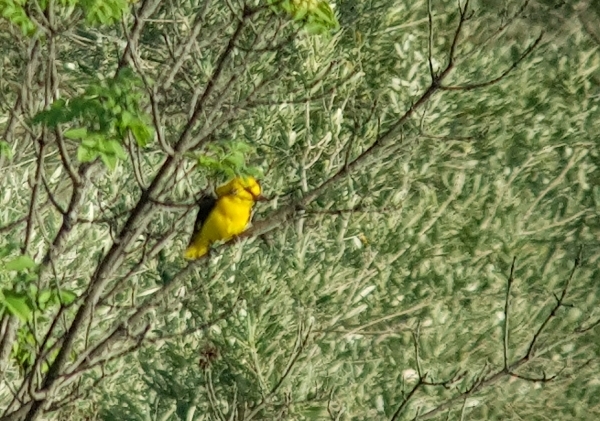 record shot of a Golden Oriole in the garden