It was yet another beautiful day, but it did get quite hot in the middle of the day which forced us to stop for coffee and ice-cream at least twice!! Before breakfast we made a second visit to the Quay (jetty) at Mandraki where we spent another magical hour watching a wildlife spectacle as thousands of birds set off on their daily quest to find food for the day. 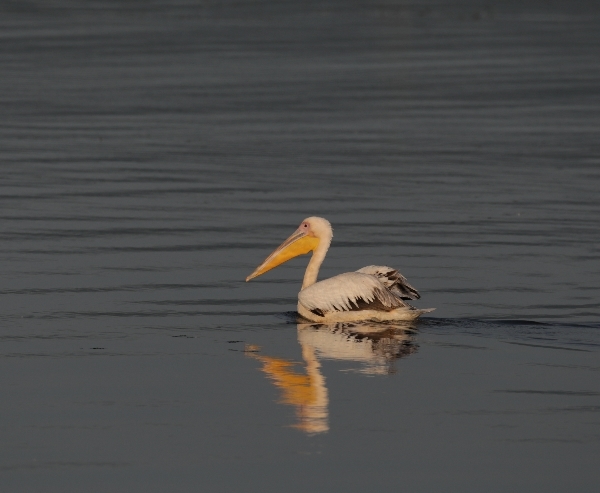 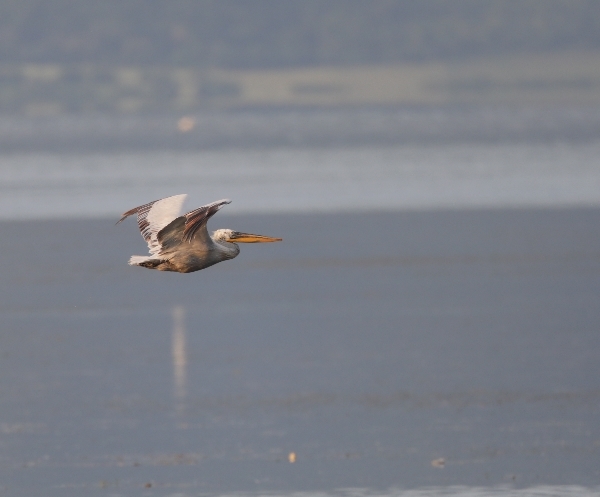 After breakfast we set off for the southern side of the lake where we intended to walk along a track to yet another disused quarry. Along the way we saw Little Owl, Green Woodpecker, Lesser Grey Shrike, Bee-eaters, Common Buzzard and a Jay.

It was already warming up when we got to the track and near the entrance we saw Eurasian Spoonbill, Little Egret and Grey Heron in a small pool and lots of Bee-eaters flying around. Our main target bird was the Olive Tree Warbler but we knew many other species would be around, we hoped to spend 2 hours walking down to the quarry and back. 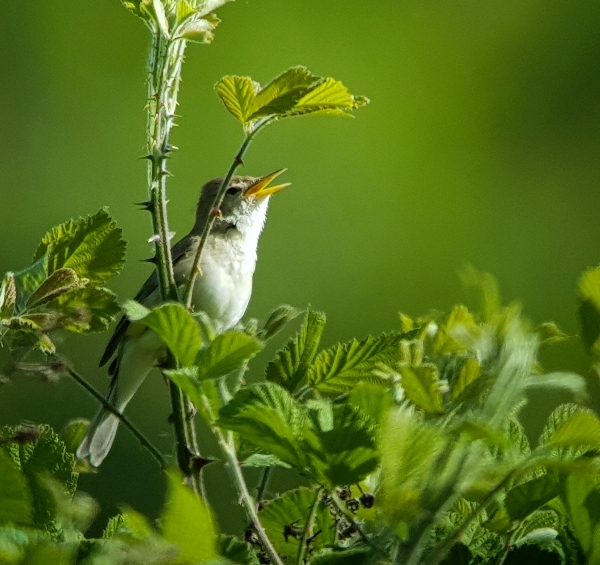 Bird song was coming from every direction, Nightingales, Warblers, Bee-eaters, Buntings, Hoopoe, Golden Oriole, Turtle Dove, Cuckoo, Swallows, House Martins and even a pair of Little Ringed Plovers were calling as they flew over the stream below us.

Shrikes seemed to be all over the place, Red-backed, Woodchat and our first Masked Shrikes appeared in the bushes on either side of the track. We also saw Common Redstart, Olivaceous Warbler, a fly-over Hawfinch, Short-toed Eagle, Booted Eagle, Lesser Spotted Eagle, Common Buzzard and a Common Kestrel. 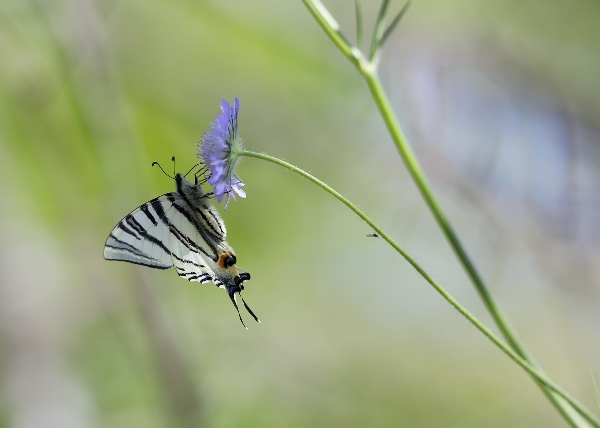 Butterflies were all over the place too, one in particular aught our attention and that was the diminutive Little Tiger Blue. We found several Thread Lacewings and lots of other flying insects. The Broad-bodied or Scarlet Chaser went onto our huge dragonfly list of four species and dozens of Cock Chafers. 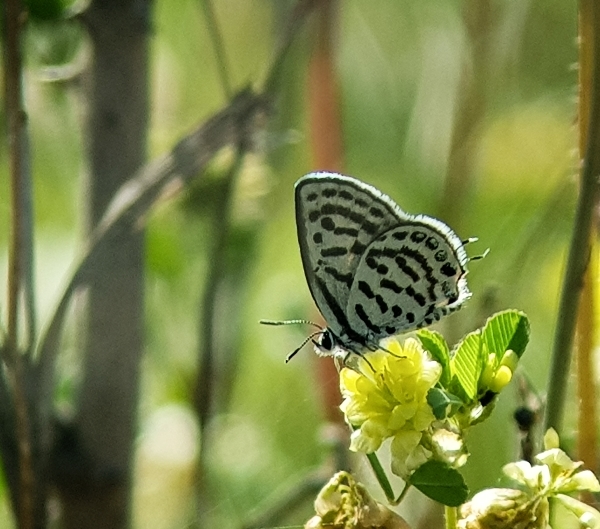 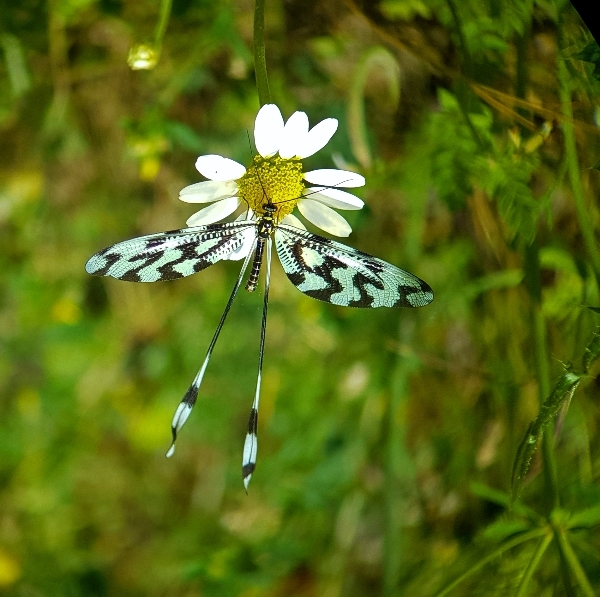 We reached the quarry and scanned the rocks for more species, we found Black-eared Wheatear an Hermann’s Tortoise, Woodchat Shrikes (male displaying to a female) and not much else. Then Dancho pulled out two superb species within a five minute spell, first he found an Ortolan Bunting singing from a distant bush then a few minutes later he discovered a massive species for our list, a Eurasian Eagle Owl. What a purple patch, two great species and both seen extremely well by all of the group. 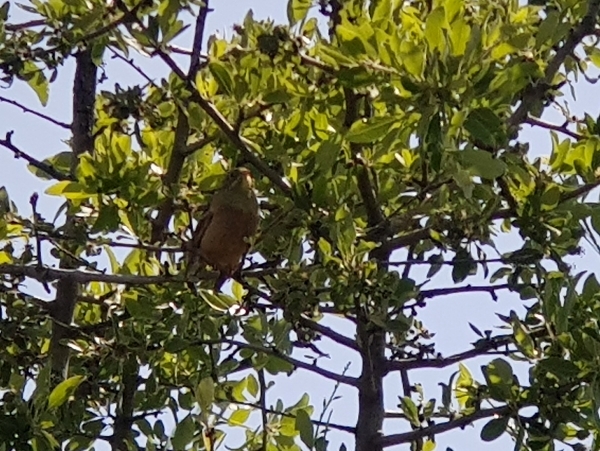 record shots of Ortolan Bunting above and Eagle Owl below 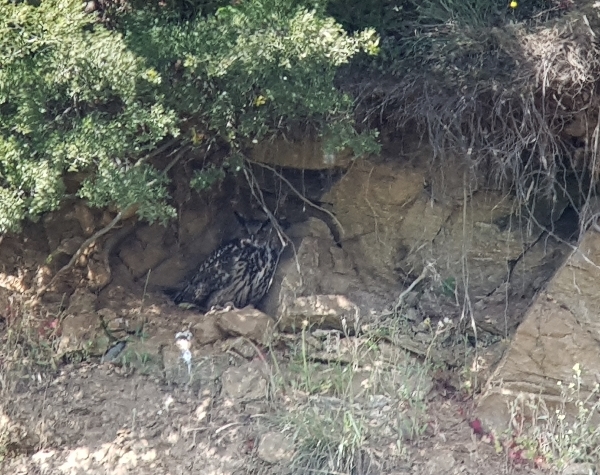 On the way out of the valley we stopped to look for Olive Tree Warbler in the olive groves. We heard at least three birds and we staked out all three of them, getting glimpses of two of them, but not good sightings and none of them perched. Oh well, it is a difficult species to see and you can’t win them all.

After that we had great views of Common Nightingale, Masked Shrike and Olivaceous Warbler, we saw Lesser Spotted, Short-toed and Booted Eagles once again and we finished off our walk back at the vans well pleased with our morning’s sightings.

We drove into Lithopotos to buy lunch and we ate at the tables outside a small supermarket, we then drove down to the dam and sat on the terrace of a restaurant that overlooked the water around the dam and some of the lake. We watched Pygmy Cormorants, Great Crested Grebes, Squacco Herons and Dalmatian Pelicans as we sat drinking our coffee. 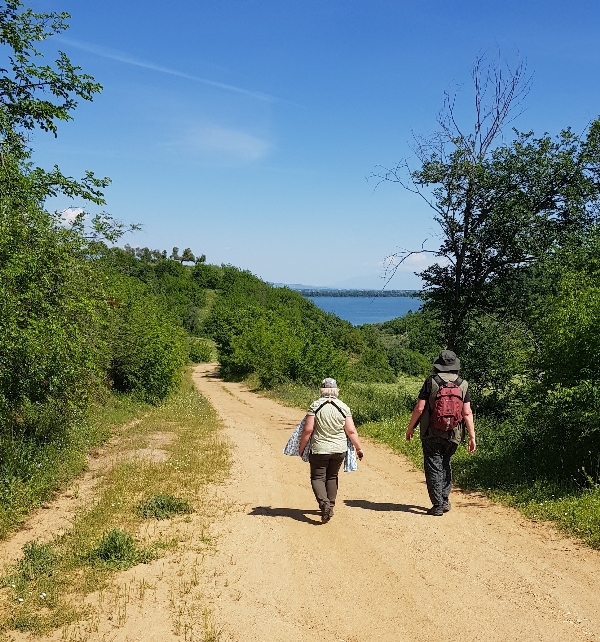 For the rest of the afternoon we spent our time visiting various sites along the southern shore of the lake. In particular we walked along a track not far from Lithotopos where we experienced a most enthralling wildlife event. Just as we got out of the bus at the beginning of the track Mai saw the grass moving on the bank at the side of the track. We soon discovered that it was two male Horn-nosed Vipers (one of the most venomous snakes in Europe) fighting one another for territory or a female perhaps. 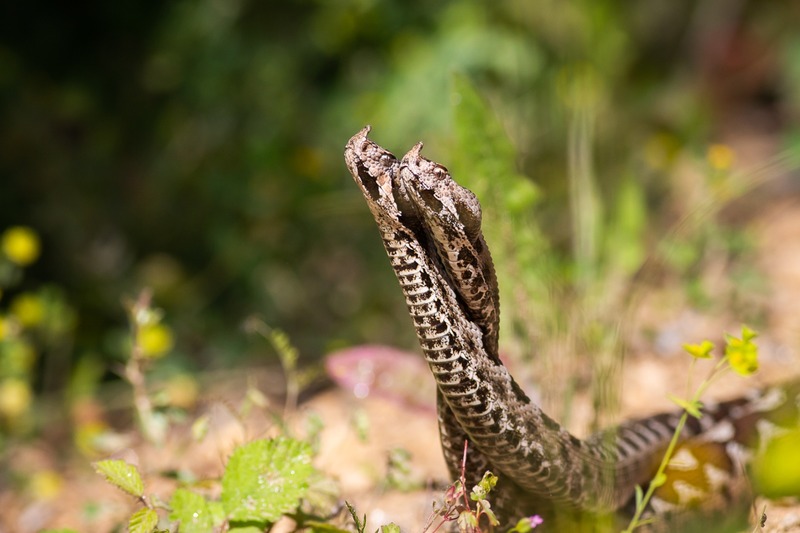 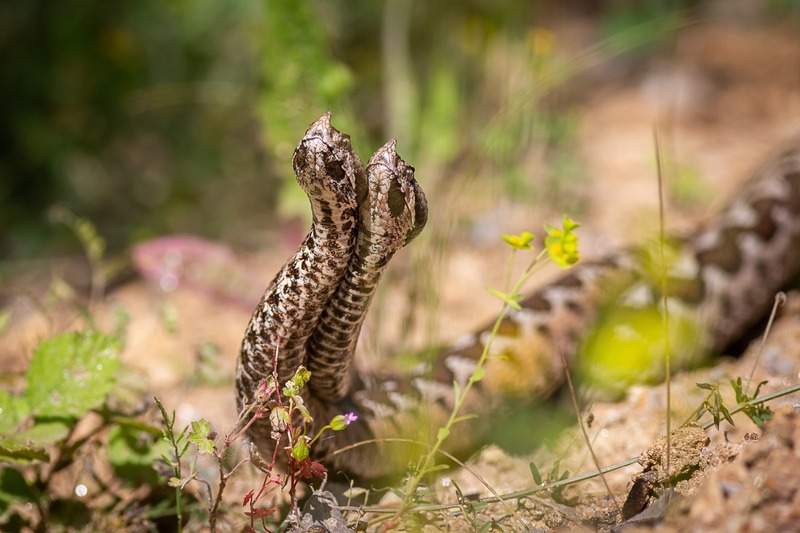 It was mesmerising, the snakes didn’t give us a second thought as they ‘battled’ their way towards us, they would rise up twisting around one another and then falling down only to start once again, they were completely entwined the whole time we were there.

Well after that wonderful experience everything else seemed to be anticlimatic. We walked uphill along the track, it was hot and dry, we saw a few raptors. Black Kite was new for the trip, we also saw Honey Buzzard, Booted Eagle and the usual Bee-eaters, Golden Orioles, Olivaceous Warbler etc.

Our next stop was next to a roadside pool, we could see at least three Great Reed Warblers, a perched Common Buzzard, whilst flying around us we saw Lesser Spotted Eagle, Grey Heron, White Storks and Eastern Olivaceous Warbler. Across the road we had a wide panoramic view of the lake and on two spits of grassy headland we saw some Yellowed legged Gulls with two Caspian Terns, a pair of Gadwall and both Little and Great Crested Grebes.

Driving round to the village of Kerkini we visited the mouth of the Kerkinitus River where a few reedy ponds produced very little. After a stop in Kerkini we continued our circumnavigation of the lake as we returned to the hotel.

An after dinner walk produced yet another fantastic wildlife encounter. We went out in the dark to listen for owls and nightjars, we heard only Little Owl. But we also heard the ‘haunting howling’ of Golden Jackels. Not only did we hear but they holwed not 20 meters from where we were standing, we walked across a road and into a filed to try to see them but they obviously heard us and dashed away. But what a piece of excitement to finish off another great day at Lake Kerkini.

An addition to the day's sighting was made by Mike Hails who stayed behind at the hotel today for recuperation. He saw 39 species from his hotel balcony in two hours this morning, how fanatstic was that? He added more species later in the day and ended with 50 species - this just shows you what a wonderful spot our hotel is situated in, overlooking the fantastic Lake Kerkini.