WEATHER: A change today, it was cooler with more cloud. Temp 20C

The deciduous woodlands above the village of Ano Poroja are a good site for woodpeckers especially the Black Woodpecker so we set off straight after breakfast and made the journey in under 20 minutes. We past through open meadows and stopped to search for Barred Warbler which was still missing from our list, but without success. We did plenty of other birds out in the meadows, namely Black-headed Bunting, Red-backed Shrike, Olivaceous Warbler and plenty of Corn Buntings. 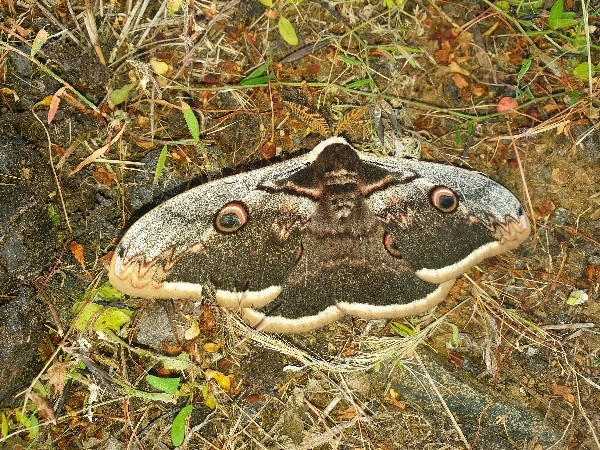 The woodlands were much quieter than we expected, in fact it was like walking in an English woods, we heard Robin, Wren, Song Thrush and Chaffinch and we saw Grey Wagtail along a stream. We did both Green and Grey-headed Woodpeckers but we had no sighting of them. 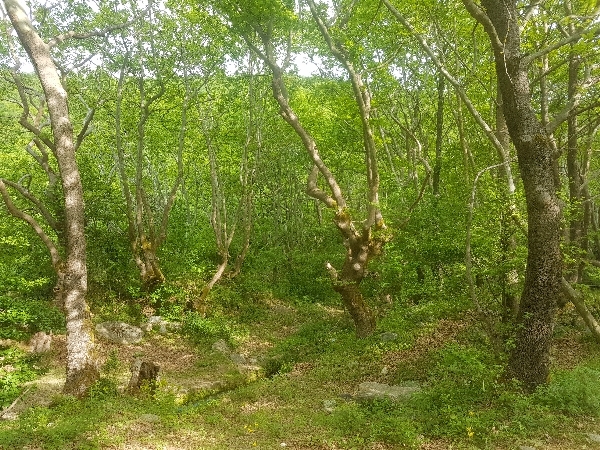 We the woodland after less than an hour and set off to Veronia to try some riparian woods where we had a chance to look for water birds at the same time. About 3km along the road Dancho pulled over quickly and stopped the leading bus, he had seen a falcon on a telegraph wire and on inspection we saw that it was our first Red-footed Falcon of the trip, a smashing, colourful female bird. 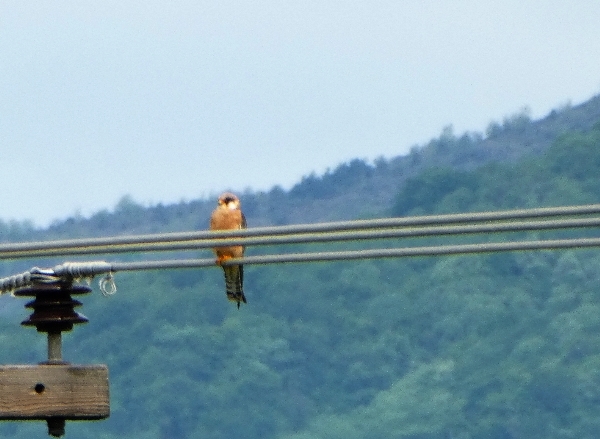 record shot of the Redfooted Falcon

At the riparian woodland near the village of Veronia we heard a Grey-headed Woodpecker as soon as we stepped out of the buses and within a couple of minutes we had all seen it in the scope, fantastic! We saw a Green Woodpecker virtually in the same place before we began our walk along a track that ran parallel to a small marsh and through a wooded area.

Before long we were watching a pair of Great Spotted Woodpeckers bringing food to a nest hole where we could hear the sound of noisy chicks begging for food. A Common Cuckoo showed well, followed by a Common Nightingale, we also saw some nice butterflies the Eastern Festoon went down particularly well with the group. 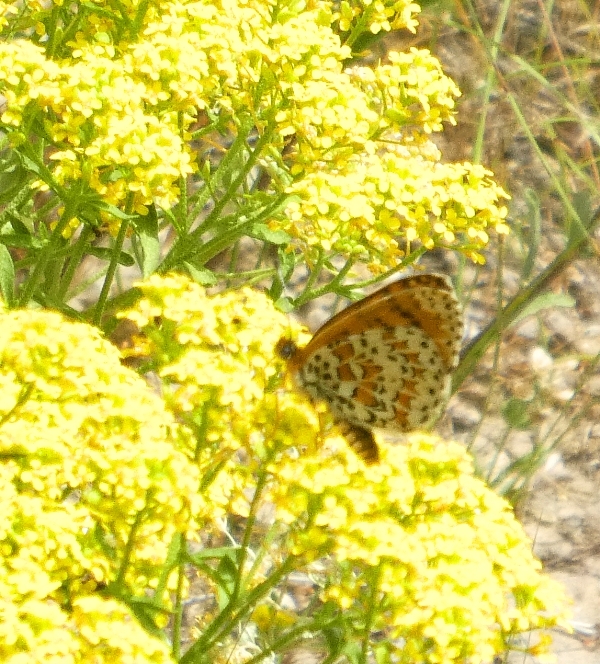 A second part to our walk produced fewer birds, but a noisy pair of Levant Sparrowhawks kept us entertained for a while before we drove back into town for a coffee and a cake. We then drove to a picturesque ravine near the main quarry at Sidiroastro to eat our picnic lunch whilst sitting at a large sheltered picnic table. 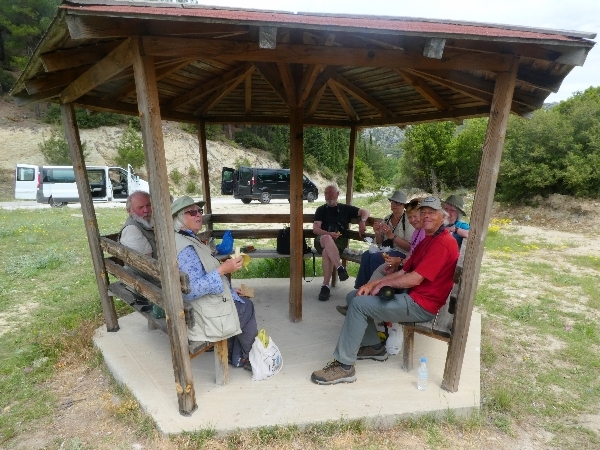 During lunch we saw many Jackdaws, Common Raven, Honey Buzzard and a distant falcon which we decided was most probably a Eleonora’s Falcon. Several butterflies went onto the day list including: Ilex Hairstreak, Queen of Spain and Lesser Spotted Fritillary, Small Copper and plenty of Clouded Yellows. We scanned the cliff faces of the ravine looking for Rock Nuthatches but only found Blue Rock Thrush and Black-eared Wheatears. 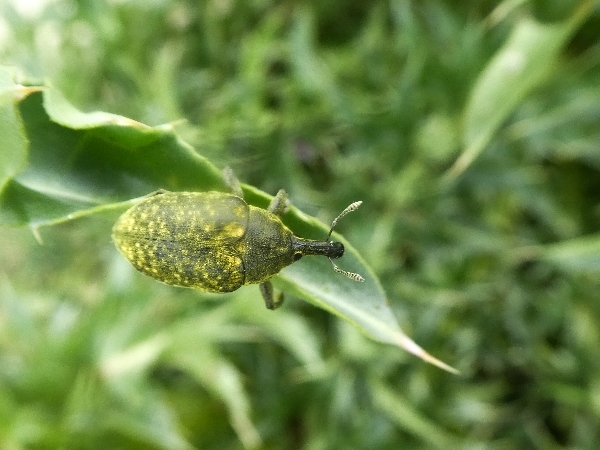 a species of weevil

We then drove into the nearby gorge to an old quarry workings from where we had much better views of the main rock face. After a short while we found an ‘active’ nest of the Rock Nuthatch, the parents were delivering food parcels to their youngsters on a regular basis, so we all had distant, but reasonable views of them. 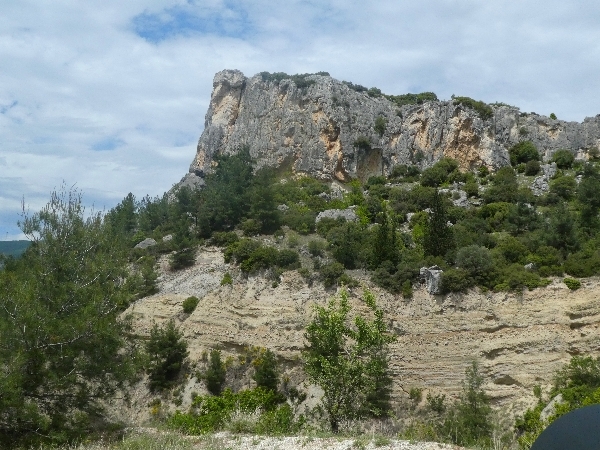 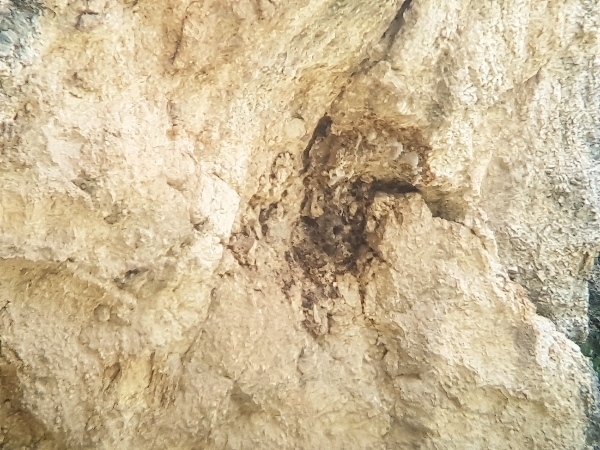 For the last two hours of the day we drove much further up the valley towards the village of Achladochori, we turned onto an old mining track and went a few kilometers into the hills. Our target birds of Short-toed Lark and Tawny Pipit were in the bag after a few minutes of scanning the scrub- strewn mountainside.

We spent time scanning higher up for the Ortolan Bunting and found a Golden Eagle, it was carrying prey. Then we witnessed some extraordinary behaviour of the Golden Eagle, the prey it was carrying was in fact a Tortoise!!! The eagle soared higher and higher, it then dropped the poor tortoise from about 100 meters up and both the eagle and the tortoise dropped like a stone. The eagle then fed on the smashed remains. I had heard of such behaviour but none of us, except for Dancho, had ever seen it. 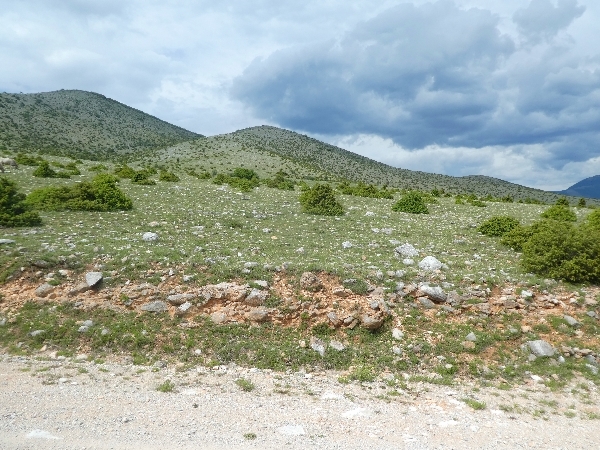 the scattered scrub where we saw Tawny Pipit, Short-toed Lark and Ortolan Bunting

Shortly after the Eagle experience I drove my bus up the hill with one passenger, I intended to scan a different area but stopped at a drinking trough that had several birds bathing and drinking in it. Two of the birds were Ortolan Buntings, wow, our target bird in sight and the group were down the hill. I quickly fetched the whole group up and yes, you guessed it, the buntings had gone. 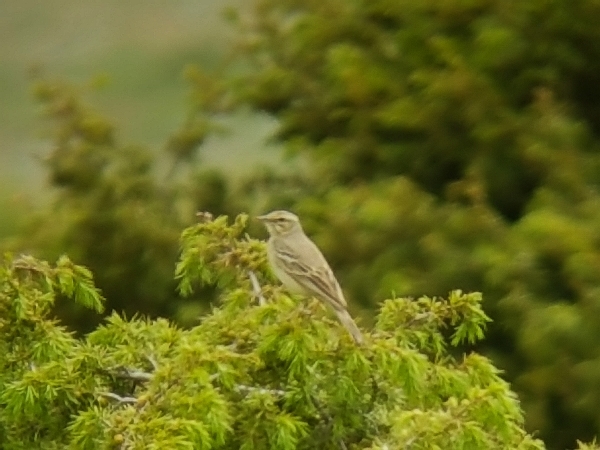 We watched the trough for a while, Greenfinches, Linnets, Cirl Buntings, Chaffinches and Stonechats turned up but not the bunting. We did find a consolation bird in the shape of a Little Owl, our first of the trip. It was time to go so we drove back to the hotel arriving just before 6pm. The tour was over there would be no time for birding tomorrow we have to leave early for the airport.

The birdlog was called after dinner, we had recorded 171 species, a great total, and an endorsement of how good this area is. A vote for ‘Bird of the Trip’ left us in no doubt of how significant the finding of a Terek Sandpiper was.