RECENT SIGHTINGS AND HAPPY BIRDING FOR 2022

HAPPY NEW YEAR ONE AND ALL

Dawn and I spent a lovely Christmas in Kent staying with Dawn's daughter Sopie and her husband John, we had a great time there.

The weather all over Christmas was awlful, dull, dark, wet and windy days. In fact December seemed to be dull for most of the month, I think 23 days were dull with no sunshine, no wonder many peopel get depressed.

I managed to get out on Tuesday the 27th December to visit a local park called Leybourne Lakes near West Malling. The lakes are very commercial with fishing, boating etc and hundreds of people visit everyday. Some of the lakes are a little secluded and have some good birds on them, I saw many Tufted Duck, Pochard, Mallard, Shoveler and Gadwall. Both Great Crested and Little Grebes, Cormorants and many Black-headed Gulls also fed out on the Lakes.

One lake lies separate from the others and a little off the beaten track. Brookland Lake is accessed by foot via a path that takes you over a railway line, the lake is quite large with a causeway that bisects the water. Many fishermen were set up along the banks of this lake but it still held many ducks.

As I was walking back towards Leybourne Lakes I picked out a beautful full adult male Greater Scaup! It was a fair way off and the light was attrocious but I managed to get a few record shots. 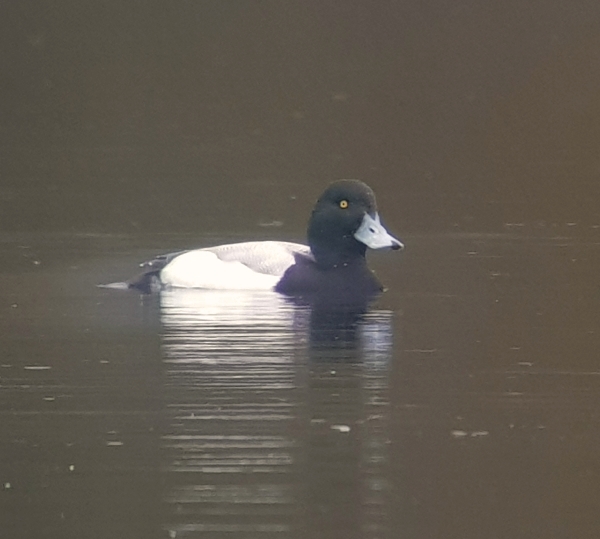 male Greater Scaup in poor light - you can just make out the green sheen to its head and the vermiculation on its greyish-white back. 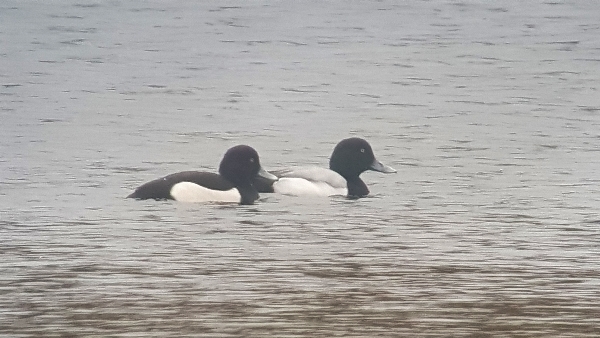 Greater Scaup with a male Tufted Duck for comparison 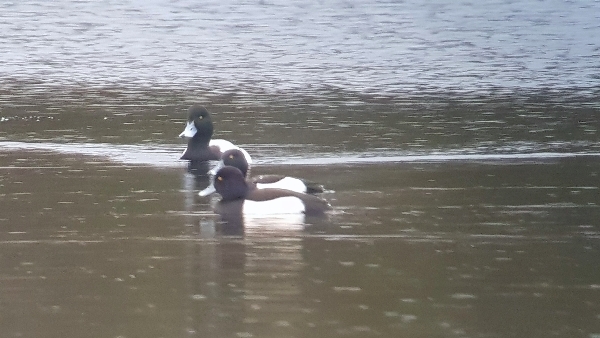 in this picture you can see the black 'nail' on the tip of the Scaup's Bill.

Yesterday was my birthday, the 30th of December, Dawn and I drove down to Dorchester for a birthday walk and lunch. Once again it was dull, overcast, wet and windy. We also drove through thick fog as we crossed the hills just south of Yeovil on the A37.

The Water Meradows between Charminster and Dorchester always hold a good variety of birds throughout the winter especially a wet one! Recently, up to five Russian White-fronted Geese had joined the Canada Geese and Mute Swans in the these meadows, so I stopped off for quick scan along the way.

An old guy was scanning the meadows when I arrived, he told me that the geese were not there, but I looked at his optics and soon realised that he hadn't much chance of seeing anything through those pre-war bins. So, as he walked off  I set up my scope and within a couple of minutes I picked out two Russian White-fronted Geese! Admittedly, they were hunkered down most of the time and very hard to see, but they did pop up in full view from time to time. I only saw two of a possible five. 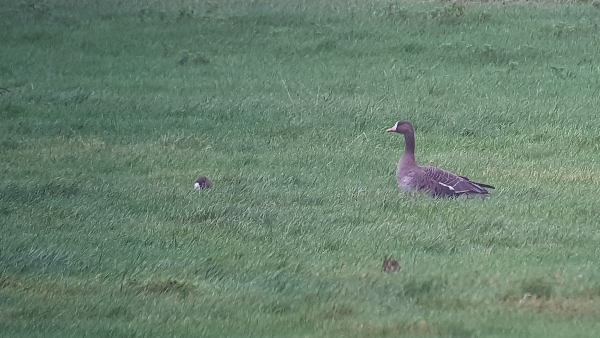 Russian White-fronted Geese, the one on the left is quite well hidden, no wonder they were missed by the old fellah! Can I really call him an old fellah as I celebrate my 68th year in existence?

The meadows were covered in Gulls, I never had time to sift through those, but I did see Wigeon, Gadwall, Teal, Shoveler and Mallards as well as Mute Swan, Canada Goose and a single Barnacle Goose of unknown origin, should I tick that one? 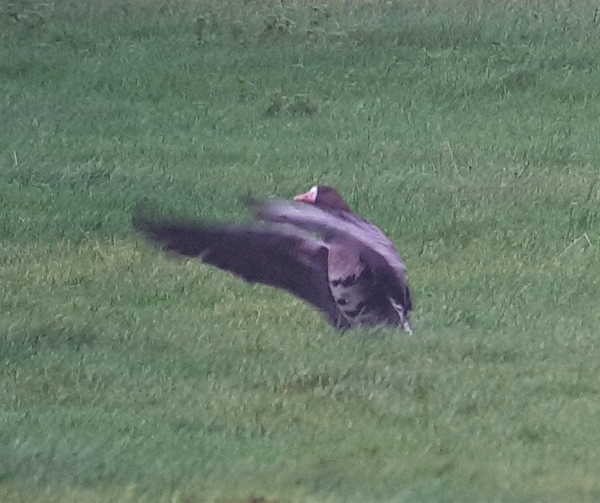 just look at my belly barring - even though the barring is quite thick and heavy on this bird it doesn't make it a Greenland White-fronted Goose because of the shorter pinkish bill and the distinctive light edges to the wing covets making its back look quite light in colour.

The rest of my birthday was spent walking along a new found trail along the river Frome and then a sojourn into town looking for somewhere to eat. A very enjoyable morning and early afternoon in Dorchester concluded at 2pm as the rain and wind started to increase. 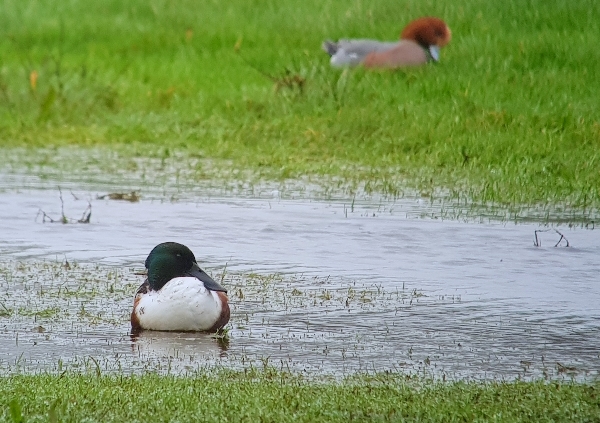 a male Shoveler  with a blurred Wigeon - Charminster Meadows 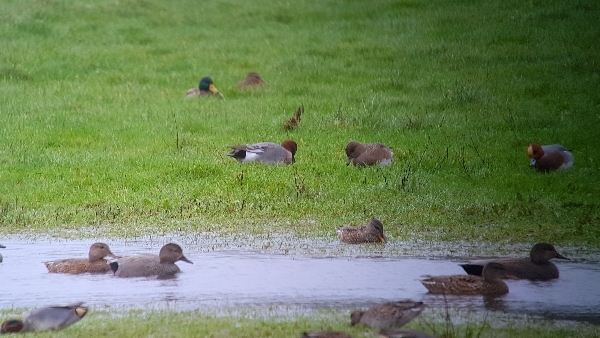 happy new year to you all!!

Thank you for following my blog this year, it has been a bit depleted of late due to the weather and the Covid problem! In fact it has been a preety poor year for birding, especially the Autumn Migration which seemed non-existsent at times and of course none of my international tours ran at all.

The blog should flourish in 2022 as I hope to resume the WINGSPAN programme of tours, starting with the Somerset Levels and Dorset from the 2nd January.

Watch out for a report on my NEW YEAR'S DASH to see 100 species in Dorset on January 1st. I shall be donating 50p per species spread over a number of local conservation charities.  Watch this space tomorrow!!!

Best wishes, health and happiness for 2022