RIVER CHRISTOS MARSH - EASTERN KALLONI SALT PANS - MESA MARSH - NAPI VALLEY - PLANTANIA The cold northerly wind continued, we had a cloudy day with some sunny spells, no rain but it was chilly.

As we draw nearer to the end of our holiday it is becoming harder and harder to find new species to see. All of the 'LESVOS' specialities are now in the bag but we are missing a few resident species and several regular passage migrants.

We had news of a singing MARSH WARBLER near the road bridge over the River Christos so we walked round there to take a look. The morning was perfectly still and bright some superb reflection images could have been taken of the waders on the marsh. We saw Kentish Plover, Curlew Sandpiper, Little Stint, Ringed Plover and lots of Lesvos common waders. 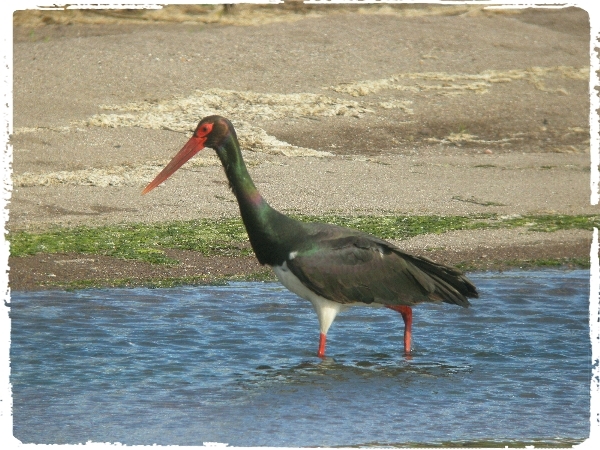 Black Stork seen on the pans and the Tsiknias River

At the bridge we listened intently for warbler but all we got was Olivaceous and Cetti's Warblers, Common Nightingale, Zitting Cisticola and Sedge Warbler.

Our main aim today was to catch up with a few species missing from our list, this included a couple waders, terns and gulls. So we visited the Eastern side of Kalloni Salt Pans to look for them. Despite not seeing anything new we had a good time viewing the 'pans' from an elevated hide. Four White-winged Terns joined a massive flock of Common Swifts in the air above the pans whilst several wader species were noted feeding in the pans. 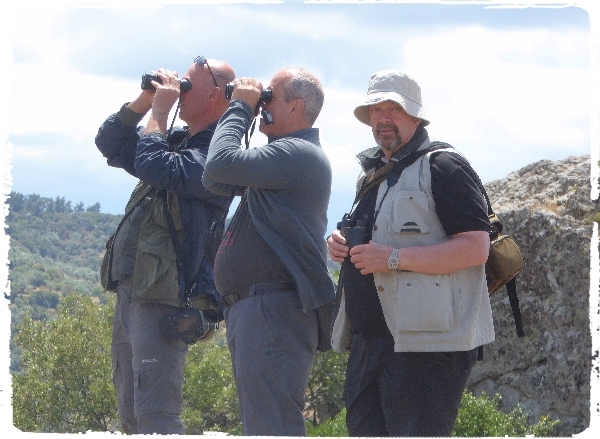 THE TRES AMIGOS -  Kevin, Peter and Nigel - the bulk of my tiny group this week

Mesa Marsh was not too productive, many waders had left, so just Wood Sandpipers and Black-winged Stilts remained with Mallards, Coots and Moorhens. Purple Herons seemed ever present as did Little and Great White Egrets, the long-staying Spur-winged Plover was still przentvacross the road in a small lagoon.

We crossed the raised causway towards Achladeri Pine Forest and stopped at the first track into the forest. Within  minutes  we found our target species, the Serin. Several were flying around but we had good views of oe female on the ground. 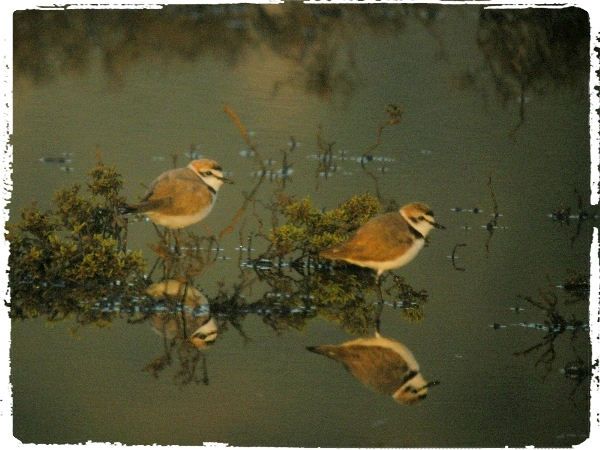 This could have been such a good picture but it is not sharp. Kentish Plover on the Christos Marsh this morning

From there we drove back towards Kalloni but turned off to the Napi Valley passing through Agios Paraskevi before visiting the ancient Kremasti Bridge at the start of the Napi Valley. We ate our picnic lunch at the famous bridge and birding wasn't too bad, Turtle Doves showed well as did Eurasian Hoopoe, Long-legged Buzzard, Short-toed Eagle and Red-rumped Swallows were breeding under a nearby bridge.

It was windy in the Napi Valley but we scoped Cretzschmar's Bunting, Eastern Black-eared Wheatear, Western Rock Nuthatch, Masked Shrike, Sombre Tit and several others, some very distant Red Footed Falcons (3) were our first for the trip and this sighting encouraged us to look for more.

By the time se teached the head of the valley we had amassed a sizable list, we turned onto a farm track and parked the bus. We intended to walk a well known track called Plantania and as we started out we found a superb male Red Footed Falcon sitting on  pylon, fantastic! 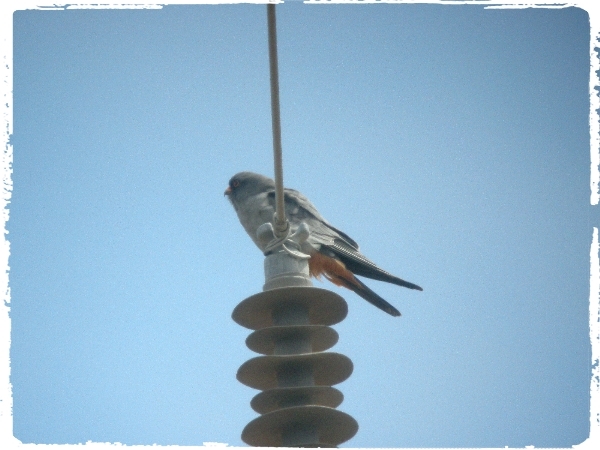 record shot of the first Red-footed Falcon of the trip

For the last hour we returned to the Kalloni Salt Pans where we found two more male Red-footed Falcons ss well as all the usual warblers. We then heard of a sighting of Collared Pratincole in the Alykes Wetlands at the back of the salt pans, so as we were near we shot round there and found the bird still present, a mini-twitch but this species had been thin on the ground this year.

We returned to the hotel with holes still in our checklist, so tomorrow, our last day, will be one of high hopes.