We had a fantastic day today, we saw 86 species with some great finds and we hardly left the Kalloni area.

The hotel is now providing a full-on breakfast at 6am which we took an advantage of and by 7am we were all outside watching birds on the Kalloni Pool. A Water Rail was our first find which was then followed by great views of a Great Bittern, this bird came right out into the open and fed for a quite a while, smashing. We also found a Subalpine Warbler and an Eastern Olivaceous Warbler, both were singing in the nearest tamarisk. Other bids seen were Little Bittern (2), Squacco Heron (7), Pruple Heron and Grey Heron. 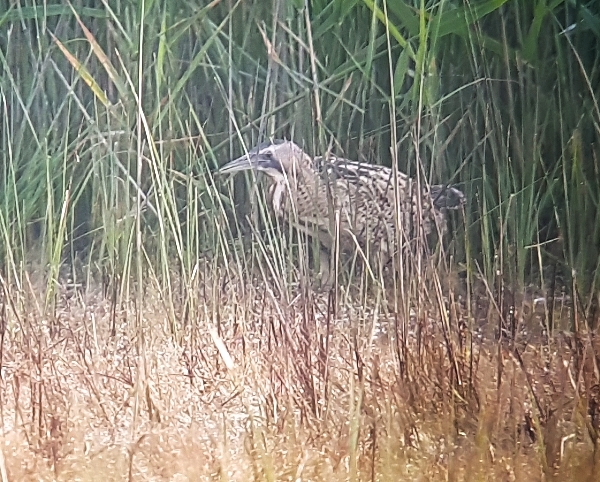 A short walk round to the mudflats of the River Christou produced sightings of Kebtish, Little and Greater Ringed Plovers, Little Stint (12), Greenshank and several Yellow Wagtails (feldgedd). Distant views of Grey Heron, Little Egret and Common Tern were also had. From the bridge over the river Christou we found a small number of Red-throated Pipits, we saw more Yellow Wagtails and distant European Bee-eaters, Common Shelduck and White Storks. Closer to us we found Sedge Warbler and Whinchat. 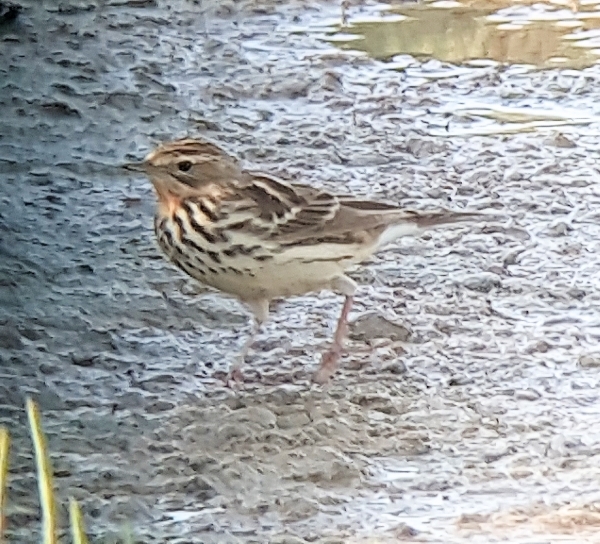 After the delivery of our minbus were now able to travel by road instead of walking so we all jumped aboard for a trip to the the nearby Metochi Lake. This lake has undergone some @improvement’ work, it has been dredged and most of its reed beds have been removd. So, the former glorious habitat hs been decimated but still we saw plenty of birds. We found two Little Crakes, a Little Bittern, Purple Heron and the usual Coots, Moorhens, Mallards and Little Grebes. We saw Common Swift, Barn and Red-rumped Swallows coming down to drink and Reed Warbler, Cetti’s Warbler and Common Nightingale were all singing. Golden Orioles could be heard in the distance and a Middle Spotted Woodpecker flew into a trip above us as we got back into the bus. 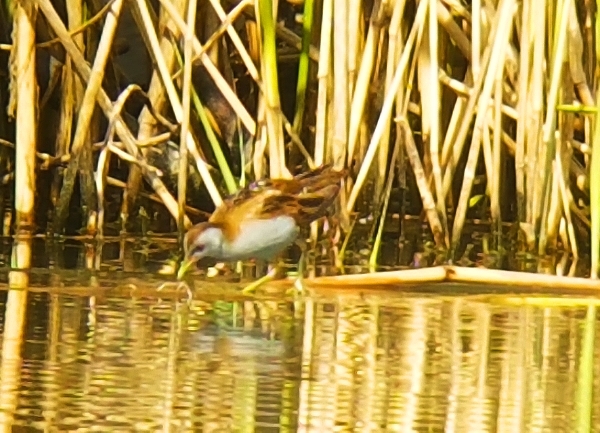 The Salt Pans at Kalloni are always a joy to visit, you never know what you might find! Although the number of birds present wasn’t very high we enjoyed some great sightings. The first of which was of a Peregrine Falcon which sat on an island eating a Black-winged Stilt! Greater Flamingos were not as numerous as in previous years neither were Pied Avocets or Wood Sandpipers. We stopped a number times before reaching Alykes Wetlands and we saw a good number of species:  Whiskered, Little and Common Terns, Temminck’s Stint, Little Stint, 21 Marsh Sandpipers, Ruff and Spanish Sparrows. A pair of Stone Curlews were nice to see and  distant Marsh Harrier could be seen. 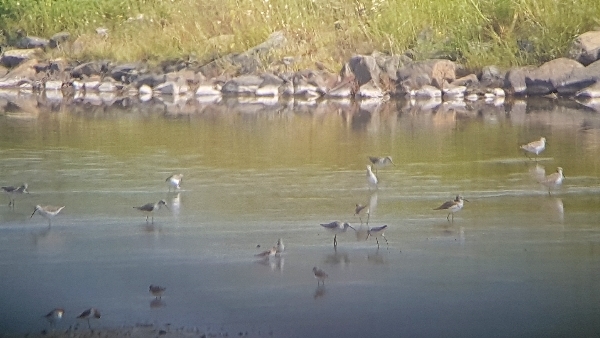 some of the 21 Marsh Sandpipers with a few Little Stints

At Alykes wetlands we saw very few new species so we drove round to the beach to each an early lunch. Butterflies were prominent sightings there, we saw Swallowtail, Painted Lady, Lesser-spotted Fritillary, Common Blue and Small Copper. 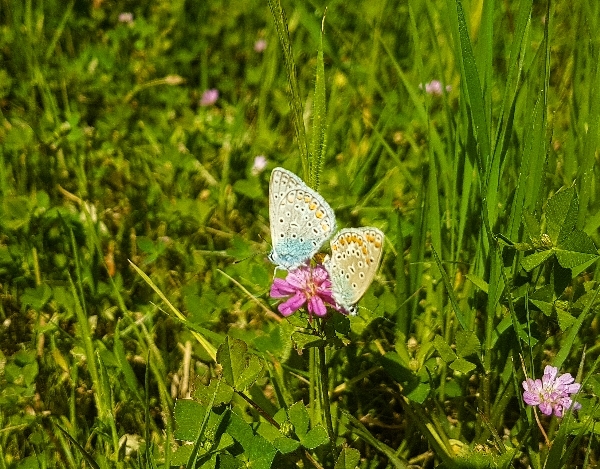 a pair of Common Blues mating

Our walk into a vast meadow with pools of water and a herd of Horses produced some good birds. Our first Black Storks, also Ruddy Shelduck, a single Gull-billed Tern and a small flock of 9 White-winged Terns flew over in the distance. Lots of Yellow Wagtails and smaller numbers of Red-throated Pipits were feeding in the grass and we eventually found Short-toed Lark but we only saw them in flight after flushing them. Walking in the sandy dunes near the beach we found Tawny Pipit just before we left. 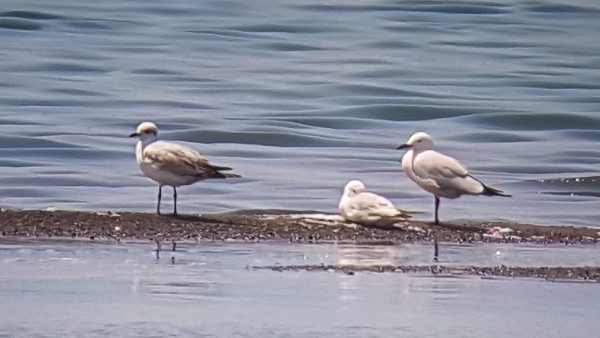 Next we drove further along the Gulf of Kalloni and stopped at a disused beach dwelling, near the shore a sand bar extended into the Gulf and on it were lots of gulls. Scanning the gulls produced two Slender-billed and a single Mediterranean Gull and both Black-necked and Great Crested Grebes. 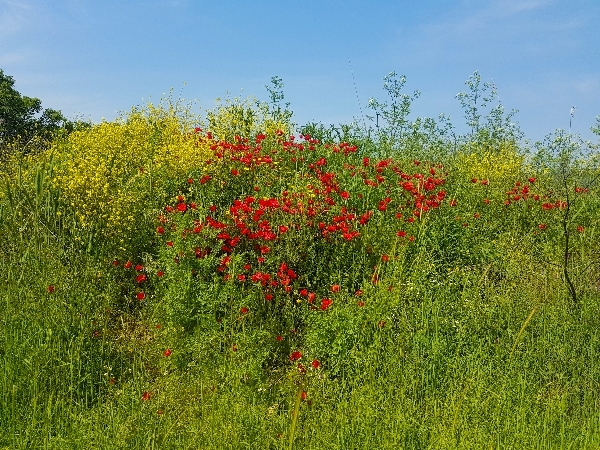 The flowers this year are amazing

At the marshes near Mesa we found lots of butterflies a beautiful array of flowers including Tongue Orchids. Over the net hour we listed some good birds too, Black-eared Wheatear was seen from the bus whilst Red-backed and Woodchat Shrikes were seen out in the fields during the walk. We had plenty of raptor sightings with Short-tod Eagle and Long-legged Buzzards drifting over the distant hills whlst both White and Black Storks rose on the thermals a little nearer. 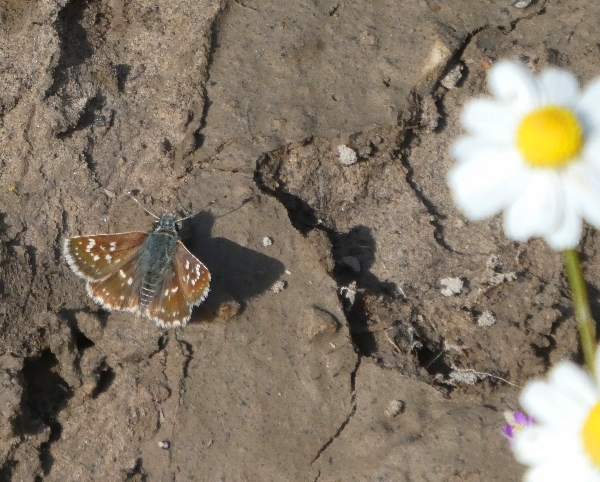 Our last Port of Call for the day was the Tsinias River, winter flooding has devastated the reedbeds and riverside scrub, very few birds were seen, it will take a year or two to recover to its former glory. At the river mouth we saw 3 more Sandwich Terns with Common Terns and lots of Yellow-legged Gulls. We ended our epic day there, it was 5:30pm, we drove back through Skala Kalloni to the hotel for a nice cold beer.