We had another full and action-packed day (we saw 93 species) as we travelled to the north of the island where we saw some excellent species and past through the most beautiful scenic coastline. But first, we visited the Salt Pans and a couple of other sites along the way.

After our early morning breakfast we made a short visit to the eastern side of the Salt Pans where an elevated hide gave you excellent views over the whole area. We hoped for sightings of lots of waders but apart from a group of 200+ Ruff we were disappointed. The highlights were: a group of 9 adult Slender-billed Gulls, a very close Little Stint, two Common Sandpipers and some very distant Kentish Plovers. What was superb was the morning light, the whole area was alive with Greater Flamingos, Common Shelducks, we saw a group of Ruddy Shelducks looking superb and a distant Black Stork. 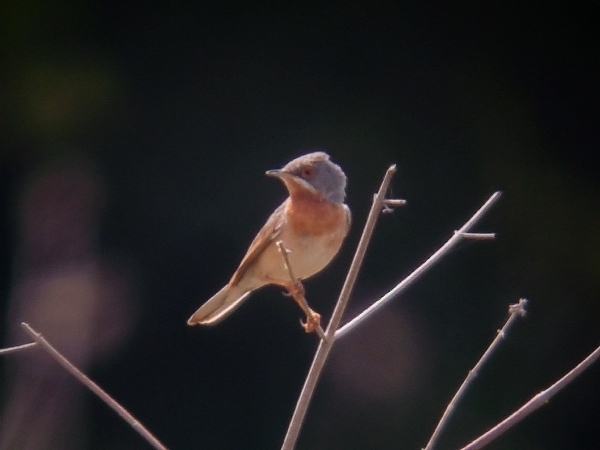 Very close to the hide we saw a group of Black-headed Buntings, Whinchat, Woodchat Shrikes and the usual Crested Larks and Corn Buntings.

Back in Kalloni we collected Guiani and his wife Teresa, they were to follow the bus in their car for the next few days and become part of the group, we set off at 8:15 and headed north stopping at the copse of ucalyptus trees just north of the town, we call it the Scop’s Copse. We searched extensively for a roosting Scops Owl without success, but we find a nesting pair of Middle Spotted Woodpeckers which showed well at times.

Up in the hill above Kalloni on the road to Petra there is view point where you have commanding views over the surrounding hillsides and high ridges, it is a great place to watch raptors and that is what we did for the next hour or so. 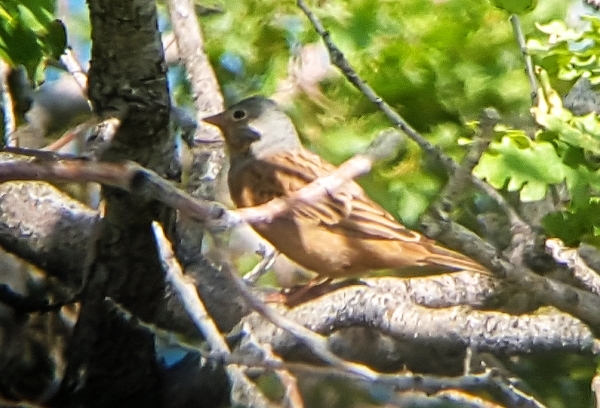 Despite sky having a hazy mist we saw quite a few birds up there, the most common species were Short-toed Eagle and Long-legged Buzzard but we did several Black Storks, Common Buzzard, Common Raven, Eurasian Sparrowhawk and a superb Goshawk. There was lots of birds in the scrub and on the hillside behind us, we saw Cirl Bunting, Cretzschmar’s Bunting, Black-eared Wheatear, Western Rock Nuthatch, lots of Subalpine Warblers and a few common species.

We drove through Petra and climbed the hillside along the north coast, it really is beautiful up there. Looking back towards Petra you can see the large bay with picturesque islands and the mountains behind the town the colourful roadside flowers enhanced the pictures it was truly spectacular.

We parked up at a spot on the hillside and within minutes we were watching our target species the Ruppell’s Warblers, it was the best sighting I have had of this little beauty in a long time, it simple sat within a few meters from us and sang it’s heart out. 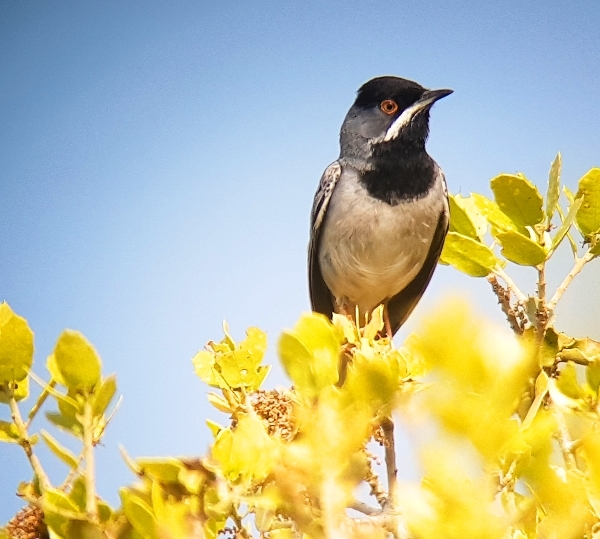 Whilst scanning the ocean for Shearwaters we saw, what we thought were some large cetaceans breaching out of the water, we learnt later that they were in fact, Giant Devil Rays! How amazing was that?

At large lay-by a little further on we searched for more species on the coastal scrub, we found Black-eared Wheatear, Sardinian Warbler and to our great delight a couple of Audouin’s Gulls, they sat on the ater and later flew up even closer and landed on the cliff-side rocks. Brief and distant views were had of Blue Rock Thrush and 3 fantastic Alpine Swifts flew low over the cliffs and just above us  before we moved on. 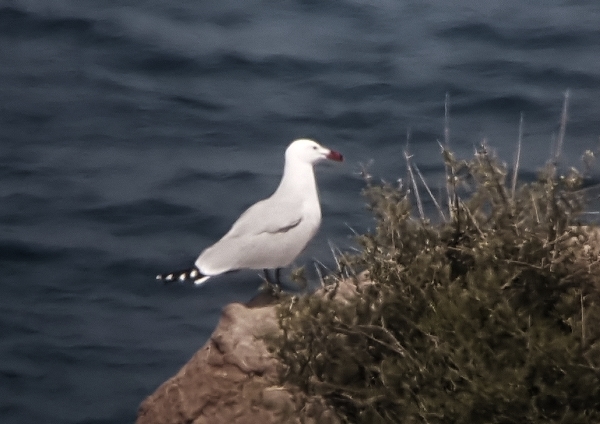 one of the Audouin's Gulls perched on the cliff rocks

The large reservoir at Peresma between Petra and Molivos was the perfect place for our picnic lunch, lots of butterflies were visiting the vast array of flowering plants and the reservoir was covered in gulls and other birds. We found two more Audouin’s Gulls and had close views of Ruddy Shelduck. We found Persian Meadow Brown, Amanda’s Blue, lots of Clouded Yellows and both Common and Scarce Swallowtails. A short walk produced nothing more although we learned later that a European Roller turned up after we left!

Next we continued following the coast road climbing the hills after passing through Molivos and Eftalou, along the road we accidentally drove over a snake and on inspection we found we had killed an Ottoman Viper, it was such a beautiful creature, also the most venomous snake in Europe, but I still felt bad about killing it. 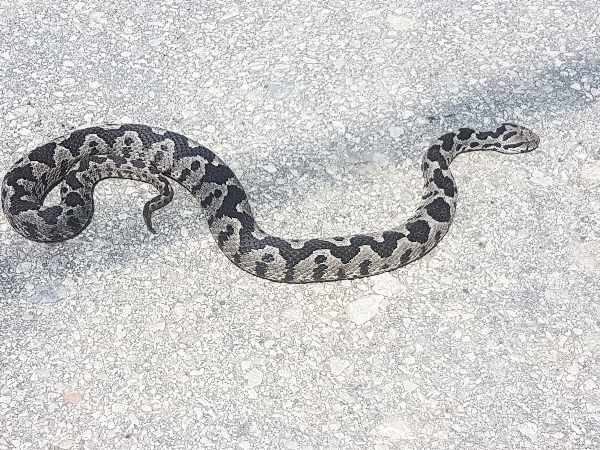 Ottoman Viper - killed on the road at Eftalou

Our walk on the Eftalou to Skala Sikaminias track produced a few nice sightings, we had great views of Masked Shrikes, Golden Oriole, Cirl Bunting and few common birds. Migrant species seemed few and far between, we heard a distant Hoopoe and we saw a number of Common Swifts flying over us with lots of Barn and Red-rumped Swallows. Looking out over the sea to Turkey which at this point is just five miles away produced nothing, the sea was flat calm and bird-less. One bit of excitement occurrd when a group of birds alighted in a nearby bush, we saw 3 Black-headed Buntings an Ortolan Bunting and in the bush a female Cretzschmar’s Bunting. 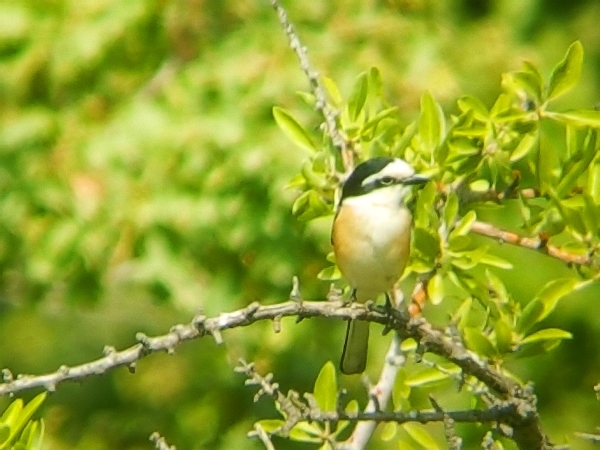 a distant shot of the female Masked Shrike

For the last part of the afternoon we drove back to the Salt Pans at Kalloni, but along the way we stopped tat the Scop's Copse for a second try at seeing the owl, this time we found it. Eagle-eyed Mick found it first what a star, the bird showed very well and remained asleep the whole time we were there.

We entered the salt pans along the main entrance on the western side with the sun behind us. Lots of birds were feeding in the channel, we had good close views of Marsh Sandpiper with Ruff, Wood Sandpipers, Little Stints and Little Ringed Plovers. A Yellow Wagtail fed very close to the bus, it turned out to be our first ‘Dombrowski’  (Romanian) subspecies. 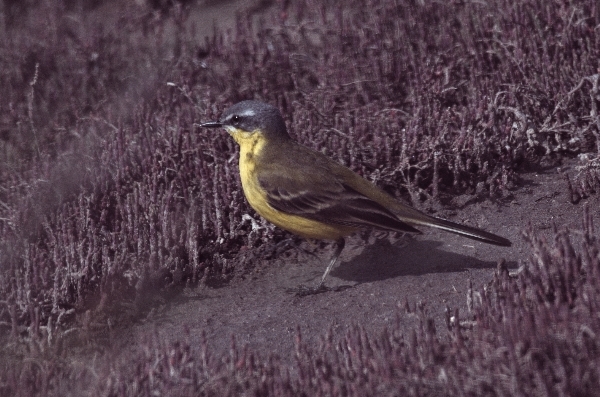 Yellow Wagtail - dombrowski' this is Richard Pettett's picture but something went wrong when I processed it on my lap top, the colours have gone all wrong

At Alykes Wetland found behind the pans we saw a apir of Garganey, 8 Glossy Ibis and several Collared Pratincoles flew over, quite high up. In the Horse fields near the beach we found 9 Collared Pratincoles on the ground and had great views of quite a few species in the beautiful afternoon sunlight. Red-throated Pipits, more Yellow Wagtails and all 3 small plovers or peeps, Little and Greater Ringed and Kentish Plovers. 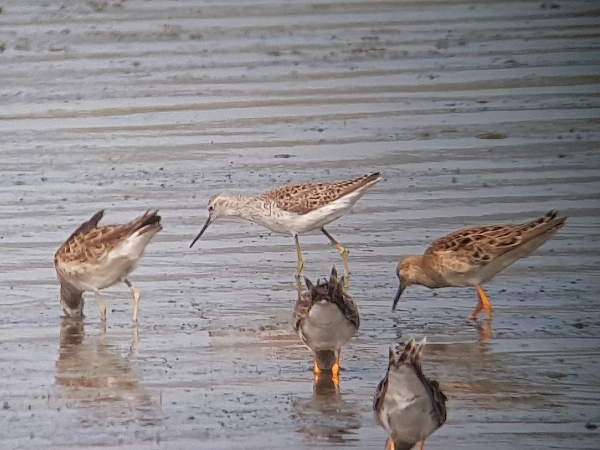 We called it day at 5:30pm, another bird-filled and satisfying day was over, all that was left now was a nice cold beer, a lovely hot shower and dinner, in that order!