WEATHER:  dry sunny warm all day, wind blustery but not as bad as yesterday. temp 23C

We had a great start to the day when some of the group set out just after 6am for a quick birding session before breakfast at 7am. A small pool near the large Reservoir in the Potamia Valley is a regular roost site for Black-crowned Night Herons which is a species we haven’t yet seem. We found two of them, both immature birds but Night Herons nevertheless, on the way back we decided to stop off at the Christou River where a Spur-winged Lapwing had been seen recently, it was a good decision as we saw, not one, but two. Fantastic, a good island bird and a great one for our list. 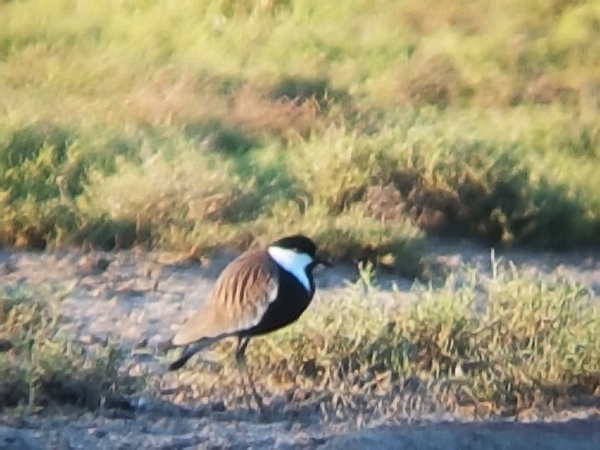 this bird was quite distant hence the poor quality, Spur-winged Lapwing (Plover)

After breakfast we drove to Achladeri pine woods, an area on the southern shore of the huge Gulf of Kalloni. These pine woods are ‘famous’ for hosting the Kruper’s Nuthatch, a much sought-after island species, for the last twenty years these little gems have nested in well-known tree-stumps and have been very easy to find, this year however they are not there!!  So, we have to walked the tracks and trails hoping to bump into one or find a new nest site. 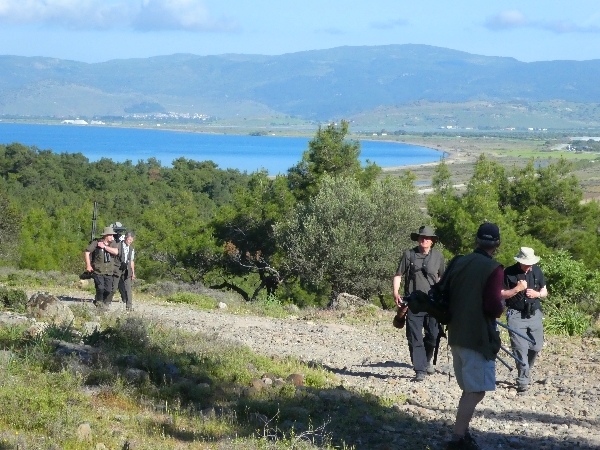 We first walked along a track where the pine forest was more open and was made up of much younger trees. We spent an hour walking along the tracks looking and listening for the Kruper’s Nuthatch without success, the morning light was superb, we had a clear blue sky, no wind and even at 8am it felt warm. We did find Short-toed Treecreeper, lots of annoying Chaffinches, our first Blackcap and several Serins which were also new for the list. As we began to leave the area we saw an incredible mixture of raptors come up out of the forest.  First an Eleonora’s Falcon flew off quickly but the a Hobby, a female Red-footed Falcon and a Eurasian Sparrowhawk went up together and circled above us, how amazing was that!

Our next sortie into the pine woods was made much nearer to the old nest site and this time we were successful. As we entered the woods we saw a group of birders ahead of us, they talking quite loud and were getting very excited. As we approached it was obvious what was the causing the excitement because we could hear the trilling of at least two Kruper’s Nuthatches. Smashing, we watched at least three birds for the next twenty minutes and all of the group got to see this island speciality. 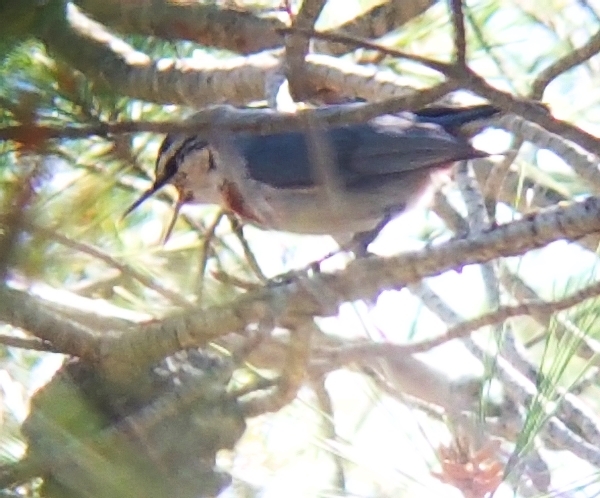 two shots of the Kruper's Nuthatch 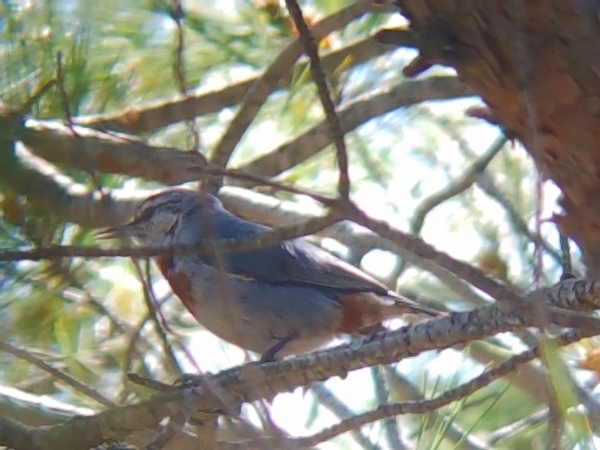 The bus was buzzing as we left the area about an hour later. We drove past some amazing fields of red poppies and other colourful flowers as we made our way down to Vatera, the wind had picked up by the time we got there, but we made a couple of stops before we reached our destination on the Agios Fokas headland. A river stop produced a Purple Heron (carrying a snake or an eel), lots of Black-headed Buntings, Eastern Olivaceous Warbler, Reed Warbler, Cetti’s Warbler (heard) and the inevitable Corn Buntings. We also had our first sighting of Sardinian Warbler, this area holds a good population of this otherwise very common scrub warbler. 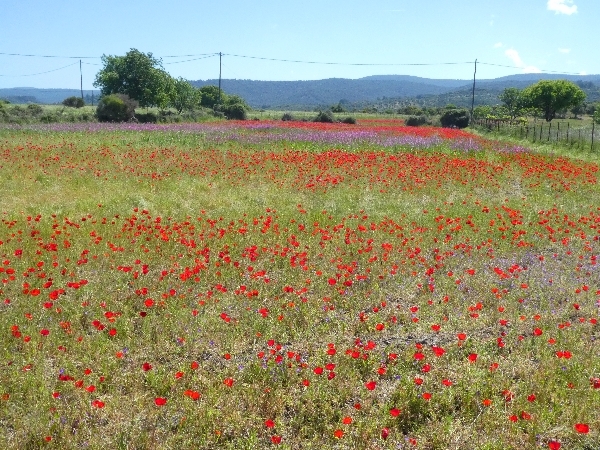 At the headland we had lunch, just after lunch we had a short Orchid session, finding Holy and Pyramidal Orchids and then we spent a little time sea-watching in very windy conditions. We saw several small groups of Yelkouan Shearwaters and a single European Shag of the desmaresti subspecies. Eastern Olivaceous Warbler and a family party of Sardinian Warblers showed very well as we climbed up the pathway to the headland. 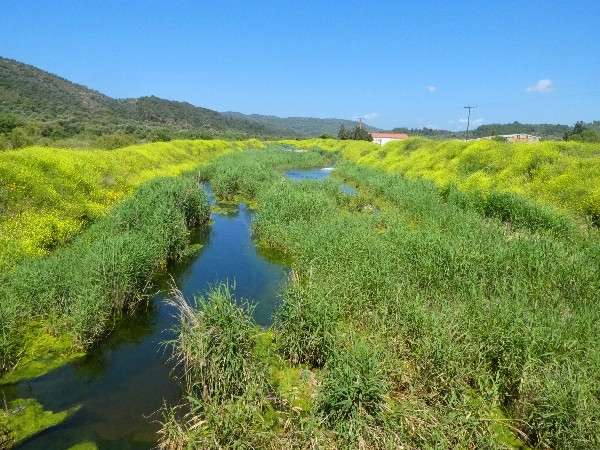 the Almiropotamos River near Vatera where we saw the Purple Heron

It was now after 2pm so we set off for Kalloni Salt Pans but not before the obligatory ice-cream stop in Vatera. We kept to the shoreline of Kalloni Gulf on the return journey, passing through Skala Polichnitos and a series of salt pans where nothing new was seen. Several wader species, gulls and terns were present and a couple of hundred Yellow-legged Gulls. Again, the flower meadows were amazing as we drove back, it really is a beautiful island in many ways. 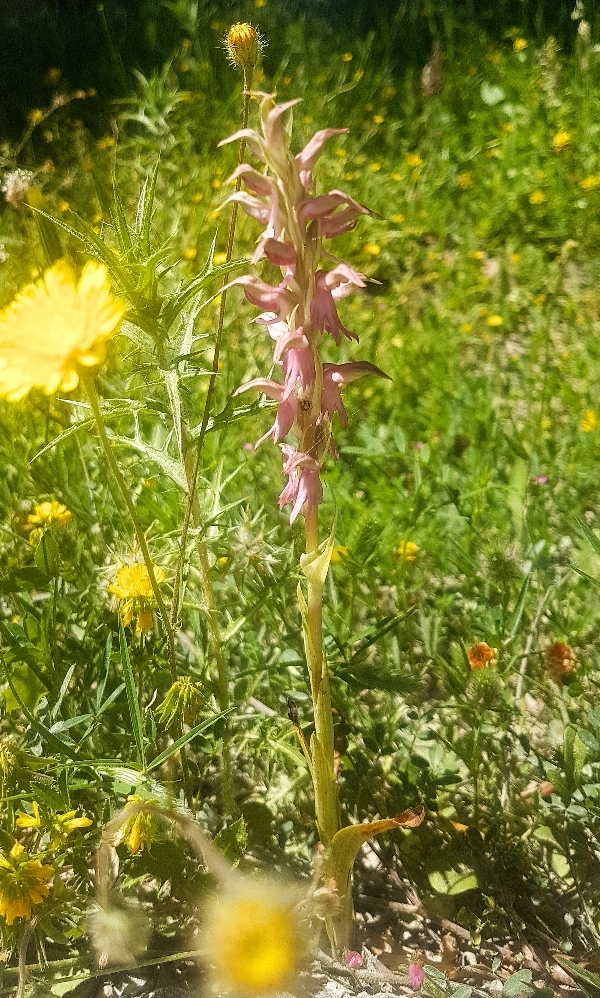 At the Salt Pans we were too late for the stars of the show, both Dalmatian Pelican and Caspian Terns had been seen all day but we arrived just after they left, don’t you just hate that expression “you should have hear five minutes ago”. Undeterred we spent the hour visiting several places around the Pans, Alykes Wetland and Mesa. We walked a long way along the eastern channel at the pans and our efforts were rewarded by views of Eurasian Spoonbill (albeit fast asleep) and two Eurasian Curlews, also fast asleep to start with. At Alykes Wetland and the sheep field beyond we found a superb Montagu’s Harrier, we watched this bird for quite a while even after it had caught its supper and sat on the grass to eat.

Our day was over, we had seen another great variety of species and added a dozen new sightings to our Lesvos List which now stands at 141. We enjoyed our dinner at 7:30pm the group were in a buoyant mood with plenty of laughter at the table.