WEATHER: another bright and sunny day, the wind picked up in the afternoon. Max temp 25C

Our second visit to the west of the island was made today as we visited the coast just south of Sigri We drove the track from Eresos to Sigri passing through some rugged countryside and the ford at Meladia. The first stop we made was just passed Agra on the road to Eresos, a deserted farm dwelling and neglected orchard looked good for warblers and other migrant birds. We quickly found Red-backed Shrike, Black-headed Bunting, Lesser Whitethroat and unusually, a Great Reed Warbler. It was a little chilly out there but a flock of European Bee-eaters flew in and our cold discomfort soon melted away. 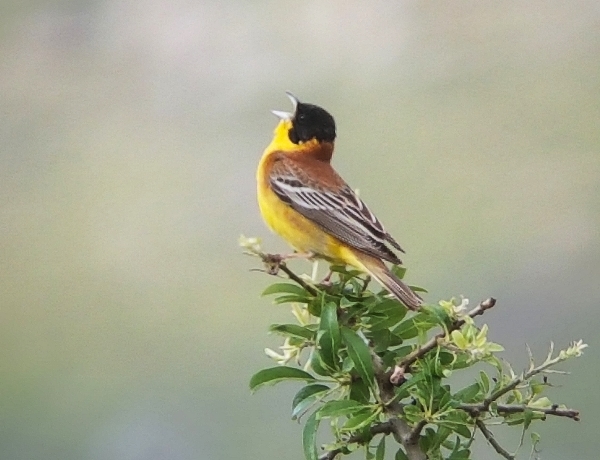 Black-headed Bunting, we saw many of these today

Once we got onto the ‘coastal track’ at Eresos we began birding in earnest, our first stop produced our first Sombre Tit of the trip, we also saw Chukar, Spotted Flycatcher, Cretzschmar’s and Cirl Buntings, Woodchat Shrike and lots of Corn Buntings. A couple Peregrine Falcons and a pair of Ravens worked the hillside ahead of us just as we left. 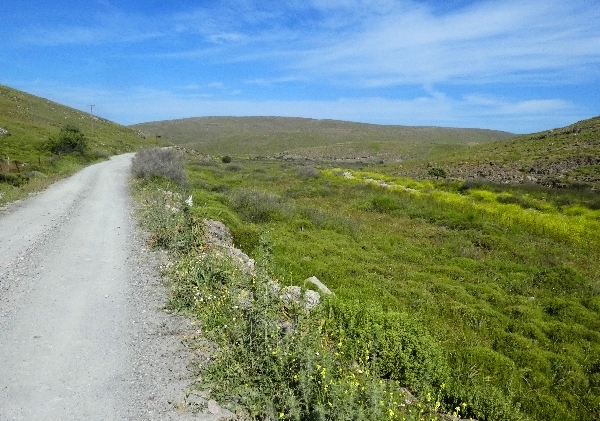 Meladia Valley track, about 1km before the Ford

For the next hour we made our way slowly to the ford at Meladia which lies about half-way between Eresos and Sigri, we had great views of several more Cretzschnar’s Buntings, as well as Black-eared Wheatears, a single Cinereous Bunting and more Woodchat Shrikes. As we approached the ford the number of bushes increased and so did our sightings. We added another species to the list when a Common Redstart appeared briefly, Golden Orioles dashed about as they do, we also found a Bonelli’s Warbler, Eastern Olivaceous Warbler, Cetti’s Warbler and to our great excitement an Icterine Warbler. 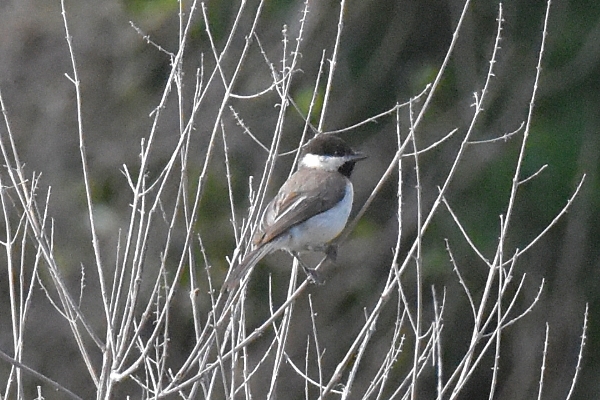 a distant shot of the Sombre Tit, taken by Richard Pettett

At the ford a noisy pair of Ruddy Shelducks greeted us, we scanned the scrub around the pools either side of the ford and found Spotted Flycatcher (1) and Pied Flycatcher (3). A Cetti’s Warbler showed really well too. Scanning the hillside we found a bush with four Golden Orioles in it and both Woodchat Shrike and Black-headed Bunting were perched on it, an amazing array of colour just in one bush. 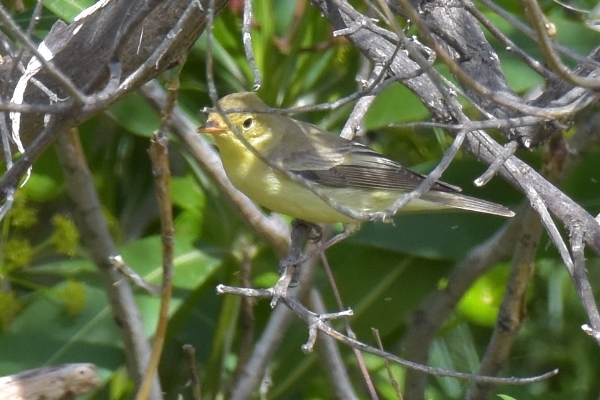 A walk around a fig plantation produced more Spotted Flycatchers, a couple of Whinchats and a few more Golden Orioles. Whilst eating lunch back at bus another group called out a Pallid Harrier which we all saw, it was distance and I don’t the identification was a safe call at that distance. 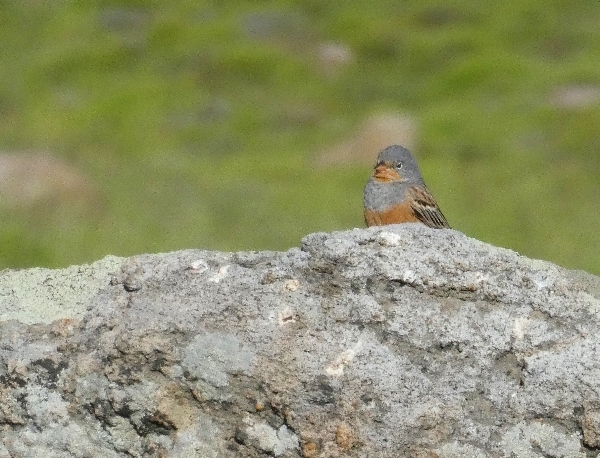 A typical pose from a Cretzschmar's Bunting in the Meladia Valley

After receiving news of a Rufous Bush Robin on the other side of the plantation we dashed over there but the bird did not call or show whilst we were there. We did find a very showy Eastern Orphean Warbler and the number of Black-headed Buntings was in double figures.

We worked our way along the track to Sigri, a Little Owl, a Marsh Harrier and a pair of Long-legged Buzzards were the only notable sightings. We saw A Blackcap at the old Sanitorium and found the ice-cream shop in Sigri.

Our visit to the Lower Ford at Faneromeni produced a single female Western Yellow Wagtail of indeterminate race, another Spotted Flycatcher and a lovely hirundine spectacle. Many swallows and martins were hawking insects along the river and they all decided to perched up on the wires above us. In one line we saw Barn and Red-rumped Swallows and House and Sand Martins, it was lovely to see so many. A large flock of European Bee-eaters flew over as we were leaving. 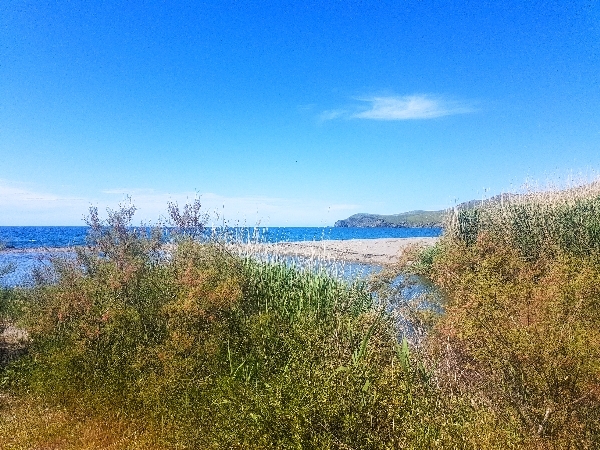 The visit to the beach pool and river outlet (shown above) was very nice but it had very little to offer, we saw Little Ringed Plover, Wood Sandpiper and a Common Sandpiper.

We headed back to Kalloni around 3:45pm and arrived at the Kalloni Salt Pans at 5pm, we had news of a Broad-billed Sandpiper and we were determined to see this one. In the ‘Sheep Field’ at the Alykes Wetland we scanned the remaining pools and came up trumps, at last we had this little gem in the bag! Other species of note included Little Stint, Black Stork, White Winged Tern and a nice flock of Ruff. 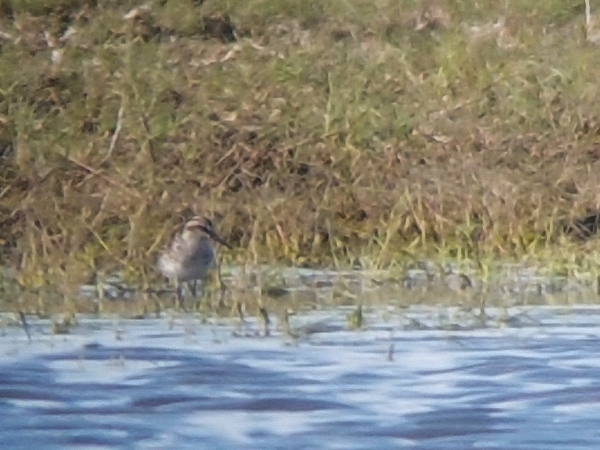 a record shot of the Broad-billed Sandpiper, it was quite distant

Back at the hotel we enjoyed our bird log, we added a few new species to the trip tally which now stands at 156.