Peter & Sue Hayes and myself took a very early flight from Gatwick to Thessaloniki and we were supposed to catch a connecting flight to Mytiline, Lesvos a couple of hours later. That did not happen because Aegean/Olympic airlines cancelled our flight and put us on a 9pm flight instead!!

So, we were stuck in Thessaloniki for 6 hours longer than expected! We decided to do the most sensible thing under the circumstances and that was to hire a car for the day and go birding!

We landed at 11:00am and an hour later we were driving out of town heading west to the huge lagoon at Kalochori. I had been there before and found that it was excellent for waders, gulls, egrets, terns, herons and wagtails. In fact, the last time I visited I found a Terek Sandpiper there!!! Wow, yes please we would like to have some of that! 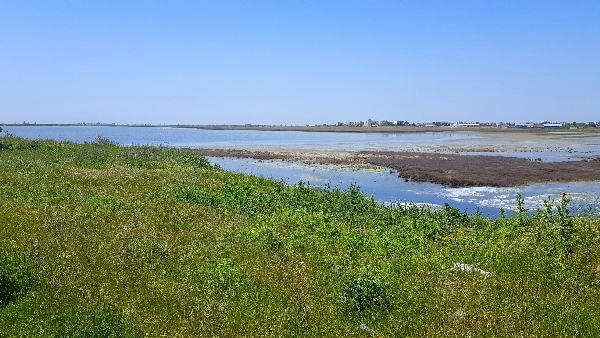 a view of the huge lagoon at Kalochori

At the airport we listed Common Swift, Grey Heron (fly over), Common Starling and Hooded Crow, Collared Dove, Feral Pigeon and House Sparrow. We then drove 22 miles from the airport to Lagoon Kalochori and the Sat Nav got us straight there, no problem, we assembled our scopes and began listing birds.

A marshy area covered a large expanse before the actual lagoon came into sight, waders were dotted all over the marsh:  Wood Sandpipers, Ruff & Curlew Sandpipers were the most numerous species but we also saw Common Sandpiper, Pied Avocet, Common Shelduck, Marsh Harrier and some distant Greater Flamingos. I couldn't get over the numbers of Little Stint, they were everywhere and looking really good in their summer plumage. 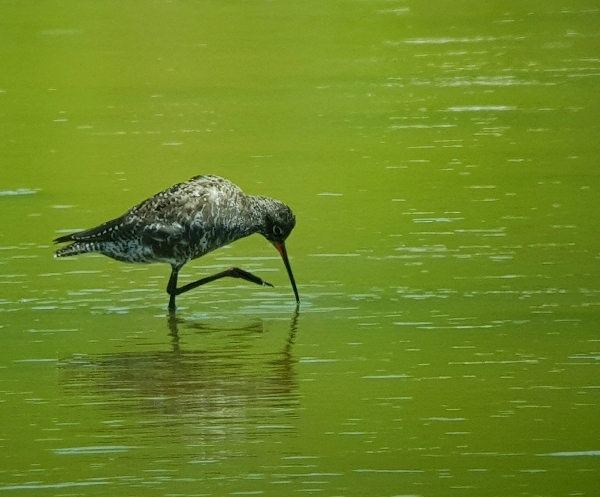 Small groups of both Black-headed and Mediterranean Gulls flew over us and individual Yellow-legged were dotted about. Behind was the shoreline of a large bay, many Common, Little and Sandwich Terns were noisily going about their business. 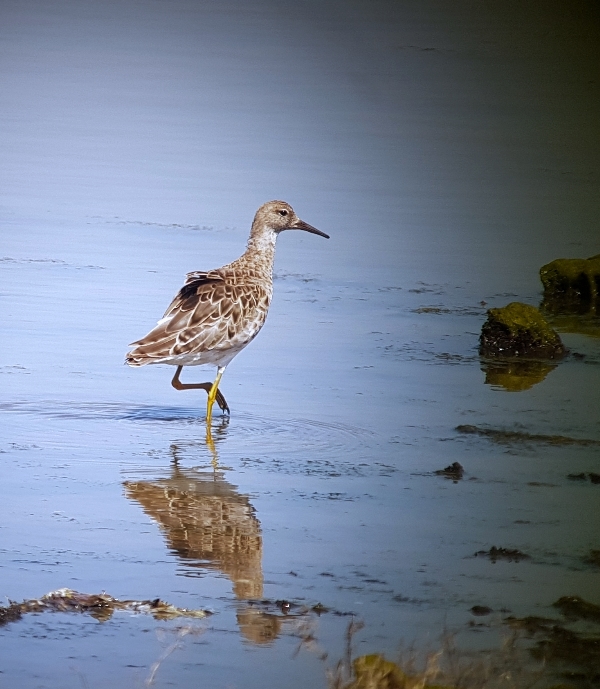 We moved along the track to view the first section of the lagoon and found a lot more waders there. Little Stints seemed to outnumber all the other spe ies put together, we found a group of Curlew Sandpipers with a single Dunlin, Wood Sandpiper, Ruff, Spotted Redshank, Common Sandpiper and a Greenshank. 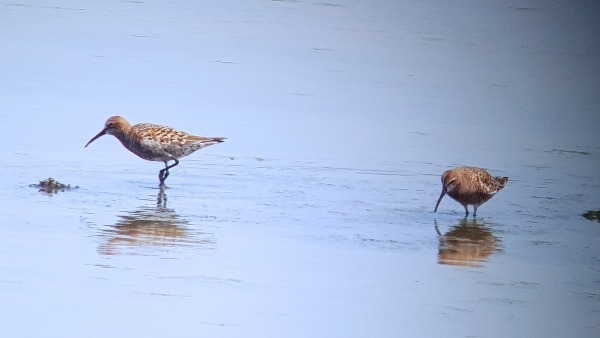 In a drier area we found several Kentish Plover with Greater Ringed Plovers and a single Little Ringed Plover. I picked a Temminck’s Stint amongst the Little Stints and searched for Broad-billed and Terek Sandpipers without any sightings.

A few passerines were also encountered during this time, we saw lots of Barn Swallows, House Martins with a few Red-rumped Swallows and some distant Swifts. We were getting a little peckish at this time and by coincidence a small restaurant was just ahead of us. 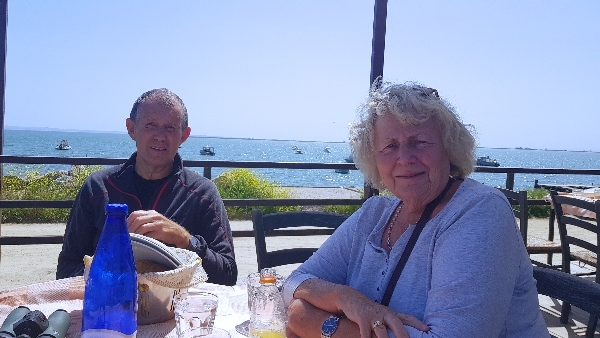 Sue and Pete at lunch

We had a superb lunch, sitting on a wooden terrace overlooking the lagoon and the bay, we had bright sunshine and a lovely cooling breeze. The food was delicious, Greek Salad, Fried Aubergine, grilled Anchovies and ice-cream to follow, how nice was that. 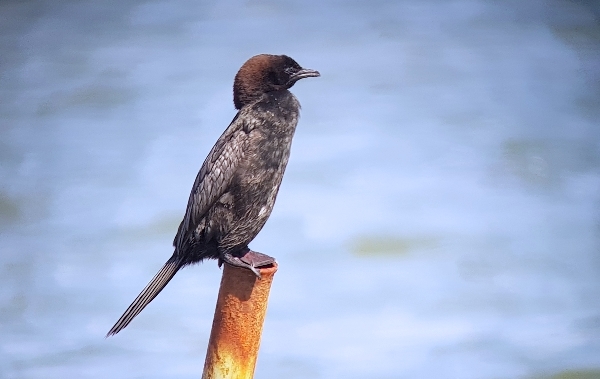 We had to drag ourselves away from the table for more birding, our next stop was a little further out towards the bay, we scoped a few more species on the main lagoon counting a flock of 46 Spotted Redshank, most of them were in summer plumage, a lovely sight. 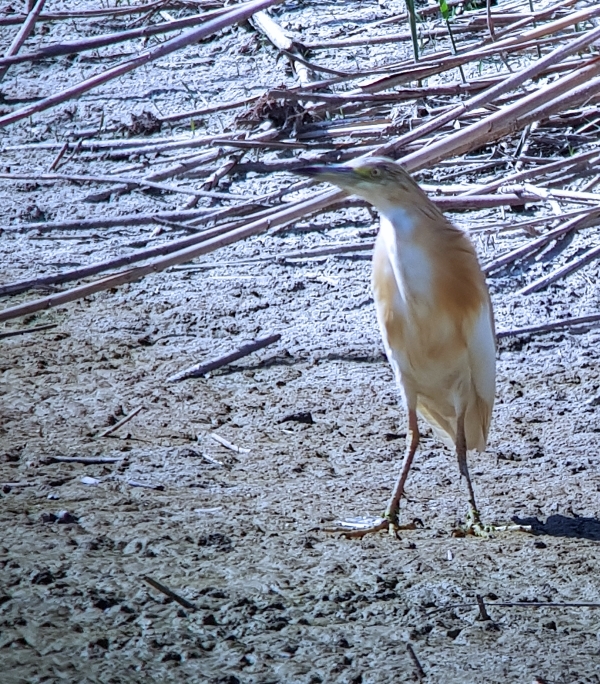 Black-headed Yellow Wagtails (subspecies feldegg)sat on top of bushes, the males were stunning, on the opposite end of the beauty scale we also saw Corn Buntings and Crested Larks.

Around the edge of the pools we picked out Little Egrets and Squacco Herons and on most of the post sat Pygmy Cormorants or Great Cormorants. But it was the terns that blew us away, feeding over one pool we saw about fifty Black Terns and half a dozen White-winged Terns, they were thrilling to watch. 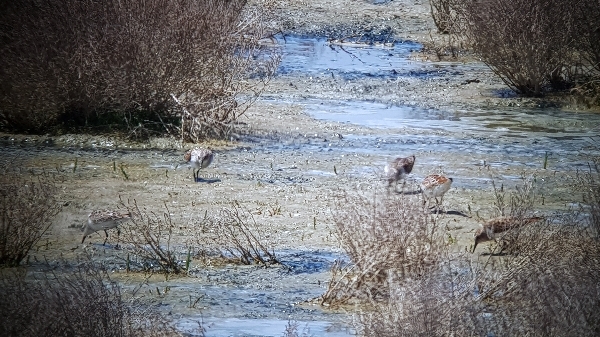 Some reedbeds held Reed Warblers and Cetti’s Warblers (we never saw either but heard them) and small groups of Mediterranean Gulls would fly over us giving their very distinctive call. Towards the end of our visit we added Common Whitethroat to the day list and enjoyed more views of the stunning summer plumage Curlew Sandpipers.

It was 5pm when we left the area, the sun was dropping and silhouetted the birds out on the marshes around the lagoon, so we decided that we had had a great few hours and would leave it that.

We took the car back to the rental company and took their shuttle bus back to the airport. Our 9pm flight to Lesvos left on time (it was a twin engine propeller plane with about 50 passengers on board). It got us there OK so no complaints.

A short taxi ride took us to our overnight hotel, we are meeting up with the rest of the group tomorrow when the tour officially starts. We saw 52 species this afternoon and some of them will not been on Lesvos during the rest of the trip.

As I write this at 11pm (Greek Time which is 9pm UK time) sitting in my hotel room near Mytiline, a Scop's Owl has just starting calling from the garden, how nice is that? Considering that I got up at 3am this morning you can appreciate what a long day I have had.....kalinychta (good night!).