What a great first full day on Lesvos!! Birds galore, terrific scenery and lovely weather, you couldn’t ask for more! We made an early start, pre-breakfast jaunt to the small lake called Metochi. In years gone by this pool has produced some wonderful birds but recent ‘improvements’ have led to a huge decline in birds species. The pool was dredged and the reedbeds cut down in 2018 and they must have been done again during my absence because very little new reed growth was evident. 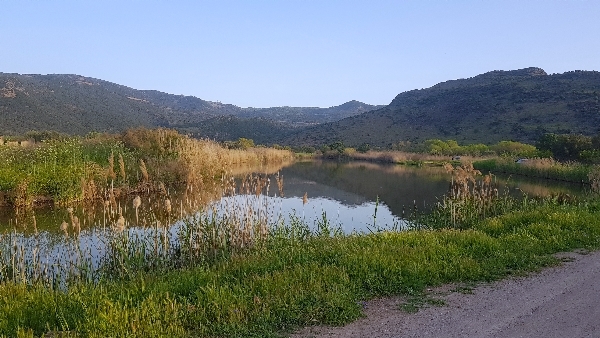 However we enjoyed what was available which was: 3 Little Bitterns, 1 male Little Crake, Grey Heron, Little Grebe, Moorhen and a couple of Mallards. In the reeds that remained we saw Reed Warbler, Cetti’s Warbler and we heard Eastern Olivaceous and Sedge Warbler. 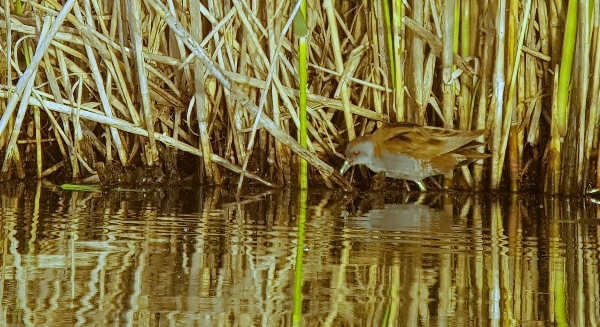 Driving round to a nearby rock face we added a few more species such as Eastern Black-eared Wheatear, Western Rock Nuthatch, a few Jays, a Hoopoe (heard) a Common Nightingale in full view (but distant) and several common species (mainly Corn Buntings and Crested Larks!!). On the way back to breakfast we put up a Turtle Dove from the track and saw Black Stork in flight. 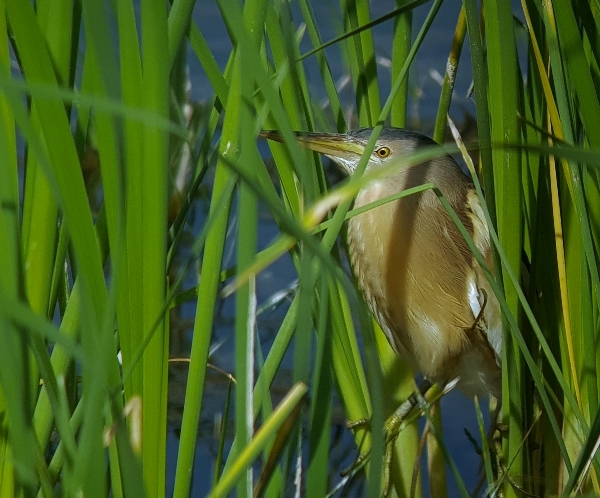 After our nice start to the day at Metochi we set off for the Salt Pans  via the Tsiknias River our first stop was at the river mouth. A Grey Plover sat on the sand bar with a single Gull-billed Ternwe also saw Common and Little Terns and Little Egrets.

Walking up river to the ford we searched for a Spotted Crake which had been reported recently but we never spotted it (ha!). We did see a Whinchat and a Woodchat Shrike and heard more Cetti’s & Olivaceous Warblers and Nightingales. At the ford we enjoyed views of Wood & Common Sandpipers, a brilliant Great Reed Warbler showed so well, then we added Squacco Heron and Little Bittern to our sightings list. 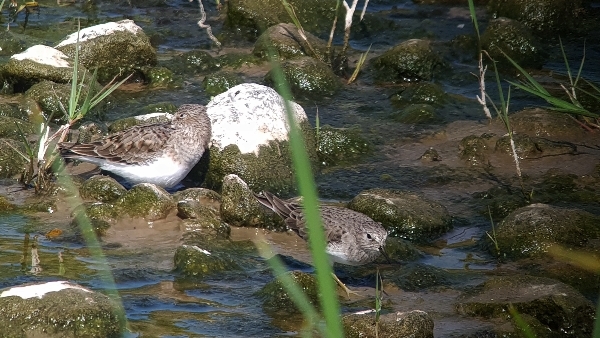 Walking a little up from the stream we found 3 Temminck’s Stints, a Common Snipe, a Black-headed Bunting, Black-headed Yellow Wagtail, a single Dunlin and some Little Stints. Overhead we saw Black Storks, European Bee-eaters, Swallows, Swifts and Martins.

Driving through to the salt pans we had excellent views of an Eastern Olivaceous Warbler more Bee-eaters, Whinchat and another Black-headed Bunting. At the salt pans we spent some time looking for a Great Spotted Cuckoo that had been seen over the last few days, it was quite windy by then, we never saw the cuckoo.

Along the channels we saw more Ruff, Wood Sandpipers, Black-winged Stilts and Little Stints before we reached Alykes Wetland. Alykes Wetland was dry!!  So, we moved on to the mouth of the inlet which supplies the salt pans with salt water. On the shore of the bay we saw Eurasian Curlew and both Little and White-winged Terns flew past along the shore.

Our walk through the huge horse meadow produced some good sightings, it was hard going but we eventually found what we were looking for. We first found a couple of Red-throated Pipits and then Greater Short-toed larks. A very distant Red-footed Falcon came next followed by a few Kentish Plovers found by Mike.

A couple of small pools with very little water attracted a few species, we found Black-headed Yellow Wagtail, Whinchat, Temminck’s Stint and a Dunlin. We then had quite a few more Red-throated Pipits and went on to find three more Greater Short-toed Larks.

Back at the bus we ate our picnic lunch and whilst doing so we saw a distant Short-toed Eagle and also a Marsh Harrier. With lunch over we drove off the salt pans at the western entrance and returned to them on the eastern track. A small pool there had hosted a Spotted Crake for the last few days so we staked out the pool and hoped that the crake was still there.

A couple of Wood Sandpipers, a Temminck’s Stint, a Black-headed yellow Wagtail and Red-throated Pipits were seen before the Spotted Crake showed itself. Whoopee! What a little beauty that one was, it looked superb in the lovely sunshine.

We decided to drive to the pine woodlands at Achladeri for our next birding session but first we made tow stops along the way. The first was to view some open pools just east of the salt pans, there we saw a small flock of 7 Greenshanks and lots of Little Stints and Ruff. Then we made a stop at Mesa to look at the beach pools there.

Plenty of waders were feeding in the pools, we saw Black-tailed Godwit, Ruff, Little Stints, Wood Sandpipers and two smashing Curlew Sandpipers in summer plumage. In a far pool there was Ruddy Shelduck, Avocet, Black-winged Stilts and a couple of Collared Pratincoles flew over us.

The pine woods at Achladeri are a well known site where to see Kruper’s Nuthatch and that is where we went next. After walking along a track for not too long we heard one calling. Over the next 30 minutes we had superb views of a pair of these diminutive Nuthatches, they really are small!

Whilst there we noted our second Short-toed Eagle and our second Red-footed Falcon fly over the top of us. We also found Greenfinch, Goldfinch, Chaffinch, Blue & Great Tits, Eastern Black-eared Wheatear and Serin, but not Short-toed Treecreeper which was one of our target species.

From the woods we drove to a beach taverna where we sat and enjoyed a refreshing drink, we then drove back to Kalloni and onto a site for Scops Owls. This regular site has been decimated, the huge eucalyptus trees that play host to the owls have been chopped back to just 20ft trunks, all the branches have and so have the owls!

Round the back of the site three mature eucalyptus remain and that is where a pair of owls have been roosting. We search the trees and drew a blank, the owls had gone elsewhere. What we did find was a nesting pair of Eurasian Nuthatches, well that was our third Nuthatch species of the day, a hattrick of Nutters!!

I dropped the group back at the hotel at 5:30pm with the option of a last hour birding at the mouth of the River Tsiknias. None of them wanted to join me so I went alone, they should have come………..!!!

I love visiting the river last thing in the day there is always something to see and tonight was no exception. My friend Jeff was there and he pointed out a  Slender-billed Gull sitting on the sand-spit. Wow! A nice start, then a summer plumaged Grey Plover turned up, then 5 Sandwhich Terns landed and then a Ruddy Turnstone appeared.

Many Common and Little Terns were also present and to top the lot a first year Little Gull dropped in, how fantastic was that? Four new birds for the trip list in about 10 minutes! I called it day after that and drove back to the hotel, only slightly delighted and a little disappointed that the group had missed such a nice selection of new birds!