We made a second attempt to see the Scops Owl on the edge of Kalloni Town and once again we dipped, we also tried the School House in Kerami and dipped again. A quick look at the Tsiknias river mouth produced nothing but a few Common and Little Terns, so all in all we should have stayed in bed!

After breakfast we had a quick look at the pool outside the hotel. There we saw Marsh Harrier, Wood Sandpiper, Reed and Great Reed Warblers and we heard Cetti’s and Common Nightingale calling form the shrubs. We then set off for our epic journey to the furthest western point on the island at Sigri but first we had to get there. We took the scenic coast road out of Skala Kalloni and made our first stop at the marsh area near Parakila where we saw a few Greater Flamingos, Common Shelduck, some Black-winged Stilts, Great Egret, Moorhen and a Little Egret. 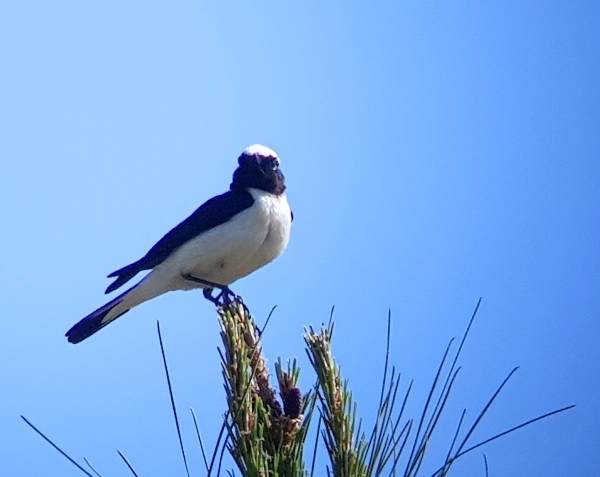 Our main stop was just west of the town of Mesotopos, we had panoramic views of the mountainside and the valley down to the coast, but it was quite windy there. It took a while before we found any birds at all but eventually they came good for us. A Spotted Flycatcher was first on the list followed quickly by Red-backed Shrike, Black-headed Bunting and Blue Rock Thrush. We had distant views of a Chukar and of a Raven before we found one of our target species, the Cretzschmar’s Bunting. A pair of Black-eared Wheatears showed very well close by, they were nesting a dry-stone wall, as soon as we realised this we moved away.

Two more very short stops produced more of the same with the addition of Woodchat Shrike, and more Cretzschmar’s Buntings. Once we negotiated our way through Eresos we found ourselves on the much improved coastal track to Sigri. We made many stops to look at birds along the way and we got out of the bus for longer periods at several places. Our first ramble produced European Bee-eaters, Spotted Flycatcher, Raven and a Western Rock Nuthatch. 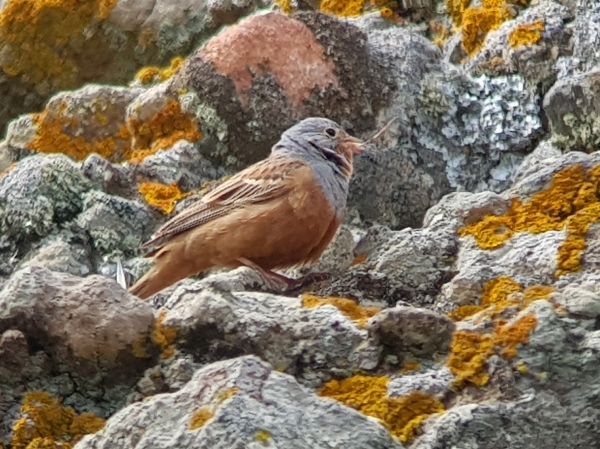 The track snaked its way up and over a high ridge and dropped us down into the Meladia Valley, that’s when things started to get very interesting, Cretzschmar’s Buntings and Black-eared Wheatears vied for the position of most common species and Corn Bunting came in third. Once we reached the bottom of the valley and the road flattened out we stopped to view a low rock face. Almost immediately we found Rock Sparrows and Mike, looking in the opposite direction, found a nice male Orphean Warbler. During the next 15 minutes we added Red-backed Shrike, Common and Lesser Whitethroats, Woodlark, Common Buzzard, Alpine Swift and Cirl Bunting to the day list. 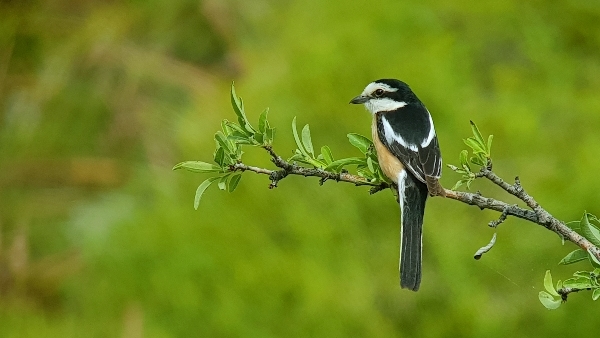 Whilst we were admiring a lovely male Cirl Bunting Mike called out a yellowish warbler in the bush behind the bunting. On scoping the warbler I declared we had found an Icterine Warbler, in the meantime another Lesser Whitethroat dropped into the bush with the bunting and a female Blackcap appeared across the track in another bush. A little further on we had incredible views of a Masked Shrike, what a stunning bird that one is, absolutely gorgeous. 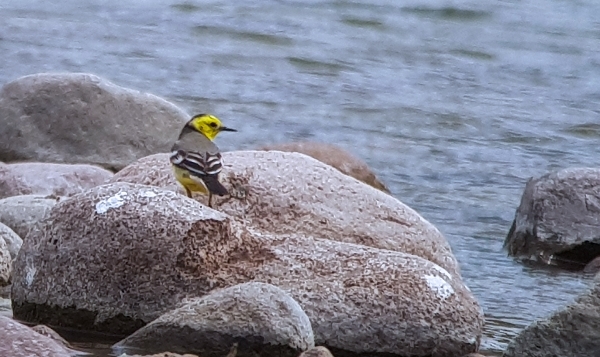 We eventually arrived at the ford, where a lot of flood alleviation work has opened the area, you can see a good length of the stream either side of the track. This alleviation work has its advantages, the river is now viewable, we saw a lot of birds there. As soon as we got out of the bus a Little Bittern flew off, oops, we inadvertently flushed that one. Then we flushed 3 Ruddy Shelduck, a Purple Heron and a Little Egret or was it a Marsh Harrier that came quartering over the stream?

A few waders also flew upstream, at least four Greenshanks were amongst them. We scoped Wood & Common Sandpipers, Little Stint and Temminck’s Stint and then Mike called a Citrine Wagtail, a hat-trick of good birds for him in the last hour.

Our walk into the fig plantation produced a couple Spotted Flycatchers and a dozen European Bee-eaters, it was too windy for most species, we heard Cetti’s and Eastern Olivaceous Warbler before we left. The tiny chapel just along the track was also windswept, we didn’t stay long finding more Spotted Flycatchers. 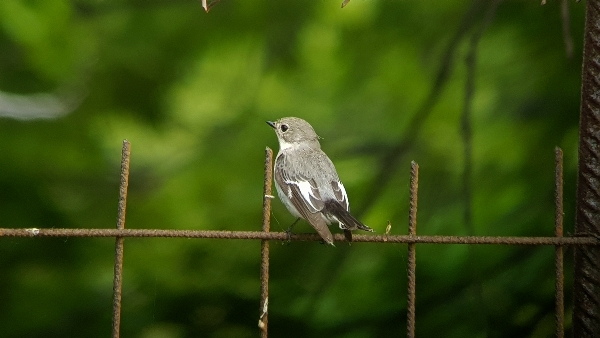 The last part of the track rises up past the ‘Little Owl’ farm, where indeed we found a Little Owl and then drops down into Sigri. Along this section we found an interesting looking wheatear which resembled a Finsch’s Wheatear with white all down the middle of its back, we wrote it off after more careful observation and the fact that it was pair with a female Black-eared Wheatear. 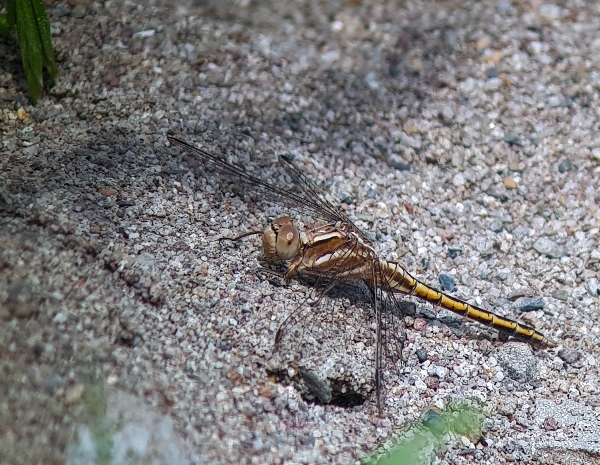 Small Skimmer, the only dragonfly recorded so far

Our last stop before Sigri was the old Cheese making buildings (used to called a sanatorium), the gardens have many shrubs and trees and is usually good for flycatchers and warblers. We saw a couple of Spotted Flycatchers and a few Warblers. The warblers were Lesser whitethroat and Sardinian.

We ate a lovely lunch in Sigri by the side of the harbour which is being developed into a marina with a docking area for small cruise-liners, how nice!

For the next two hours we visited both the upper and lower fords at Faneromeni. On the approach track we stopped to view a fig plantation  and along a sheltered fence-line we found several Flyctchers, Spotted and Pied. With the Flycatchers was another superb male Masked Shrike. 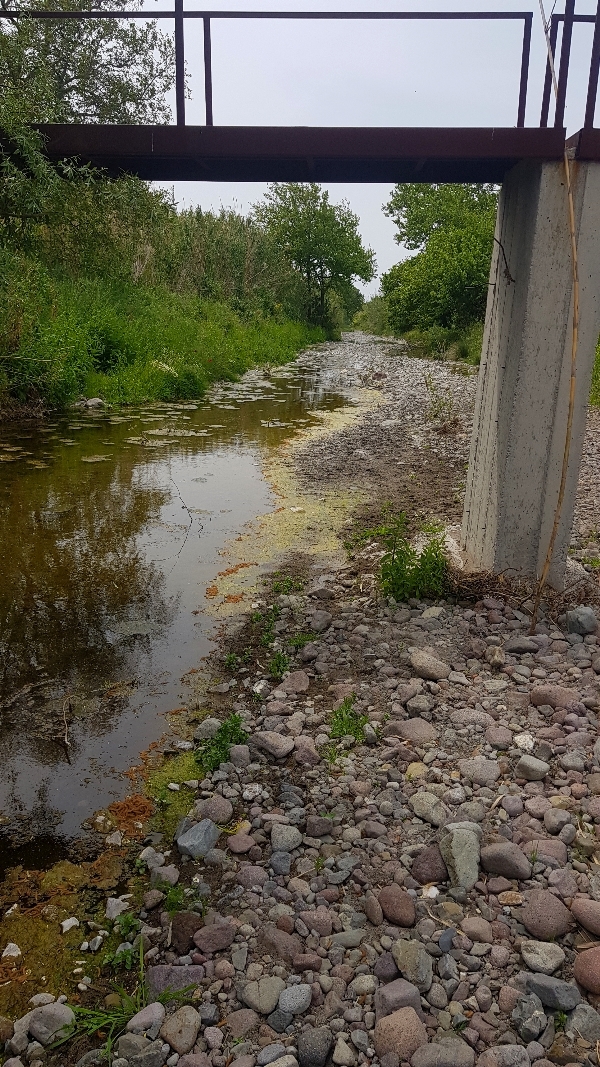 looking downstream from the Upper Ford at Farenomeni, should bring memories for a lot of you?

At the upper ford we saw Little Bittern, over 40 Wood Sandpipers, Temminck’s Stint, Moorhen, Ruff, White Wagtail, Blue-headed Yellow Wagtail and a stunning male Citrine Wagtail. A walk along the track was abandoned because of the strong wind, we did see a couple of Blackcaps.

The lower ford held more birds, we thought we found a Thrush Nightingale, a bird on the side of the stream with its tail cocked and a distinct streaked breast, I am awaiting other opinions of our poor record pictures before I claim it. We added Little Ringed Plover and Spanish Sparrow as well as seeing many more sandpipers.

At the beach we scoped the bay and found a constant stream of Yelkouan Shearwaters flying in both directions and with them we could see the much larger Scopoli’s Shearwater, a few Yellow Wagtails were our last sighting of our visit. We set off for home at 5:15pm arriving around 6:30pm, it had been another excellent long day in field with some brilliant birding.