WEATHER: dull and overcast for most of the day, light winds but felt cold. Top temp 15C

We were up with the lark once again (I can’t seem to fatigue this group!) and off to the salt pans we went in search of the Great Spotted Cuckoo which appears for everyone else except us. We took the track to Tsiknias River and after crossing the ford we drove across to the salt pans.

We parked by the smelly pumping station where the cuckoo has been roosting and began our search. We found Greenfinches, Goldfinches, Chaffinches and Spanish Sparrows. A large number of Barn Swallows had obviously roosted there and together with House Martins and few Red-rumped Swallows lined the wires, there was no sight nor sound of the cuckoo.

The eastern side of the salt pans has been producing some good birds lately so we tried our luck there. From the raised hide we saw a single Dalmatian Pelican, 7 Grey Plover, 22 Curlew Sandpipers, dozen of Little Stints, Ruffs and the usual high numbers of Black-winged Stilts, Avocets, Wood Sandpipers, Great Flamingos and terns.

We got back for breakfast at 7:30 after passing the cuckoo site once more without stopping, we crossed the river Tsiknias at the ford where a little earlier two guys had seen a Great Bittern fly over, you can’t be everywhere at the right time?

Following breakfast we set off for Ipsilou Monastery in the west of the island, we chose the central route through the island passing through Dafia and Filia, Skalochori, Vatousa and Andissa, we made a few stops along this route.

At the Radio mast above Filia we turned onto a dirt track and parked the bus, at the track side we saw many Tongue Orchids and the variety of wild flowers was stunning. Our target bird was heard almost immediately but it took us a while to track down the Eastern Bonelli’s Warbler, Eventually we got great views of it and we eventually located one from the bus on our return. 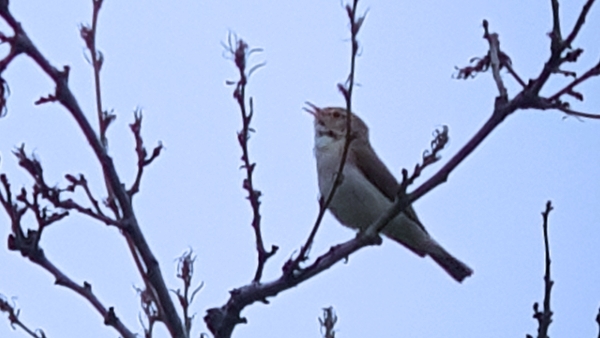 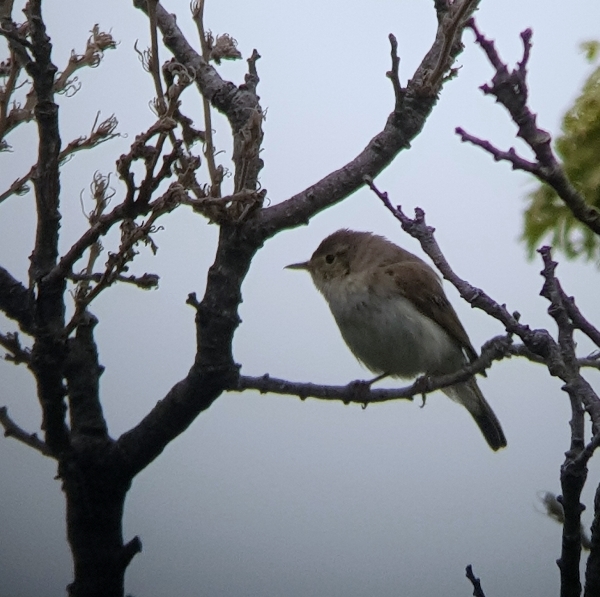 Further along the track we searched for Middle Spotted Woodpecker without any joy, but we did see Masked Shrike, Cirl Bunting, our first Wren of the trip and we heard Turtle Doves.

Between Skalochori and Andissa you pass through a steep side valley called Lardia and despite a lot of road works going on we stopped to watch some nice species. A Blue Rock Thrush was singing from a pinnacle of rock and performing its display flight, a Black-eared Wheatear was also singing and we found a Subalpine doing the same. We expected to see Crag Martins but none were on show, a Short-toed Eagle flew over us just before we left.

Above Andissa you come to the 'Eresos crossroads' (which is soon to be a roundabout) and just after that a rocky area of scrub is home to a small population of Isabelline Wheatears, we stopped to look for them. In a small bush we found an Isabelline Wheatear with a Cretzschmar's Bunting and a Red-backed Shrike!! Wow!! 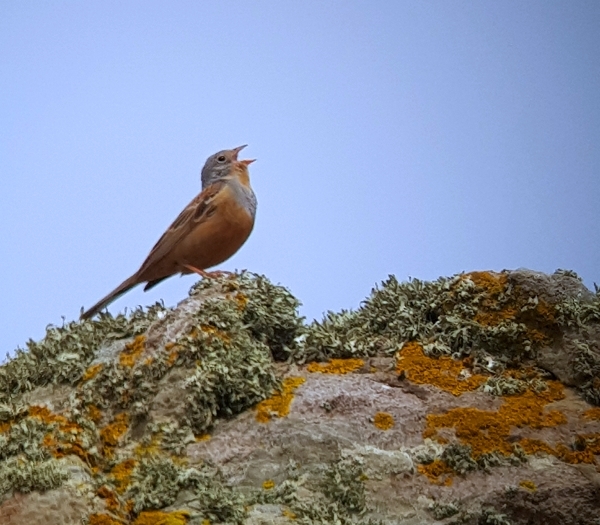 In this small area we could hear four different buntings singing, amazing, and I'm happy to say that this did not include Corn Bunting!! We heard and saw Black-headed, Cretzschmar’s, Cirl and Cinereous Buntings within a few meters of one another. In a tree on the farthest ridge, we scoped a male Golden Oriole, then two more appeared and then another. Two more Short-toed Eagles and a Long-legged Buzzard flew over just before we left, what an amazing 30 minutes we just had. 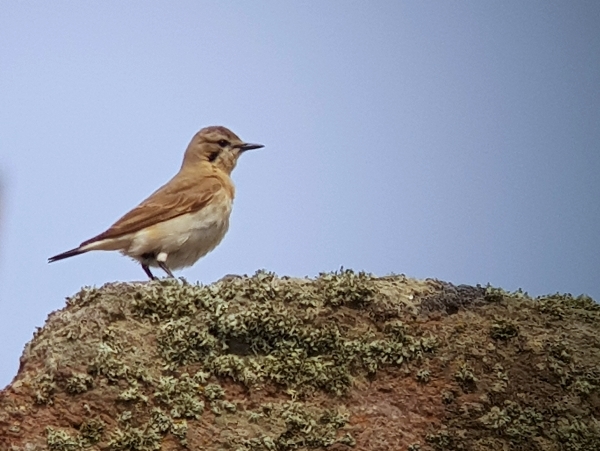 At the base of the rocky pinnacle on which the Ipsilou Monastery stands we parked the bus and began walking up the slope, at the base of the slope we found our first Northern Wheatear with more Black-eared Wheatears and a couple more Cretzschmar’s Buntings.

It was quite windy and it wasn’t until we reached some shelter that we found a few birds in the trees on the steep rocky slopes. We could hear a distant Hoopoe producing its monotonous call and we found some Spotted Flycatchers, Blackcaps and Mike found his very own Sombre Tit. We spent a long time trying to locate a singing Cinereous Bunting, most of the group wanted a better look after such a short glimpse last time. Mike located it and we all had 'in the scope' views, fantastic. We ate our picnic lunch high up on the slope before descending back to the main road. 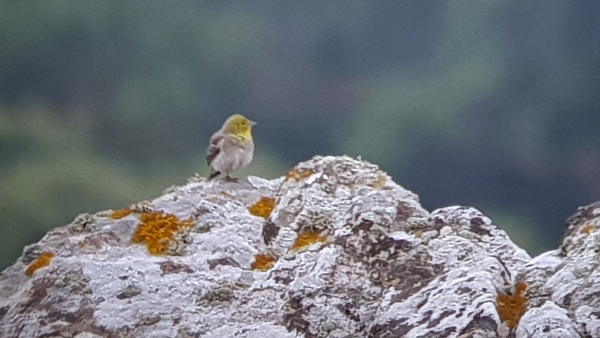 record shot of the Cinereous Bunting which was along way off!

A Barred Warbler had been sighted near Sigri so we decided to go and try to find it. At Faneromeni fields we found the site where the bird had been seen, we staked it out. We saw Woodchat Shrike, Cetti’s Warbler, Lesser Whitethroat, Black-headed Bunting and 6 more Short-toed Eagles. The air was full of hirundines, hundreds of them and at least 50 Bee-eaters, it was really quite noisy.

Just as we decided to leave and began walking away from the site, the Barred Warbler made its buzzing alarm call, we quickly turned around and there was the bird, it was as if it called us back to show itself off? It was a stunning male, we waited around for another 30 minutes getting better views and as time went on, it showed a little better but it never sat out in the open.

Back on the road we set off for Eresos along the bumpy coastal track from Sigri but no before we had had a coffee break in the centre of Sigri. We made only one stop in the Meladia Valley at the fig plantation near the ford. We were hoping for a siting of Roller as some had been seen earlier at this site.

Our short walk was curtailed by a rain shower, it wasn’t heavy but it was enough to annoy us and get us wet. We found our first Lesser Grey Shrike along with Red-backed and Woodchat Shrike. Once again the air was alive with sound of Bee-eaters, we also saw a few Turtle Doves, Spotted Flycatchers, Short-toed Eagle, Marsh Harrier a Common Kestrel and our first Tree Pipit of the trip. 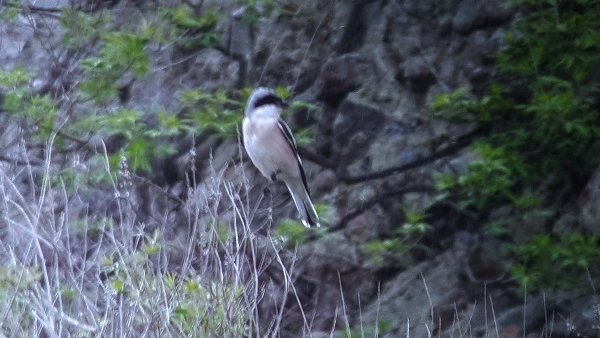 a poor record shot of the Lesser Grey Shrike, taken in the Meladia Valley during a rain shower

Time ran out, it was now 5pm and we had a long way to go, so we set off along the bumpy track to Eresos, we stopped to watch our first Common Cuckoo and we saw many more buntings along the way. A Little Owl was the only other notable sighting as we made our way eastward to Skal Kalloni, we arrived at 6:10pm.

Our birding wasn’t over yet because after dinner a few of us went out to look for owls. In the village we saw at least three Scops Owls under torchlight, but we dipped on Long-eared and Barn Owls. It rained the whole time we were out so that didn’t help us.