WEATHER: dull and overcast, rasin for most of the morning, brighter later. Top temp 18C

We had a mixed bag of success today with some good results earlier and some dips later in the day.  Our pre-breakfast soiree was to the Potamia Valley and specifically to the old Potamia Reservoir. We knew that a small roost of Black-crowned Night Herons were there and so we set off to find them. Only two of my group made it for this pre-breakfast meet!! So Paul, John and myself drove the short distance to the reservoir and quickly found the Night Heron, a bonus bird was a female Little Crake, we also saw Ruddy Shelduck, Little Grebe, Moorhen, Mallard (in flight) and a Grey Heron. 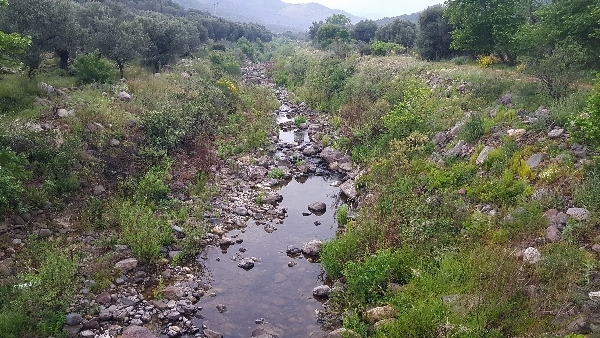 A little further up the valley we tried to locate a Crag Martin and a Middle Spotted Woodpecker without success but we did see Cirl Bunting, Jay, Black-headed Bunting and Raven.

After breakfast we set off to the Salt Pans, we drove across the ford at the River Tsiknias noting Common & Wood Sandpipers in the water, Bee-eaters on the wires and Olivaceous, Cetti’s, Reed & Great Reed all singing and plenty of Black-headed Buntings on the bushes. A Whinchat on the fence line was joined by Crested larks and European Bee-eaters.

We parked near the smelly pumping station and for the third time we began our search for the Great Spotted Cuckoo which has shown every day since we had arrived, but not to us. We relocated the Spur-winged plover which was much closer than before, and we saw all the usual species at the pans. 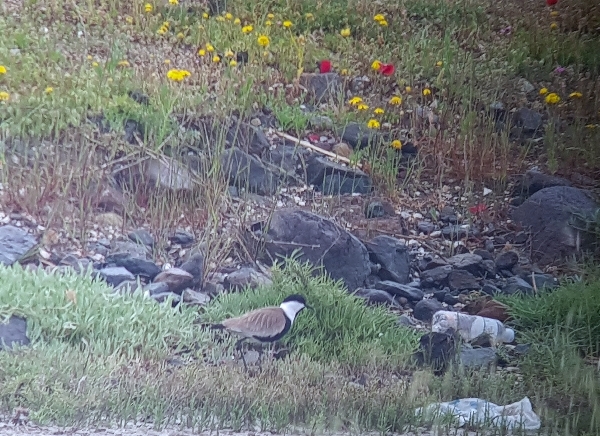 Spur-winged Plover below the bank of flowers

Then we struck lucky as the Cuckoo appeared, it landed in a broom bush not too far away and sat still for a while. A Corn Bunting approached, we thought to mob the cuckoo, but the juvenile Cuckoo thought the bunting was going to feed it and began begging for food. The cuckoo actually chased the bunting around in the bush to try to get fed!! The two birds disappeared beyond the grassy bank and never returned. Well, we were made up after that, at last our target bird was in the bag, whoopee!! 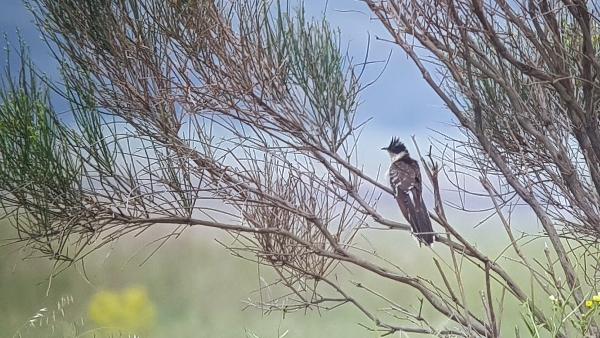 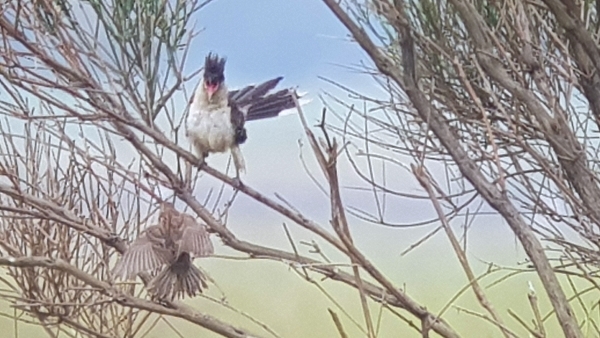 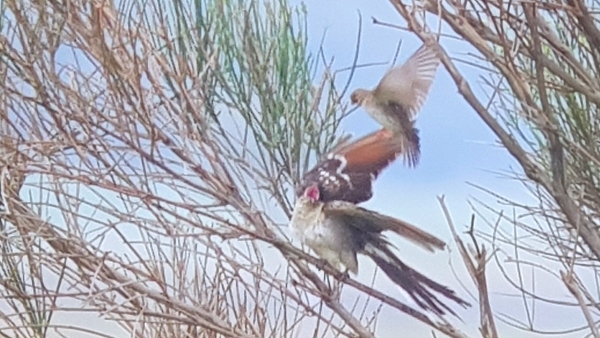 Our next target was the Middle Spotted Woodpecker we hoped to find one in the Napi Valley so off we went. The rain got heavier as we drove through Agias Pareskevi and into the Napi Valley. We turned onto a track just short of the village of Napi and parked the bus. We stayed inside the bus until the rain eased and then stopped. 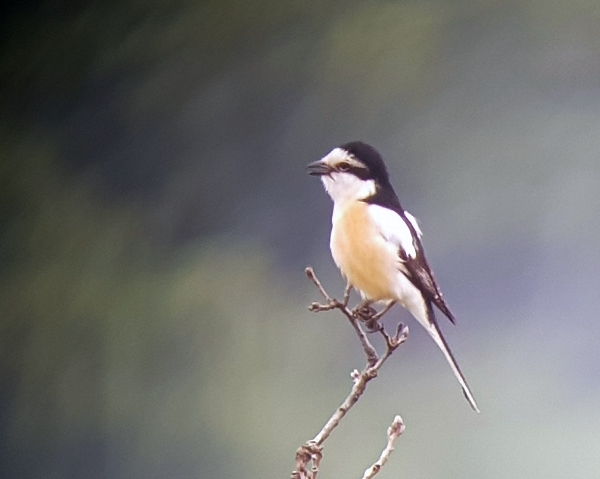 another shot of the stunning Masked Shrike

The track was full of birds we had an amazing time finding many species and enjoying some great spectacles. The Masked Shrike in my opinion is the most striking of all shrikes and photographs cannot do it justice, it is stunning. We found Red-backed and Woodchat Shrikes too as well as Black-headed and Cirl Buntings, Blue and Great Tits, Jays, Ravens,

After about a kilometer we stopped in an open area where we could scan a huge wooded hillside where a standing dead tree had several woodpecker holes in it. We staked out the dead tree which was about half a kilometer away and sure enough a Middle Spotted Woodpecker appeared. It went inside the hole and disappeared. Then a Persian Squirrel jumped onto the tree and woodpecker poked it’s head out of the hole for a while. We all got to see this very distant woodpecker but of course most the group were not happy with the sighting.

In the meantime we watched Golden Orioles and we heard Turtle Doves, a distant Hoopoe and we saw a bunch of 7 Ravens. On the way back we saw a Middle Spotted Woodpecker fly across the track ahead of us,  had a Turtle Dove in the scope and we enjoyed the shrikes once again.

We then drove through the village of Napi and entered, in my opinion,  the real Napi Valley. It stretched out in front of us, below the road, we had terrific panoramic views of a vast area of woodland and pastures.

A few Red-backed Shrikes were sen and a Lesser Grey Shrike was an unexpected bonus. It took us a while but we found our target bird, the Sombre Tit. A pair of them was collecting food and spent time along the roadside fence and nearby trees. With the bird in the bag we retired for lunch which was taken in the village of Agias Paraskevi a few kilometers back down the valley.

Our next destination is called Madaros (in the past we called it the “dead goat-pit” track) but we took a detour to get there. The detour involved driving back through the salt pans to the River Tsiknias to look for a Roller which had been reported this morning. We stopped along the west track of the salt pans to watch a huge flock of terns, there was hundreds of them. Two to three hundred Whiskered Terns were joined by about twenty -thirty White-winged Terns, they formed a huge mass and performed a murmuration like starlings do, they flew high and came back down to water level, then high again. Undecided about whether to leave or not they eventually flew down to water level and spread out. 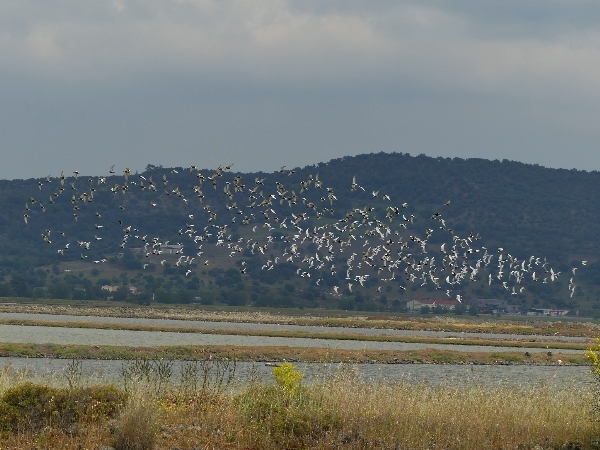 some of the terns over the salt pans, taken by Sue Hayes

We left the terns and drove along the track to the River Tsiknias and followed a track upriver back to the main road, we never saw a Roller so we drove to Madaros which was just north of where we were.

A search for a Rufous Bush Robin went unrewarded but many birds were singing and flitting about in the bushes, mainly Shrikes again but also Subalpine and Orphean Warblers, Cirl and Black-headed Buntings and lots of finches. 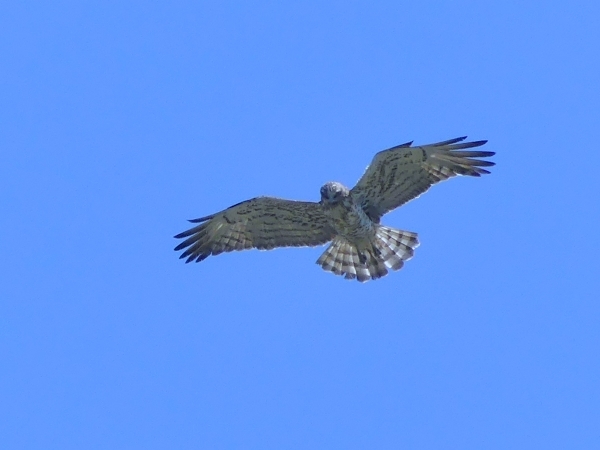 The clouds cleared and the sun came out so we spent about an hour watching a small passage of raptors above the nearest ridge, the birds were using the thermals to gain height before drifting north. We saw several Black Storks, at least 6 Short-toed Eagles, Common Kestrel, Long-legged and a single Honey Buzzard before we left. 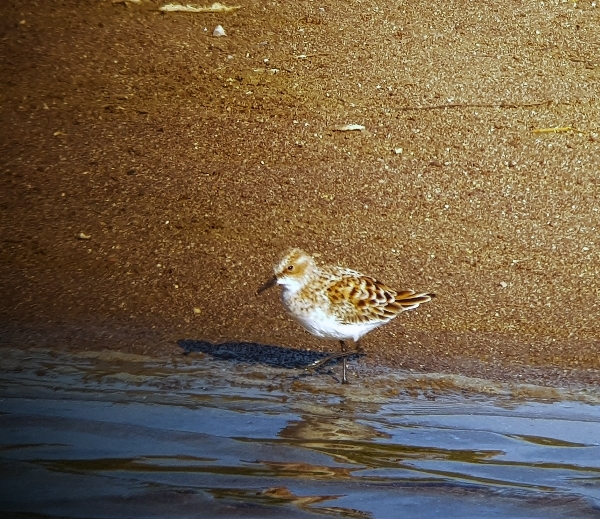 It also got quite windy too, our last port of call was a track near Metochi Lake where a Wryneck had been seen earlier, but it was site where the wind was quite bad and left us with little hope of seeing much at all. We gave up at 5:30pm and drove the short distance back to the hotel for an early shower.