WEATHER: at last a nice day with full on sunshine, however a strong, gusty wind followed us all day. Top temp 18C

Our search for the Rufous Bush Robin continued today with a walk along the shore near the east  bank of the Tsiknias River. This species should be arriving daily and the males set out their stall in traditional breeding sites, we hoped to find one of those this morning.

We parked near the east bank of the river and walked down to the river mouth where a small flock of Greater Flamingos were feeding and were joined by Common Shelduck, Avocet, Grey Plover, Little Stints and a Little Egret. On the sand-bar we saw lots of Common & Little Terns and the ever present Yellow-legged Gull. 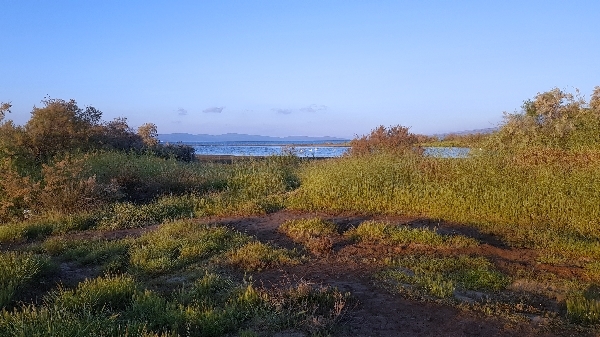 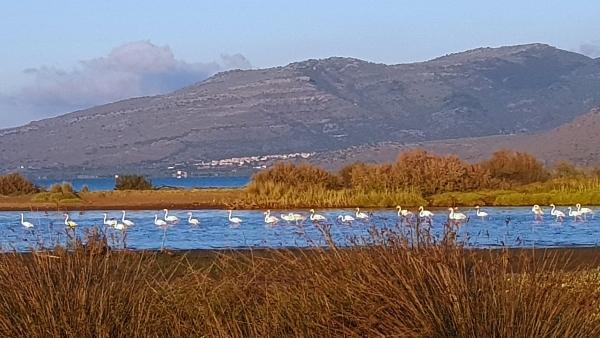 Our walk, in windy conditions, proved fruitless but it was a beautiful morning and it was really lovely out there. We saw my good friends the Crested Lark and the Corn Bunting, as well as Olivaceous Warblers, Black-headed Bunting, Yellow Wagtail and Spanish Sparrows. 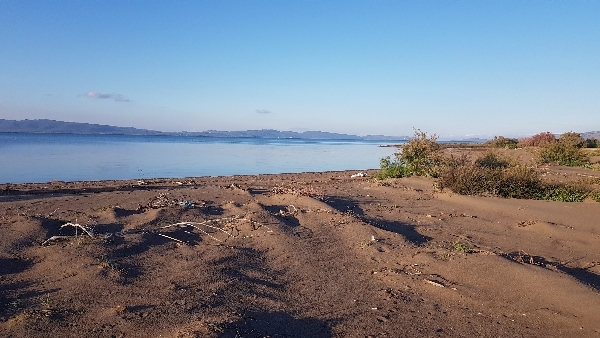 After reports of lots of species being seen in the Meladia Valley yesterday my group decided that is where we should go today and so after breakfast off we went. Our drive along the beautiful coast road from Kalloni to Eresos was completed with just one stop, were on a mission! We pulled over above a river a few kilometers past Agra and saw Spotted Flycatchers, Turtle Dove, Black-eared Wheatear and we heard a couple of Common Nightingales.

Once we got onto the dirt track to Sigri at Eresos we slowed down and began birding. There did appear to be a lot more birds around especially Shrikes and Flycatchers. It was lovely to see so many Spotted Flycatchers as they are in a steep decline back home in the UK.

By the time we reached sea-level near the Meladia Ford we had seen dozens of Red-backed and Woodchat Shrikes, Spotted Flycatchers and a few of the local Buntings. We parked the bus and watched a Western Rock Nuthatch nest site for a while, the adult birds were feeding young going back and forth to the mud nest attached to the rock face. A Woodlark was singing from a telegraph wire and we had a couple of Falcons fly over. 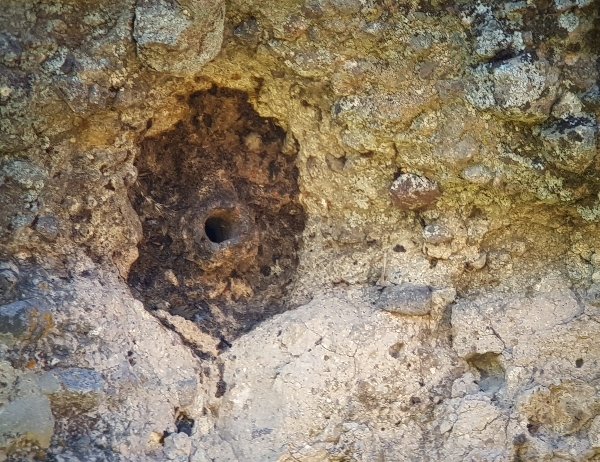 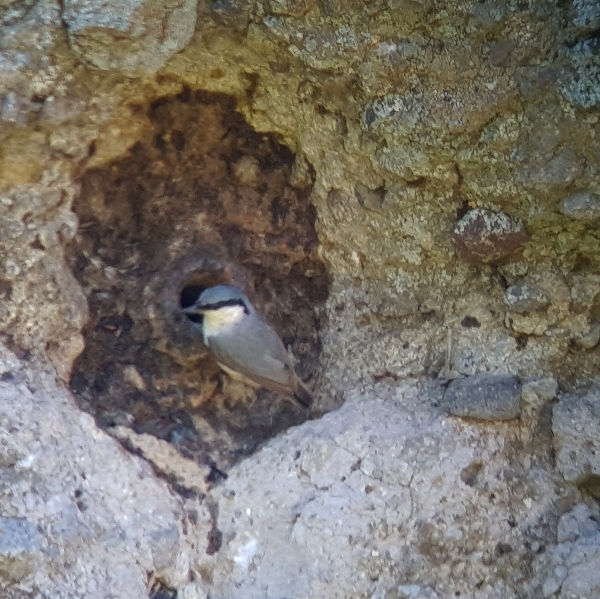 Falcon number one was a female Red-footed falcon and Falcon number two drifted over five minutes later was a pale morph Eleanora’s Falcon, wow, how good was that? We saw a SDhort-toed Eagle and a Long-legged Buzzard not long after that.

We took a walk towards the ford checking the scrub area to our right and although we had gusty wind there times when the dropped completely, so it was quite pleasant at times. We soon picked a number of species, Orphean Warblers seemed to be fltting around in good numbers, we saw three icterine Warblers, Common and Lesser Whitethroats, Blackcaps and Mike Hails, lagging behind us, photographed a beautiful Wood Warbler. 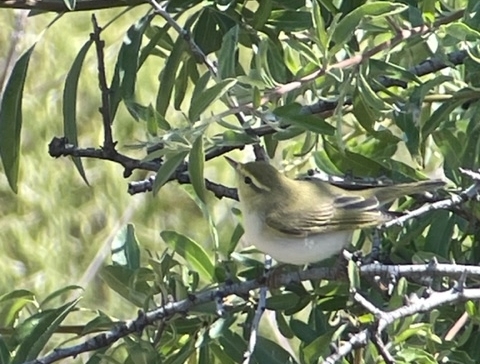 By the time we reached the ford we had seen a good number of warblers including four Icterine Warblers (I rarely seen more than one or two on this trip, it has been a good year for them). We also added two more shrikes to our list as both Lesser Grey and Masked Shrikes appeared. Black-headed Buntings were quite numerous too, but I think Spotted Flycatcher had to be the most common species. 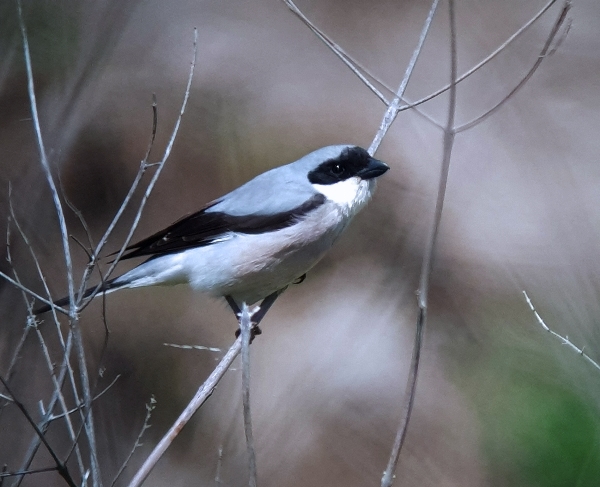 At the ford we flushed a Little Bittern and watched more flycatchers, this time we saw a single female Pied Flycatcher and a few birds were coming to drink, Linnets, Greenfinch and Cretzschmar’s Buntings. Whilst we ate our picnic lunch we saw a Peregrine Falcon drift over, a Common Buzzard hung on the wind above the nearest ridge and another Short-toed Eagle ‘hovered’ nearby.

European Bee-eaters were in good numbers too and hirundines (Swallows and Martins) flew around in clouds at times. We moved onto the chapel area after searching the nearby scrub for Rufous Bush obin without luck. Our best birding of the day was we spent the next hour at the little Chapel about 1 kilometer past the ford. We had seen a very distant Montagu’s Harrier flying around  beyond the chapel area so we thought getting a little closer was a good idea! 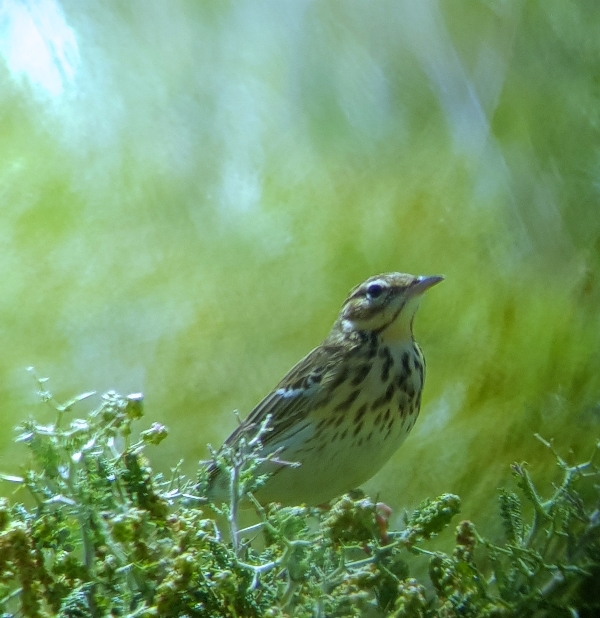 As we arrived a guy called us over and pointed out a European Roller sitting on a rock!!! Wow, fantastic one of our most wanted species in the bag. It was distant but the beautiful blue colour was amazing. We then concentrated our efforts to birds a little closer, we found a Common Redstart in the trees around the chapel, it flew out onto some rocks, about four Spotted Flycatchers were noted with Spanish Sparrows, Lesser Whitethroat and Icterine Warbler also seen in the scrub around the back of the chapel. 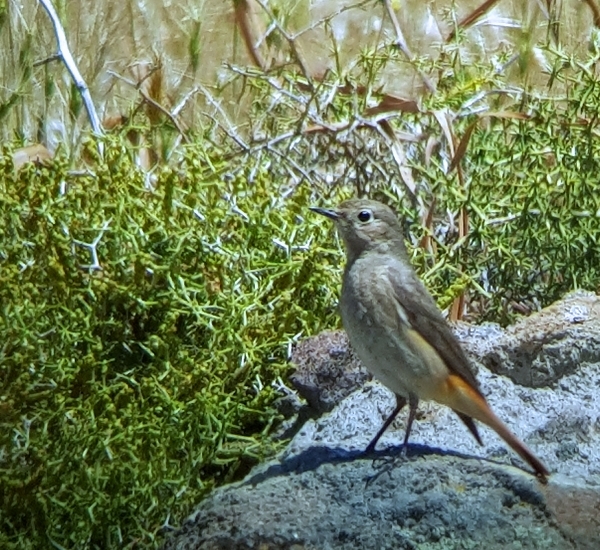 The Montagu’s Harrier reappeared, it was a female (ringtail) most probably a 2cy bird not a full grown adult. Mike picked out a distant male Common Redstart and we saw a lot more Red-backed Shrikes in this area. At this point we decided to turn around and go back to Kalloni via Eresos instead of driving to Sigi, we knew by doing this we would miss the opportunity of seeing Lesser Kestrel, but the group thought that more new birds were possible around the Salt Pans.

We stopped in Eresos for a coffee break before driving directly back to the Salt Pans at Kalloni. Most of the wading birds had departed and so had the huge number of terns seen  yesterday, we did seen White-winged (8), Whiskered (1), Common and Little Terns as well as small numbers of Wood Sandpipers, Ruff, Little Stint, Avocets and Black-winged Stilts.

In the fields between the salt pans and the shoreline of the Gulf of Kalloni we saw a single sub-adult male Red-footed Falcon sitting on the ground (it did fly around later) and nearby we found two Collared Pratincoles doing the same. 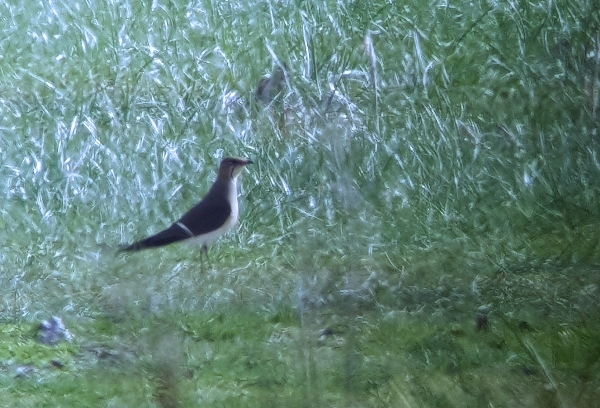 We search the salt pans for a Eurasian Spoonbill that had been reported and whilst we were doing so a Dalmatian Pelican flew over us. A very close Short-toed Eagle did the same giving the photographers some great picture opportunities.

Finally we spent some time in the raised hide on the east track of the salt pans scanning once more for the Spoonbill without luck. It was now approaching 5:30pm so we called it a day. As this was our last night, we decided to eat dinner in the main square of the village.

We had a lovely meal, sitting outside in a covered area near the beach! A good banter had us all laughing before we each gave our bird of the trip, as usual many birds stuck out in our minds but it was experiences that have lasting memories and we went through a few of those before strolling sedately back to the hotel.