From the deepest depths of the tropical rainforest in Guyana to the wet, windy and very cold Morecambe Bay, it doesn't get much worse than this............how did I possibly agree to lead a weekend trip in such a place so devoid of light, colour, sun and warmth?

Up at 4:30am and on the road by 5:15, it was raining, it was dark and it was cold, but I still went! I drove for 6 hours with a couple breaks and lots of raodworks and traffic jams, my journey was from Somerset to Peeston, Lancashire. Where I collected 9 nine members (it should have been 10 but one didn't come because it was too cold - I don't blame him) of the CENTRAL LONDON RSPB MEMBER'S GROUP from Preston Railway Station at 11:38am their train from London was right on time. 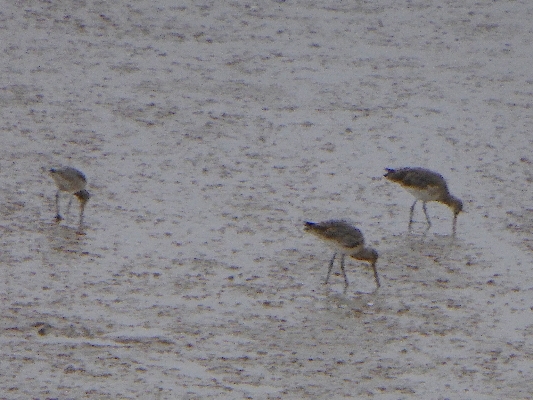 BLACK-TAILED GODWITS above and BAR-TAILED GIDWITS below 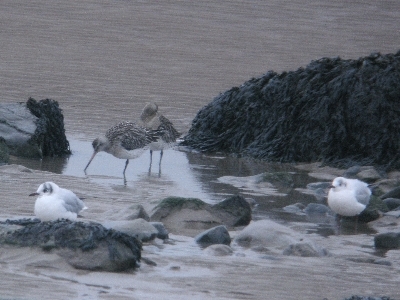 We then drove another hour to Morecambe Bay where we dropped off our luggage before braving the weather for an afternoon of birding. Our hotel was on the seafront so all we had to do to see birds was cross the road which we duly did. The tide was low, vast tracts of exposed mud and sand spread out as far as the eye could see - wich wasn't very far because of the dull, misty sky. Pools of water still filled the lower sand dunes but the while area was covered in birds. Black-tauled Godwits, Northern Lapwing, Eurasian Oystercatcher, Common Redshank, Eurasian Curlew and Common Shelduck were present in good numbers. We picked out fewer numbers of Eider Duck, Red-breasted Merganser, Ruddy Turnstone and a single Red Knot.

Further along the Bay we stopped to watch Northern Pintail, Eurasian Wigeon, Dunlin and even more Northern Lapwings, all the 5 apecies of 'common' gulls were also present with Great Cormorant.

We drove round to Heysham and parked near to the ferry port where we added Bar-tailed Godwit to our list and had better views of other species. At Heysham Nature Reserve we parked near to the Power Station and as we stepped off the bus into the rain aistlecThrysh began singing from a small metal mast. This burd is also called the 'storm-cock' because of its habit of singing during a storm, how apt it was then as the rain increased and the wind oucked up. Lo and behold tge very next bird in the scope was a Song Thrush, this bird also burst into song, uncanny, strange, why would this bird start singing in the rain? 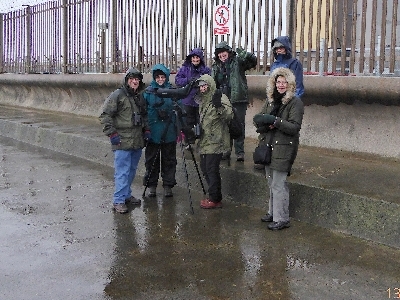 SOME OF THE 'CRAZY-GANG'  why do they want to watch birds in the pouring rain?

We walked to the sea-wall and along the concrete causeway that separates the power station from the sea, a Peregrine flew off the top of the power station building and more Eurasian Wigeon were found on the shingle banks. A good selection of birds were present but the weather was too bad fir us to enjoy our visit, so we packed in and after making a brief stop in the reserve we headed back to the hotel.

We had a superb meal in hotel's 'ASPECT' room, the bird count was 36 species with nine very cold birders watching them.