Another day of glorious weather, but without the cooling breeze it got much warmer and a little humid. We left the hotel before 8am and made a third visit to Oued Sous, we literally got out of the bus and scanned the mud-flats from where we stood. Plenty of birds were out there but none of them were ‘new’ sightings. Osprey, Greater Flamingo, Slender-billed Gull, Bar-tailed Godwit, Red Knot, Grey Plover and Curlew Sandpiper were just a few of the species seen. 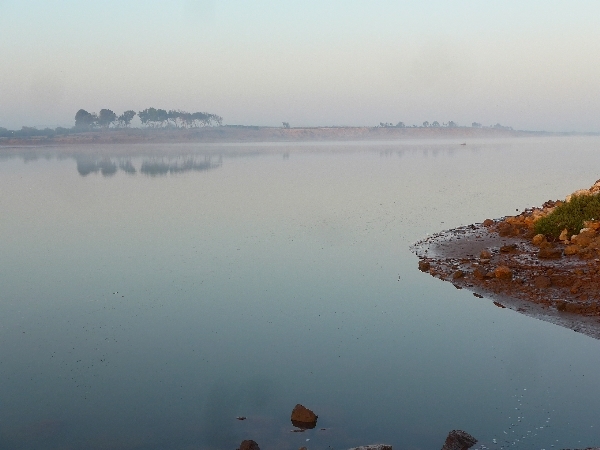 Oued Sous on a beautiful, calm morning - oh to be in England now that March is here.....not! 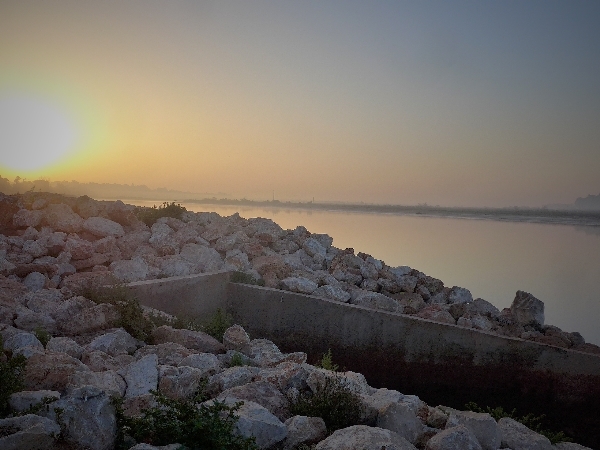 For the next hour we drove north from Agadir along the coast road making one stop at a sandy bay to look at a large flock of roosting gulls, we saw Audouin’s Gull with the common gull species and a dozen Sandwich Terns.

At Cape Rhir we looked out over a calm blue sea, dozens of Northern Gannets were passing, heading northward, we also saw a single Great Skua, a single Manx Shearwater and we had two or three sightings of Common Scoter. A couple of Gull-billed Terns also flew by and we found two Whimbrels on the rocks below us. 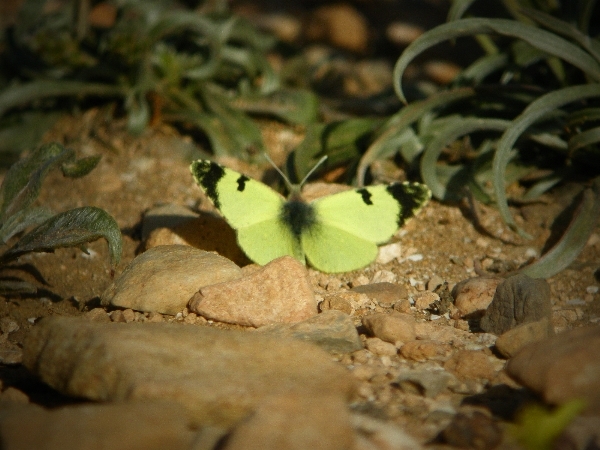 Greenish Black-tip taken on the slopes at Cape Rhir

From the Cape we drove a little further north to Tamri, we parked in the bay where a large lagoon lies adjacent to a massive reed-bed. We had high expectations of seeing several new species, but in reality it was very disappointing. We walked to the reed bed but not many species were calling or showing, in the lagoon we saw Grey Heron, Eurasian Coot, Eurasian Spoonbill, White Stork and an Audouin’s Gull.  Then a single BALD IBIS flew over and not long after another group of around 20 flew along the hillside, they appeared to land just over the brow,.

We quickly drove to where we thought the IBIS might be and sure enough they were standing on the rocky slope, we counted 16 individuals, they were just too far away for us to get reasonable photographs.  After watching them for a while we jumped back onto the bus and continued our journey. 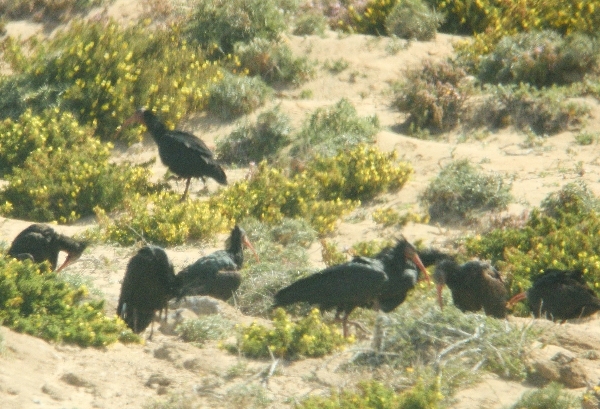 record shot of Bald Ibis and of the group watching them 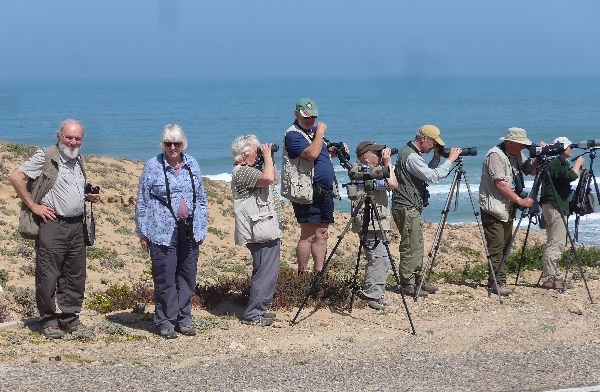 watching the Bald Ibis - except Mike and Lorna

We stopped in Tamri to pick up lunch supplies which was eaten as we travelled, Our next stop was in the Argan Forest just north of Tamandar. It was a good stop because the trees seemed alive with birds including several migrant species. We saw Eurasian Hoopoe, Woodchat Shrike, Long-legged Buzzard and we tracked down an Orphean Warbler that was in full song, a female bird was also seen.

A very surprising find was of a Pied Flycatcher we never expected this species, this early in the year, we also saw two or three Song Thrushes, these winter visitors were very elusive and kept well away from us. Sardinian Warbler, Common Whitethroat, Subalpine Warbler and a second Eurasian Hoopoe went onto the list too. 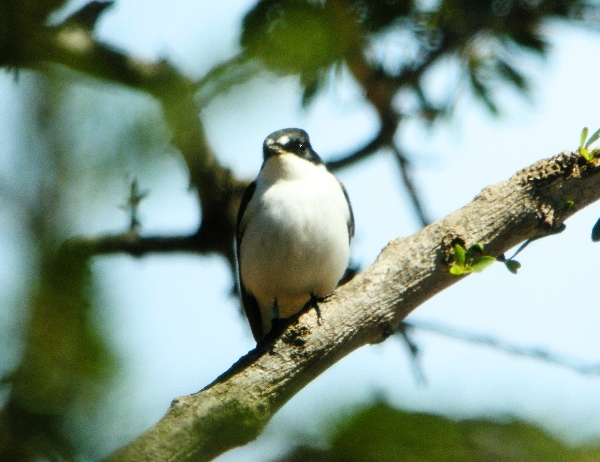 Across the main road, the vegetation was a little thicker, with wild barely growing below it. Last year we saw Black-crowned Tchagra there and within minutes we saw one this year too! It was good for the whole group to catch up with this enigmatic species, it looks like a type of shrike with its long, hooked bill but doesn’t act like one. 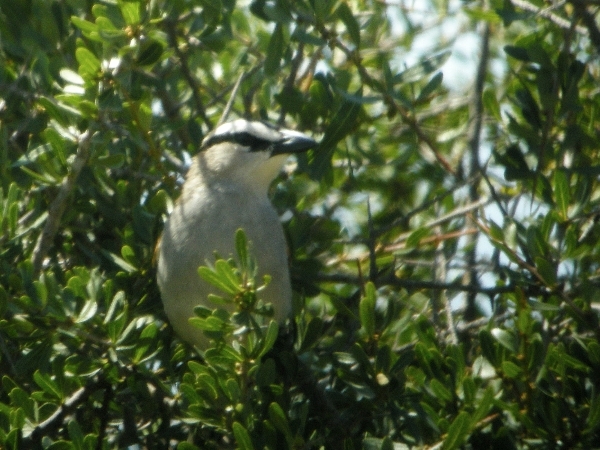 From the Argan forest we completed the last leg of the journey to Essaouira where we made our final birding stop of the day. Ahmed dropped us off by the side of a bridge where the Oued Ksob flows under, the current water level was quite low creating a series of pools. Our intention was to walk a couple of kilometers downstream to the beach along the stony riverbed.

We spent nearly two, most enjoyable hours, watching many species feeding in the pools or coming down to drink, it was amazing to think that such a wildlife paradise existed just a few hundred meters from the busy town centre of Essaouira. 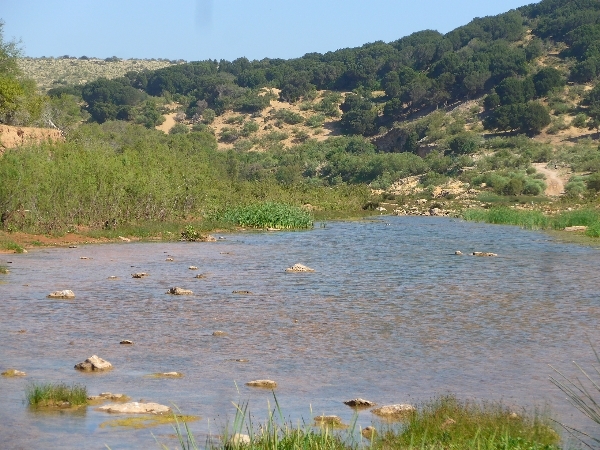 one of the pools along the Oued Ksob

Our main target species was the Brown-throated Martin (aka Plain Martin) which we found almost immediately, in fact there were dozens of them! We also searched for warblers in the scrub finding a good selection: Olivaceous, Reed, Sedge, Subalpine, Willow and Sardinian Warblers. 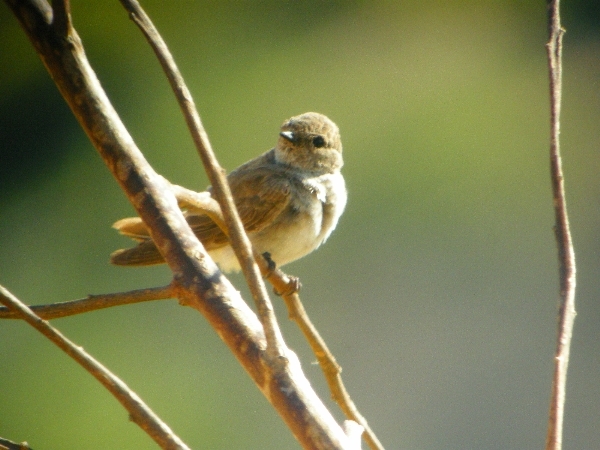 Brightly coloured Greenfinches, Goldfinches, Serins and Linnets came down to drink from the pools, where Common and Green Sandpipers were abundant. Black-winged Stilts, Greenshanks and Little-ringed Plovers made up the other waders seen, whilst Little & Cattle Egrets fed in or near the water, Moroccan & White Wagtails flitted about around the pools. On the boulders and in the scrub we listed Black-eared Wheatear, Woodchat Shrike, Southern Grey Shrike, Common Bulbul and a couple of Stone Curlews. 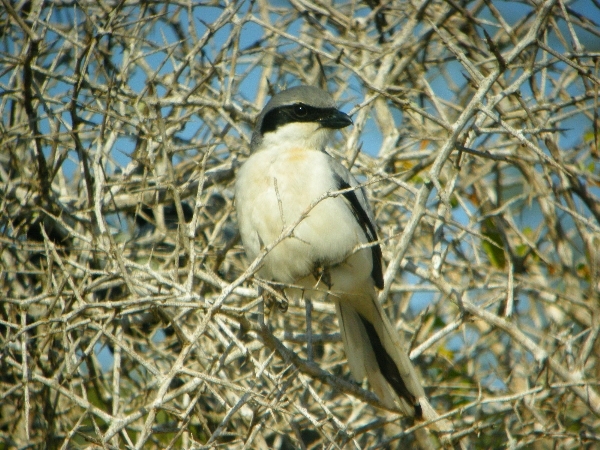 We finally arrived at a second bridge which gave us a viewing platform from which to scan the river as it flowed into the sea, a huge gull roost could be seen. A single Caspian Tern was in fact, the only tern amongst hundreds of gulls, we could also see a few Cormorants but nothing else. 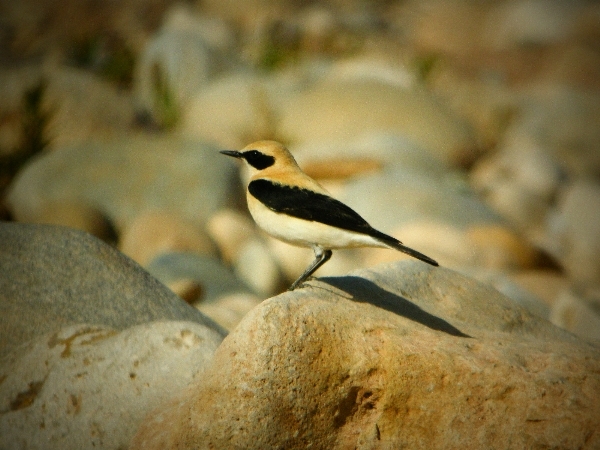 Walking towards town we found one last pool where we added Common Redshank to our day-list, but the light was fading, it was 6pm and we were due to be picked up. Ahmed turned up on time with the bus, we jumped on board and he drove us to town. We parked just outside the Walled Enclosure of the old town and walked to our hotel. The old town consisted of tightly packed buildings, narrow streets full of venders and a hoard of people. The sights, sounds, smells and the general hustle & bustle of the streets exuded a vibrant, thriving atmosphere - such a contrast to our stroll along the river. 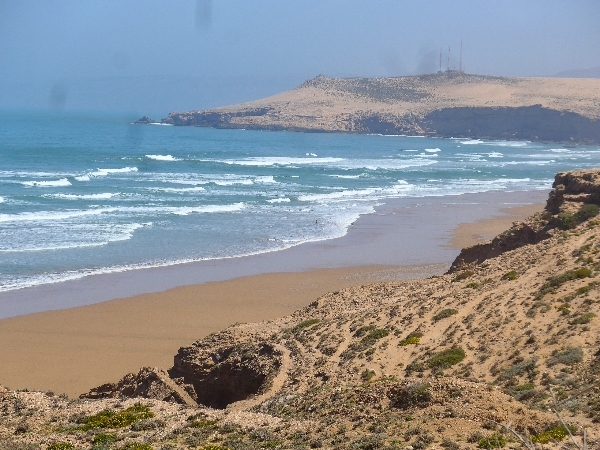 part of the beautiful coastline near Tamri

We ate a poor tajine for dinner, it was a pity as it was our last night, but the deserts were nice, followed by mint tea. We still have some birding time tomorrow with the opportunity of seeing some new species.