We had a smashing day, the weather was just perfect, bright sunshine, with a lovely cooling breeze which prevented the ground temperature getting too hot.

An early breakfast of crêpes, eggs, bread, cheese, jam, olives, cake and lovely coffee saw us out of the hotel before 7am, there was a chill in the air to start with. We set out on foot and walked across the ‘Regs’ (stony plains) just outside the hotel, soon we watching wheatears; both Northern and Black-eared varieties to start with then we added Thekla Lark and Red-rumped Wheatear. 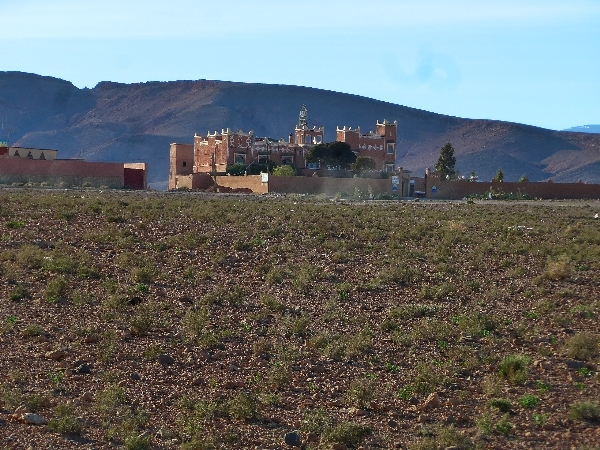 We made our way to a small area that is obviously used as a ‘rubble-tipping’ site, the mounds of rubbish attracted quite a few birds. We found a small flock of Greater Short-toed Larks, a pair of Temminck’s Larks, a single Trumpeter Finch and another pair of Red-rumped Wheatears. 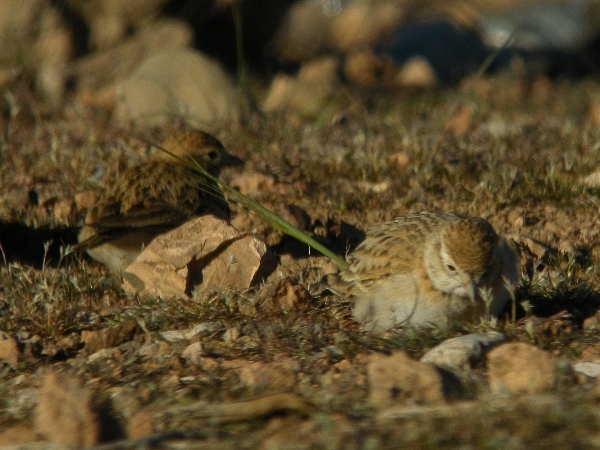 We jumped onto the bus and travelled the short distance to the Tagdilt track where we spent the next 2-3 hours visiting another rubbish tip, how nice. We found lots more Short-toed Larks, also our first Desert Wheatear and a pair of Bar-tailed Larks. 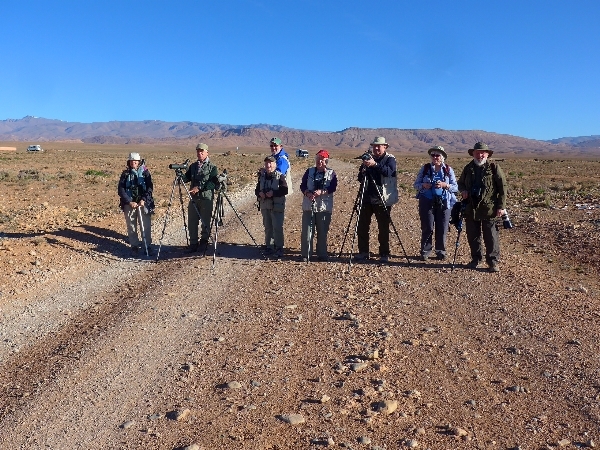 A distant raptor caught our eye, it was identified as a Marsh Harrier, but behind it we saw a ‘kettle’ of birds of prey, some 50 Black Kites were rising on the thermals in preparation for their continued migration northward.

Moving much closer to the rubbish site we saw Eurasian Hoopoe, White Wagtail, House Bunting and plenty of Red-rumped Wheatears. Then our star bird appeared, found by Rita, a female Thick-billed Lark, what a stonker and what a massive ‘hawfinch-type’ bill. The bird was calling as it rummaged in the rubbish and soon after a male bird flew in. 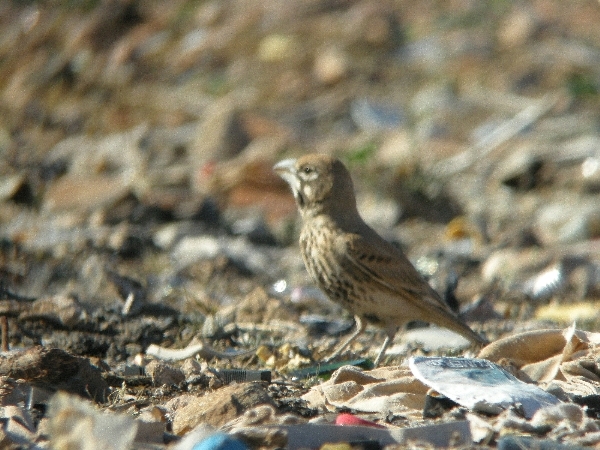 Our driver Ahmed had followed in the bus and was close by for us to climb aboard, we drove off the track onto the main road and then onto a tarmac lane found a few kilometers east, we were heading in the same direction as before towards Tagdilt.  We made a couple of stops, the first was at a location usually frequented by Sandgrouse, but alas none were there, we saw several Fat Sand Rats, a pair of Temminck’s Larks and a pair of Red-rumped Wheatears. We also stopped to look at raptors found by eagle-eyed Fiona. First a Lanner Falcon flew over before stooping out of sight, then she found a Long-legged Buzzard perched on the ground! 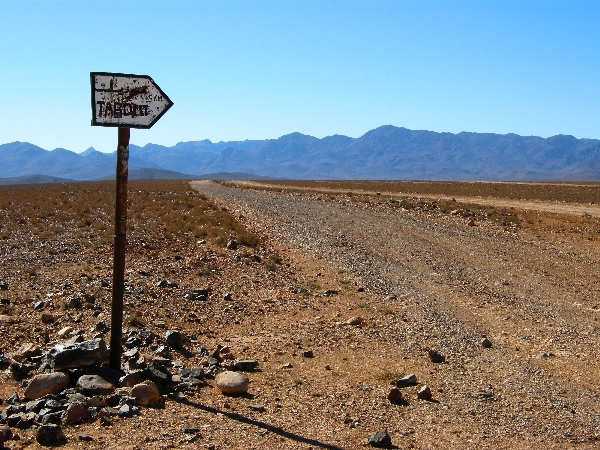 further along the track to Tagdilt

A little ‘oasis’ was fed by a trickling stream, it consisted of small orchards, clumps of almond trees, olive groves and little paddocks of alfalfa. The trees and shrubs held a number of bird species. Bonelli’s and Olivaceous Warblers, Common Redstart, Woodchat Shrike, Meadow Pipit, Northern Wheatear and a Common Quail walked right out in front of us. As we left we saw House Bunting, Black Redstart and another Eurasian Hoopoe.

For the remainder of the morning we drove back onto the Tagdilt dirt track and searched for Cream-coloured Coursers, we found over 20 of them and had excellent views. Another walk near some ruins, searching for Maghreb Wheatear, produced a surprising find in the shape of a Rock Bunting, we also saw White-crowned, Desert and Red-rumped  Wheatears but not the Maghreb. 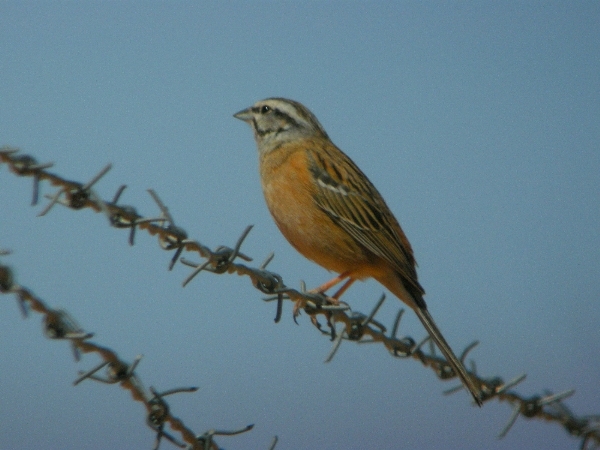 We next drove into town to buy lunch supplies, from there we drove into the Dades Valley following the river some 30km up into the famous Dades Gorge. We ate our picnic as we travelled but we still stopped at our usual ‘picnic-site’ which was a viewing area overlooking some fantastic geological rock formations. We saw Eurasian Hoopoe, Long-legged Buzzard, Crag Martin and a very distant Short-toed Eagle. 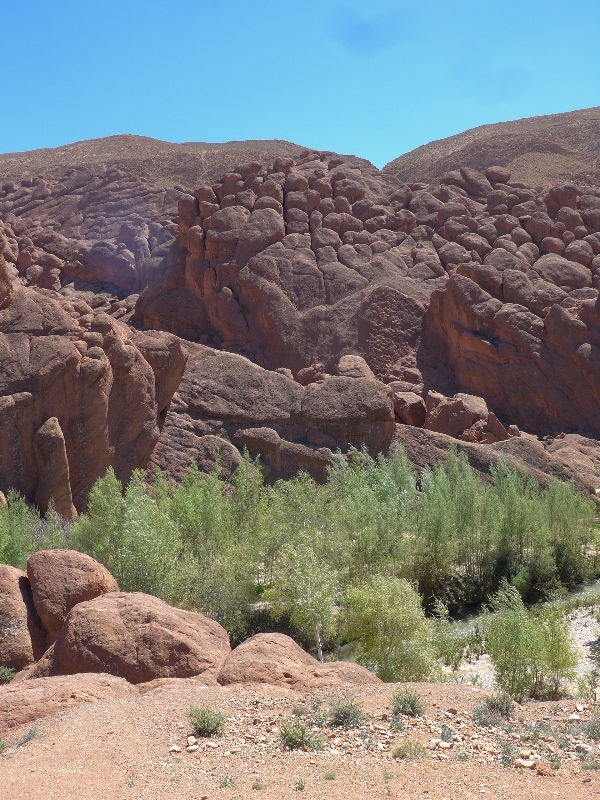 the strange rock formations in the valley du Dades

At the top of the gorge we spent a lot of time searching for Tristram’s Warbler, we walked a couple of kilometers before we eventually found a pair, they did reward us with a great show. After that we sat on the terrace of a restaurant at the head of the gorge, enjoying a cold drink and the scenery, it was a welcomed break, Fiona found a Eurasian Sparrowhawk perched in the shade on the far cliff-face, a smashing bird. 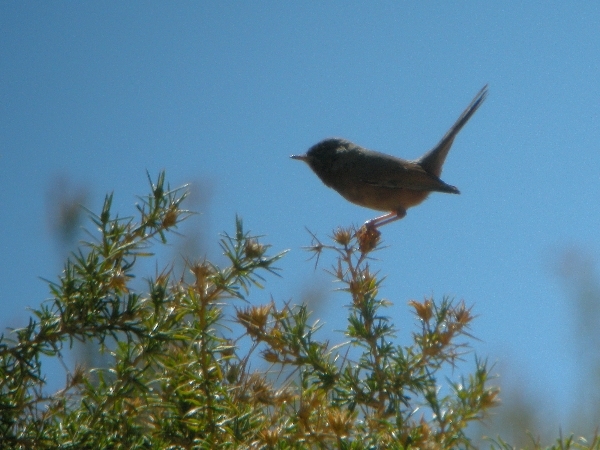 a very poor record shot of the Tristram's Warbler 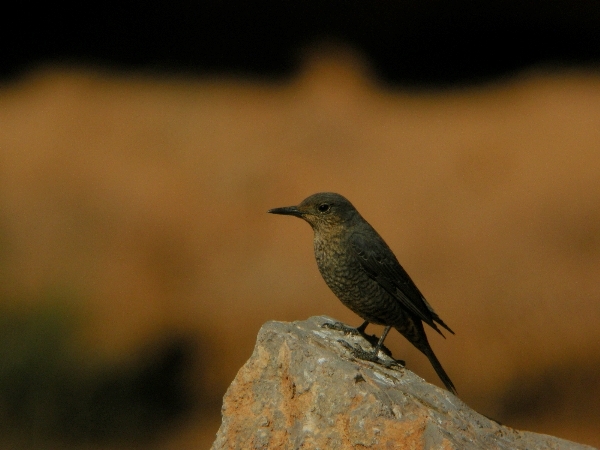 -On the way back down the valley we stopped near the river-side to look for migrant species in the riverside orchards, we had a great time finding, Willow Warblers, both species of Chiffchaff, Iberian & Common, also Tree Pipit, Yellow Wagtail, Common Redstart, Western Olivaceous Warbler and White Storks. 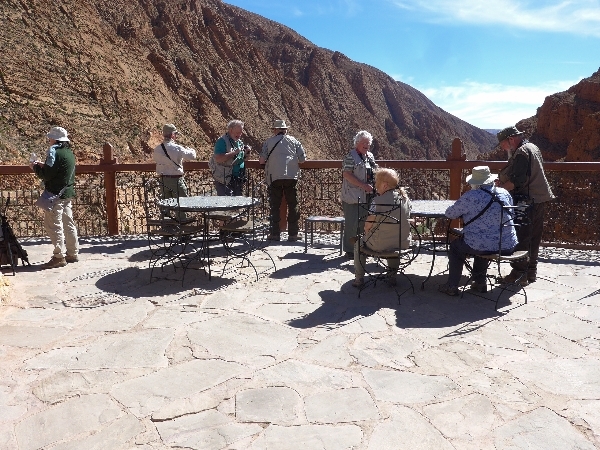 on the terrace at the head of the gorge 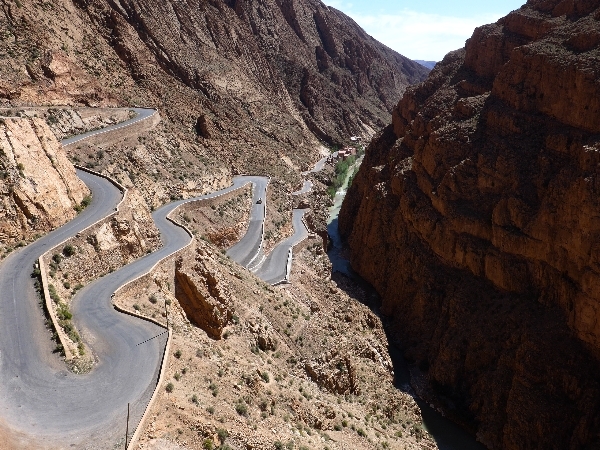 the view from the terrace

Our last stop was a little way from the hotel on the stony-plains, Ahmed dropped us off and we walked back to the hotel. The afternoon sunlight was fading and after a flurry of activity at the start of the walk we saw very little. A Tawny Pipit, White Wagtail, Seebohm’s Wheatear, Trumpeter Finch and Desert Wheatear made up our ‘flurry’ of sightings. Further along the track we all got good views of Desert Lark which is what I was hoping for, this was the last of our birding, it had been a long but very successful day. 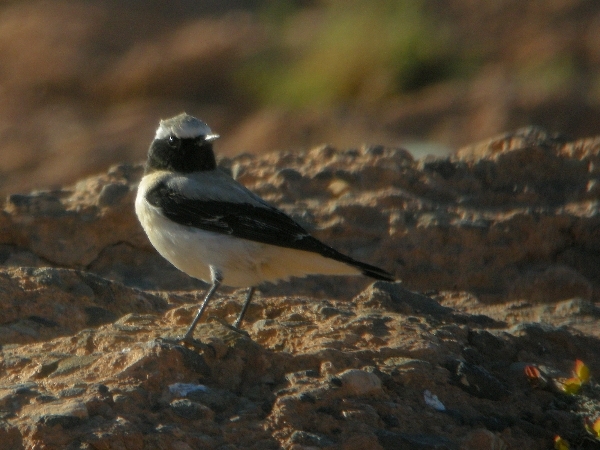 another picture of Seebohm's Wheatear