It was a long day on the road but we broke it up several times by visiting various birding sites, we set off at 7am. Heading south-easterly towards Merzouga. Our first stop was 10 minutes into the journey because we made a second attempt at seeing sandgrouse near the Tagdilt Track.

We dipped on the sandgrouse, in fact not many species were seen at all, Desert and Red-rumped Wheatears, Greater Short-toed Lark and not much else. So we continued our journey for another 30 minutes before we stopped again! 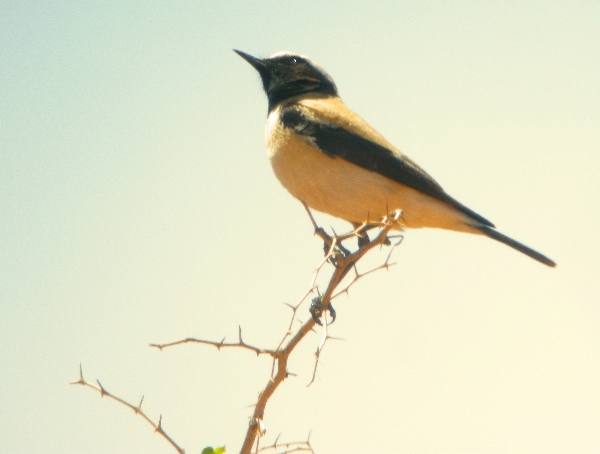 A rock quarry was our next destination, a regular site for Pharaoh Eagle Owl and last year we also found Maghreb Wheatear there. We spent a long time searching a rock face but the owl was not in its usual ‘cave’, or so we thought! There was no sign of the Wheatear either but we saw Eurasian Kestrel on the nest, Black, Northern and Seebohm’s Wheatears, Desert Lark, Black Redstart and a Subalpine Warbler.

We walked deeper into the quarry drawing a blank on the owl and as we headed back to the bus Mike mentioned that he may have seen the owl in the cave as he was looking from a higher vantage point! Amazing, why he didn’t mention this an hour before is incomprehensible!

Well, we all climbed a little higher on the return route and sure enough you could see the PHARAOH EAGLE OWL sitting there, in fact, it had two fluffy chicks with it. We all enjoyed watching them thanks to Mike, bless his cotton socks. 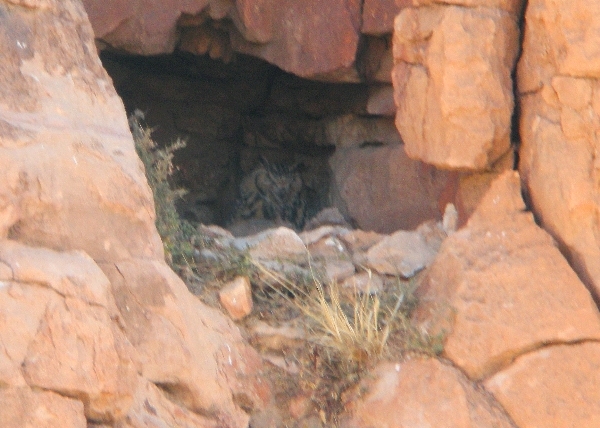 Back in the bus we tried to some miles behind us but we stopped three times for birds of prey sightings, we logged Long-legged Buzzard, Peregrine Falcon, Booted Eagle and we saw a Short-toed Eagle perched on a pylon.

Eventually we arrived at our first scheduled birding walk, it was a wadi just east of Goulmima where we hoped to see a number of species. The wadi spread out in front of us it stretched for many kilometers, consisting of a mosaic of a million clumps of grass, the flat landscape broken only by dense leafless, thorny bushes dotted here and there, a hot, hostile environment that looked lifeless. 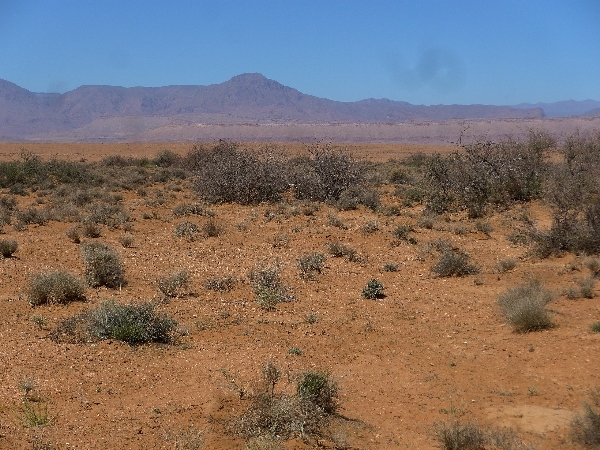 But it wasn’t without life we saw plenty, a dozen or so species of birds, 4 different butterflies, lizards and lots of small wasps and bees were visiting patches of brightly coloured flowers. Our main target bird was the Streaked Scrub Warbler, a wren-like species with a very long tail that often hopped along the sand visiting the grass clumps looking for insects. We found Southern Grey Shrike, (Lanius meridionalis elegans), also Desert Wheatear, Bar-tailed Lark, a flock of Greater Short-toed Larks, a group of eight Fulvous Babblers and a single Spectacled Warbler.

We had walked about a kilometer and it looked as though we were out of luck with the Scrub Warbler but then Patrick found a nice surprise, it was a Tristram’s Warbler, whilst he was watching it he discovered two Scrub Warblers, fantastic! We watched these busy little creatures working their way through the grass clumps for about half an hour, amazingly the Tristram’s Warbler was sticking close to them forming some kind of relationship. 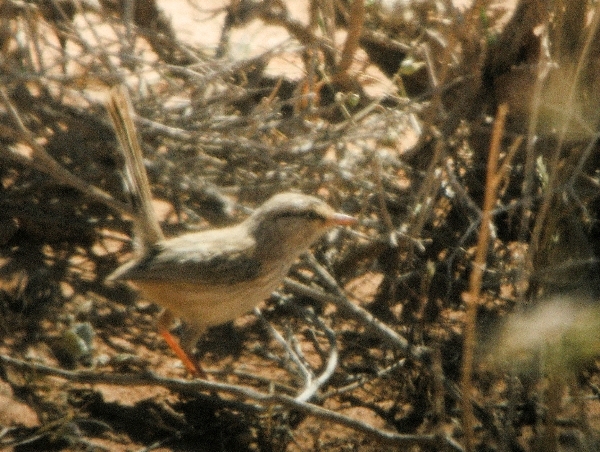 a bad record shot of the Scrub Warbler

We added several more species on the return journey back to the bus, Patrick got to see his sought-after Desert Swallowtail Butterfly, perhaps a just dessert in the desert!  We all watched Eurasian Hoopoe, Common Redstart, Northern Wheatear and a Willow Warbler, it had been a very successful and enjoyable walk.

Next we drove back into Goulmima to pick up picnic supplies we then turned south and headed out of town towards Erfoud. Our picnic stop was at a small river where for the last three years the construction of new bridge has greatly disturbed the environment, the bridge still isn’t finished! Nevertheless it is my favourite place where you can find Blue-cheeked Bee-eaters. 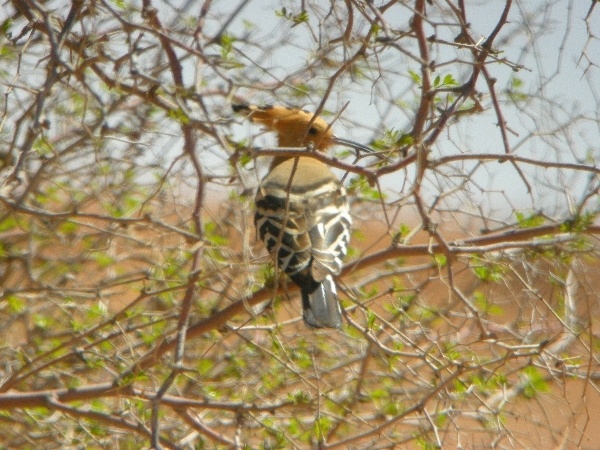 We immediately found a pair of the Moroccan subspecies of White Wagtail but not much else until we set off walking along the river bank. A couple of warblers were seen in some giant pampas grass just before we turned a bend and had views over a large shallow pool, this held Little Egret, Little-ringed Plover, Common Snipe and a Green Sandpiper.

Further exploration produced little more, Subalpine and Bonelli’s Warbler, a Grey Heron and some very distant Ruddy Shelducks. It was whilst we were watching the Shelducks when a flock of five Blue-cheeked Bee-eaters flew over us, they failed to land in their usual line of trees so our views were very brief, a nice sighting but not enough for the group’s satisfaction.

We hit the road in earnest now, making our way down through Erfoud and onto the ‘new’ desert road that is now completely tarmac all the way down to Merzouga. We stopped one last time to walk into another wadi looking for Desert Warbler but it was now late afternoon and we saw very little.

The huge Erg Chebbi sand dunes sat on the horizon ahead of us like a creased, golden blanket, they became more imposing as we drew near stretching for many kilometers and rising many meters above us. Our Kasbah for the next three nights sits at the base of the dunes and the main terrace affords extensive views of this extraordinary natural phenomena, we are going to like it here! 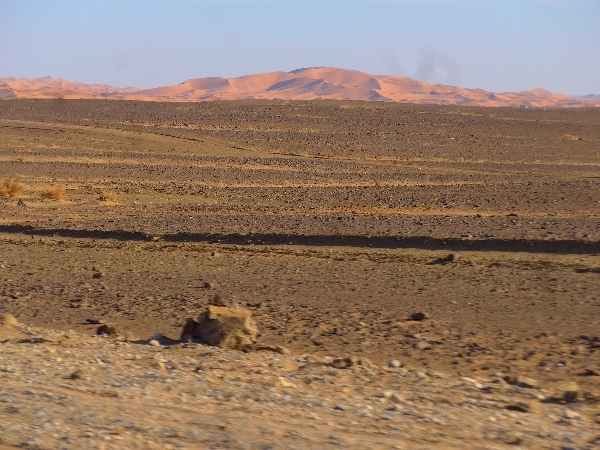 Having arrived at 5pm we had plenty of time to relax and to discover our new surroundings before we sat down to dinner at 7:30pm. A delicious four-course meal went down very well, thank you! A little disconcerting was the increase in the wind, noticeable as we made our way to bed, I hope we are not in for a sand-storm tomorrow.