Fortunately, the strong wind that developed last evening had relented by 6am this morning, it was cold with a light wind. We met on the hotel terrace ready to explore the tamarisk scrub right next to the terrace where a natural basin usually holds water into March but for the last 4 years I haven’t even seen it damp!

So we walked all over the area peering into the tamarisk where we found numerous Subalpine and Bonelli’s Warblers, also Common Chiffchaff, Woodchat Shrike and White-crowned Wheatear. Dozens of Collared Doves were joined by a single Laughing Dove and a couple of Brown-necked Ravens flew over. 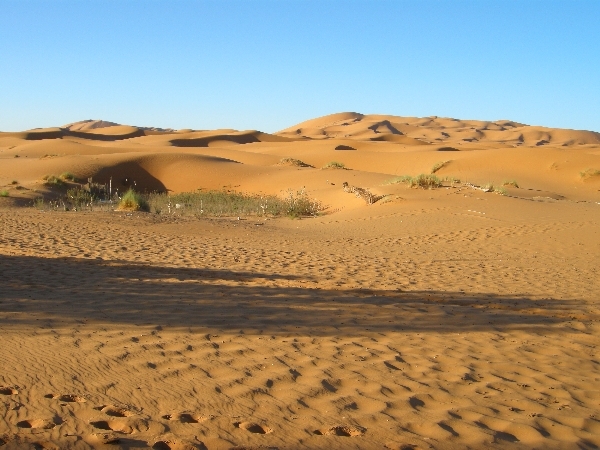 Part of Erg Chebbi dunes viewed from the terrace

We did find a small man-made pool where we inadvertently flushed two Marbled Ducks, we nearly cost one of them its life. Just as they circled around the area a Peregrine Falcon appeared and went chasing after them, luckily, they both escaped but it was a near miss, after that excitement we went in for breakfast.

At 8am we boarded our 4*4 vehicles and drove off to search the area for a number of species missing from our list. We made several stops in wadis where we discovered Hoopoe Lark, Bar-tailed Lark, Northern, Black-eared, White-crowned and Desert Wheatears. A Lanner Falcon hunted low over the stony plains whilst one or two Booted Eagles circled on the thermals. 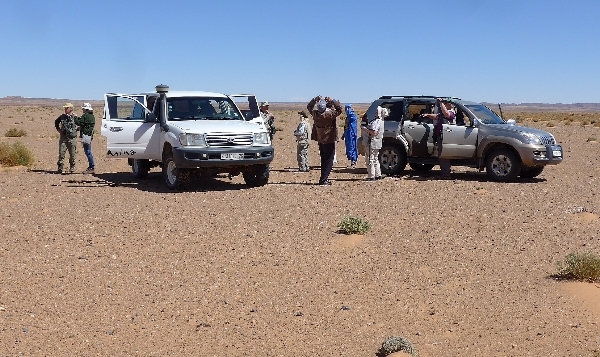 Eventually we arrived at a Berber village consisting of just a few buildings and several tents, they also had goat and chicken ‘pens’ with rooves made from layers of dead branches. It was in and around these branches that a small colony of DESERT SPARROWS was nesting. We enjoyed prolonged views of several pairs of these very pale birds, we even saw a couple or very dark grey individuals which were obviously hybrids, a mix of House x Desert Sparrow, something I had never come across before. 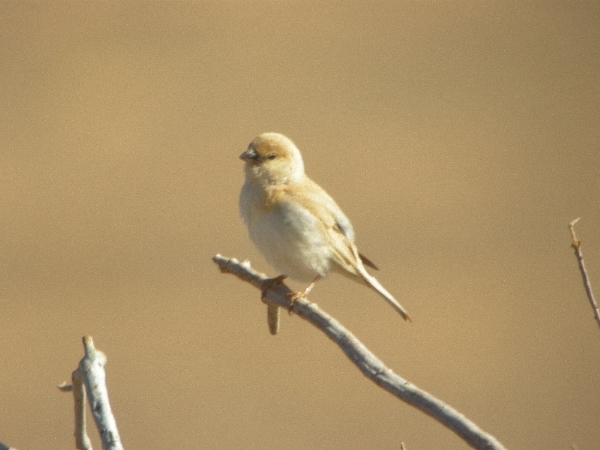 After that excitement we set off in search of Sandgrouse and in the process of doing so we discovered our first Desert Warbler and had sightings of a few more Hoopoe Larks. As for the sandgrouse, well, we will have to wait until tomorrow because the only sniff we had of them was a very distant flock of five which only the drivers saw, some of the group did hear them and from the call we identified them as Crowned Sandgrouse.

We had a long lunch spending two hour back at the kasbah, some of us walked around the tamarisk bushes finding similar species as this morning with exception of Western Olivaceous and Sardinian Warblers. Lunch was taken on the terrace in warm sunshine, how nice!

For the afternoon we visited the cultivated areas around the town of Rissani some 40km away, we had a very pleasant time walking along a fairly quiet road. We found several pairs of Maghreb Lark (formerly Long-billed Crested Lark) they showed extremely well. Another two flocks of Fulvous Babbler were also nice to see but the pick of the bunch had to be Blue-cheeked Bee-eater, they looked stunning in the afternoon sunlight as they perched on power lines. 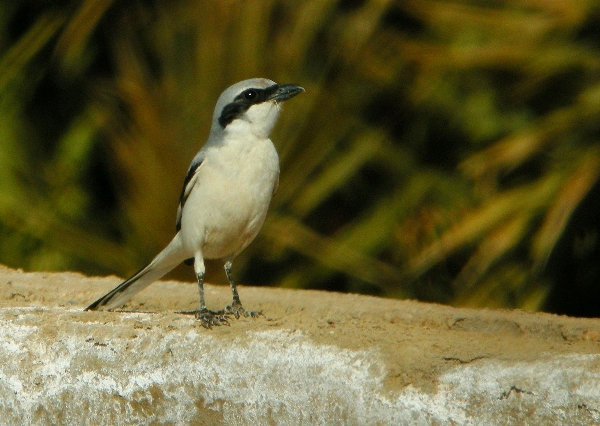 A little further north of Rissani a wide dry riverbed (wadi) is lined with mature tamarisk trees and this is where we searched for the recently ‘split’ Saharan (Olivaceous) Warbler, it is a resident breeding species. The dense foliage of the trees made it difficult to see any birds and none of them were calling or singing. We found numerous Bonelli’s and Subalpine Warblers but not the Saharan Warbler.

A couple of Booted Eagles drifted over and mixed flocks of both Common and Pallid Swifts were noted high up, it was a Booted Eagle that provided some ‘raptor’ entertainment when one of them dashed down to the ground and landed on top of a Feral Pigeon. It squeezed the life out of the pigeon and then began eating it, gruesome!

Our last sighting at this site was of a pair of Laughing Doves, noted as we boarded the bus. During the journey ‘home’ we had excellent views of Little Owl, this North African subspecies has a nice rusty-brown plumage and is not grey-coloured like the UK version. 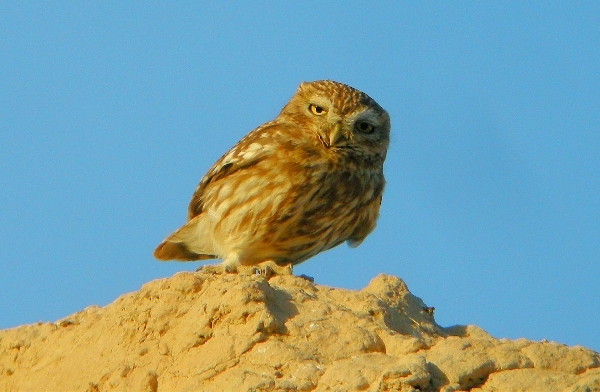 Dinner was a little late, we ate at 8pm, not our fault, it was served late. However, it was well appreciated when it arrived.