TRANSFER FROM MARRAKECH TO OURIKA VALLEY

The group arrived in Marrakech during the last couple of days prior to the start of the trip, we all met up at a hotel near the airport this morning at 9am to set off on our much anticipated 11 day tour. We all saw House Bunting from our various hotels during the last day or two, in our dining room we had a male singing to us during breakfast.

Whilst standing outside the hotel waiting for our bus to arrive we noted a number of other species, Common Bubul, Common Kestrel, Wood Pigeon, Collared Dove, Feral Pigeon, House Sparrow, Great Tit, Black Kite, Common Swift, Little Swift and during a stop at a bank, we had great views of Pallid Swifts flying low around the buildings.

In our 16 seater minibus we had a very comfortable ride to the Ourika Valley, but the weather was dull and overcast and rain drizzled down for most of the trip. Along the way we added White Stork, Great Grey Shrike, Magreb Magpie, Spotless Starling and a couple more Common Kestrels. We made one stop to buy lunch supplies before stopping in the valley to make our first birding excursion of the trip. Our main target species was the Levaillant’s Woodpecker, but we hoped to see many other species too.

We walked along a very wet and muddy track down to the Ourika River, some of us were not suitably prepared in the footwear department and ended up with wet socks. But, we all said it was worth it. We noted African Chaffinch, Greenfinch, Great Tit, Robin, Wren (H), Blackbird, many Common Bulbuls and a few Cattle Egrets as we progressed to the river.

Once we stood on the shingle bank we had a much more open area to scan, we found Moroccan Wagtail, Grey Wagtail and Yellow Wagtail (iberiae) in quick succession, a bunch of hirundines included Barn Swallow, Red-rumped Swallow and House Martin flew over the river. We found Serins and Siskins, Cetti’s Warbler, Chiffchaff sp. more Robins and we heard another Wren.

We were disappointed not to even hear a Woodpecker never mind see one! But our return journey produced great sightings of Hawfinch which pleased most of the group and made up for the dip on the pecker.

Or the next couple of hours we drove higher and higher into the Atlas Mountains heading for the ski resort of Oukaimedan and because it was a Sunday the road was very busy with ‘local’ tourism from Marrakech. We broke through the cloud base and found ourselves in wonderful sunshine, a clear blue sky and alight breeze, how wonderful was that? Our first sunshine stop produced a couple of nice additions to the list in the form of Moussier’s Redstart and Blue Rock Thrush. 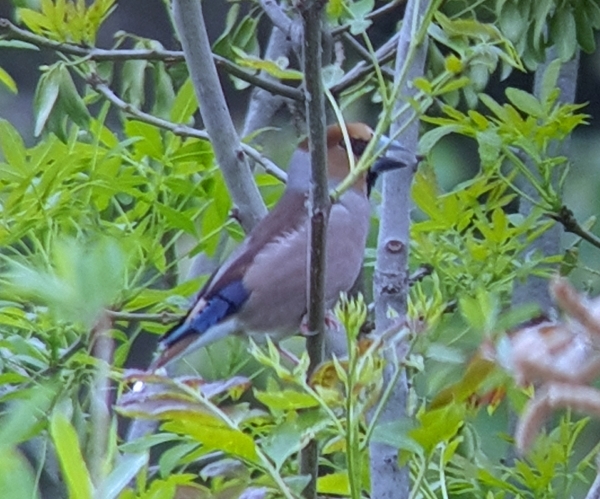 record shot of the male Hawfinch

We stopped in an area of pine trees and immediately found a couple of Firecrests, also Coal Tit and more African Chaffinches. Then a couple Yellow-billed Chough came over, quickly followed by 6 Red-billed Chough, we went on to see a huge mixed flock of Choughs, maybe 50-70 birds.

Another stop very near to Oukaimedan produced Black Redstart and Black Wheatear, both were above a stream we were searching for a Dipper sighting. Four Eurasian Coot fed on the lake at Oukaimedan and we could see that not too much snow was laying on the mountainside, this didn’t bode well!

We were shocked by the number of people at the ski resort it was crammed full of people, thousands of them!! It was very hard to find a patch of ground free of people. Over the next couple of hours we drove up side tracks and search for new species, we added Rock Sparrow, Black-eared Wheatear, lots more Black Redstarts, we heard Atlas Horned Lark but we could not locate it and the number of choughs was mind blowing. 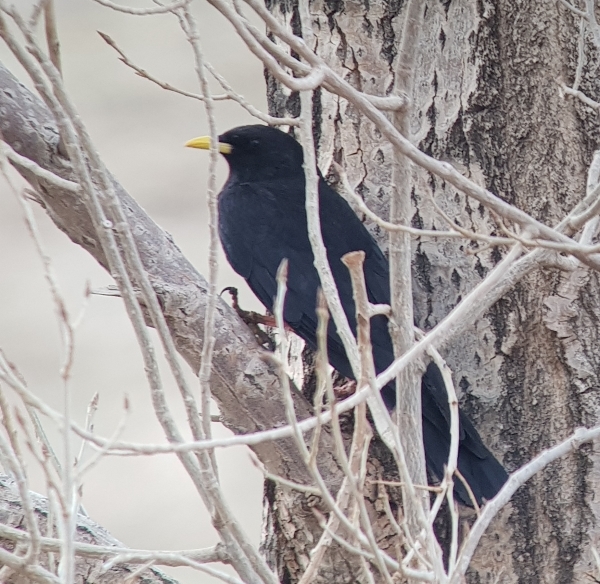 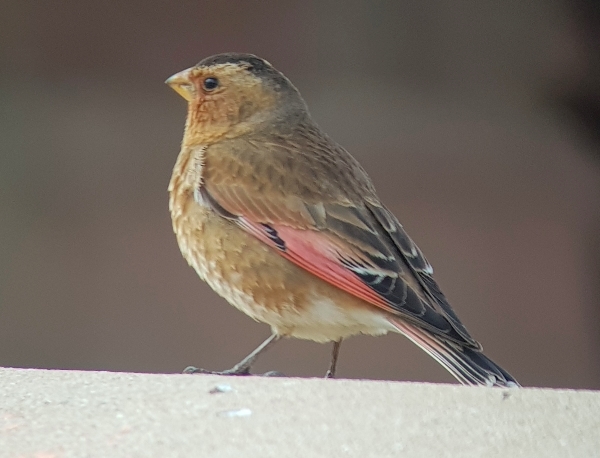 one of the 50+ African Crimson-winged Finches

In the meantime a couple of us had views of a Brambling, we also found a Yellow-billed Chough sitting in a nearby tree, another Mistle Thrush was found also a Water Pipit in summer plumage and more Chaffinches.

A swirling mass of Choughs was spotted high up in the blue sky, they were tightly knit in ball which suggested that a raptor was about. Sure enough, a Falcon was diving into the mass of black birds, they dropped down towards us and so did the falcon, we soon identified it as a Barbary Falcon, it swooped quite low near to us before zooming off without a catch.

It was now getting quite chilly and decided to spend a little more time looking for the Atlas Horned Lark before the sun went behind the mountains. We searched the open ground where far fewer people were now, we added Common Raven to the list, but we never saw a Lark.

The journey down was uneventful we past through thick cloud before we arrived at our hotel at 7:30pm. It had been a long, but that is nature of this trip, everyone enjoyed, they had put in a good shift with some great results.

From the hotel terrace we heard Levaillant’s Woodpecker calling, an omen perhaps for tomorrow’s birding!