WEATHER; scattered cloud with lots of sunshine and a lovely breeze. Temp. 20C+

It was a fabulous day today, very long, but a great birding day. We saw 100 species and added quite a few to the trip list.

After an early 6am breakfast we were all loaded onto the bus at 7:15 for the hour-long journey down to Sous Massa. Whilst waiting to board the bus I noticed a Barn Owl flying around the side of the hotel building, it headed to the partially built hotel just behind our hotel and I assumed it went in there. We also noticed dozens of Swifts gathering above us and a couple of Willow/Chiffs in the garden of the hotel opposite ours.

Our journey down the main road south was uneventful, we saw many locally common species including: Magreb Magpie, Spotless Starling, Common and Pallid Swifts, White Storks, Common Kestrels, European Bee-eaters and a couple of Marsh Harriers.

It was a beautiful morning and bird song filled the air as we disembarked near the entrance to the National Park.  Our first walk was along the elevated track which runs parallel to the river but high above it. Within five minutes we had heard and saw Common Bulbul, Collared Dove, European Bee-eaters, Moussier’s Redstart, Sardinian Warbler, Serin, Greenfinch and we heard Cetti’s Warbler. 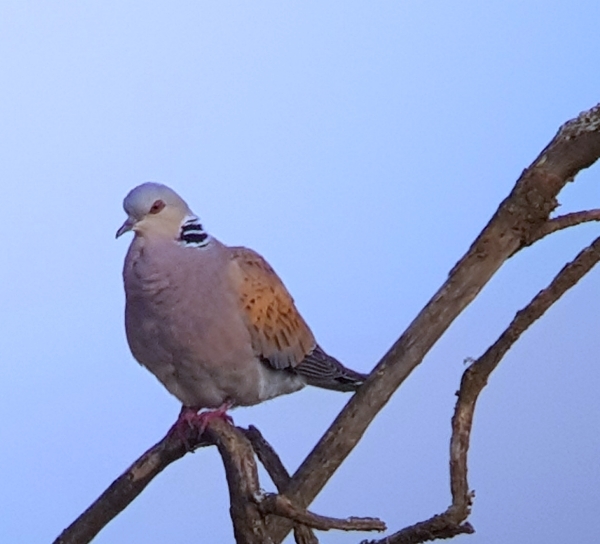 The track led us down a ramp to an area of small cultivated fields where we were by a cacophony of bird song and calls. Zitting Cisticolas were everywhere along with Moussier’s Redstarts, Bulbuls, Stonechats, larks and warblers. We saw a Western Olivacecous Warbler singing which was new for the trip and several Black-crowned Tchagras. At this point we got back onto the bus and drove a kilometer or so the National Park entrance.

He track gave us excellent views of the river and this first section produced sighting of Little Grebe, Grey Heron, Ruddy Shelduck, Continental Cormorant, Mallard and Eurasian Teal. Four flocks of Glossy Ibis flew down river and higher up we saw another large flock of Black Kites migration northward. 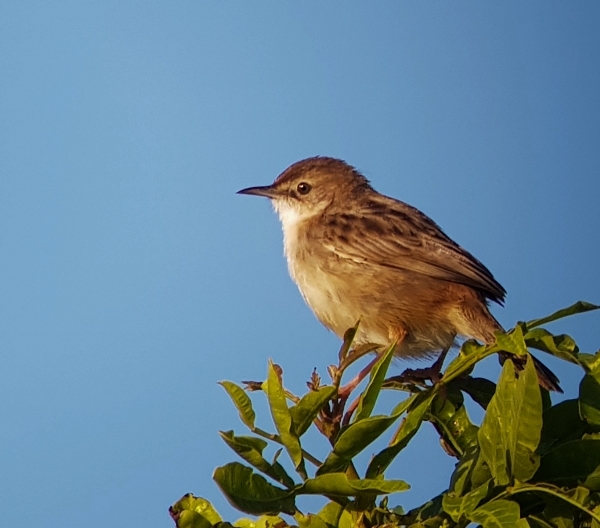 we saw a lot of this Zitting Cisticola

Linnets, Greenfinches, Serins, Sardinian Warblers and the odd Willow Warbler fill the air with calls and songs as we progressed along the track toward the beach area. Flocks of European Bee-eaters appeared below us in the tamarisk scrub, as did Woodchat Shrikes and more birds fed along the banks of the river.

Ruddy Shelduck numbers were high and they were joined by Common Shelduck, Northern Shoveler, Gadwall, Greater Flamingo, Black-winged Stilt and Continental Cormorants  (sinensis). An Osprey flew up river and later we found a second one perched on a fence post. 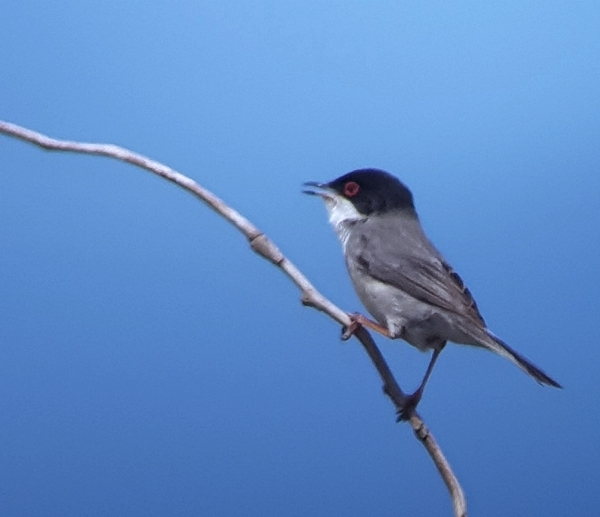 Near the beach we saw a small flock of BALD IBIS fly over, that was our most wanted bird of the trip in the bag!! Audouin’s Gull was another ‘must see’ species despite three of group seeing one yesterday most of us had not. A walk down to the beach produced, once again, a sighting of a single individual and once again only a couple of the group saw it. 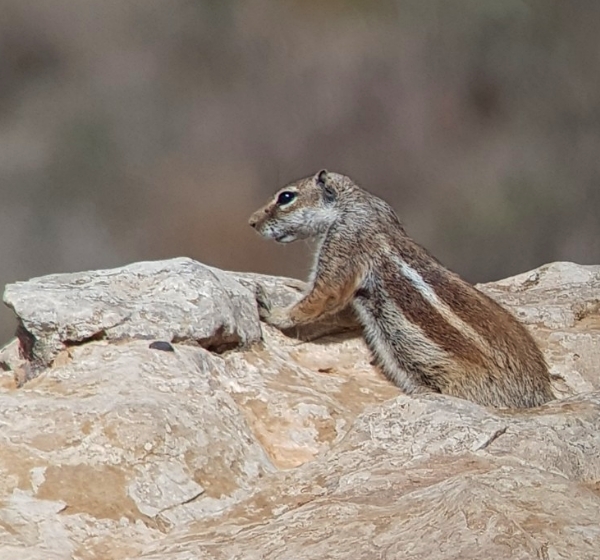 A much closer BALD IBIS flew over us, we got much better views of it. Flock of Gull Billed & Sandwich Terns flew along the coast and a single Caspian Tern flew up and down the river.

Our walk back produced more of the same species it had been a very enjoyable few hours with lots of species added to our list. One of the wardens of the reserves offered to take us to the feeding area of the BALD IBIS for a small fee, so we agreed.

We drove a short distance to the south side of the river where a large open expanse of desert scrub grew on sandy soil. At first we only found four Bald Ibis and they were a little too distant, but a little later we were treated to a spectacular aerial display of a flock of 40+ birds. We followed them in our binoculars and they eventually landed back along the road. We followed in the bus and ended up with excellent close views of them feeding just beyond a fence. 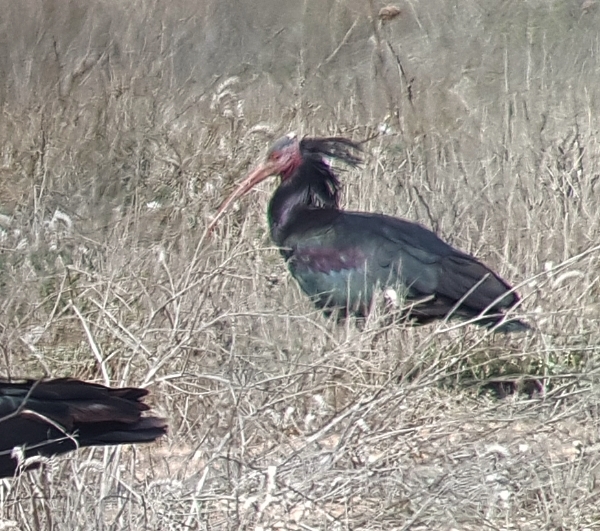 Other birds seen on the ‘Ibis’ excursion was Little Owl, Great Grey & Woodchat Shrikes and we heard Short-toed Lark.

In the meantime two of the group, Alan & Dale had decided to stay near a bridge of the river, they reported sightings of Turtle Dove, Common Kingfisher and Black-winged Kite….ouch!!!

We drove into town for lunch and returned to the bridge soon after, it wasn’t long before we found two Common Kingfishers, we also saw PLAIN MARTIN, another biggy for the trip list. Yellow Wagtails flitted about beneath the bridge and we found Eurasian Coot, Common Moorhen and a lot more European Be-eaters. 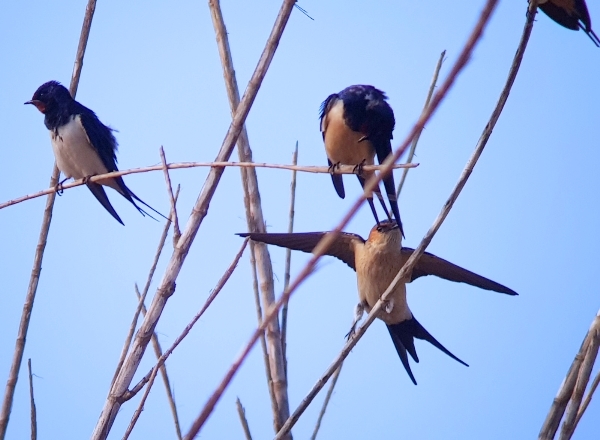 For the next couple of hours we walked the tracks that ran parallel to thew river and as the afternoon progressed the light became superb. Bird song rang out from all directions, the whole area was magical it was a lovely experience. We added Tree Pipit, Turtle Dove, Laughing Dove, Tawny Pipit, Subalpine Warbler, Red-rumped Swallow and Sand Martin to the list but we could not find Black-winged Kite or Great Spotted Cuckoo. 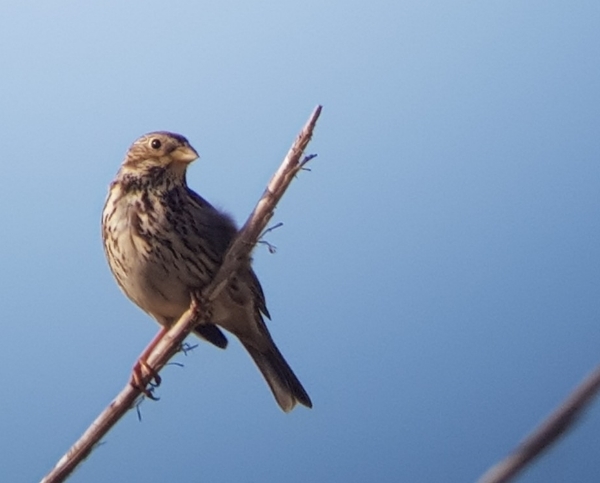 my favourite bird I love to hate - Corn Bunting

We finished our walk around 6:30pm and drove back to Agadir reaching Oued Sous around 8pm where we spent 30 minutes looking and listening for Red-necked Nightjar. A few of the group heard a distant call and we saw one in torch light flying over us, but it was a brief sighting. Bats were also seen and we heard the call of Stone Curlews coming from the nearby marsh scrub.

Because of the late time we drove into Agadir to a Moroccan roadside restaurant and ate our dinner at 9pm! It was nice to sit outside and eat, we had 18C. We hit the ‘sack’ just after 10pm, what a long day!!!