WEATHER: cloudy at first with cloudy,sunshine after 10am.

After a good night’s sleep we were all up for breakfast at 7am And an hour later we were on the terrace looking for new species for the list. We had low cloud and dull conditions but it was dry.

The local flock of Common Bulbuls were making a lot of noise in the ivy, we saw a female Blackcap, a Robin and a flock of Cattle Egrets. We then heard the call we were hoping for, the Levaillant's Woodpecker, it wasn't far away and it called persistently bur we could not locate it from where we were. So we walked to the bird instead of waiting for it to come to us.

About 100 meters along the road we found the bird, fantastic. It sat perched above us and stayed in place for 15 minutes, in the meantime we added  African  Blue Tit, Serin, Siskin, African  Chaffinch, Grey Wagtail and a couple  more Blackcaps to our sightings tally. 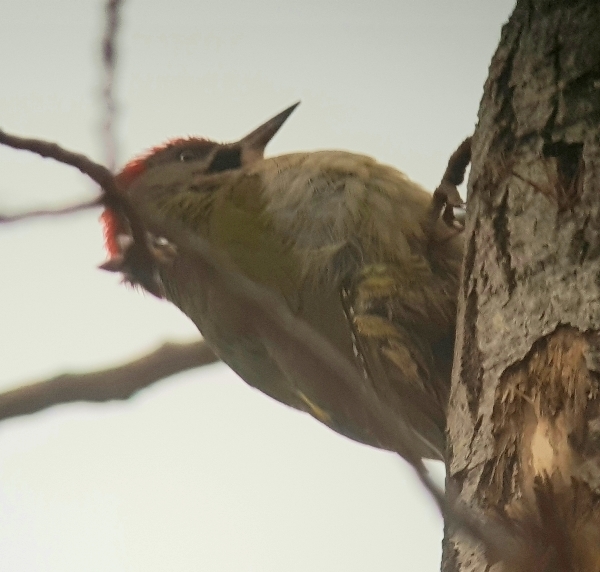 Then a Great Spotted Woodpecker flew into the same tree as the Levaillant’s and started drumming! That was amazing,two  species of Woodpecker in one tree, one calling and one drumming.

We then packed up the minibus and set off for our all-day transfer to Boumalne Dades some 400km away. Several planned stops were on our schedule which had to be changed because of a mishap with one of our suite-cases, in fact it had been left behind in Marrakech. Our driver dropped us off at our first birding site and then went back to Marrakech to retrieve the lost luggage.

For the next 80 minutes we walked along a road-side ridge which gave us panoramic views across scrubland, cultivated fields, forests of olives and flat plain wasteland. We had a terrific time finding lots of new species, this started with one of main target birds the Barbary Partridge. Within minutes we found a dozen or so and more followed, we picked out our first Sardinian Warblers, Magreb Magpies, Thekla Larks, Common Stonechats, Linnets, we saw a Common Whitethroat performing its display flight as well as Corn Buntings and a female Moussier’s Redstart. 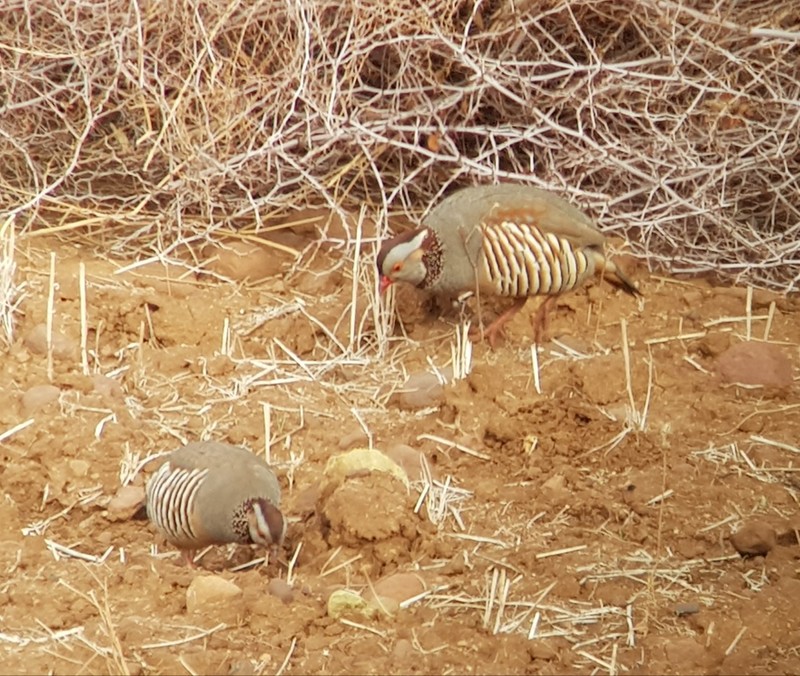 Our search for Great Spotted Cuckoo went unrewarded even though we put in extra time to look for one. Our minibus turned up on time and clambered aboard. We had only travel for a few minutes when we stopped to look at a Woodchat Shrike, everyone scrambled off the bus and a min-dispersal occurred. It took 20 minutes to get everyone back on board in the meantime, Corn Bunting, Moussier’s Redstart (male), more Sardinian Warblers and a Common Buzzard went on list.

The next stop was for toilets at Ait Ourir, there we saw White Storks, our first Booted Eagle, Black kites and Little Swifts. A few kilometers further on we stopped to look at a ridge near a Royal Reserve (hunting ground) at the gates to the reserve we could hear Common Crossbills calling from the pines but we failed to see them.

Not far up the road we stopped once again to get a better  view of the ridge and this time we struck gold with a pair of Bonelli’s Eagles circling over us, they eventually dropped down onto the top of the ridge not before another large raptor appeared. This one was a Goshawk, we had great views of it and this bird also circled above us and headed over to the ridge.

A couple of Coal Tits flitted about in the pines above us and another Booted Eagle drifted down the valley before we left. We had excellent weather from then on, the sky cleared and yhe sun shone for the rest of the day.

We stopped for lunch around 1pm and from the terrace we had great views of a valley below us. Yet another Bonelli’s Eagle circled above us, we also saw Common Kestrel, Eurasian Sparrowhawk and both Blue and Great Tits in the bushes below us.

It was also 3pm and we hadn’t even driven through Tiz-n-tickla Pass yet!! We had along way to go and only a few hours of daylight left. We made just very short stops from then on, our main sightings from the bus were off Wheatears, we saw many White-crowned, a single Black Wheatear and not much else to write about.

We had a great morning but the afternoon and evening was spent travelling, we arrived at our next hotel at 8pm instead of the usual 6pm.

We ate a lovely Chicken Tajine and went to bed, at least for next two days we will spend much less time in the bus.