We had a marvellous day today with Larks galore and wheatears coming out of our ears! After a 7am breakfast we set off on foot, walking towards the Tagdilt Track some 3km away. We noted House Bunting at breakfast and White-crowned Wheatears around the hotel buildings.

Once out on the stony plain outside the hotel we started hearing larks calling and singing. The most common species was the Thekla Lark but a couple of the group found a Skylark and we had a brief encounter with Greater Short-toed Lark. We then found a pair of Desert Larks before bumping into a pair of Desert Wheatears!

As we walked to a dumping area for building material and earthworks we found a few more Wheatears; Northern Wheatear came first, it was a nice colourful male (perhaps a Greenland race?) this was quickly chased away by a pair of White-crowned Wheatears. Next a pair of Red-rumped Wheaters came into view, both showing very well.

That first hour was very productive with most of the group getting a lifer or two. We jumped onto our minibus, which had followed us, and headed to the Tagdilt track which was a kilometer or so away.

The wind was still biting and cold but it seamed to be settling down and the sun began to break through the high clouds. E most productive part of the track is the area around the rubbish tip, it is amazing how birds are attracted to this unsightly and smally place.

Temminck’s Lark came next we saw a pair of them, they gave very close views, we had fly over Yellow Wagtails, more Thekla Larks and a variety of Wheatears, species we had already seen. Our most coveted sighting was that of the Thick-billed Lark, we found a pair of them and we got fairly close. What a stunning bird, great views and a lifer for all of the group. 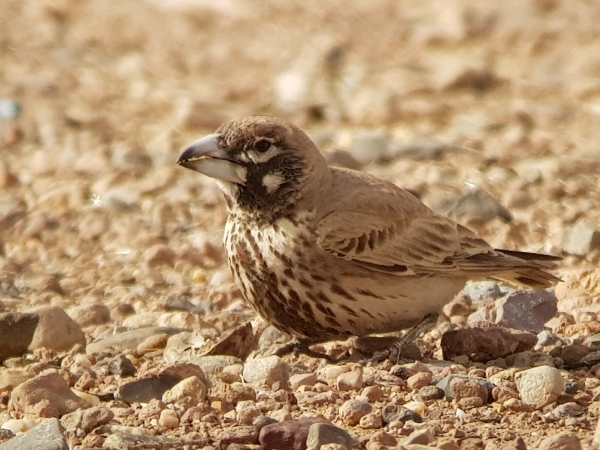 Not much else was seen so we got back on to the bus drove much further along the track away from the rubbish. We made many short stops and found Common Kestrel and another most-wanted target bird, the Cream-coloured Courser, what a fabulous treat they were. A pair gave us great views and even performed their ‘bowing’ courtship display. A pair of Crested larks were also found nearby.

Could it get much better than that? Yes I think so as our next bird was the Hoopoe Lark, this bird was also performing its courtship display which included a kamikaze downward flight. 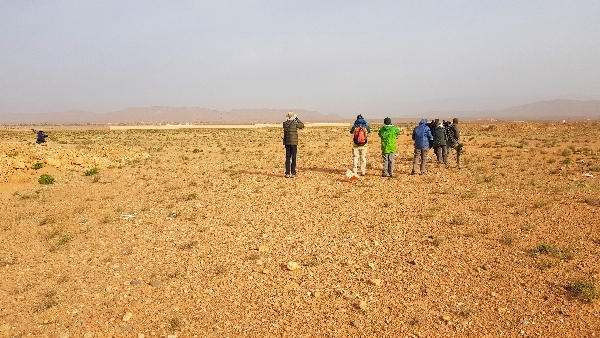 At an old ruin of a building we scanned an area of semi-arable land and found a good number of Greater Short-toed Larks, with more Wheatears, wagtails and a single Tawny Pipit. We picked out a Black-eared Wheatear as well as the regulars.

Following that sighting we set off towards the main road but we didn’t get far because a very large raptor appeared low down in the sky. The huge bird started to circle, gaining height as it got nearer to us, it was a GOLDEN EAGLE!!! Unbelievable, a truly unexpected, but most welcomed sighting. 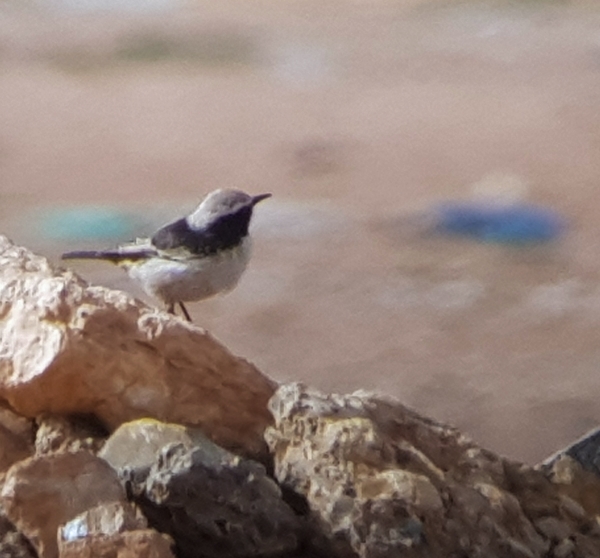 We stopped to watch another pair of Hoopoe Larks and found another two pairs of Temminck’s Lark and more of both Desert and Red-rumped Wheatears before we made it to the road.

Our next port of call was a small farmed area where water channels irrigated small fields of alfalfa and olive groves. We were hoping for a bunch of migrant species but found very few. Willow Warbler, Common Chiffchaff, Common Redstart and Common Cuckoo was all the migrants that we found.

Local species included the brightest Greenfinch you will ever see, also Serins, Blackbirds, House Sparrows, House Bunting and not much else. 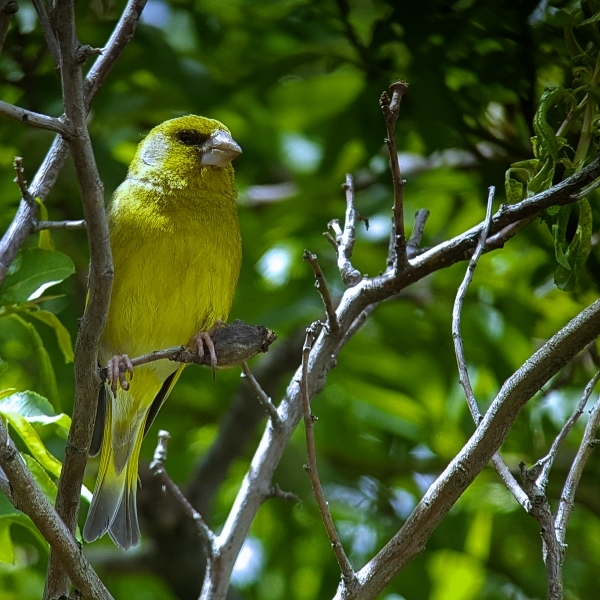 We then drove into town to buy our picnic supplies before driving to the river to eat it. During lunch we noted a few species in the wooded area near the river, Common Chiffchaff, Willow Warbler, Nightingale (heard) Cetti’s Warbler (heard), our first Subalpine Warbler of the trip, also our first Goldfinches as well as Serins, they were singing and displaying. African Blue Tit, African Chaffinch and Blackbird also went on the list.

Our drive up to the head of the gorge was punctuated with short stops to look at the scenery and a couple of birds, we noted Blue Rock Thrush, Laughing Dove, White Stork and House Buntings.

Our main target the Tristram’s Warbler was seen after about 15 minutes of looking, this little beauty showed extremely well. During our walk at the top of the gorge we also noted Rock Bunting, House Bunting, Crag Martin, House Martin, Common Kestrel and many Rock Doves (Feral Pigeons). After a coffee at the head of the gorge café we set off back. 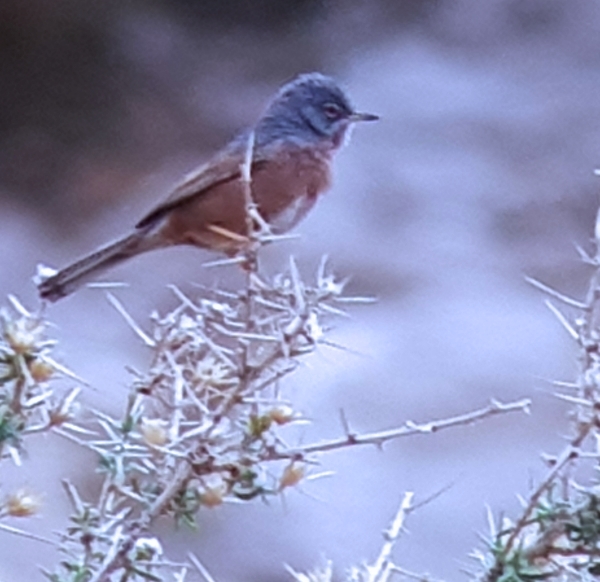 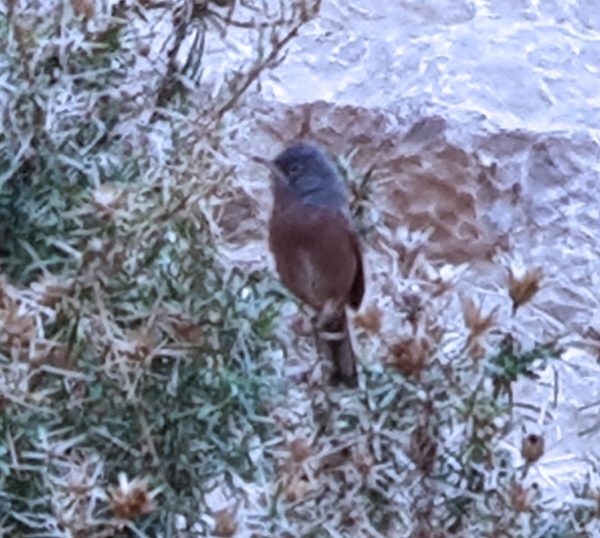 Our return journey was just as good as the trip up the gorge we stopped several times, the first stop was when a Hoopoe flew from the roadside. We got out to watch this stunning bird and in the meantime we found Chiffchaff sp, Greenfinch and then a Nightingale burst into song, we tracked it down and had excellent views of it. Great Spotted Woodpecker went onto the list next, this Moroccan subspecies has a band of reddish-pink across its chest, a very colourful bird. 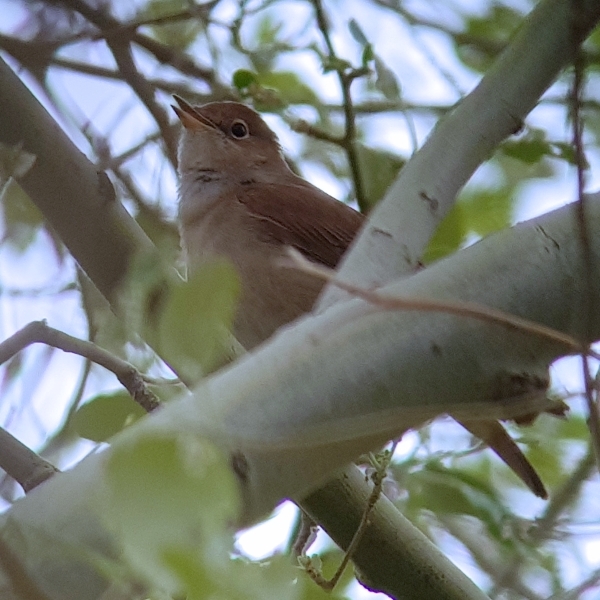 Our very last stop was to watch a group of European Bee-eaters, they were perching on the roadside wires and flew up when we got out of the bus, there was fifteen of them, a great bird to end the day with.