With Common Redstart and House Buntings joining us for breakfast at 7am the day started off well. We also noted two Eurasian Hoopoes and a Woodchat Shrike in the garden with a small passage of House Martins and Swifts overhead. We said goodbye to our wonderful host Ishmal and set for the  ‘desert’ section of the trip, we had a couple of hundred kilometers to travel but we intended to spend most of the day stopping at various locations. 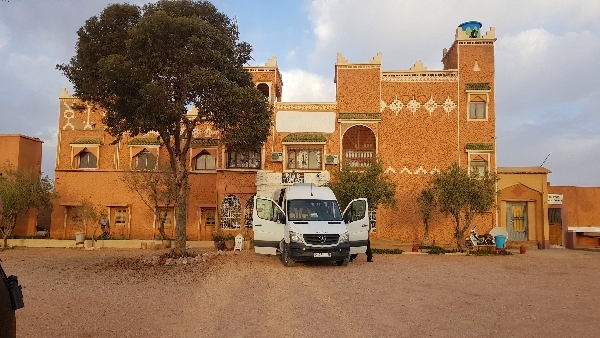 Our first stop was just 10km from the hotel on the road to Tagdilt, along the way we saw Common Kestrel and a Lanner Falcon dashed across the road in front of us. A seasonal pool at the side of the road usually attracts Sandgrouse for a morning drink. Most years this pool has dried up by the time we visit but this year there was still some small pools in sight.

We stood by the bus and scanned the area picking out a number of species, Little Ringed Plover was new for the list, we also saw Desert, Northern & Red-rumped Wheatears, Temminck’s Lark, Greater Short-toed Lark, desert Lark and then we located a single Crowned Sandgrouse! 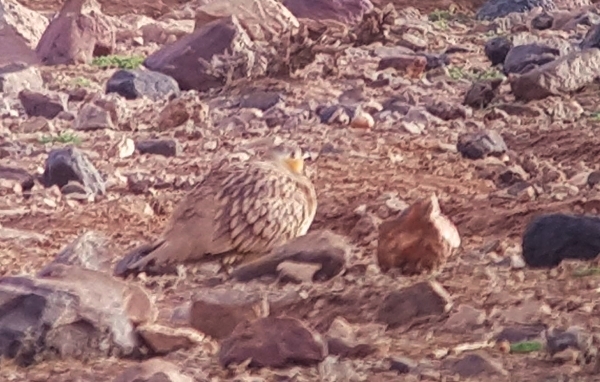 We were not expecting that species in this location and we assumed the bird was ill or injured as it did not move much. However, it did fly off and joined a group of seven more Crowned Sandgrouse and promptly landed back at the pools. Over the next 20 minutes several groups arrived but unfortunately they were all Crowned Sandgrouse.

We left the area reasonably happy with our sightings so far, we drove for about 20 minutes and turned off the main road onto a track that led us to a small gorge where in previous years we have found Pharoah Eagle Owl, so that was our next target bird.

During the walk down into the gorge we discovered a Lanner Falcon’s nest which was occupied by a parent, obviously incubating eggs, that was nice to see. We found Trumpeter Finch, White-crowned Wheatear, Northern Wheatear and House Sparrows. Then we discovered the Owl, sitting in small cave where we had seen it in years gone by. What a magnificent bird it is too, superb markings and so big! 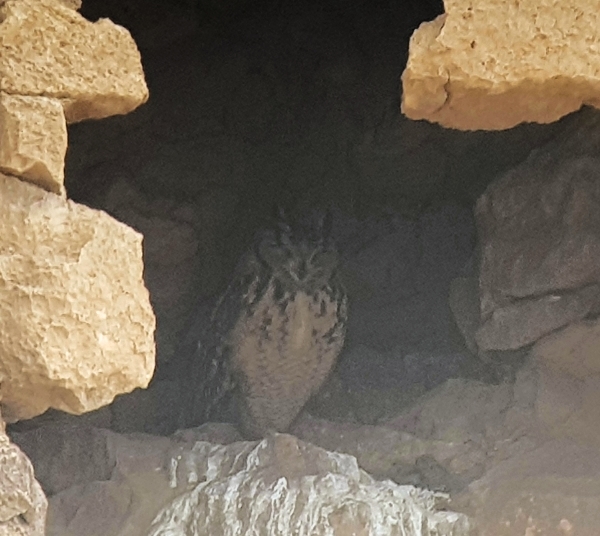 We clambered back up to the bus noting more Trumpeter Finches and a female Desert Wheatear, with a good job well done we set off once more in our south-easterly direction.

Along the route we noted a single Black Kite, lots of White-crowned Wheatears, Swallows and House Martins. At Goulmimi we stopped for lunch and then drove a little further to a spot where we looked for Streaked Scrub Warbler. I have seen the bird many times in this location but today we had a very strong wind which did not help at all.

We walked about 3km along the wadi, many birds were seen, most of them briefly because as soon as they took flight the wind carried them far away from us. We did get to see: Bonelli’s Warbler, Western Subalpine Warbler, Tristram’s Warbler (seen by a couple of the group), Great Grey Shrike (elegans), Woodchat Shrike, a couple of groups of Fulvous Babblers, Crested Lark, Bar-tailed and Desert larks, Desert Wheatear and a Hoopoe. However, we did not find a Scrub Warbler. 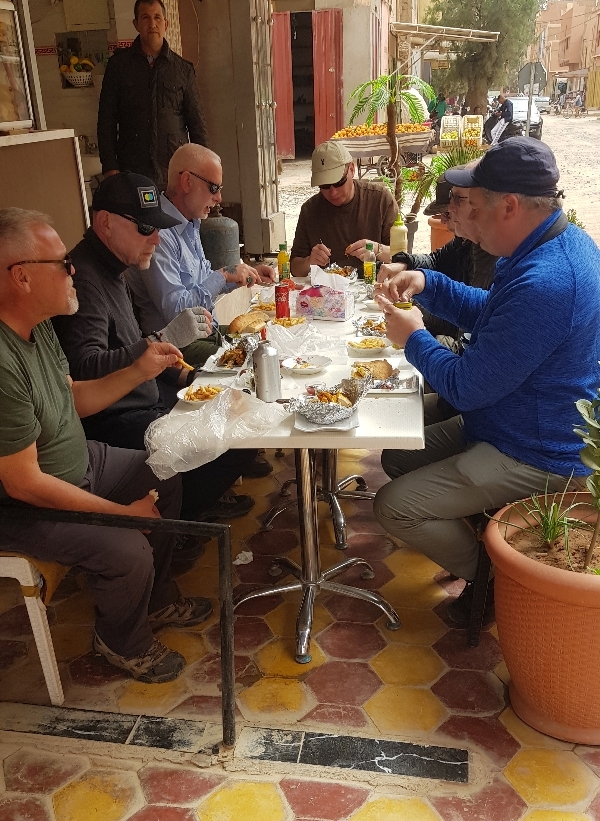 It was a really tough walk back to the bus, the strong wind was in our faces, we were sand blasted at times, quite an unpleasant time. Once on the bus we drove for an hour and stopped at a regular site at the Oued Gheris. Once again we were thwarted by the wind and we stayed for a little while, we added Ruddy Shelduck to our list and we noted Moroccan Wagtail.

For the next two hours we stayed on the bus all the way to Café Yasmina adjacent to the Erg Chebbi sand dune system. We had seen Booted Eagle, Marsh Harrier and a couple of Brown-necked Ravens from the bus during the journey.

The wind did not let up until after dinner and we are expecting it to resume tomorrow, so our sightings maybe much fewer than usual.