The wind was persistently high today and quite annoying. We took an early breakfast and left the Café Yasmina and drove across the desert tracks to a wadi where I have often seen Desert Warbler on previous visits.

We walked from east to west with the sun and the wind in our backs and started noting a few birds but not many. A small group of three Cream-coloured Coursers sat motionless off to the right of the wadi, I guess they were fed up of the wind too. 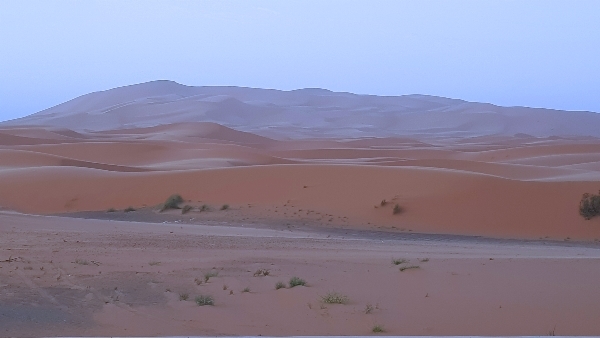 Erg Chebbi dune systemit and heard it call, it was a Red-throated Pipit, a great find in Morocco.

We then drove to the area where in some years there is a huge shallow lake called Sri Dayet to the west of Merzouga. We found a group of four Bar-tailed Larks along the way and a Black Kite. The lake was completely dry, such a shame as many birds gather there when it present. We did not another Hoopoe Lark along the edge of the dry lake.

Next we drove up to Rissani and took the ‘tourist’ route around the town, we made a few stops and walked through the dry mosaic of fields looking for the very locally common Magreb Lark (formerly Long-billed Crested Lark), it took a while but we eventually found a couple of pairs, they were quite confiding in the end. We also noted Woodchat Shrike, Greenfinch, Barn Swallows and l;ots of House Sparrows. 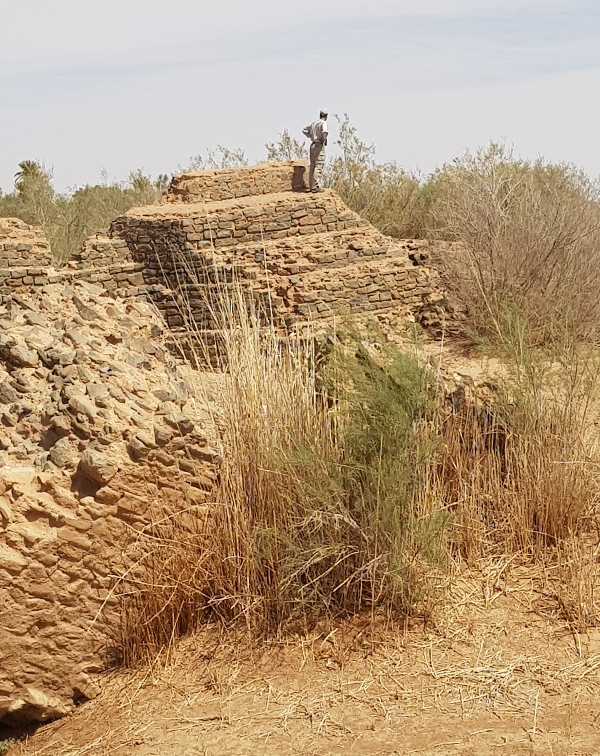 a broken bridge over the River Gheris

We picked up lunch supplies in the town centre and drove a short distance to the dry river bed of the Oued Gheris to east it. Both banks of the dry river had mature Tamarisk Trees which gave us some shelter from the wind and gave us an opportunity to look for the resident population of the Saharan Olivaceous Warbler. One bird appeared and showed relatively well and was joined by a single Bonelli’s Warbler, but the windy conditions did not help.

Another section of the Oued Gheris can be found on the road to Alnif just outside of Rissani to the west, in past years this area has been very productive including good sightings of Blue-cheeked Bee-eaters. But today it was completely dry except for a tiny pool which held one dragonfly! We did find a couple of pairs of Crested Larks, a pair of White-crowned Wheatears and one guy heard Bee-eaters in the distance.

the view from our Auberge, Cafe Yasmina

Our last port of call for the day was a hidden valley a few kilometers to the west of Rissani, we had drive past a large rubbish tip to get there where we saw a dozen or so of Brown-necked Ravens. We approached the huge bowl shaped valley from the top of a ridge and walked down the slope with a strong wind in our faces. Walking down the slope we found a pair of Desert Larks and a couple more Brown-necked Ravens. 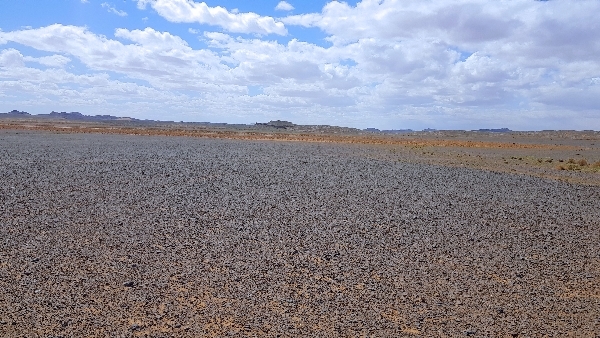 a more typical landscape in the desert region of Merzouga

At the bottom of the bowl we spread out and walked through an area of scrub looking for Sandgrouse, but our first encounter was with a nice male Spectacled Warbler. Then we found a small group of Crowned Sandgrouse, not what we were hoping for but Sandgrouse nevertheless. Not long afterwards we found a second small group of sandgrouse, these we thought we Spotted Sandgrouse but they flew off before we got a definite ID of them because they we facing away from us most of the time.

We walked 500 meters out of our chosen path to look for this last group again. Where we thought they landed we fund two groups of sandgrouse and got good views of both. They were both species, Crowned and Spotted Sandgrouse.

Finally we walked to the bus which was waiting for us at the western end of the valley, we had walked some distance today and all were tired. We drove back to the auberge arriving at 6pm, it was still windy, some of the group walked went of r a walk around the grounds of the auberge, a seasonal pool sometimes appears in the winter if there is enough rain but it is usually dry by mid-March and that was the case this year. However, the area is populated by tamarisk shrubs which are an attraction to passing warblers and suchlike.

We found Subalpine, Common Chiffchaff, Bonelli’s Warbler and Northern Wheatear during a 30 minute walk, it was still windy we finally returned to our rooms to get ready for our 8pm dinner.