After another early breakfast we set off for our longest journey of the trip, we hoped to cover 400km and make it to Taliouine before dark. Things went really well, we were loaded up by 7:30am and on our way.

After 30 minutes we were on  the outskirts of Rissani when we stopped to look at a Little owl sitting on old building, a nice Saharan subspecies for our list. We searched for Blue-cheeked Bee-eater in the suburbs of the town without luck but we did find a second Little Owl, Laughing Doves, White-crowned Wheatears, Magreb Larks and a few Barn Swallows.

We put some miles on the clock before we stopped again, during that time we saw both Brown-necked and Common Raven, Desert, Northern and White-crowned Wheatears, Fulvous Babbler and several Woodchat Shrikes.

Just before Alnif we stopped to look at a number of birds in the sky, they were Barn & Red-rumped Swallows, also House Martins and two Ruddy Shelduck flew by. On the ground near a large water tank we notched up several species: European Bee-eater (10), Willow Warbler, Common Redstart, Hoopoe, Great Grey Shrike, Wryneck, Trumpeter Finch, Collared Dove and House Sparrows. What a productive little stop that was. 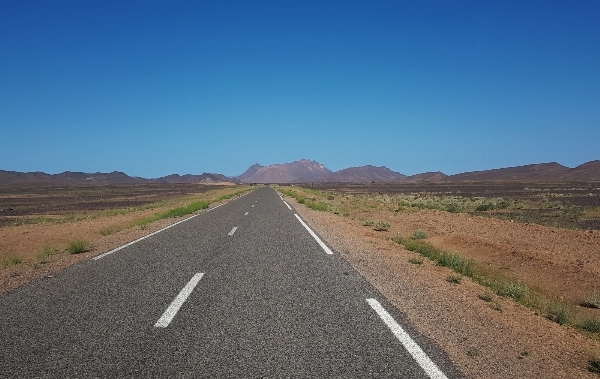 there are not many places that you can find empty, open roads like this

At Agdz we stopped to buy lunch and drove a few miles out of town to eat it. We sat in an area of scattered trees and saw very little bird life whilst we sat and ate.

We made a couple of impromptu stops to look at more European Bee-eaters but didn’t see much else until we stopped at Tazenakht. From a track we walked across a large expanse of a dry stony plain with sparse vegetation, I have walked this area several times in the past and seen sandgrouse there.

After just 10 minutes we found a flock of 12 Black-bellied Sandgrouse, then 8 more flew up and finally another two birds flushed in front of us. We tracked the birds as they flew down to a ridge and landed. We eventually had good views of them in the scopes. 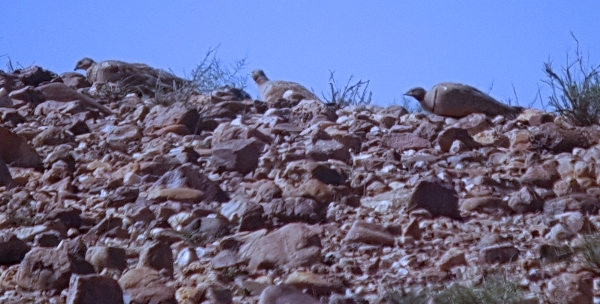 record shot of Black-bellied Sandgroups, our fourth species of the trip

In the meantime a Hoopoe Lark was doing  his best to attract our attention by performing his kamikaze flight display, we also saw a Thick-billed Lark flying off in front of us, Desert, Black and Northern Wheatears, Desert Lark, Great Short-toed Lark, Cream Coloured Coursers, Woodchat Shrike and another Hoopoe.

We left the sandgrouse spot at 4pm and spent the next hour or so travelling final leg of our journey to Taliouine, we arrived in good time to settle into our rooms and go for a walk in the woodland near river behind our hotel. 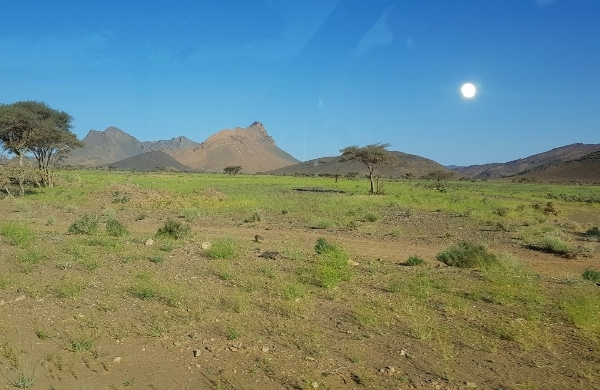 Morocco is much greener this year after late rains in February

We spent an hour and a half walking slowly through the wooded area to the dry river and back again. Lots of common 'English Garden' birds were on show, Great Tit, Greenfinch, Blackcap, Common Chaffinch, Blackbird, House Sparrow and Collared Dove. But, we also saw Common Bulbul, Sardinian Warbler. Cirl Bunting, Spanish Sparrow, Serin, African Chaffinch and Corn Bunting. Just before we returned to our hotel we noted a huge flock of Black Kites drifting over, we estimated there to be between 120 -150 birds.

We finished the walk at 7:30pm and got ready for dinner at 8pm. Yet another tajine was enjoyed by all. Some of the group went out for an Owl prowl after dinner and were unsuccessful in finding any.