A mixed bag of fortune today especially with the weather as we travelled south-eastward towards the desert.................

TRANSFER FROM OURIKA VALLEY TO BOUMALNE DADES VIA QUARZATATE

The weather more or less ruined our first morning’s birding, it was very cloudy and it was raining when we emerged from the hotel after a very early breakfast. We packed the bus with our luggage in preparation for our long journey to Boumalne Dades, we intended to be on the road all day making many stops along the way.

As we drove down the Ourika Valley the sky brightened and the rain eased off to a drizzle, our first stop was just 10km along the road at a place I favoured to look for the Endemic Levaillant’s Woodpecker. Would you believe it? As soon as we stepped off the bus a Levaillant’s ‘pecker flew across the road from behind us and landed in the nearest tree! Incredible! We ‘scoped’ the bird for 5 minutes as it obligingly posed for us. 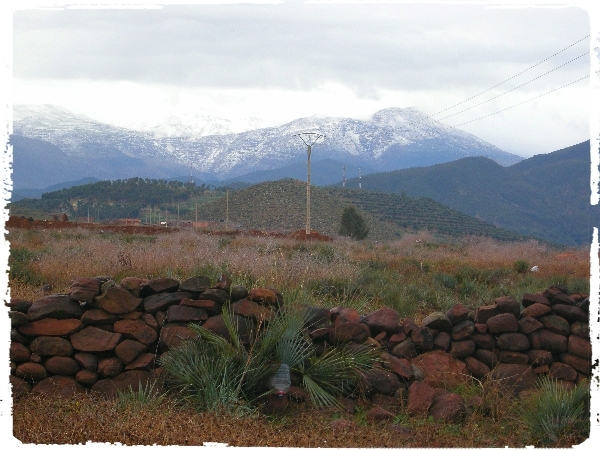 After that excitement the morning walk went down-hill rapidly because the planned route alongside a small stream was semi-flooded and ended up in a flooded field. We had to turn back and abandon the walk, nevertheless, we did see a few species; European Robin, Blackcap, Cetti’s Warbler, Sardinian Warbler, African Chaffinch, Common Bulbul, Great Tit, African Blue Tit and lots of Blackbirds and Cattle Egrets.

We set off again and some 20km along the route we stopped to bird from the roadside, we had a wonderful view over a flat plain and back to the snow covered Atlas Mountains. If the cloud cover wasn’t so invasive it would have been a wonderful sight. From our view-point we watched Moroccan Magpie, Barbary Partridge, Thekla Lark, Bonelli’s and Sardinian Warblers, Spanish Sparrow and lots of Cattle Egrets. 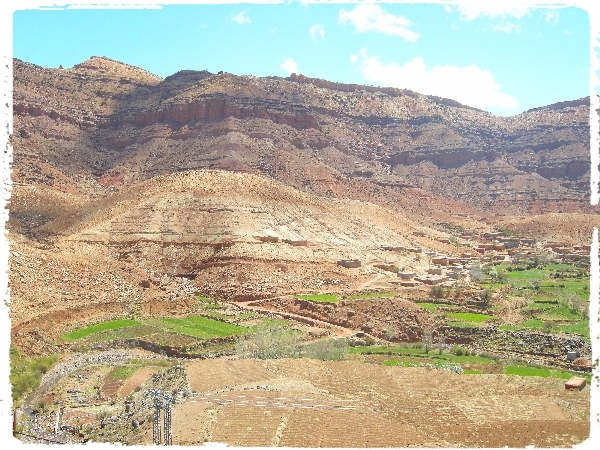 TAKEN FROM THE TERRACE OF OUR LUNCH-STOP RESTAURANT

On the other side of the pass the cloud cover dispersed but the wind picked up. Our lunch stop and a short birding break was thwarted by a strong wind, we did see Bonelli’s Warbler, Black Wheatear, Thekla Lark and Black Redstart but there should have been much more.

A couple of more stops were made just east of Quarzatate, the first was at a small stream where a flock of Barn Swallows were feeding low over the water, they were joined by a few Red-rumped Swallows, also along the banks we found Meadow Pipit, White Wagtail, Eurasian Chiffchaff and a flock of European Bee-eaters flew by.

Our last main birding stop was at the huge Quarzatate Reservoir, but our enjoyment was spoilt by the strong wind. We had to huddle behind a building to search the lake which produced; Great Cormorant, Ruddy Shelduck, Redshank, Grey Heron, Northern Shoveler, Kentish and Ringed Plover and mot much else. 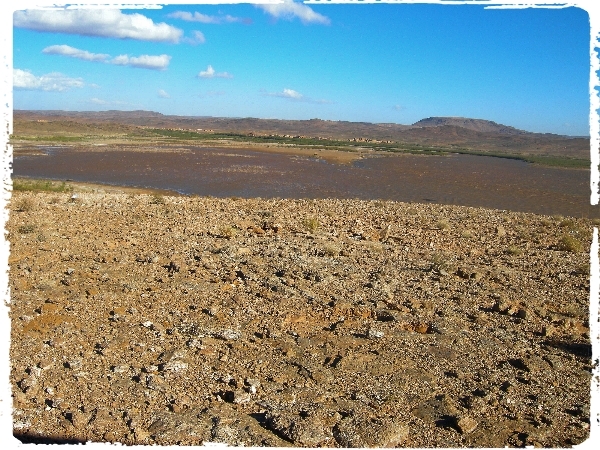 THE EASTERN TIP OF THE RESERVOIR AT QUARZATATE

The stony-desert plains surrounding the reservoir turned up a Desert Wheatear and as we continued to Boumalne Dades we added both Marsh Harrier and Black Kite to the trip list.

We arrived at our hotel at 6:20pm, it was still light and still very windy, so no more birding. We a lovely meal at 7:30pm retired to bed a couple of hours later.