BOUMALNE DADES – TAGDILT TRACK – DADES GORGE The weather dominated our day out today, it was very cold with snow at times and a strong North-Westerly wind hampered our afternoon birding enjoyment.

After a very early breakfast we set out from the hotel on foot across the huge expanse of stony-plains situated right outside the main gate. We set off towards a mini-rubbish dump some 500 meters away. The sky was clear the temperature was around freezing and the breeze had a cold bite to it. It was a struggle to find any birds but we did eventually see Northern, Red-rumped, Black and White-crowned Wheatears. A few Thekla Larks appeared and we saw distant Blue Rock Thrush. 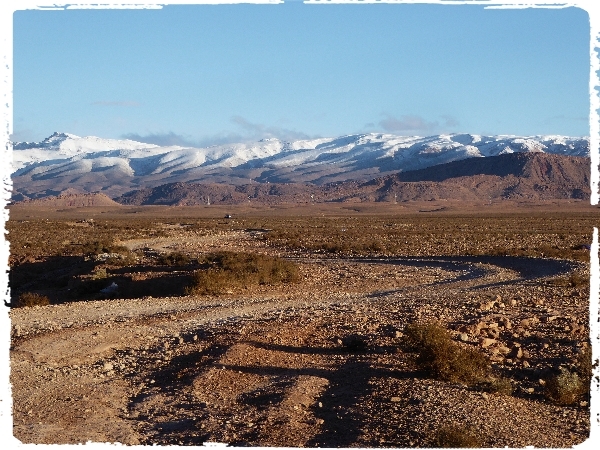 view northwards from the Tagdilt Track

We then jumped onto the minibus for the short trip to the Tagdilt Track, so called because it leads to the village called Tagdilt! The first section of this dirt track takes you through a huge rubbish tip where litter is strewn across the landscape as far as the eye can see. Packs of stray dogs roam the ‘tip’ and sometimes the smell isn’t very pleasant. I paint a sordid picture of the site but in fact it is a haven for birds, they seem to love it. 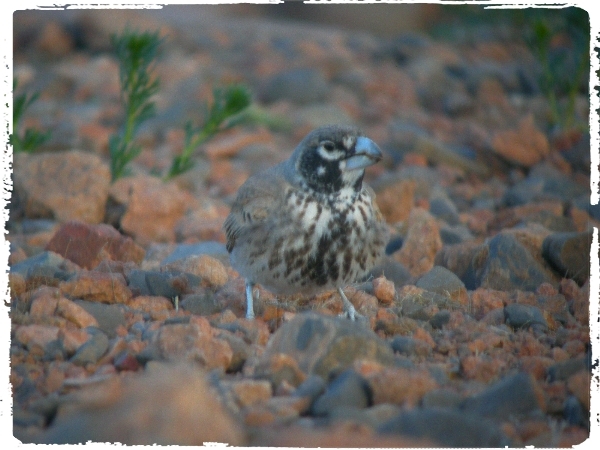 For a couple of kilometers we walked towards the tip and we saw all sorts of birds, but the best by far was the THICK-BILLED LARK, we had great views of around six of them. We also saw Thekla, Crested, Greater Short-toed and Skylarks. Trumpeter Finches showed well, as did Desert & Red-rumped Wheatears, Temminck’s Horned Lark, a couple of Long-legged Buzzards stood not too far away.

From there we drove to the new Tagdilt-road and after a short while we stopped at a site where seasonal pools usually form after rain. Alas no water was there but to our great surprise a huge flock of some 60+ Pin-tailed Sandgrouse were! I inadvertently flushed them much to the disappointment of the group, they were so close but I never saw them. we watched them for 5 minutes as they circled high above us but they never returned. 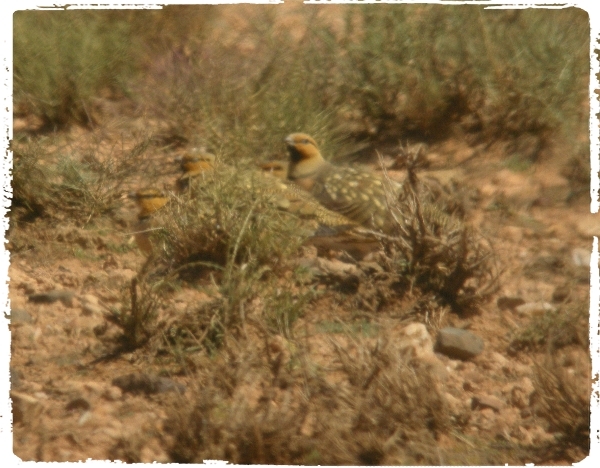 Moving on we drove another 5km to a small farming area where a tree-lined stream feeds some small agricultural fields. It was quite windy but we notched up quite a few species as this little green ‘oasis’ was an obvious magnet for birds. 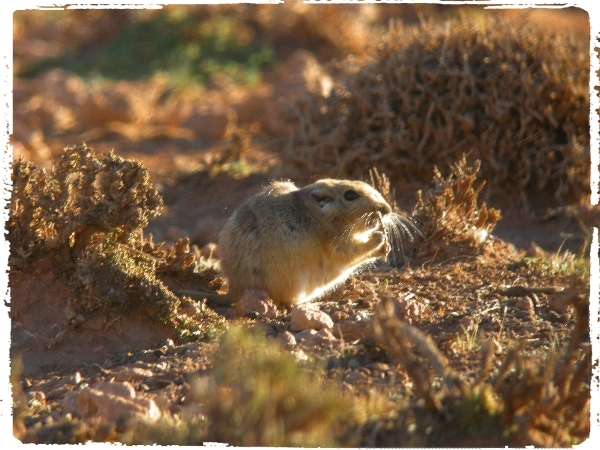 After that excellent diversion we set off back to ‘reggs’ or stony plains to look for a few species missing from the list, we stopped to photograph a herd of nomadic Camels along the way.

Back on the Tagdilt Track we soon found Temminck’s Horned Lark and Greater Short-toed Lark and whilst watching the later we discovered a pair of Cream-coloured Coursers, fantastic! Our route took us onto higher ground where the wind was stronger but the view back to Boumalne Dades was stunning. 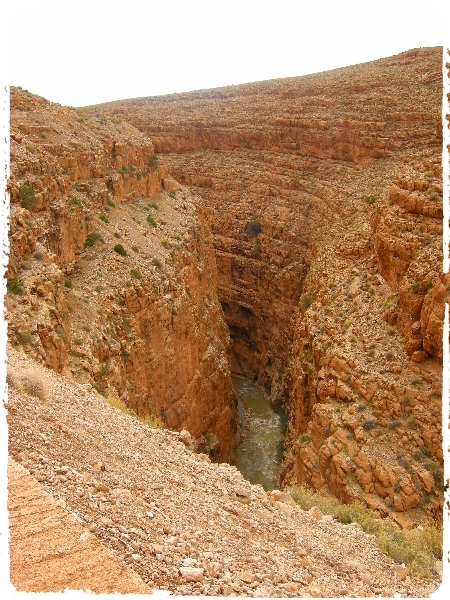 A probable Lanner Falcon was seen high up in distance and the very next land bird was, in fact, another Lanner. The bird flushed from a ground perch as we got out of the bus on one occasion, it landed in view but very distant.

It was now late morning so we headed back towards the hotel for lunch but we made a short diversion to the roadside ‘pools’ to try to see the sandgrouse again. A quick stop along the way to look at a Common Kestrel  resulted in the finding of a Common Pratincole, another nice species to see. 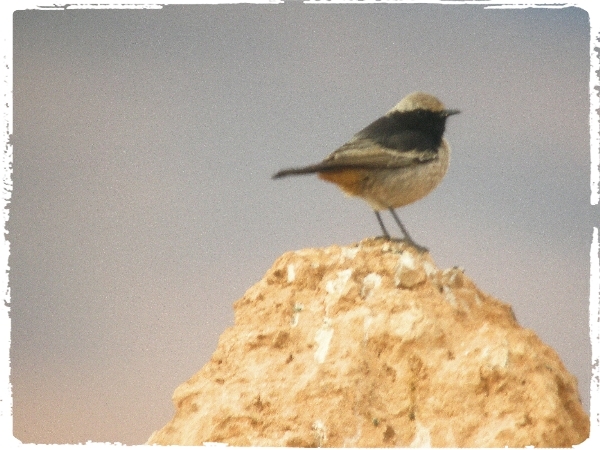 The Pintail Sandgrouse were back but a little distant from the road so we slowly crept from the bus and got within 30 meters of them, not close enough to flush them but within camera range, click, click!

Lunch was taken back at the hotel and by 1pm we were back on the bus heading to the Gorge du Dades, one stop at the cash point in town provided us with sightings of a Booted Eagle. The journey up to the top of the gorge took us through sprawling suburbs and varied landscapes with some incredible rock formations. The ever present Oued Dades was always by our side, we made a couple of stops where we found Eurasian Siskin, Blackcap, Grey Wagtail, White Stork, Crag Martin, Blue Rock Thrush and a fly-pass Laughing Dove.

At the head of the gorge we soon found our target species, the Tristram’s Warbler, it showed extremely well and as we enjoyed a coffee stop we also enjoyed the company of Black Wheatear, Blue RocknThrush and House Bunting. 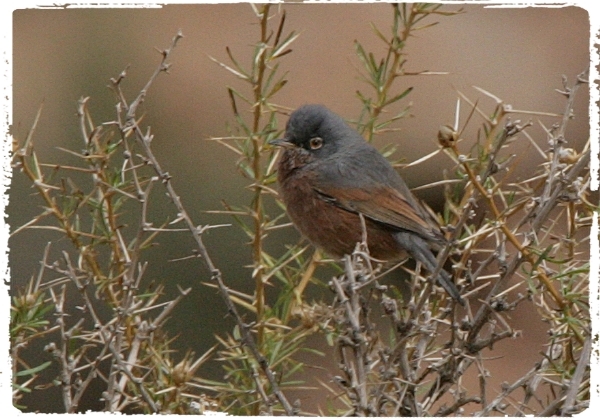 Back at the hotel at 4:30pm we walked across a small area of the plains to look for Desert Lark, after about 20 minutes we found two of them, we also had cracking views of Thick-billed Lark and Thekla Lark. But best of all was the sighting of a male Seebohm’s Wheatear, it was a corker and showed very well but it was flighty. The cold biting wind eventually drove us off, we finished for the day at 5:30pm and took an early shower.

Dinner was another lovely tajine, lamb with prunes, sliced boiled eggs and almonds, in a lovely sauce, delicious!