We had a smashing day, the weather was almost perfect, bright sunshine, but with a chilling breeze which made it feel cold for most of the day.

An early breakfast of crêpes, eggs, bread, cheese, jam, olives, cake and lovely coffee saw us out of the hotel before 7:30am, there was quite a chill in the air to start with. Around the hotel we saw House Bunting, Blue Rock Thrush and a pair of Black Wheatears. 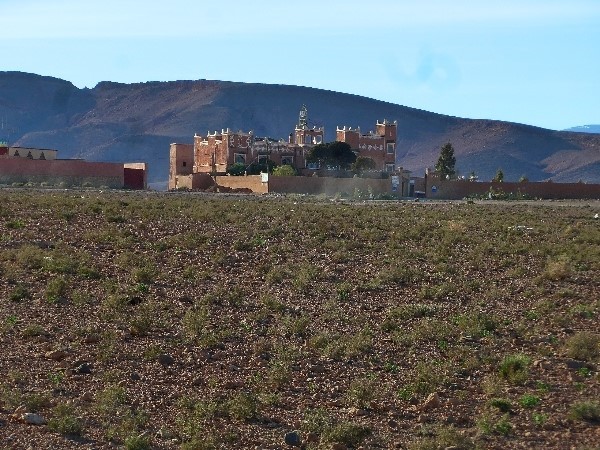 A view of our hotel looking back from the 'stoney plain'

We then set out on foot and walked across the ‘Regs’ (stony plains) just outside the hotel, soon we were watching wheatears; both Northern and the Black-eared varieties to start with then we added Thekla Lark, White-crowned Wheatear and Desert Wheatear.

We made our way to a small area that is obviously used as a ‘rubble-tipping’ site, the mounds of rubbish attracted a few birds. We found a single Greater Short-toed Lark and a few more Thekla Larks but not much else, it was disappointing compared to previous years.

We then jumped onto the bus and travelled the short distance to the Tagdilt track where we spent the next 2-3 hours visiting another rubbish tip, how nice. We found lots more birds there including Red-rumped Wheatears, White Wagtail, Crested Lark, Trumpeter Finch, Temminck’s Horned Lark, a Great Grey Shrike and the star bird……..Thick-billed Lark. We had great views of all of the above. 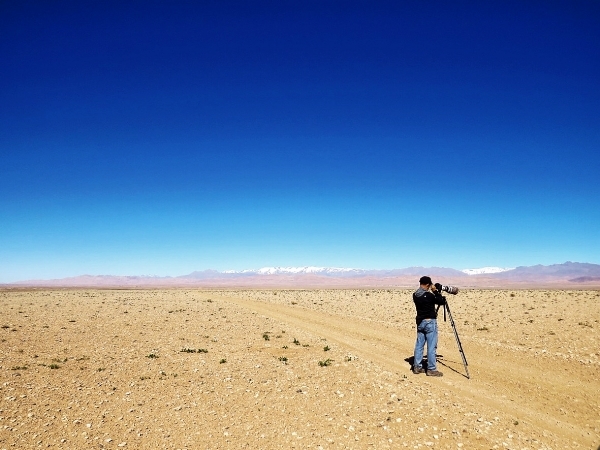 On the Tagdilt Track - Steve Zarate taking pictures of wheatears

A few raptors appeared, first we found a Long-legged Buzzard perched on a mound of rubble then several Black Kites took to the air. After an hour or so we climbed back onto the bus and headed further along the Tagdilt Track away from the rubbish tip.

Birds were few and far between it always amazes me that more species can be seen near human rubbish dumps than out in the field. We then found a few goodies starting with a pair of Desert Larks that showed well. Then a couple of Cream-coloured Coursers were seen in flight and not long afterwards we saw several on the ground having geat scope views of them. 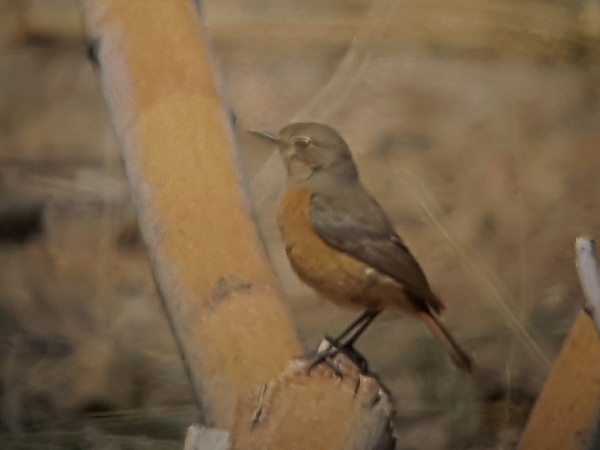 not a very good shot of Mousiere's Redstart

A pair of Hoopoe Larks delighted the group a ‘most wanted’ species now in the bag. We continued for sveral kilometres stopping occasionally to watched species already listed, a flock of some 20+ Greater Short-toed Larks were nice to see and a displaying Hoopoe Lark was good to see.

Eventually we turned off the the track and back onto a metalled road, driving another 5km to a small farm holding where a kind of mini-oasis occurs. A small area of cultivated land is surrounded by bushes and trees and usually hold a number of migrants. Today it was a little quiet with fewer warblers about but we listed some nice migrant species. 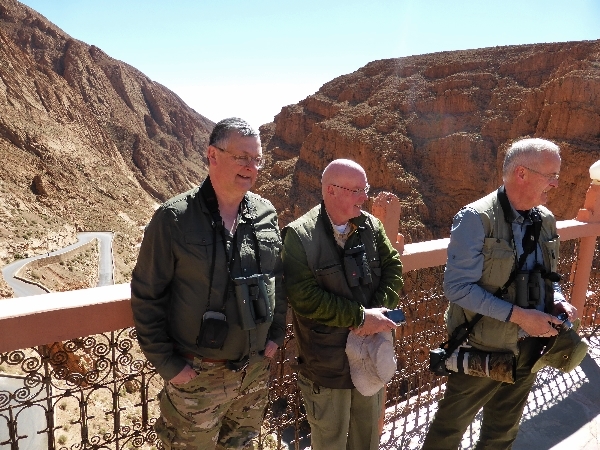 The Irish trio in the group - Richard, Theo and Stuart

From the ‘oasis’ we drove back into Boumalne Dades to buy our picnic supplies and then we drove into the Dades Gorge. We hadn’t travelled far when a large raptor appeared low over the road, we pulled over quickly and jumped out. The bird was an adult Bonelli’s Eagle, a superb bird, two Common Kestrels were mobbing it, we had great views of it. At the same time we noted 3 species of swift, Alpine, Common and Pallid, they were all moving northward up the valley.

At the head of the valley we had great views of the spectacular gorge but we were there for birding not sight-seeing! A long walk in very blustery conditions eventually produced our target species. We found a sheltered spot and searched the scrub for the Tristram’s Warbler which finally showed extremely well, great result. Other species noted during the walk included: Black Wheatear, Barbary Partridge, Crag Martin and Blue Rock Thrush. 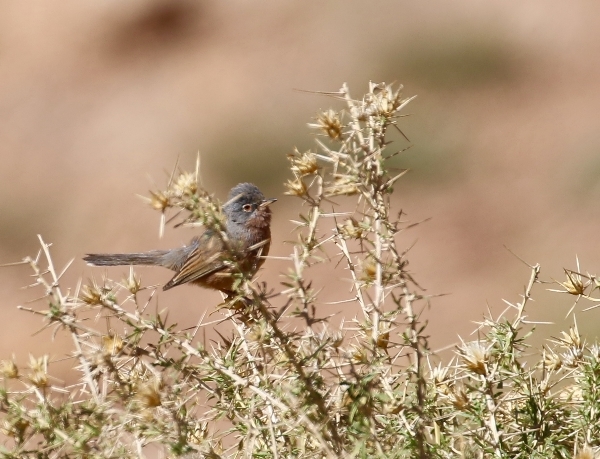 After a quick cuppa sitting on the terrace of a restaurant in the sunshine we drove back to the Tagdilt Track to look for more species. Unfortunately, it was blowing a gale and we had to abandon our quest. An early finish found us back at the hotel at 5pm in good time for our 7pm dinner which was a Berber style omelette, delicious.