it was chilly at first light when we emerged from our rooms, the morning sunrise was spectacular, vibrant reds and orange it was worth getting up just to see that. We trolled the grounds of the Auberge and soon it was light enough to pick out a few species. The flock of European Bee-eaters was still there making a lot of noise as they contemplated their day ahead, I’m pretty sure that they will leave shortly to continue their northerly migration to Western Europe. 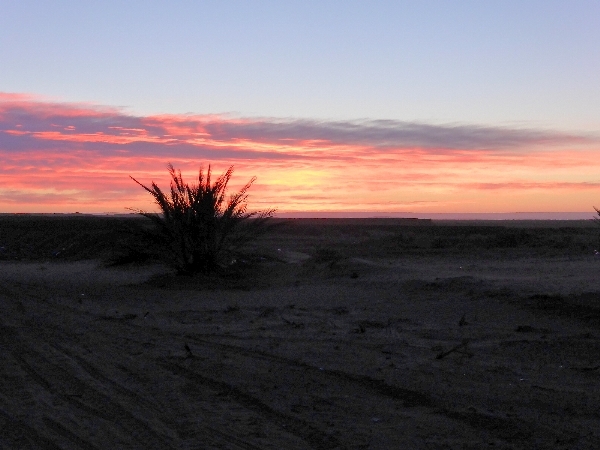 We found the usual Eurasian Hoopoe, Woodchat Shrike, Northern & White-crowned Wheatears, Subalpine and Bonelli’s Warbler and luckily for most of the group the Western Olivaceous Warbler was still feeding in the tamarisk trees. 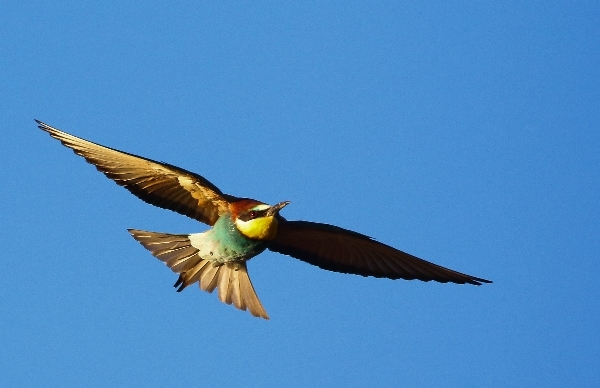 After a delicious breakfast taken outside in the courtyard we set off for Rissani which entailed a trek across the desert of some 5km before reaching the metalled road. We hadn’t gone far when we bumped into a number of birds; first a group of Cream-coloured Coursers appeared then we found Hoopoe Lark and a small flock of Greater Short-toed Larks. It was around 9am when we arrived at Rissani, a tourist route circumnavigates the town passing through some tiny villages and picturesque countryside, we took that route. 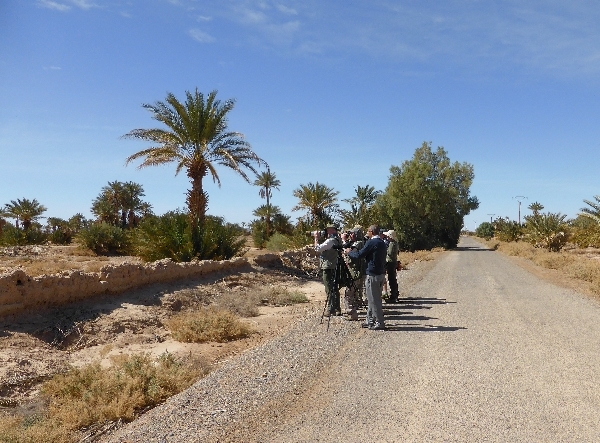 on the 'tourist route' at Rissani

During a series of walks and rides on the bus we covered about 15km, it was hard going as the sun was hot and the breeze had disappeared. We found lots of Great Grey and Woodchat Shrikes, House Buntings, Laughing Doves, Wheatears but not many migrant warblers and no Blue-cheeked Bee-eaters (normally this area is swarming with them).

The Magreb Lark (formerly Long-billed Crested Lark) was very common and we did see lots of Barn Swallows, House Martins and Common Swifts, at one point a single Long-legged Buzzard circled ahead of us.

After a couple of hours of walking we finally bumped into one of our target birds, the Fulvous Babbler, we found a flock or family party of about eight birds, they were extremely obliging and came very close to us, fantastic, a little pressure was off! 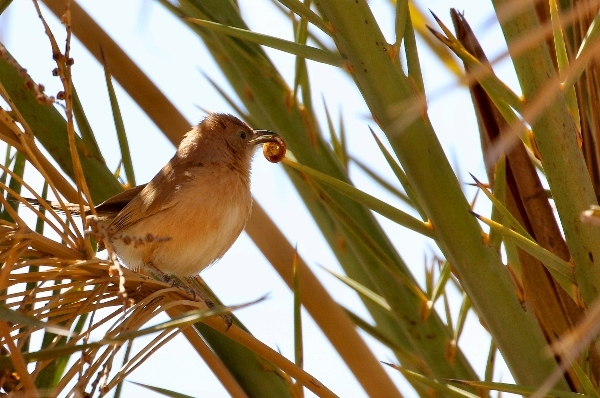 Next we drove into Rissani to pick up lunch before driving just a couple of kilometres out of town to search for Saharan Olivaceous Warbler. A dry river bed (wadi) was our venue with an avenue of mature tamarisk tree on raised banks either side of us. The trees held many warblers, mostly Western Bonelli’s and Subalpine Warblers but also Serins.

Again it took a while but we found our target bird the Saharan Olivaceous Warbler, nice one. A large group of hirundines held Barn Swallows, Sand Martin, Crag Martin and House Martins and whilst we were watching those we heard the distinctive call of the Blue-cheeked Bee-eater. Before long a single bird flew over us, we saw it for about 20 seconds but we all had good binocular views and one or two of the group got good pictures of it. At last, Blue-cheeked Bee-eater on the list.

Another wadi was our next venue but this one, found just out of town, still had several pools of water sitting there. We were hoping for a few waders, herons and egrets but all we saw was a pair of Ruddy Shelduck and a distant Brown-necked Raven!

Moving on, our next venue was ahuge flat plain covered in scattered scrub, it is a place where I have seen sandgrouse during previous visits. Most of the group were up for a long walk in the heat of the afternoon, a nice breeze encouraged us. 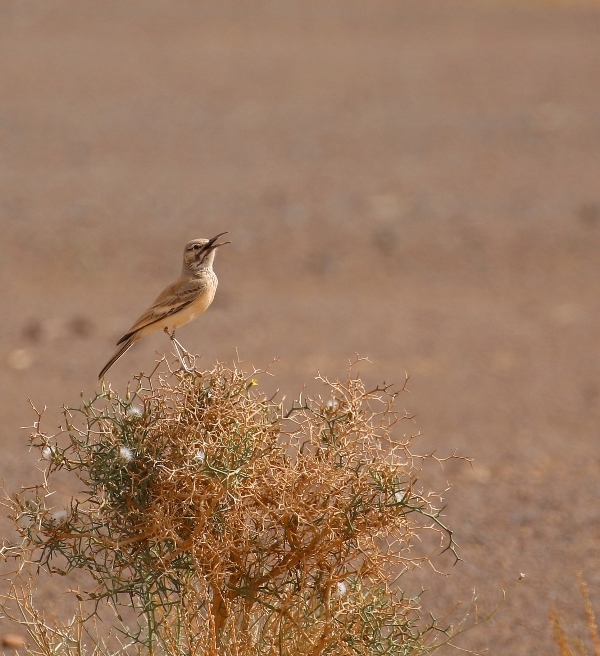 The Hoopoe Lark in full song - taken by Stuart McQueen

About half-an-hour into the walk a group of 9 sandgrouse took to the air, luckily for us they landed about 200 meters away, so we approached carefully and got good scope views of 9 Spotted Sandgrouse, smashing! We also found a pair of Hoopoe Larks, the male was singing and occasionally performing his flight display. During the walk we also noted Trumpeter Finch, Bar-tailed Desert Lark and many Desert Wheatears.

Before heading tour next hotel we stopped at the Rissani Rubbish Dump, how nice. Brown-necked Ravens and Black Kites were observed as well as a number of White Wagtails and with them were a few Yellow Wagtails. We noted iberae and flavissimo races of Yellow Wagtail with one extremely bright male flavissimo geeting us excited thinking we may have found a Citrine Wagtail! But it wasn’t.

We drove to the Egr Chebbi Sand Dunes found at Merzouga and where our next hotel is situated. It was around 5:30pm when we checked-in, most of the goup relaxed in their rooms before dinner at 7pm. One or two ventured onto the main terrace where a ringing group were at work, they were wrapping up for the day but showed us a ‘Greenland Race’ (leucorhoa) Northern Wheatear in the hand, that was nice to see. A passing Booted Eagle drifted by over the dunes and a group of 5 Ruddy Shelduck flew past.