We had a great day today, it was our best day as far as bird numbers are concerned, we saw over 90 species and took our trip total to 162. At 7:00am we met for breakfast and before 8am we loaded onto the bus and on the road. Species seen around the hotel included; Thekla Lark, Blue Rock Thrush, African Chaffinch, Serin, many Common Bulbuls and lots of common species. Generally migrant species we again low in numbers and a bit disappointing. 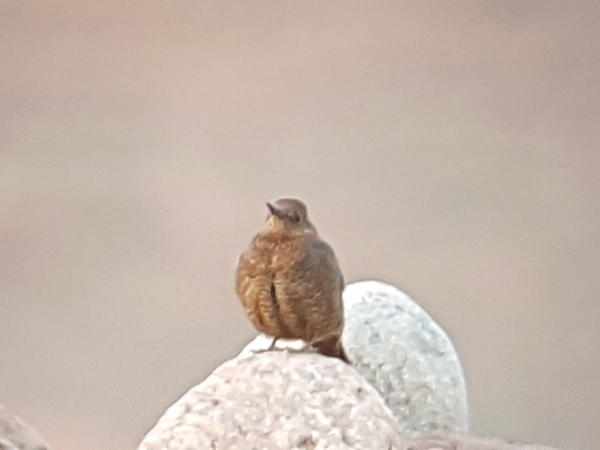 The last leg of our journey to the coast was ahead of us, we still had 200km to go with a couple of scheduled birding stops along the way. Our first stop was in the scenic gorge just passed Aoulouz, the river Sous flows through the gorge and usually holds a good number of species.

From the road bridge we soon found Glossy Ibis (3), Grey Heron, Little Egret, Common Moorhen, Little Grebe, Ruddy Shelduck and lots of Common Bulbuls. A star find was that of Little Bittern, a male dashed about from reed-bed to reed-bed and often calling (barking).

Our walk into the gorge was very pleasant, beautiful sunshine, a cool breeze with a temperature around 23C, just smashing! A pair of Common Kestrels entertained us with their impressive courtship display, we noted Green and Common Sandpiper, Sedge Warbler, Grey Wagtails and plenty of warblers were flitting about in the scrub. 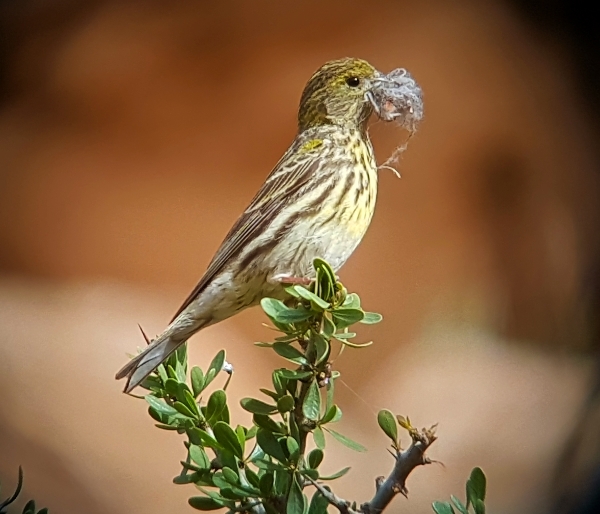 two pictures of Serin - female above and male below 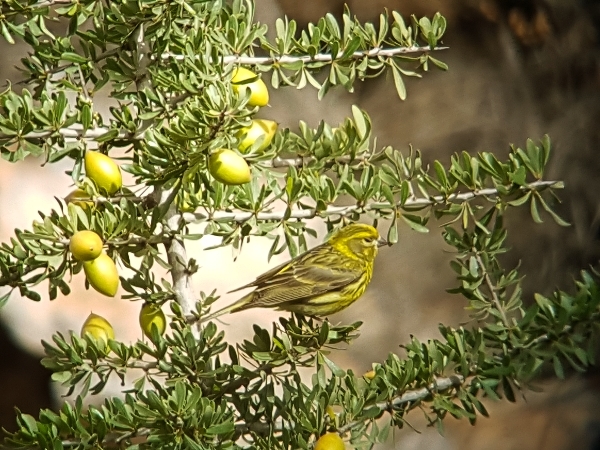 Further into the walk we failed to find the usual Peregrine Falcon but we did see a White Stork and a flyover Booted Eagle. We heard and found Common Nightingale, but we failed to find the usual Night Heron roost. But a nice surprise was the finding a Black-crowned Tchagra, this bird showed well for a short while before flying up high into a bush on the top of the cliff face, we all had good views but many of the group would like more!

Finally as we came back to the road bridge we spent more time looking for ‘crakes’ by scanning the reed-beds and water margins. Eventually we found two Little Crakes, one of each sex. Everyone was happy with their views of this species.

After that excitement we continued our journey, the landscape changed as we moved into the Sous Valley, rolling hills were covered by a ‘forest’ of Argan Trees, all in fruit. But after a while we passed into flat scrubland again and this is where we took our second walk.

Once we got out of the bus we searched our target bird, the Black-winged Kite, but we couldn’t find one. Other species seen during our walk were Eurasian Hoopoe, Greenfinch, Woodchat and Great Grey Shrikes, Black-eared Wheatear and a flock of some 30+ Short-toed Larks.

Moving on we made good progress, we made one quick impromptu stop to look at a pair of Black-winged Kites that circled over a roadside field, they soon rose to a great height before drifting off. We reached Agadir by 3:30pm, we logged Pallid Swifts and a number of Common Kestrels over Touradant and lots of Maghreb Magpies near Agadir.

After checking into our hotel, unpacking and a quick change we were ready for a good walk, the estuary of Oued Sous was the venue this time. We were dropped off about 2km from the river-mouth, we intended to walk the 2km and back in the 2 ½ hours we had at our disposal.

We made slow progress because there were so many species to see! We searched some scrubland for Stone Curlew without success but we did find Great-spotted Cuckoo, lots of Magreb Magpies and a few Sardinian Warblers. Later we did see a fly-over Stone Curlew but we couldn’t relocate it on the ground. 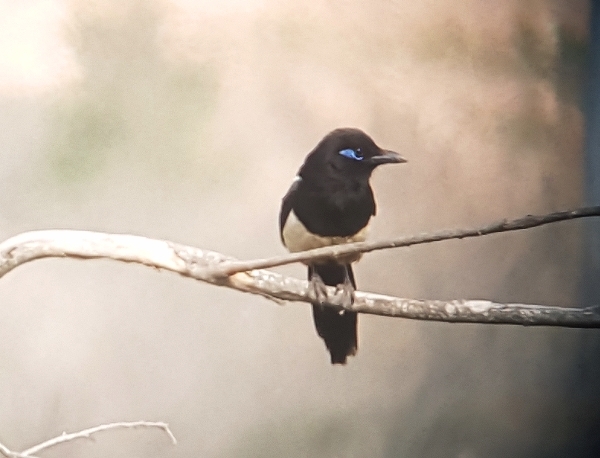 As we made our way down river we saw Greater Flamingo, Eurasian Spoonbill, Grey Heron, Little Egret, a flock of White Storks,  Common Redshank, Common Greenshank, Black-headed, Mediterranean and Yellow-legged Gulls, they were loafing on a sand-bar with groups of Gull-billed and Sandwich Terns. A few meters further on we had good close views of Mediterranean Gulls near a sewage outflow. Then we found a Little Gull on the opposite bank, a smashing find and to top that a Slender-billed Gull sat in the same area. 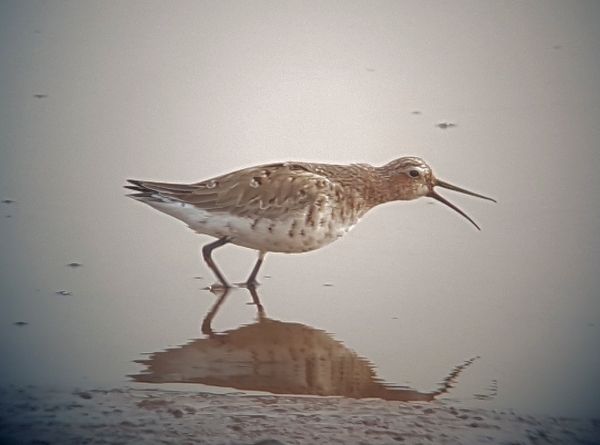 Further along on the opposite river bank we watched a host of waders of all shapes and sizes feeding on the muddy shore, from the biggest, Eurasian Curlew, to the smallest, Little Stint, most families were represented. Limosa, Pluvialis, Charadrius, Calidris & Tringa. Also Pied Avocet, Black-winged Stilt, Oystercatcher and both Black & Bar-tailed Godwits. 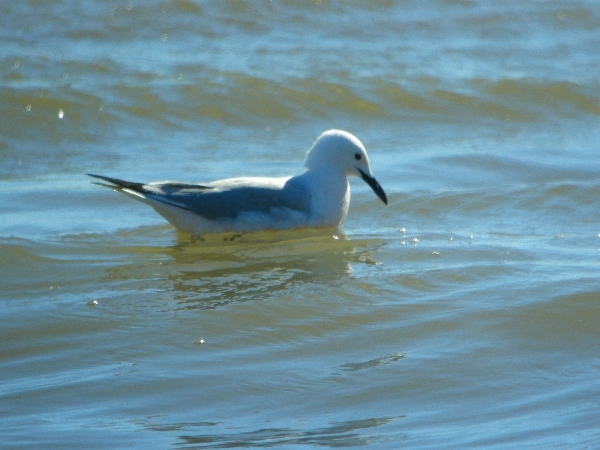 Nearer to the shoreline the river spread over a large area of sand, fewer birds were feeding there but we had great views of Sanderling, Curlew Sandpiper, Dunlin, Kentish  & Grey Plovers and we found a Little Gull and a single Red Knot.

We never had time to walk the entire length of the estuary so we turned back about half-way along, in the heathland on the northern bank we found Zitting Cisticola, Sardinian Warbler, Magreb Magpie, a fly-over Marsh Harrier and some Linnets.

A tired group arrived back at the hotel, dinner was taken at 8pm we all retired to bed at 9. Tomorrow will be an early start as we are visiting Sous Massa National Park.