WEATHER; cloudy with blustery gales, wind speed up to 30mph. bouts of rain but mild, with top Temp 12C

This was our epic start to the New Year, yet another attempt at seeing 100 species on January 1st. Today I was with Guy Campbell and my hopes were high for success, the weather looked good enough for a full day out instead of the usual abandonment around lunchtime.

Guy picked me up at 6:45am, yes 6:45am on New Year’s Day, “get a life” some might say! Well, birding is a big part of my life, I answer. We set off for Middlebere at Arne, we hoped to arrive just at it got light.  A Robin was our first bird on the list it was singing from the trees around my garden and five minutes later number two went on the list as we stopped a couple of miles down the road to listen out for Tawny Owl which duly obliged.

It was a quiet journey down to Dorchester and then onto Wareham, the roads were clear as expected and as we arrived at Middlebere near Arne it began to get light. It was an amazing red sunrise which did not bode well, it indicated rain was on its way. It was super windy too, we saw Blackbird, Carrion Crows, Wood Pigeon and Magpie along the track to the hide. 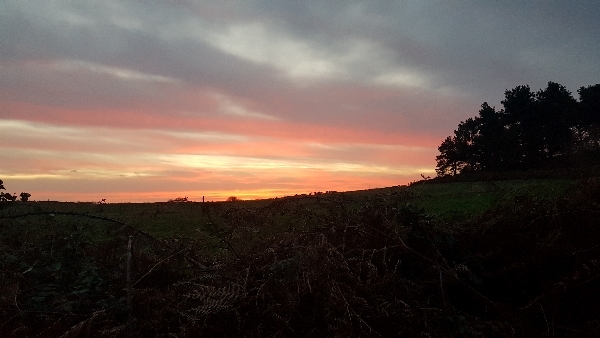 you know what they say about Red Sky in the morning? Well its true!

Unfortunately for us the tide was high and the marshes were flooded. We quickly listed Lapwing, Avocet, Shelduck, Spotted Redshank, Black-tailed Godwit, Curlew, Teal, Wigeon and Black-headed Gulls. Had the tide be low we would have added a few more species of wader. 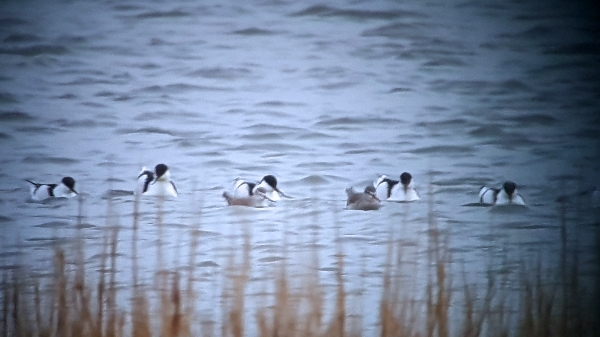 As we left the hide we found a Ringtail (female) Hen Harrier, smashing, our bird of the day so far. Back at the car park we walked across to Hartland Moor to look for Dartford Warbler, we found Bullfinch and nothing else.

At RSPB Arne we birded the sheltered car park where to our great surprise we found two Firecrests, wow they were very close! At the feeders and in the trees we added Great, Blue, Coal and Long-tailed Tits, Chaffinch, Redwing and we heard Nuthatch. Whilst I was in the loo Guy found a Great Spotted Woodpecker. We searched for a while for a Treecreeper but all we found was Goldfinches.

At Stoborough Heath we saw two Mistle Thrushes along the lane and we spent quite a while looking for Dartford Warbler and Stonechat. After three different stops we finally found a Dartford which sat out nicely singing from a sheltered spot we also added Kestrel, Raven, Rook and Jackdaw in the area.

The windy conditions continued and rain threatened but held off until we got out of the car at Alton near Poole. We stopped to look for Tundra Bean Geese and was heading in the wrong direction until a nice man on a bicycle corrected us. The Beanies showed very well in the rain, we got a bit of a soaking as we walked back to the car. 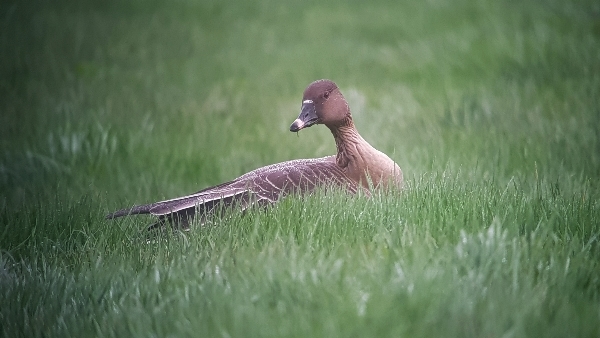 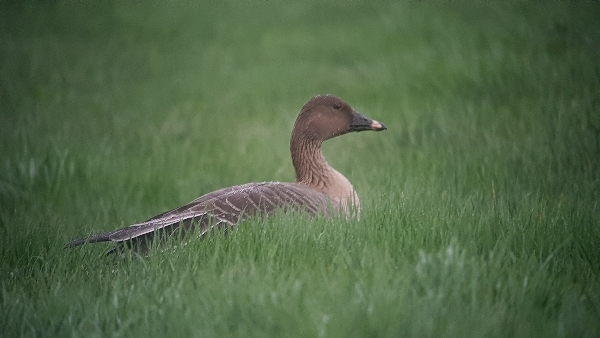 We started to head back westward towards Dorchester, we had a couple of stops planned and the first one was at Crossways Watercress Beds, it was raining as we got out of the car, but we didn’t plan to stay long. We found all of our target birds within a few minutes, Green Sandpiper, Pied and Grey Wagtails and Meadow Pipits, we also saw Cormorants and Woodpigeons and a bonus was the sighting of two Chiffchaffs chasing flies along a sheltered hedge.

The next venue was Silverlake where we hoped to add a few more species of geese and ducks to the list. Guy spotted a Common Buzzard along the way and at the lakes we saw Teal, Gadwall, Coot, Great Crested Grebe, Shoveler, Tufted Duck, Grey Heron, Mute Swan, Pochard and after a lot of searching we found a Goosander. The expected Egyptian Goose did not show and the weather conditions were against a Woodlark showing. We searched another couple of sites for the geese but failed to find any.

From Silverlake we drove to Dorchester and just outside of town we parked next to the water meadows near Charminster. Our target birds were once again geese! We saw 11 Russian White-fronted Geese, a single Barnacle Goose with lots of Canada Geese, Mute Swans, Wigeon, Gadwall, Teal and Shoveler. 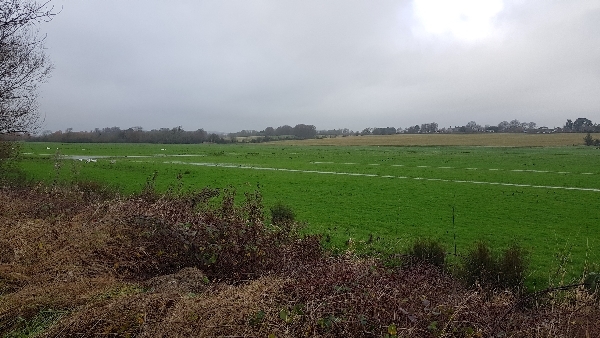 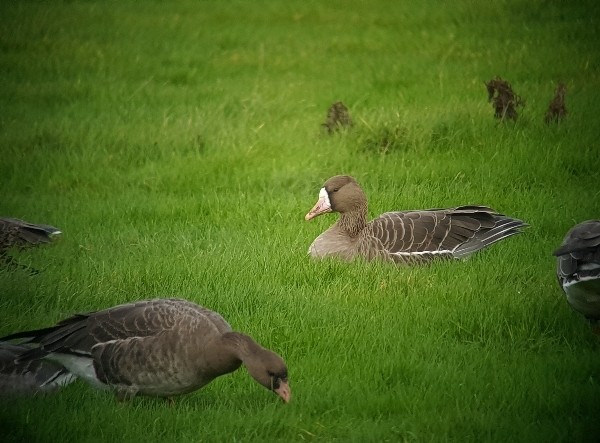 Russian White-fronted Geese, an immature bird without the white face-patch is seen in the foreground

We saw our only Little Egret of the day as we walked back to the car!! After Guy made a couple of wrong turns (dipstick) we arrived at Maiden Castle where a number of target species awaited us. It was 1pm and we only had 60 species on the list, just over half-way house with only 3 hours of daylight left! Guy proved he was clearly a dipstick when he called a Mediterranean Gull sitting in the middle of a sheep field, I scoped it and found it was in fact a LITTLE GULL!! It was an amazing, inland find. To be fair, Guy the dipstick was using bins, the bird was quite distant and he had no other gulls around to compare sizes. 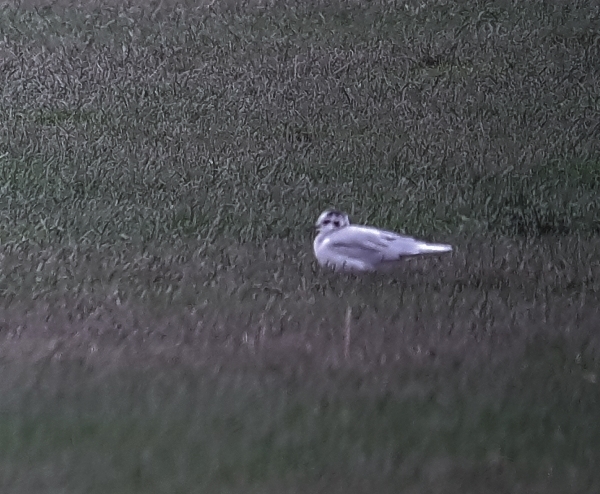 record shot of the adult LITTLE GULL seen at Maiden Castle. The light was too bad for any further pictures after that bird.

We went on to find Skylarks, Linnets, Meadow Pipits and a single Corn Bunting but no Golden Plover. The sky cleared a little bit and the light improved somewhat as we drove down into Weymouth. We viewed Lodmoor from Beachdown Way, Guy found a Marsh Harrier as we got out of the car, our 2nd Harrier species and our 6th bird of prey.

We finally found a House Sparrow, it was 2pm we couldn’t believe that it took so long to see one! Also missing from the list was Dunnock and Wren two of the most common species in Britain! Doh!!

My god, the seafront at Weymouth was heaving with peeps, we found it difficult to park the car. At Bowleaze Cove we searched for a Red-necked Grebe and wished we hadn’t wasted our time. So, we went back to Lodmoor to view the reserve from the west track. We added Common Snipe, Little Grebe, Moorhen, Ruff and a Cetti’s Warbler to the list which was now approaching 80.

We needed 20 species, it was 3pm and we had Portland Harbour, Ferrybridge and Portland Bill to visit, would we fit it all in? 20 Species was doable, but did we have time?

We dashed round to Sandsfoot Castle where we viewed Portland Harbour, we quickly added Great Northern Diver, Shag and Red-breasted Merganser, Guy missed the two Oystercatchers whilst parking the car. We then drove 200 meters to Weymouth Sailing club and scanned the Harbour once more. Guy found a very close Great Northern Diver, then he picked out a single Black-necked Grebe and plenty more Red-breasted Mergansers. We had no sign of Slavonian Grebe or any other waders.

It was getting quite dull now we had 84 species on the list, Ferrybridge was next, we hoped to add seven species there. However, the tide thwarted us once again, it was high and all we saw was a couple of dozen Brent Geese and a single Shelduck, gone was the flocks of Dunlin, Ringed Plover, Bar-tailed Godwits, Turnstones, Redshanks etc.

It was almost dark as we set off at 3:40 to Portland Bill, we parked as near as we could to the Lighthouse and walked down to the Obilisk. Scanning the sea we picked out Gannets, a single Razorbill and a few more Shags, but that was all! On the rocky shore we found a single Rock Pipit, all the rest must have gone to bed!

We drove back up the road and parked at the Bird Observatory, quickly walking to the Obs Quarry to look for a Little Owl, it was not there, a Kestrel was roosting on the rock-wall of the Quarry.

87 species, we were not going to reached our target of 100, but from the entrance to the Bird Observatory we scanned the top fields and found two Short-eared Owls, Guy got one and I got the other. A very fitting end to a lovely day out, I love the competitive element to birding and love the challenge of target list. It was Guy’s first New Year’s Day Dash for 100 species, he loved every minute and I’m sure he will do it again next year.

We failed because of bad planning (not taking the tide times into account), spending too much time on certain species and the weather was against us too, maybe next time! Oh and of course, I was birding with my dipstick mate from Yeovil.