As usual I set out in the dark on January 1st to see how many species I could find on the first day of the year and as usual the weather was atrocious. It was cold and wet as I left the house and as drove down to the coast a thick misty fog shrouded the landscape.

As I got into the car a Robin burst into song and then a Fox ran across the car park, was this a good omen of things to come? I doubted it!

I drove straight down to Weymouth and then onto Portland arriving at Portland Bill Lighthouse at 8:20, it was foggy, raining and still very dull. No change there then! I can recall a very similar picture from several previous New Year’s Days. Along the way I had added Jackdaw, Carrion Crow, Mute Swan (Radipole Lake, Weymouth) and Herring Gull.

The obelisk at Portland Bill

After a few minutes I ventured from the car, the rain had stopped, there was a cold breeze coming from the north-east. I almost trod a Rock Pipit as I approached the Obelisk at the southern tip of Portland. Within a few minutes a had seen Northern Gannet, European Shag, Guillemot, Razorbill, Kittiwake, it looked quite good out there so I took my scope off my back and set it up.

A thirty-minute sea-watch produced two Red-throated Divers, a single Common Scoter and many more of the species already mentioned. I strolled along the ‘cliff’ edge searching for Purple Sandpiper on the rock below me, I found a group of 5 of them, smashing, just what I was hoping for. 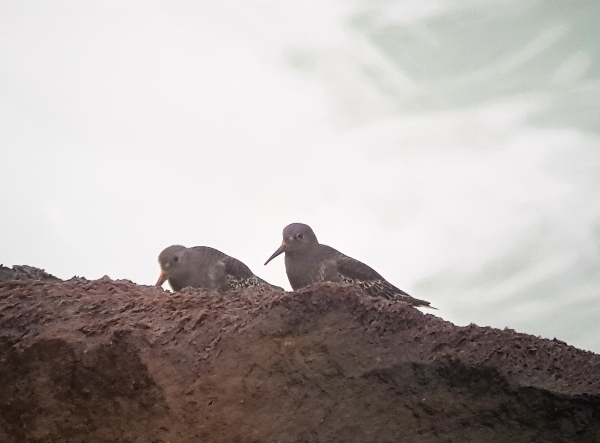 Next, I drove back towards Portland Harbour and stopped at Pennsylvania Castle. In the trees and scrub I found a few more species but not the Firecrest I was hoping for. Blue, Great & Long-tailed Tits, Robin, Wren, blackbird, Wood Pigeon, Magpie and Blackcap (singing in the rain).

My search of Portland Harbour took up the next couple of hours of the morning, the light had improved a little, but not much, at least it stayed dry. From Portland Castle I added Red-breasted Merganser, Great Cormorant, Great Black-backed Gull, Pied Wagtail, Great Northern and Black-throated Divers and Great Crested Grebe.

I stopped at Ferrybridge for a quick look at the Fleet, it was nearing high tide so no waders were feeding on what very little mud was exposed. A single Oystercatcher and three Common Shelducks were added along with Black-headed Gull.

Before I visited the northern shore to the harbour I nipped down to East Fleet to look for three ‘goodies’ that had been around for a couple of weeks. Long-tailed Duck, Slavonian Grebe and Velvet Scoter were on my radar. I saw 5 Long-tailed Ducks, 100+ Brent Geese, a single Slavonian Grebe, lots of Red-breasted Mergansers, two Common Redshanks, a single male Eurasian Wigeon and a field full of herring Gulls. I dipped on the Scoter and a Black Brant Goose. 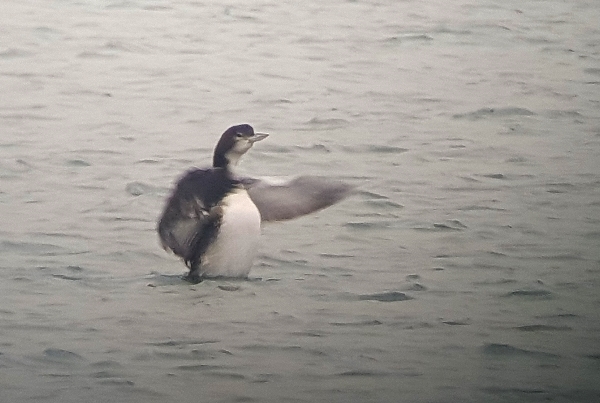 Back at the car I decided to have a short coffee break whilst watching a bird feeder in someone’s garden, I found a Common Chiffchaff in the hedgerow, a few Dunnocks at the feeder and two Collared Doves on the telegraph poles.

Back at the Harbour I viewed the choppy water from Weymouth sailing club ramp, it took a while but I found a small group of Black-necked Grebes. Whilst searching for the Black-necked Grebes I found another Common Scoter, lots of Red-breasted Mergansers and a second Slavonian Grebe. I still hadn’t seen a Mediterranean Gull, there are usually hundreds at Ferrybridge and Portland Harbour.

Next I drove into Weymouth and stopped at Radipole Lake, I had 40 species on my list as it was approaching 11am. I discovered dozens of Med. Gulls on the car park I also added Common and Lesser Black-backed Gulls, Moorhen, Coot, Gadwall, Mallard, Tufted Duck, Eurasian Teal and had I walked a couple of hundred meters onto the reserve I would have seen Bearded Tit, but I didn’t go.

I spent two hours at Lodmoor, I usually spend more time there because it offers many more species than Radipole does. I parked in Weymouth Bay Road and entered the reserve from the northern end back door (because it is nearer the reedbeds, not because it is free parking!!!). I sat and ate my picnic lunch and had a second cup of coffee before I went, it was 12:30 when I set off to walk the entire perimeter of the reserve.

Two Scaup with Pochard (the Scaup 1 male, 1 female are in the front)

At the North Pool I found 3 Greater Scaup they were tucked in close to the reeds with dozens of Common Pochard and Tufted Ducks. I saw two Marsh Harriers (my first birds of prey) a Great Egret and a Grey Heron on the reserve.

The southern track along the seafront produced my highest count of new sightings, Northern Lapwing, Common Snipe, Dunlin and Pied Avocet quickly went on the list. I was then told by another birder that a Garganey was present, wow! I didn’t see that coming. I had seen a male Garganey in Yeovil a few day ago, but this female was unexpected. 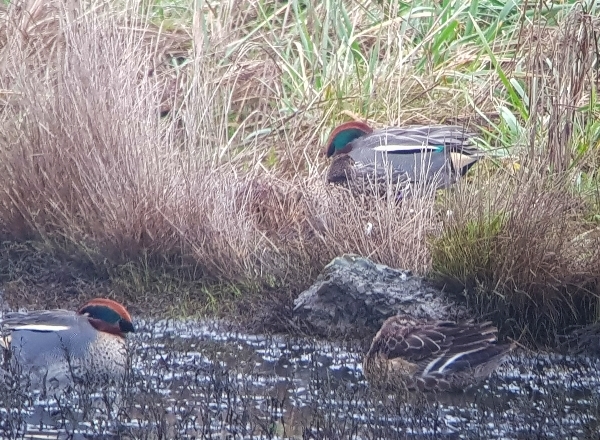 I went on to see Northern Shoveler and Common Kingfisher, before everything went up in the air. I was amazed to see over 100 Common Snipe in the air with the Lapwings. I left Lodmoor at 2:30 and set off for home taking the scenic route. 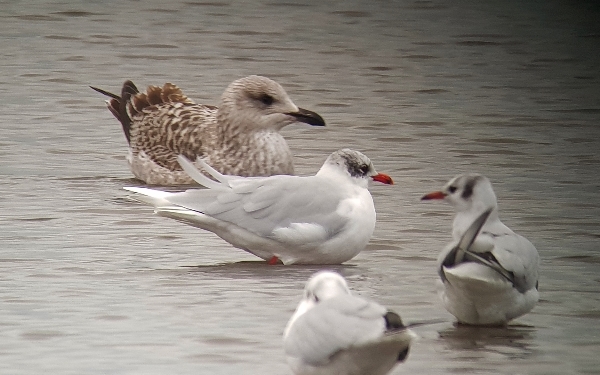 A Mediterranean Gull with juv Herring Gull at the rear and two Black-headed Gull.

At Nottington I saw my first Little Egret of the year and also Common Pheasant, Mistle Thrush and a Common Kestrel. From then on the weather really turned bad, thick fog and rain followed me nearly all the way home.

At home there wasn’t any fog or rain? I watched my feeder and scanned the meadow for a while and added my last 4 species of the day. Coal Tit, Redwing, Common Buzzard and Great Spotted Woodpecker. It was 4pm, I was finished for the day,  I now have 75 species on my year list!