NINE DAYS IN SOMERSET WITH JOHN AND MARY

We spent just over a week back in the UK with our very good friends from Pennsylvania, USA, John and Mary. They were keen to see some cultural sites, the beauty of Somerset, Dorset and Devon as well as some good bird sightings - we tried our best on all counts.....................

A late afternoon arrival meant that there was not much time to do much. After our guests settled in we walked along local tracks in Stoford with our binoculars at the ready. We saw Common Buzzard, Blackcap, Robin, Chaffinch, Goldfinch and a Green Woodpecker before the rain drove us to seek the shelter of our home. John missed the Green Woodpecker, he really wants to see another.

It was a little less overcast this morning, the sun broke through occasionally, John and I watched Buzzards from our garden and a couple of Ravens flew over.

The morning was spent driving to Dorchester, along the way we stopped to look at the Cerne Abbas Giant. At Dorchester we visited, MAX GATE, the home of THOMAS HARDY. It was very interesting and it was made even more so for Dawn and I as both John and Mary are literary academics, both were professors of English Literature, lecturing and teaching in American Universities before retirement. They know more of the history and content of English Literature than most Brits, including us! 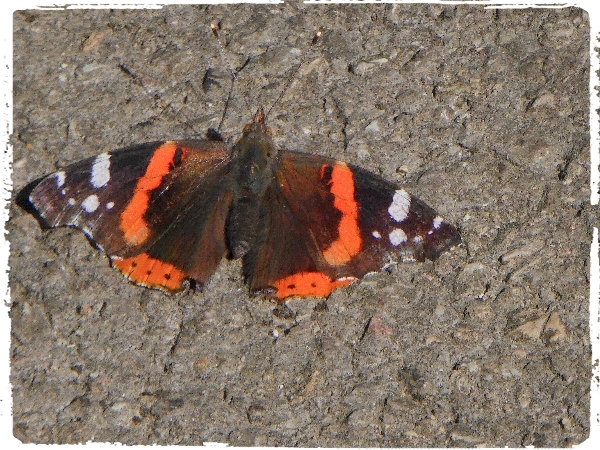 From Max Gate we drove to SAINT NICHOLAS CHURCH, MORTON, a small parish church with some famous people buried in the cemetery and adorned with the most beautiful clear glass-etched windows, by Sir Laurence Whistler. The glass windows are stunning and depict scenes from WWII as well as butterflies and scenic countryside.

Bizarrely and grotesquely, the heart of THOMAS HARDY is buried at MORTON, his body is interned in WESTMINSTER ABBEY! But another more interesting and famous character is buried in MORTON CEMETERY, and that is T. E. LAWRENCE (Lawrence of Arabia). He lived at ‘Clouds Hill’ and was killed nearby whilst riding his motorbike.

After a superb lunch in the Morton Tea-room we drove to Weymouth and spent the rest of the day walking around the Harbour and Nothe Castle. Our journey back was via Portesham found westward along the coast and then up over the hills to Dorchester. We visited Hardy’s Monument, that is Vice-Admiral Thomas Masterman Hardy the man who nursed Admiral Nelson as he lay dying at Trafalgar, and where the immortal words “kiss me Hardy” were issued.

At last some birding! John and Mary are both quite keen to get out in the countryside and to look at birds as well as landscapes. The Somerset Levels provide both scenic landscapes and plenty of birds, we drove to Ham Wall to walk along the central track looking for our main target species the Hobby. Some great species were on show including GREAT BITTERN (one flew right over the track very close to us and another was seen later in the marsh), Great Egret, Glossy Ibis, Water Rail (heard), Marsh Harrier and lots of common ducks. We also saw Chiffchaff, Blackcap, Garden Warbler, Common Whitethroat, Sedge and Reed Warbler, Reed Bunting and Bullfinch.

Many dragonflies were on the wing, Four-Spot Chaser, Black-tailed Chaser and Southern Hawker to name a few.

We ate lunch at the Shapwick visitors centre before we drove up to 7-acre lake where we hoped to see Hobby. We got our target bird straight away, two were on the wing but they soon disappeared, however as we were leaving another 3 birds came into view so we stayed to watch them as they hawked dragonflies over the water, marvellous.

For the rest of the afternoon we quit birding and drove into Glastonbury where we spent a couple of hours visiting the Museum and Ruins of the Abbey, we a cream tea and a walk around the town.

Back at our home we watched both Green and Great Spotted Woodpeckers from the garden and the usual Buzzards.

Today we went to the coast, it was 10am before we set off, the weather was dull and overcast and it was foggy at Lyme Regis when we got there. Despite the bad weather we had a great time fossil hunting, walking along the ‘cobb’ and enjoying a lovely meal in one of the pubs, we all ate fish and chips.
We saw a flock of Common Shelduck, Great Cormorant, European Shag, Herring and Lesser Black-backed Gulls and several Rock Pipits fed in little mariner.

We then walked around the town and took a different way home travelling through Bridport and onto Crewkerne.

The weather improved and it ended quite bright when we got home, John sat on our garden bench searching the meadow and nearby trees for the Green Woodpecker.

We had a late start setting off at 10am heading for Bath, we never made it there until 3pm! Thiscwas because I had drop something off at my friend Richard’s house in Bradford-Upon-Avon, of course John and Mary fell in love with the place so we spent 3 extra hours there. We visited the Saxon Church, walked along the River and saw Kingfisher, Grey Wagtail and a surprising Common Sandpiper.

Our walk around Bath was just that, a walk, we never visited the cathedral or Spa or the river, just walked by them.

Today was Mary’s Birthday, we sang to her at breakfast and gave her cards and gifts before driving down to the coast to meet some other friends at Beer in Devon. We planned a 3 hour walk along the Devon coast path before all 8 of us sat down to yet another pub lunch, but this was Mary’s and Fred’s joint birthday lunch.

After lunch we loafed on the pebble beach, skimming stones and dozing off to sleep, it was a beautiful day full of sunshine, a great day out with great company.

John bought a huge birthday cake on the way home, we lit the candles, open up a bottle of Cava and celebrated Mary’s birthday for the 3rd time.

We stayed local today in fact we didn’t venture more than 5 miles from the house! John. Mary and me walked across the fields to East Coker because John is a great fan of T.S. Eliot the great American poet and we discovered that his ashes (Eliot’s not John’s) are buried in the local parish church.

Our walk across cow pastures led us to North Coker which according to the locals does not exist, nor is it shown on the map? We finally found East Coker Church which was locked shut (or so we thought), we knocked on a few doors and failed to see anyone until a nice lady, who was gardening, told us to use a little more force on the church door handle because it wasn’t locked.

We got in! John was over the moon, so much so that he took us to a local tea room and bought us Cream-Teas, how nice.

We watched Common Buzzards on the way back and a several Comma Butterflies were on the wing. We got home at 4pm and with Dawn we drove to her sister’s house for dinner and football!

We were definitely flagging, we only got as far as Sherborne today and it was lunchtime when we got there. John and Mary treated Dawn and I to a wonderful lunch before we took a guided tour of Sherborne Abbey. A walk around the town was followed by a little retail therapy for the girls.

Our guests were leaving today! But not until the afternoon, they were flying to Spain from Bristol Airport at 5pm. So after a leisurely breakfast we set for Chew Valley Lake for a spot of birding before driving onto the airport.

It was cloudy and a little windy at Herriot’s Bridge but a nice selections of ducks, geese, swans and grebes were milling about. Eurasian Teal, Gadwall, Tufted Duck, Northern Shoveler, Common Shelduck and Great Crested Grebe were the most noteworthy.

We drove round to the main visitor’s centre and restaurant where John and Mary sampled Fish and chips for the last time during this visit, I’m sure that we all gained a few pounds during the last 9 days. A short walk after lunch wound up our visit to the lake.

We dropped our guests at the departure terminal and said our farewells, it won’t be long before we meet again as John and Mary have a property in Gaucin, Spain which is our destination in 3 days time!