WEATHER: dull and overcast all day with strong winds. Very cold to start with (2C) but a little warmer later.

Our first full day in Norfolk started with a beautiful sunrise, lovely colours and as we drove out of the village of Brancaster Staithe we saw huge skeins of Pink-footed Geese flying across an orange sky, it was magical. 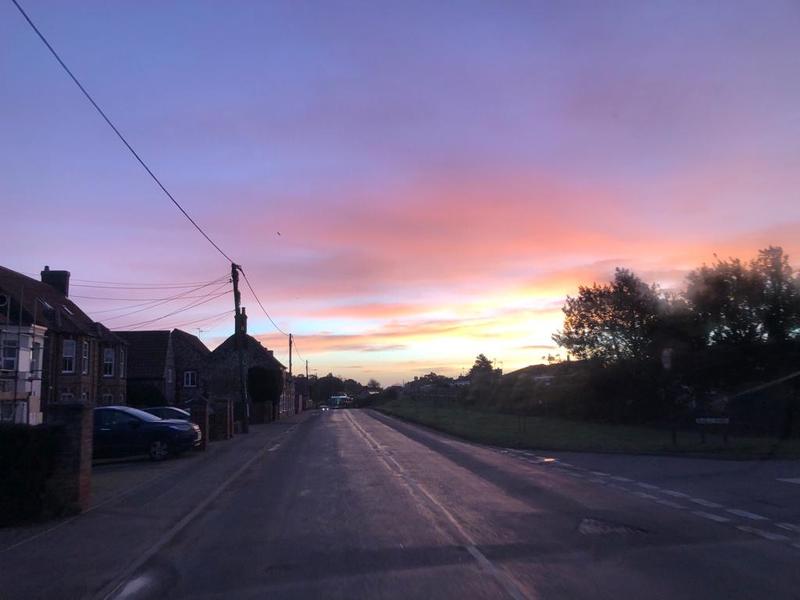 Our first stop was an impromptu one just outside of Burnham Overy at the Millstream because we saw a Barn Owl quartering a field. We watched the Owl for a while, well pleased with our first new bird of the trip for today.

Parking the vehicle at Lady Ann’s Drive we scanned the Fresh marsh looking for White-fronted Geese without luck but we did find lots of Pink-footed Geese with Greylag & Canada Geese and lots of Wigeon, Teal, Common Shelduck, Curlew, Redshank and countless Gulls milling about. Nigel found a flock of grounded Golden Plover.

As we walked through the belt of pine trees we noted Coal Tits and we heard a Goldcrest. Out on the marsh at Holkham Gap we scanned the marsh for Shore Larks and found Skylarks, Sanderling, Shelduck, Brent Geese, Egyptian Geese, a few Meadow Pipits and not a lot else. We walked around an area fenced-off especially for the Shore Larks, they obviously do not read the signs because they were not there.

Near the beach area we saw a flock of 30-40 Snow Buntings in the distance they appeared to drop down onto the beach but by the time we walked over there they had moved on. Speaking to other birders we were told that the Shore Larks were more often that not seen near to Burnham Overy.

We gave up and returned to the car and continued with our plan to visit Cley Reserve, not long after we had we left Wells we stopped and turned down a track which led us to two large pools. A good selection of birds were seen there, we flushed two Grey Partridges as we got out of the bus.

On the lakes we saw the usual ducks and a large mixed flock of gulls containing Black-headed Gulls, Common Gulls and a single adult winter-plumage Mediterranean Gull.

We arrived at Cley and parked at the beach, we hoped to find an Iceland Gull along the beach and maybe get a view of the RED-BREASTED GOOSE that had been seen recently on the reserve. Scoping the beach area and out to sea we saw several Red-throated Divers, most of them flew past but one or two dropped onto the sea quite close in. 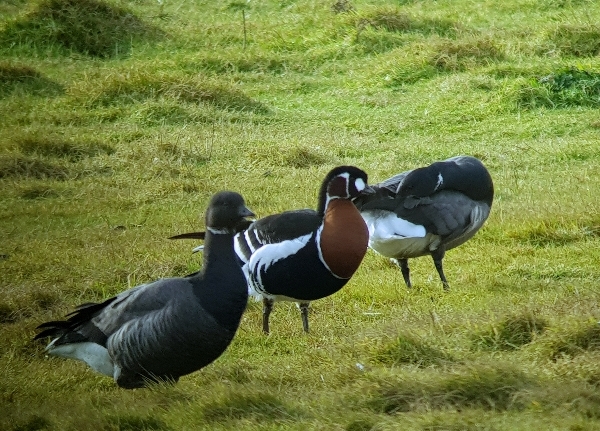 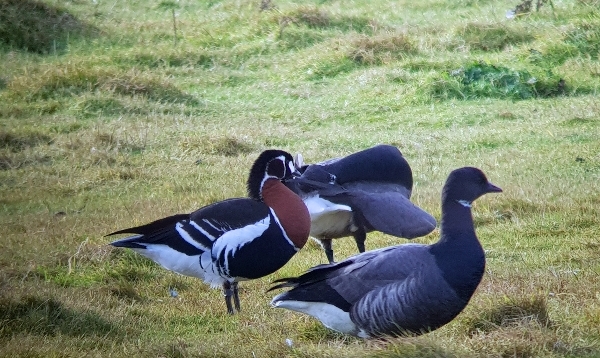 Over the next hour we added Northern Gannet, Kittiwake, Common Scoter and a couple of Auks (probably Razorbills). Then a large flock of Brent Geese dropped onto Cley Marsh just behind us and with them was the Red-breasted Goose!! What a superb bird, such colour, it was a UK tick or lifer for all of the group. After another search for the Iceland Gull we had a quick cuppa before driving off the reserve and after a very quick stop at Salthouse Marsh we headed back to Wells. 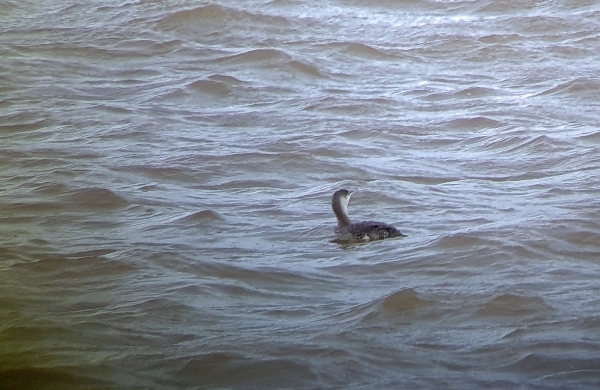 Red-throated Diver  off the beach at Cley

Parking at the main car park near Wells Wood we climbed upon the bank and walked along the very busy footpath towards Wells. It was sheltered from the wind below the embankment and we enjoyed good views of a large number of waders during this low tide period. Curlew, Redshank, Greenshank, Turnstone, Dunlin, Sanderling, Ringed Plover, Oystercatcher, Bar-tailed Godwits and lots Shelduck, Brent Geese and Little Egrets. 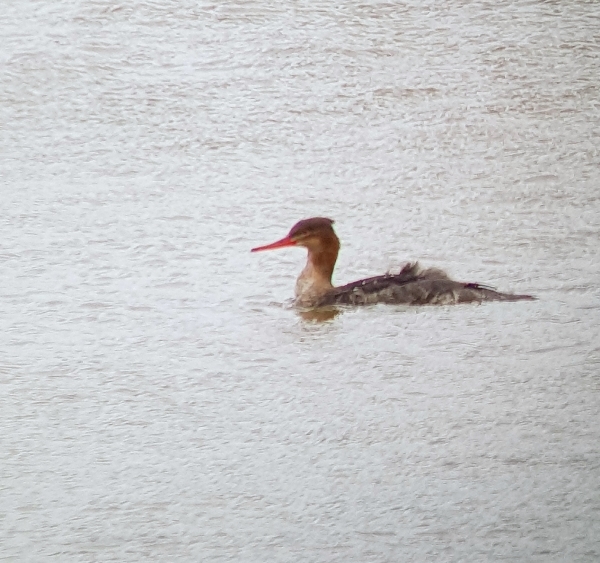 A Great Northern Diver had been seen earlier and we found out we were heading in the wrong direction to see it!! After an about-turn we finally found the diver almost at the mouth of the East Fleet River! We also added Red-breasted Merganser, Red Knot, Great Crested Grebe and a Black-tailed Godwit. 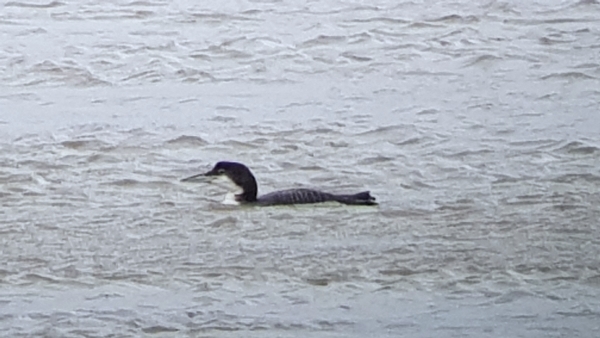 The Great Northern Diver in the River East Fleet.

As we drove back towards town I saw a flock of Brent Geese on the football pitch and noticed a Black Brant in with them. I stopped the bus and everyone eventually got to see it, nice one!

After an aborted effort to walk out on the marsh at Burnham Overy (the wind was really too strong, and a local birder warned us that our target species, Shore Lark and Snow Buntings were a very long-shot because of the conditions, so we backed off. 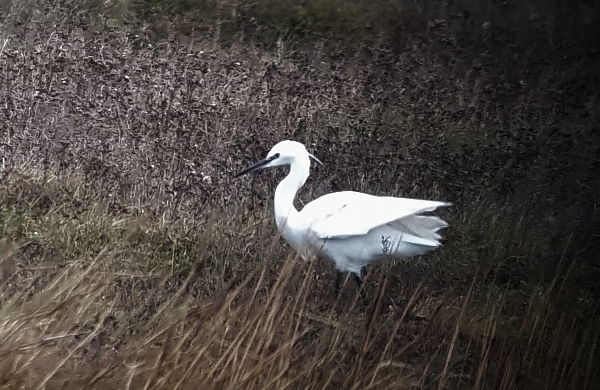 Our final destination was the Saltmarsh at Stiffkey, where a well known ‘Harrier Roost’ was found. We arrived at 4pm and scanned the marshes for almost an hour, until it was too dark to see anything. We had very distant views of a perched Merlin and an even more distant views of a Ring-tailed Harrier.

We enjoyed the passage of large flocks of Brent Geese and all the usual marsh birds before we returned to our accommodation in Brancaster Staithe.