Would you believe it? After all that atrocious windy, wet weather we had a beautiful still, crisp and clear day just as we were leaving!!

We had the bus all loaded up with our luggage and ourselves by 7:20am, amazingly organised! We set off for our all-day adventure to the Scottish Highlands where were will be staying for the next four nights in Grantown-on-Spey. We expected to spend 8-10 hours getting there with coffee stops and birding along the way.

We drove just 15 miles before we stopped at a small privately owned Nature Reserve near Flitcham, Mervyn and Leesa had seen Little Owl during their last visit there. A small hide overlooks a water meadow with a pool and lots of scrub and ancient oak trees. We searched the oaks for the Little Owl but unfortunately it did not appear today, other birds present included: Mallard, Teal, Coot, Canada Geese and lots of Hares. 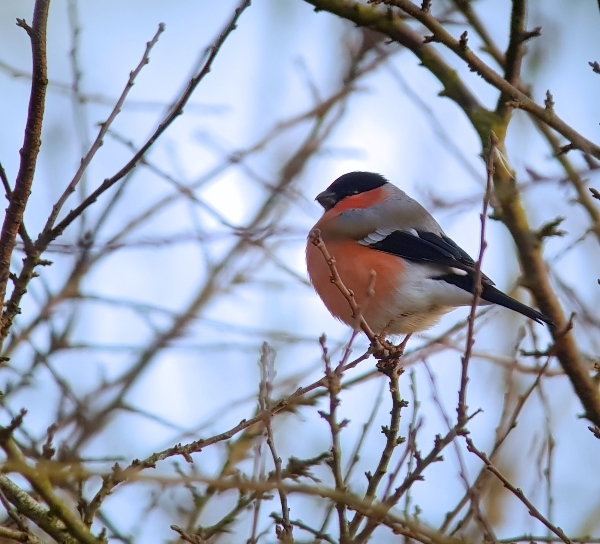 The amazing Bullfinch, a well loved species by all birders

In the bushes next to the hide we saw Bullfinches, Blue and Great Tit and lots of Wood Pigeons. Out on the lane we could see into a stubble field where many finches were feeding, we saw Chaffinch, Goldfinch and Mervyn saw a Brambling. There was no sign of any Tree Sparrow which are found in this area, but to be fair we only gave it a few minutes before we moved on.

We then spent two hours driving north, we dropped into Doncaster to collect our last two members of the group, Mike and Lorna Taylor joined us at 10:30am at Doncaster Railway Station. We then spent 5 hours (with a couple of coffee stops) to get to Musselburgh in the south-eastern corner of Edinburgh.

A Surf Scoter, Common & Velvet Scoters and a Black-winged Scoter had all been reported in the estuary of the River Esk in recent times. So we parked up as close as we could and walked 300 meters to scan the river mouth. It was low tide and hundreds of birds were on the exposed mud and shingle banks, many birds were feeding in the water. A good number of Goldeneye were fishing in the rapids of the fast flowing river, Wigeon, Teal & Mallards were also present with countless Oystercatchers, some Curlews, Redshanks, Turnstones and hundreds of Black-headed, Herring and Common Gulls. 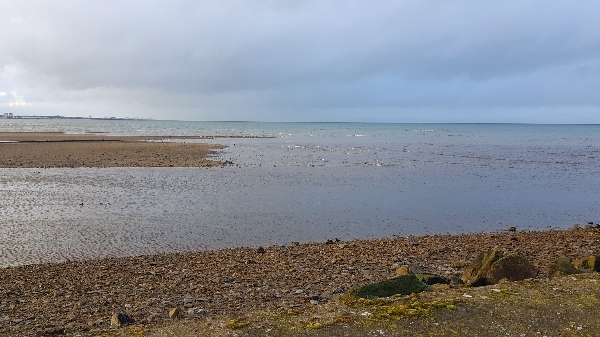 the mouth of the River Esk at Musselburgh

After a few minutes searching we found a group of Scoters out on the water but they were really far off!! Just dots in the scope, we managed to identify the Surf Scoter with its obvious colourful face and white patch on its nape, but the others just looked like Common Scoter, none had white-wing patches or bright orange bills. It was disappointing, so we vowed to return on the way back home. We also picked out a few Eider Ducks and a single drake Long-tailed Duck, again these birds were very distant. 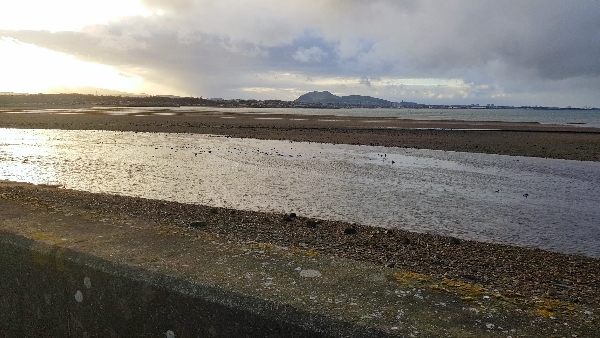 another view of the river

Nearby in Hollyrood Park an American Ring-billed Gull had been a regular visitor to the large pool there, but, looking at the time (approaching 4pm) and the traffic we decided to miss that out, and a good job we did too.

The traffic on the Edinburgh by-pass was horrendous, we moved along at a snail’s pace it seemed to take forever to get to the Queensbury Suspension Bridge Crossing, we still had 120 + miles to go! As it got dark it started to rain which made driving conditions so much worse, it was a long hard slog.

We arrived at our hotel in Grantown-on-Spey at 7:30pm (12 hours after we had left Norfolk!!). After a quick depositing of luggage etc we sat down to eat at 8pm. A nice relaxing beer was called for, we were all tired and ready for an early night.