Our birding fortunes were a lot like the weather conditions, we had highs and lows and some surprises. Our day started at 8am, it was snowing as we left the hotel and a very cold wind was hurtling along the street, the snow was freezing to the minibus windows!! Soon it blew over and things calmed right down and the sky cleared for a while.

The first place we visited was the pine forest behind the Community Centre in the middle of Boat-of-Garten, we had been told that several Crested Tits had been visiting the feeders in the forest and we hoped to see one or two of them. The first feeder, found immediately behind the Community Centre, was attracting only Coal and Great Tits and a single Chaffinch so we moved on to the feeder positioned in the forest. 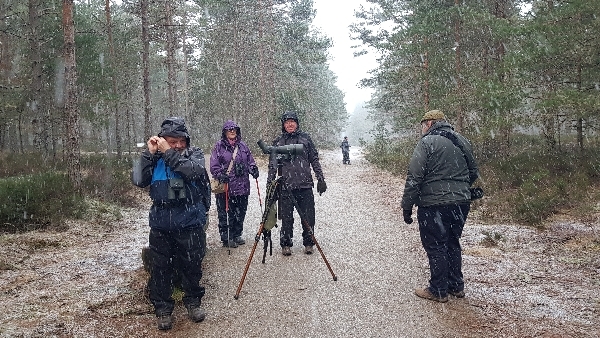 are we mad? Standing in a snow shower waiting for a Crested Tit to show

A walk of 300 meters along a wide forest track led us to the feeder, it was busy with at least 8 Coal Tits, Great & Blue Tits also made an appearance. The birds seemed to visit in waves with nothing in between perhaps they were doing the rounds of the feeders?

It started to snow, big flakes fell in abundance but it stopped soon after and we concentrated on the birds at the feeder. Before too long a Crested Tit appeared, it stayed around for a short time and left with a peanut, not long after, it or another bird turned up. We had one more sighting before we left, well pleased with one nof our most wanted species in the 'can'. 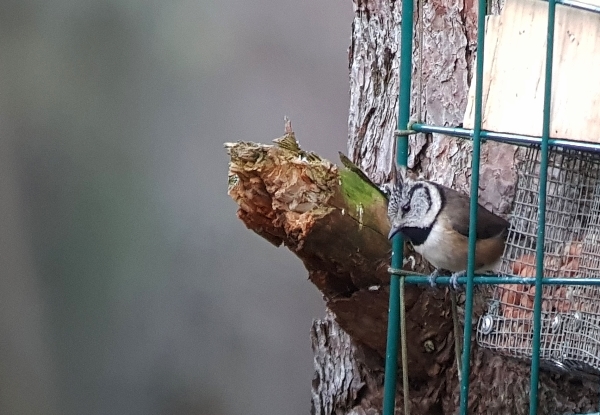 finally we got our Crested Tit

From Boat-of-Garten we drove the short distance to Nethy Bridge to look for a number of species especially Dipper on the River. We failed to see a Dipper but we got one species that we did not expect to see today!

We parked near the bridge over the River Spey and searched for Dipper, looking both up and downstream without luck. From the bridge you could see into a garden with some very active feeders. There was dozens of Siskins, lots of Chaffinches and plenty of Bramblings, we had good close views of them all.

From the bridge we took a drive along a lane to view some stubble fields where a flock of Twite/Linnets had been reported, we found the flock and identified only Linnets. We also saw Mistle Thrush, Lapwings, lots of corvids and not much else. 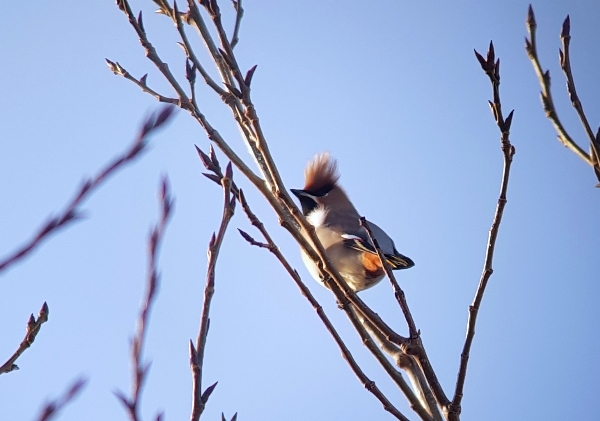 We made one last attempt at seeing the Dipper and whilst on the bridge a birder stopped in his car and told us he had just seen 4 WAXWINGS just around the corner. He led us to them, shazam! Thanks very much matey! We watched the Waxwings high up in a tree and eventually found where they were feeding, they came down a couple of times to a bush with red berries for very brief spells but flew off never to be seen again. A few Skeins of Pink-footed Geese flew over us just before we left. 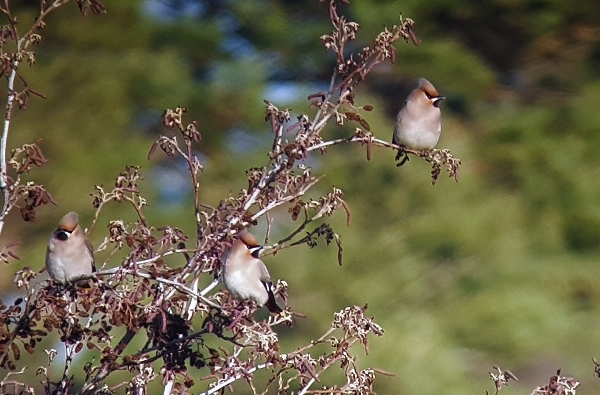 three of the four Waxwings we saw at Nethy Bridge

From our high of the Waxwing sighting it went downhill from there we decided to visit Lossiemouth where at least one Glaucous Gull, if not two, had been seen in the last few days. We arrived just after lunchtime, so the first thing we did was eat our picnic supplies and had a quick cuppa coffee.

We scanned the gull roost along the tidal approach of the river, it was a rising-tide and more gulls were arriving all the time. About two thousand gulls were present and not one of them was a Glaucous Gull! Other birds present included: Oystercatcher, Sanderling, Curlew, hundreds of Wigeon, Teal, Mallard and Grey Heron. 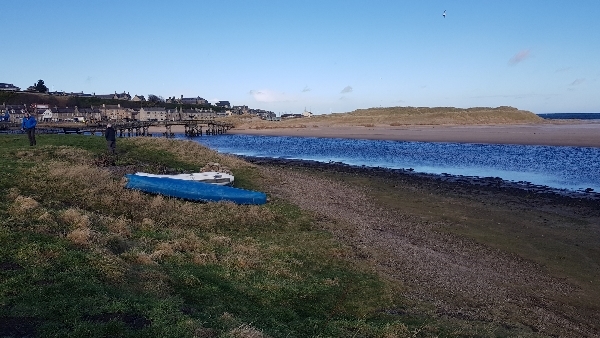 The Lossie River at Lossiemouth

Driving into town we stopped at two areas overlooking the small harbour, in the first docking area we found a beautiful male Eider and that was all. From a vantage point on the east side of the long beach we scoped the bay for about 30 minutes. Lots of birds were out there we saw many Eiders, Common Scoter, Razorbill, Red-throated Diver, Red-breasted Mergansers, Long-tailed Ducks, Cormorants and Shags. A Single Purple Sandpiper flew in and landed on the rocks nearby and several parties of Sanderling flew past us. 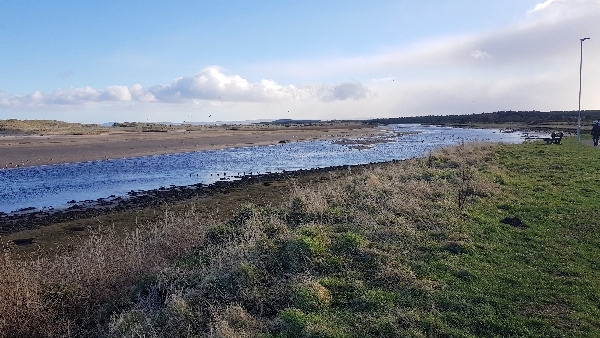 the river mouth where a couple of thousand gulls were roosting

We made a second attempt at scanning the gull roost along the mouth of the River Lossie, even more gulls had arrived but after another hour we could not see a Glaucous Gull, so at 2pm we decided to give up and go birding at Findhorn Bay.

We arrived at the hide along the east side of the bay, we had lost the sunshine, it started to rain and the wind had picked up, it was in our faces. Scanning the very distant birds along the edge of the bay we saw hundreds of Pintails, Common Shelducks, Oystercatchers, Curlews, Redshanks and most of the other species were too far away to identify. 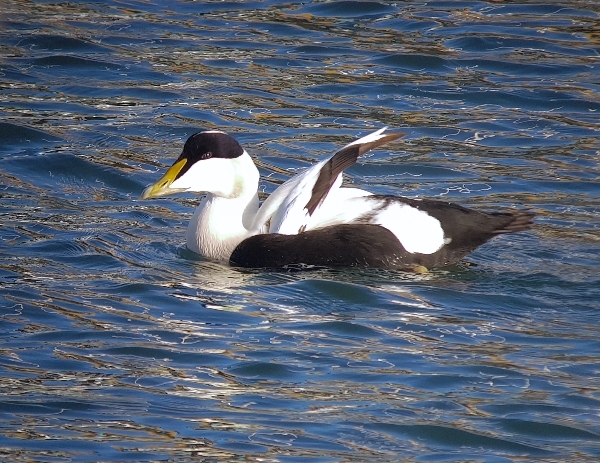 its not often that you can get a Common Eider to wave to you!

Our last birding of the day was just east of Findhorn, we stood by some beach huts for shelter and scanned the sea. Not many birds were out there but those that we saw included: Razorbill, Guillemot, Red-throated and our first Black-throated Diver, Eider Ducks, Common Scoter, Red-breasted Mergansers and Shags. On the beach about a mile away we saw a few hundred Common Seals hauled up on the sand.

On the way back to Grantown-on-Spey we drove through rain, sleet and snow showers and later in the evening a heavy fall of snow fell over the town. It may be difficult to get out tomorrow!!