A heavy fall fog snow overnight left us doubtful that we were even going out birding, but by the time we finished breakfast the snow had ceased and the roads seemed driveable.

We still wanted to see Red Grouse and the nearest place to find them is Dava Moor just afew miles up the road. We parked in a small lay-by and scanned the moor from our raised position. A biting wind chilled us to the bone and any exposed fingers were quickly frozen. After about ten minutes and just before we were about to move on, Nigel slammed a door on the bus and two Red Grouse flew up from the heather very close to the road! Ha, ha, well done Nigel. 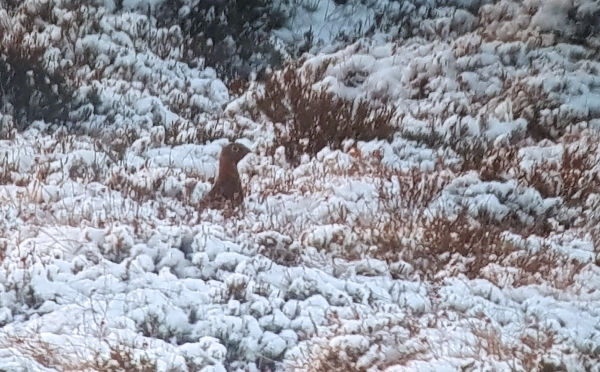 The Grouse landed not too far away and one of them keep looking up from the cover of the snow covered heather, we all got to see it. Wanting a better view we searched from a couple of other places, including the 'closed' road to Lochindorb. The strong wind didn't help our cause so we gave up and a short while, but the scenery was stunning out there it was worth getting out of bed for! 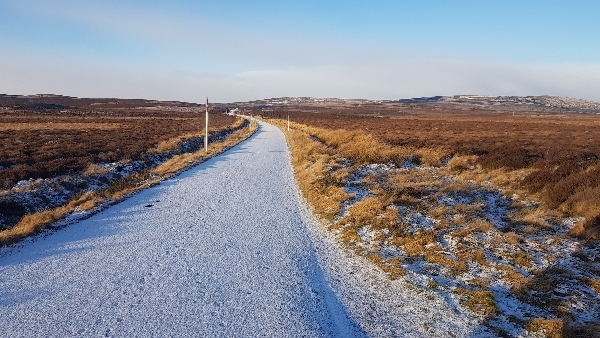 From Dava Moor we drove to Carrbridge just 20 minutes away, our plan was to visit a raptor watch-point which was situated some 3 miles along a narrow lane. After a mile or so we had to give up because the snow was too thick on this used track. We spent a little time looking for a Dipper on the River Dulnain beneath the famous Stone Bridge, we didn't see a single bird in the area. 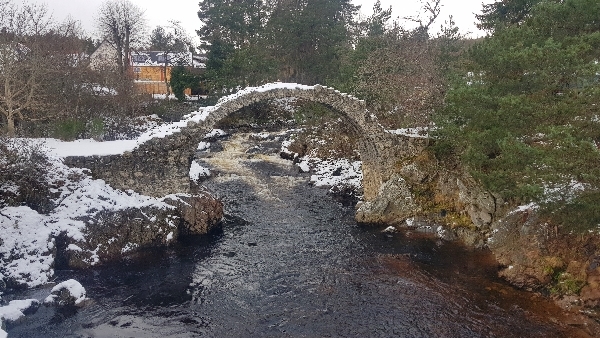 Our plan for the rest of the day was to get out of the highlands, away from the snow so that we had a chance of seeing some birds. We decided on visiting the Black 'Isle' about 45 minutes north of where we were. Once on the 'Isle' we completed a circular circiut in an anti-clockwise direction stopping at several places. 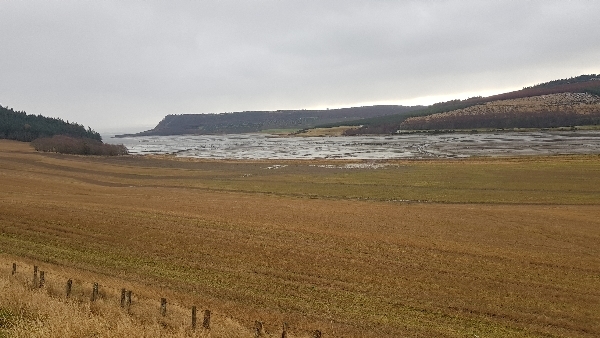 Munlochy Bay from the roadside hide

I must say that it would have been a lovely visit if it wasn't for the high winds, snow and rain spoiling all of our birding sessions. We saw many Pink-footed and Greylag Geese in the fields and our first stop overlooked Munlochy Bay. The tide was out so the birds were a long way off, we used the shelter of a roadside hide, from which we saw Shelduck, Curlew, Carrion and Hooded Crows and a single Pink-footed Goose. We saw Grey Heron along the way and Mervyn found a small Grebe but we could not stop to scope it, we thought that maybe it was a Slavonian Grebe? 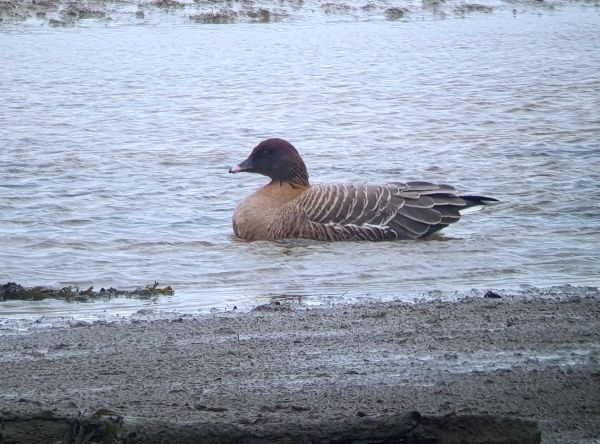 Pink-footed Goose on the RSPB Reserve at Udale

We by-passed Chanory Point because of the windy conditions and drove down into Cromarty Village. We scanned the inlet to Cromarty Firth and found very little. A few Shags, Common Eider Ducks, Red-breasted Merganser, Oystercatchers and Sanderling was all we saw. Driving along the southern shoreline of the Firth we stopped at Jemimaville, but got blown away and wet,  we then reached the very nice hide at the RSPB Reserve of Udale. 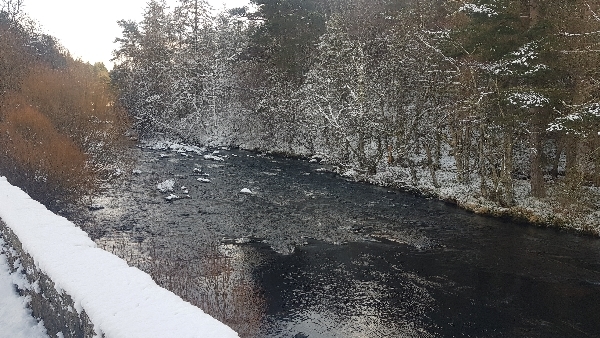 the River Dulnain near Carrbridge

In the shelter of the excellent hide we ate our picnic lunch and scoped the mudflats which were teaming with bird-life. Most birds we far off because it was tide but we could see the potential of the site and imagined how good it would be during high tide.

Our final destination in the area was the RSPB site, Tollie Red KIte Centre where we timed our arrival with the regular feeding session of the Kites. We arrived a little after 1pm and just in time to see 8 of these majestic birds come down and take scraps of food from atable set out near the visitor's centre. Kites do not land to take the food but grap it in their talons as they swoop down from on high. 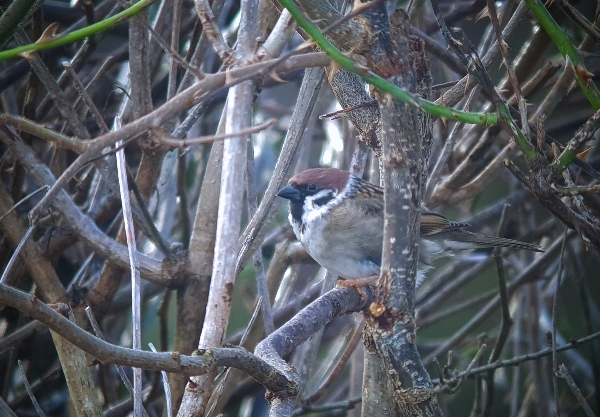 Two volunteer members of staff stay out in the field to deter a hoard of gulls that gather at feeding time. The warden eplained that up to 20 of the released Red Kites were poisoned by a farmer in recent times as he tried to eradicate Crows from his land!!

The feeders in the grounds of the Centre were an attraction for us and one of the main reasons for our visit was to see Tree Sparrows. It took us a while, but with Mervyn on the case we soon got sightings of them. Other birds joining them on or around the feeders were: Yellowhammer, Chaffinch, Robin, Blue, Great Long-tailed & Coal Tits and Dunnocks.

We left after an hour or so and headed back into the highlands, we thought (wrongly) that a second visit to the Raptior Watch-Point at Carrbridge might be productive. Some 40 minutes later we arrived at the lane annd Discovered that the  road was now clear of snow. so we drive the 3 miles along this narrow winding lane to the car park. 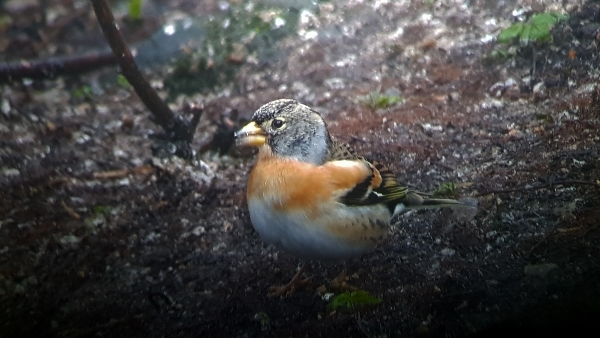 Well, you couldn't see the mountains around us because of the low cloud, the high winds and the driven sleet, let alone seeing a raptor drifting slowly across the sky. We abandoned immdeiately and drove back into town and onto Nethy Bridge for our final shot at seeing a Dipper.

This time we were very successful and had excellent views of this enigmatic little water bird, we also watched the feeders below the bridge and saw Brambling, Chaffinch, Blue, Great and Caol Tits, Goldcrest, Blackbird and Collared Doves. 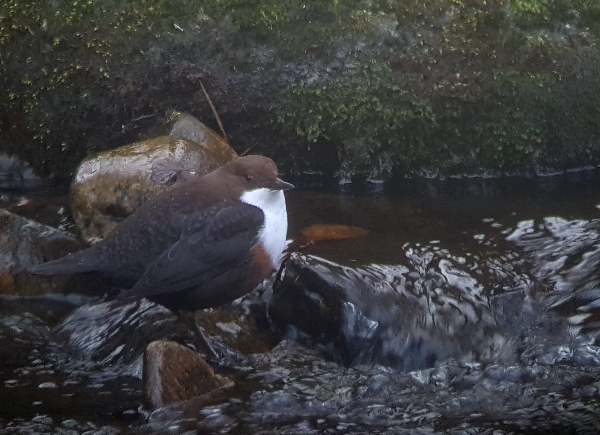 finally we saw a Dipper, Guy spotted it first 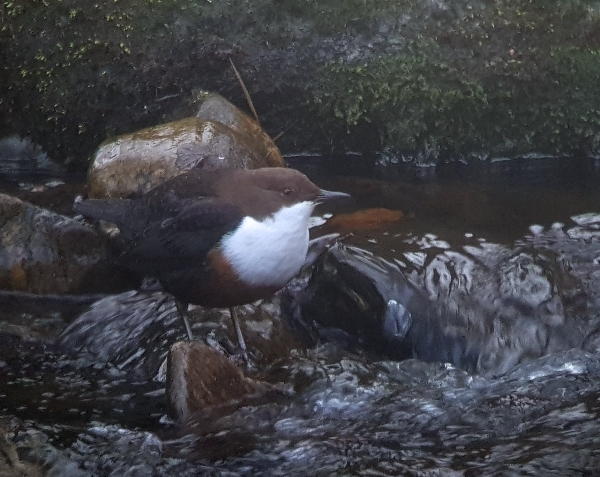 That was our final birding of the day, we drove back to Grantown-on-Spey for an early finish, It was 5pm when we finally got back to our rooms.