WEATHER:  a bright but very cold start to the day, cloudy later, a cold wind all day.

At 7am we drove the short distance to Thornham Quay and spent nearly an hour watching the marshes and meadows from the car park. The whole area was alive with birds and despite the fact that the usual flock of wintering Twite would have long gone I did get a slight jerk of excitement everytime a small flock of Linnets landed nearby. We saw many geese and waders. Curlews, Black-tailed Godwits and Redshank fed very close to us and we scoped Red-breasted Mergansers in the bay. 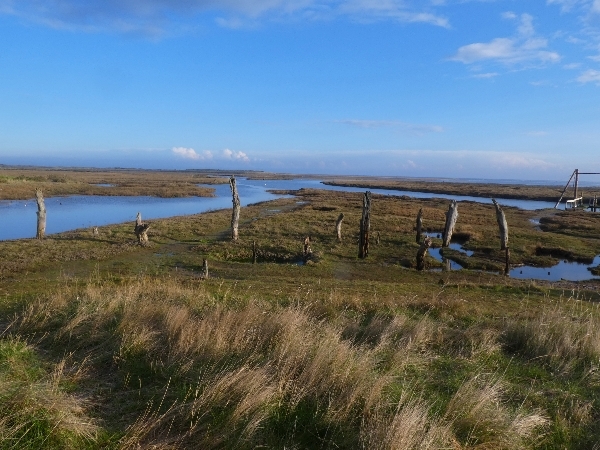 looking out to sea at Thornham

Distant Marsh Harriers came up out of the marsh and one brief peice of excitement ocurred when a Hen Harrier flew up and headed towards us, unfortunately the bird turned 360 degrees and headed away before it got very close. Looking from a dyke over the marsh, Doreen, found a Barn Owl quartring the marshes and quickly drew our attention to it, we all had excellent views of it before it flew into a wood to roost.  One bizarre sighting was that of a group of a dozen or so Common Shelducks sitting on the roof of a barn on the edge of the marsh, they looked like homing Pigeons! 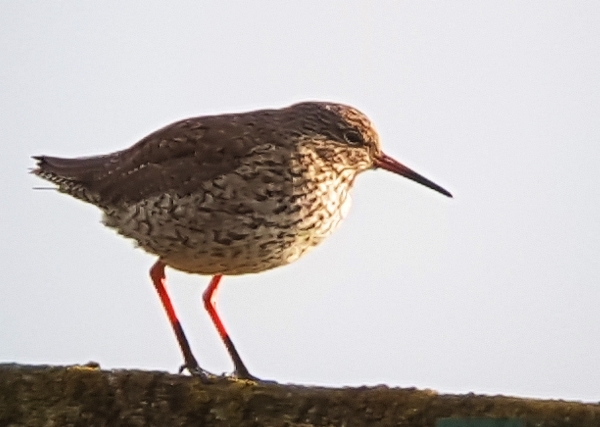 After breakfast we drove into Hunstanton and parked by the impressive and beautiful cliffs, we walked down to the beach and started 'combing' the shoreline on a receding tide looking for a single Purple Sandpiper that had been reported yesterday. Many Oystercatchers and Ruddy Turnstones covered the rocks as they emerged when the tide relinquished them from the watery depths.  The Purple Sandpiper never appeared. We aslo found a single Bar-tailed Godwit, a few European Shags, lots of Redshanks, Curlews and many gulls. 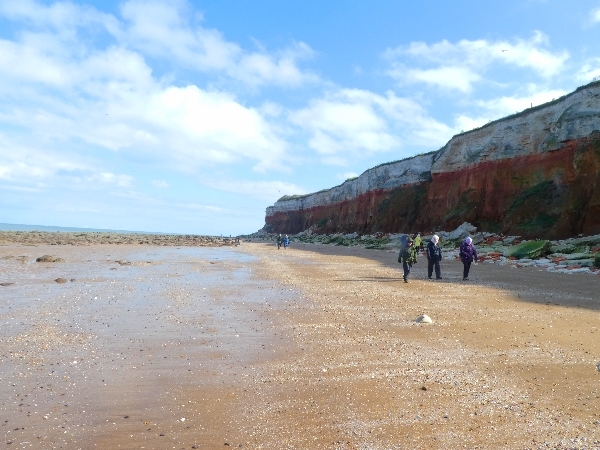 Our main reason for visiting the cliffs was the nesting colony of Fulmars, there are now 92 pairs in this thriving colony and you can view them quite easily from the beach. The Fulmars were pairing up and settling onto small ledges where they had built their nests, a wonderful but noisy sight. 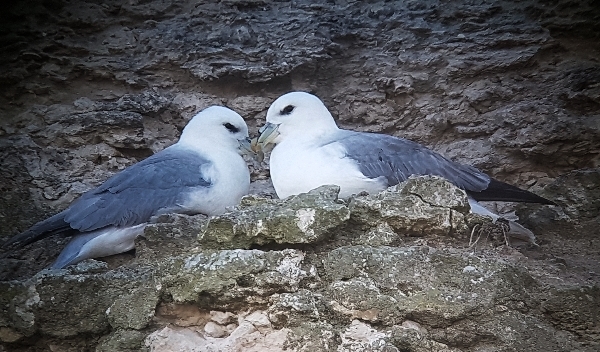 We popped into a local store to buy our lunch supplies before drivng down to Snettisham. A short stop for a woodland walk in Common Road produced sghtings of Common Chiffchaff and Coal Tit and not much else. We then embarked on the epic walk to the hides at Snettisham and what made the walk even longer was the fact that we couldn't get the minibus into the car park becuase of a height restriction, this meant we had an extra half a kilometer to walk! 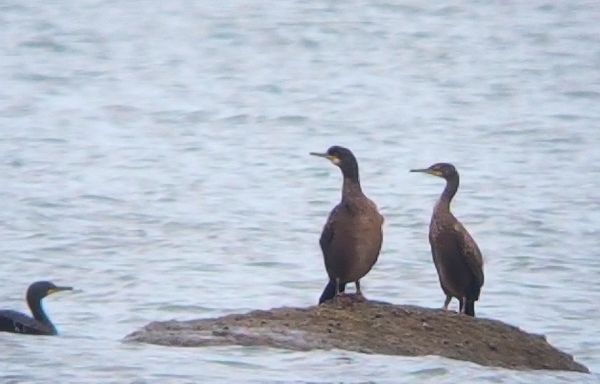 We found a sheltered area and a grassy bank on which we sat to eat our lunch, the bank overlooked one of the many lagoons at Snettisham reserve.  During our picnic one or two of us saw a Common Kingfisher and we were quickly surrounded by dodgey looking Mallards hoping to be fed, many Greylag Geese and a couple of Egyptian Geese sat out on the lagoon. 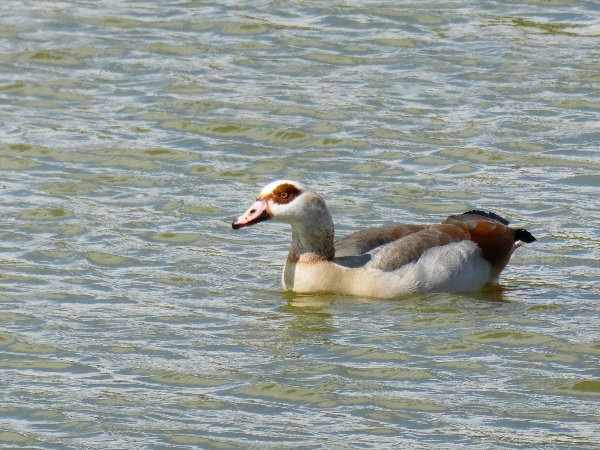 It was still very windy but not as cold as this morning as we walked all the way to the hides which overlook the main roosting lagoon at Snettisham. The tide was way out but on its way in and some birds had decided to roost on the isands in the main lagoon already. A large flock of Black-tailed Godwits covered one island, many of them were in summer plumage and one or two had coloured rings on their legs. We also saw Little Grebe, Goldeneye, Wigeon, Teal, Tufted Duck and Shoveler in the lagoons as we walked by. 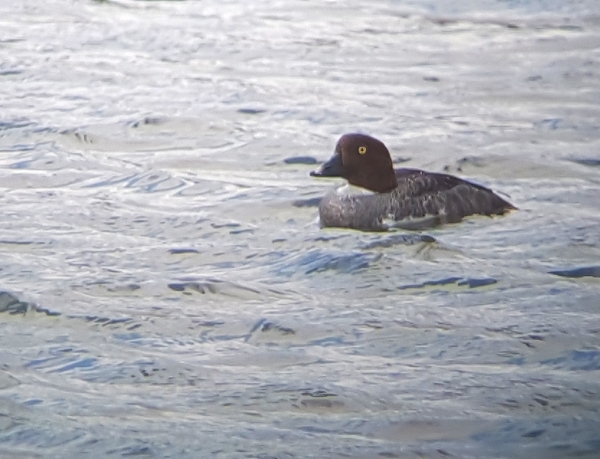 Several of the islands in the main lagoon were covered in gulls, mostly Black-headed, but we did find two pairs of Mediterranean Gulls that were pairing up. A single Great Black-backed Gull and a few Herring Gulls were also around with Cormorants and a few Redshanks making up the rest of our sightings. From the trails we noted Northern Wheatear, Linnets, Goldfinches, Skylarks and we heard a Cetti's Warbler but it was too windy for any serious birding along those tracks. 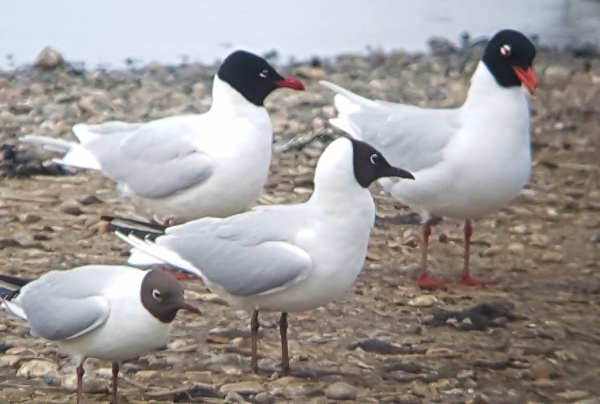 there are two species of gull here, guess which species is called Black-headed Gull

On the return journey we had time to scope into the huge Ouse Wash, the tide was coming in but still very distant from the shore. Nevertheless, we could scope the dozens of feeding waders out there on the mud. Many more Black-tailed Godwits could be seen also large numbers of Dunlin, Oystercatchers, smaller numbers of Avocets, Common Shelduck and Redshank. All the time we were there small flocks of Brent Geese were flying from the Wash onto the arable farmland inland of the lagoons. 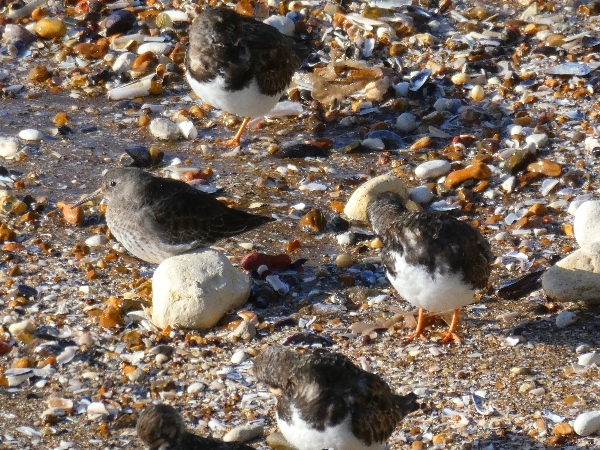 two pictures of the Purple Sandpiper with Ruddy Turnstones 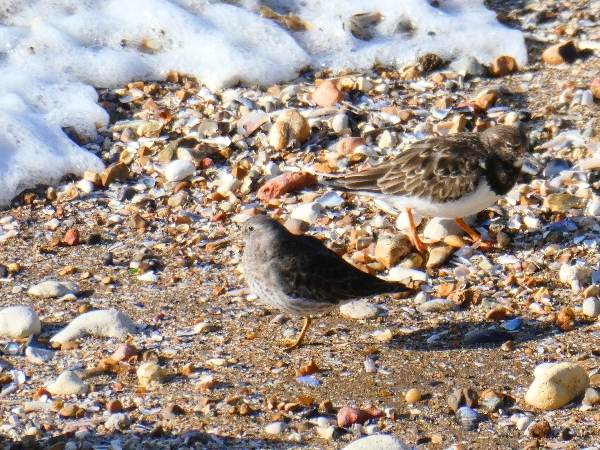 It had been an interesting visit and we all agreed that despite the cold, windy conditions that it had been worth the effort. We had one more bit of excitement left before we returnd to the hotel. On the return journey we decided to give Hunstanton Beach another look before we finished for the day. It was a good decision becuase the tide was well in and most of the rock had submerged, this left only a narrow strip of sand and rocks to search for the Purple Sandpiper. 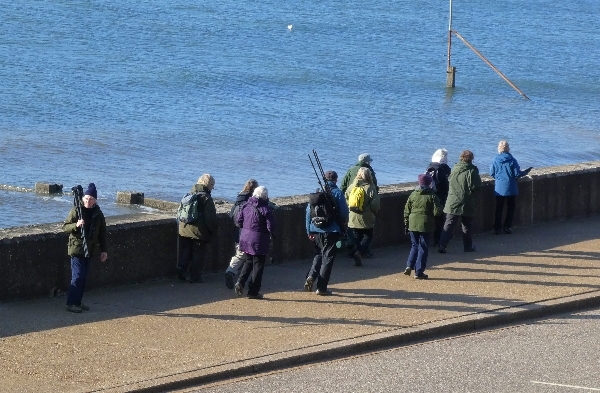 my group 'twitching' the Purple Sandpiper

It wasn't long after our arrival that we found the elusive bird, it was trying to roost on the beach with a dozen or so Ruddy Turnstones, we had excellent views of it before the tide eventually drove the flock off the beach and away somehwhere to a drier roost site.

A tired group returned to the hotel at 6pm, we had walked a total of 14 kilometers today, but it had been an enjoyable day despite the weather. We were all glad to get out of the cold wind and into a warm shower. Dinner was as lovely as usual, I must say the food here is excellent.

Tomorrow we have only the morning left before we have to head off for home.