WEATHER: bright and sunny for most of the day, cloudy with light rain later. Very windy on Anglesey.  Top temp 14C

Some of group ventured out before breakfast and went for a walk along the River Conwy opposite the hotel. The best of their sightings was that of a small group of Goosanders, a smashing find! They also added Song Thrush, Treecreeper, Great Spotted Woodpecker, Greenfinch and Coal Tit to the trip list.

We set off for our day out on the Island of Anglesey at 8:45 and an hour later we arrived at RSPB South Stack Nature Reserve. The sky became increasingly brighter and clearer as we progressed, but the wind also increased quite a lot too. 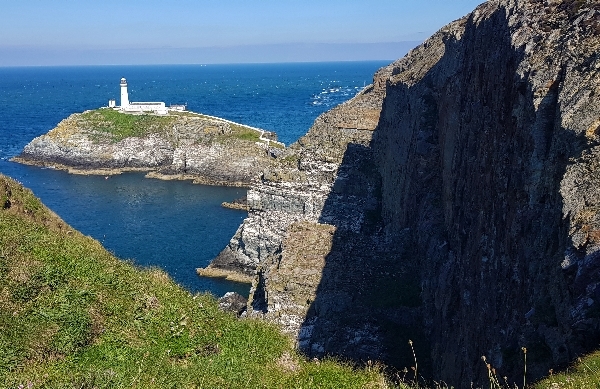 THE VIEW POINT AT SOUTH STACK

South Stack is home to thousands of birds, many thousands of Guillemots with fewer Razorbills and a lot fewer Puffins. There are also Kittiwakes, Fulmars, Cormorants, Shags, Herring and Great Black-backed Gulls as well as Red-billed Chough, Raven, Rock Pipit and Peregrine Falcons. All these species breed on or around the cliff faces at South Stack and we saw them all except for the latter two species. 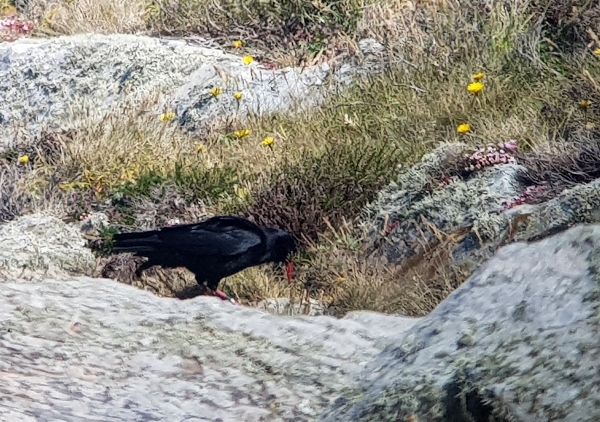 a record shot of a distant Chough

I can’t tell you how thrilling it is to see, hear and smell the masses of birds on the cliffs below you and the spectacle of all that simultaneous movement is amazing. A wildlife phenomenon that leaves you speechless.

After viewing the masses we went for a walk along the southern cliffs working our way eastward, we quickly found a Stonechat, a Dunnock, some Linnets and Meadow Pipits. The wind was coming at us from the northwest and it was strong. A track led us to the lower car park where we saw a Common Whitethroat singing, a Greylag Goose flew over us and many Jackdaws were in view. We hoped to see one of the small number of Hooded Crows that are now in the area but we failed to find one. 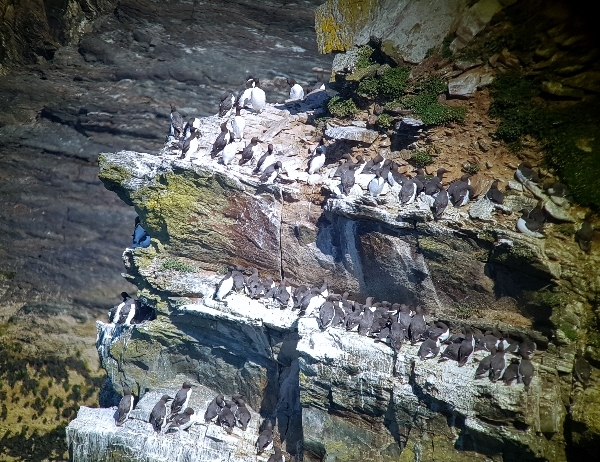 Walking back to the cliffs we added Wren and Goldfinch to our day list and we spent a little more time looking at the cliff-nesting birds. Another Chough flew over and landed not too far away from us.

We decided not to wait in the huge queue for coffee at the RSPB visitors centre, so we drove back into Holyhead and found a supermarket where we could buy our lunch. We then drove to Penhors Country Park to eat it. In the Park we found shelter in the large woodland area that forms most of the park. A series of feeding boxes have been put up for purpose of feeding Red Squirrels. We staked them out for nearly an hour, there wasn’t a sniff of Red Squirrel, far too many people with noisy children or dogs were walking past us. 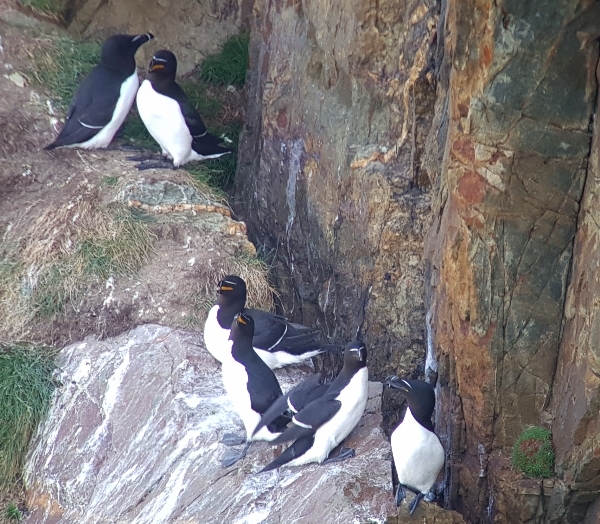 Razorbills - I love their orange-coloured gapes

We did see Blue, Great and Coal Tits, Jay, Robin, Wren, Blackbird, Wood Pigeon and we heard Chiffchaff and Blackcap before we left for the walk back to the bus. Near the car par park we stopped to view a small pools and a much larger one. The large pool produced sightings of Mallard, Black-headed Gull and a few Moorhens.

A pair of Moorhens had two chicks and we were just commenting on the fact that there should have been at least 6 chicks but they had probably been taken by predators. Just as those words left our lips a Herring Gull swooped down and dived for one of the chicks, the worldly little chicks dove under the water and reappeared safe and sound near the reeds whilst the parents drove the gull away! Point proven!! 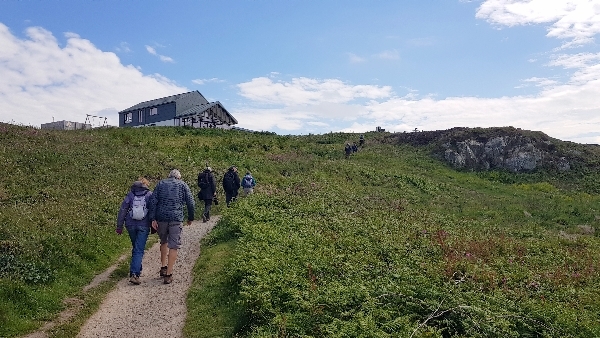 walking back up to the cafe at South Stack

In the bay we saw more gulls and a few Sandwich Terns as we drove away. Our next and last stop for the day was Cemlyn Bay we hoped to see the breeding tern colonies and a few other species as well.

It was windy as usual at the Bay but not as bad as I expected it to be. We parked the bus at the Nuclear Power Station ‘end’ of the bay and walked along the shingle. Scanning the bay we could see hundreds of terns flying back and forth to the ‘tern’ islands behind the shingle beach it was very busy and noisy. 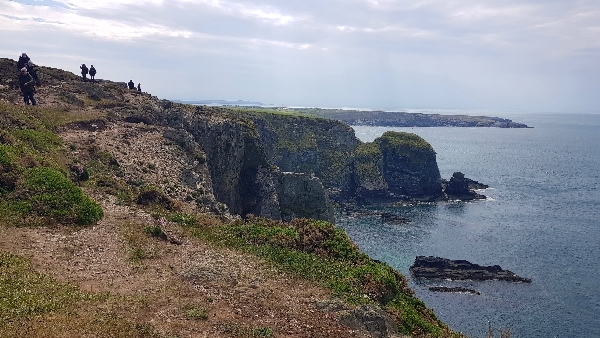 a walk along the cliffs at South Stack

In the water we saw a few Grey Seals and not much else, the brackish lakes behind the beach held Grey Heron, several Little Egrets, Common Shelducks and along the shore we saw several Dunlin and Greater Ringed Plover. The beautiful Mediterranean Gull has started breeding at Cemlyn and we saw a pair of them with the Black-headed Gulls.

Sandwich, Arctic and Common Terns were all seen in good numbers but as usual there was no sign of the single Roseate Tern that had been appearing on a daily basis up until today! We noted three Red-breasted Mergansers in the Bay and several Oystercatchers were dotted about. The group continued to the west car park whilst I walked back to the bus and drove it round there.

From the headland we saw Ruddy Turnstone and in a muddy pool area in a filed we added asingle Bar-tailed Godwit to our list. Common Whitethroat, Goldfinches and Linnets were added to the list before we finally got onto the bus for the journey back to the hotel. 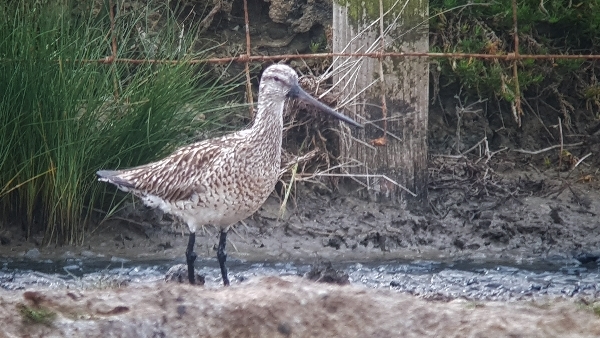 One or two new birds were added to the list by Francis, he went for walk around the hotel and across to the river before dinner. He saw Bullfinch and Greenfinches, but never saw the Goosanders that we seen this morning by the rest of the group.