Our last morning had arrived, our last walk had been arranged for 7am and nearly everyone turned out for it. Some of the group had not yet seen Goosander and some had not seen Kingfisher so they were our target species for the walk.

None of the targets were seen but we enjoyed a beautiful morning and saw plenty of other species. Sedge Warblers, Willow Warbler, Red Kite, Pied Wagtail, a Jay was visiting the feeders and all the usual Swifts, Swallows and Martins were dashing about above us. 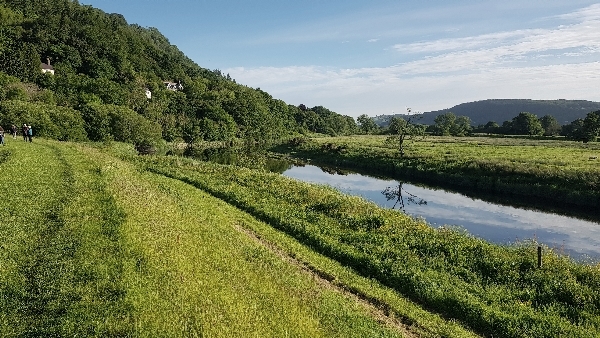 a section of the River Conwy outside the hotel

The river itself was very quiet, we only saw a few Sand Martins and the usual Mallards and a Common Buzzard flew over the meadows. 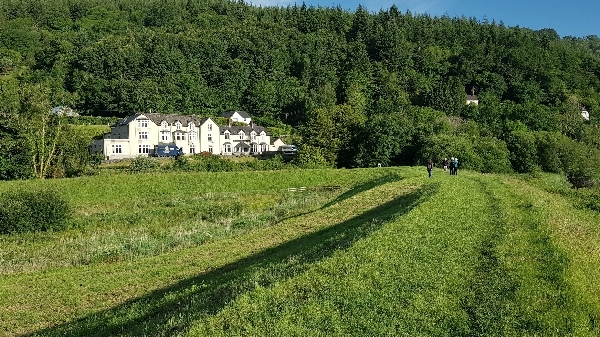 looking from the meadows to the hotel

After breakfast we loaded up the bus and had alast look at the river and the meadows. Two of the group saw a Great Spotted Woodpecker fly over which was quickly followed by a leucistic individual which looked almost white except for a cream hue and a little bit of red on its head. We then spotted our first Sparrowhawk of the trip, it dashed down and tried to take a Sparrow off the roof!

A Great Spotted Woodpecker then flew down to the feeders along with Blue & Great Tits, Chaffinch, Greenfinch, Dunnock and Robin. We then saw a bunch of Goosanders on the river! There was 11 adult birds, they all looked like female types, some of them could have been eclipsed males, but they were distant. What a great bird to end our visit to Trefriw with! 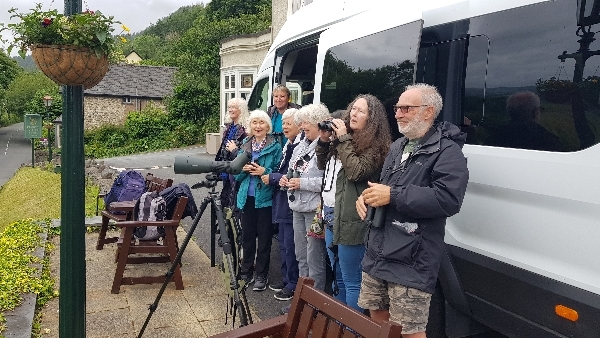 just before we loaded up the bus

We said goodbye to the hotel owner, Lindsay, what a great service he provides, the food was outstanding and rooms excellent.

We drove the 10 miles down to the ‘Ugly House’ for a final look for Pied Flycatcher. The nest boxes there held a pair last week, but during our first visit on the 6th June we feared that the young had fledged and we dipped the bird. 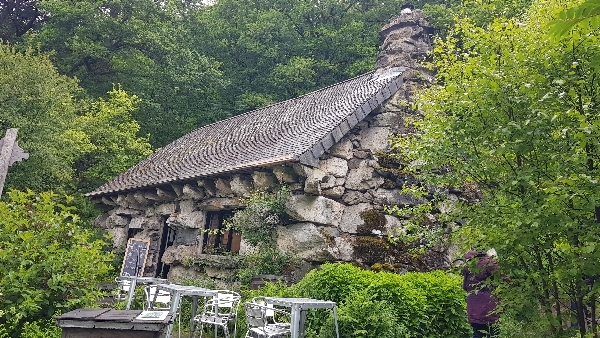 We quickly found a lot of birds visiting the feeders including another Jay, we also bumped into a pair of Nuthatches and this time we all saw them. Then we walked up the hillside through the wood following a circuitous path. We wound our way almost to the top of the wood where Jacqui shouted out ‘there’s one’. Sure enough, a male Pied Flycatcher sat nearby carrying food, we stood still and he flew down to a nest box very close to the path, smashing!

Two females also appeared, both carrying food, they would not approach the nest box so we moved away up the footpath. The male disappeared for quite a while, our assumption was that he was feeding chicks in two nest boxes and had two families on the go!! This polygamous arrangement is quite common in Pied Flycatchers.

After a quick look at the river where Grey Wagtail was seen, we had a quick cup of coffee before we set off for our journey to the train station in Shrewsbury. It was approaching lunchtime so we popped into the reservoir at Llyn Brenig to buy and eat lunch and use their facilities. We watched the Ospreys on the webcam and the Siskins and Redpolls on the feeders. We also saw Willow Warbler, a Meadow Pipit displaying, Goldfinch, Chaffinch, Lesser Black-backed Gull and Greylag Goose. 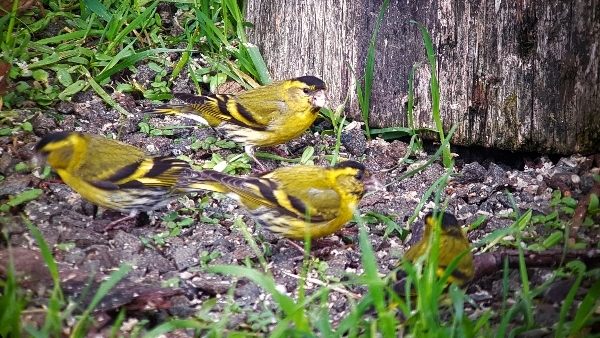 male Siskins at the Llyn Brenig

The last leg of the journey produced more sightings of Buzzards and Red Kites but the weather deteriorated and it rained a lot. We arrived at Shrewsbury at 1:50pm, I dropped off my group and headed for home in Somerset. 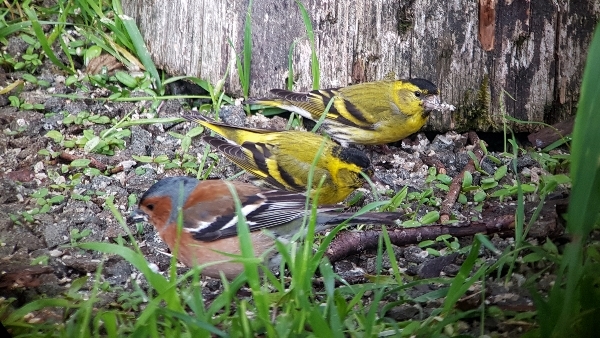 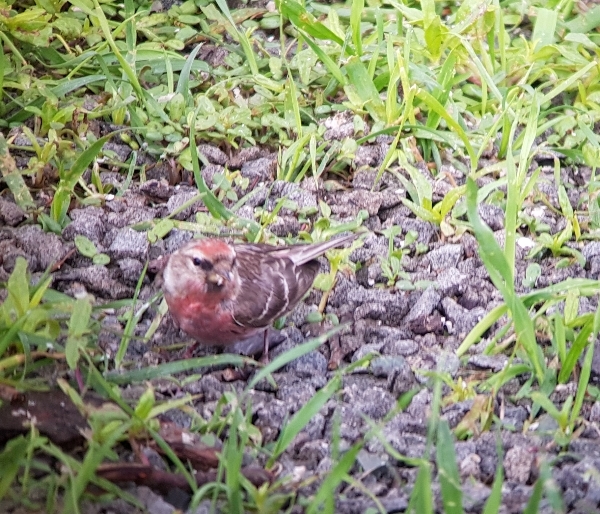 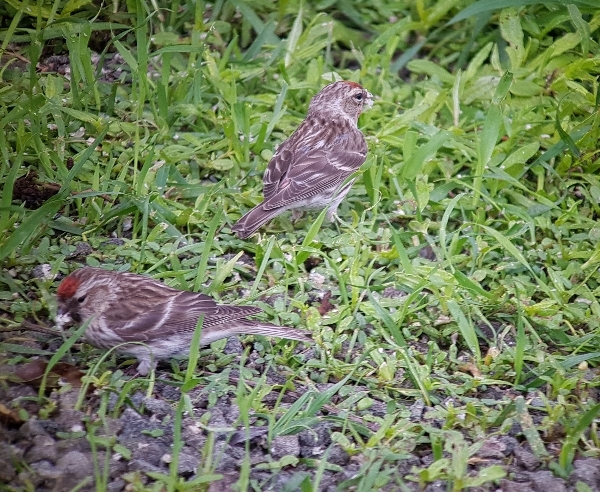 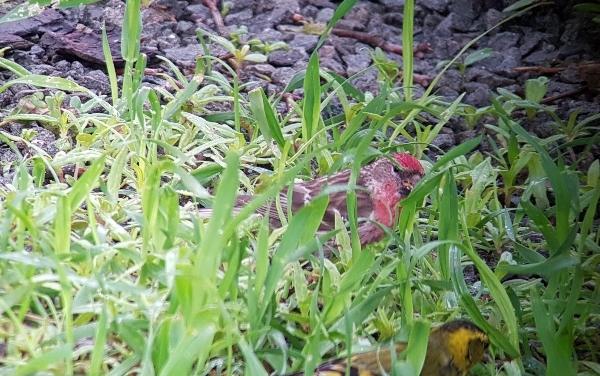 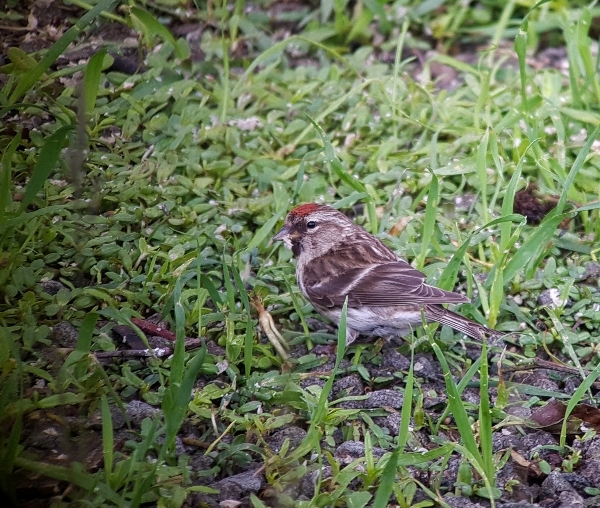 Apart from a 30 minute hold up around the M5/M6 junction it was a smooth fluent journey home, I arrived home at 5:30pm.

Both groups had seen around 100 species, the first group recorded 104 species but six of them were heard not seen, whereas the second group recorded 98 species and saw all of them. I call that a draw.