WEATHER;  rain to start which eased off by 10am, bright and sunny all afternoon

It was inevitable, it had to happen, we had a thunderstorm in the morning instead of the usual late afternoon. By 8am when we set off the thunderstorm had passed over but the rain continued for another couple of hours. We drove northward and ended up very close to the Bulgarian border in a woodland that looked very English in the rain. 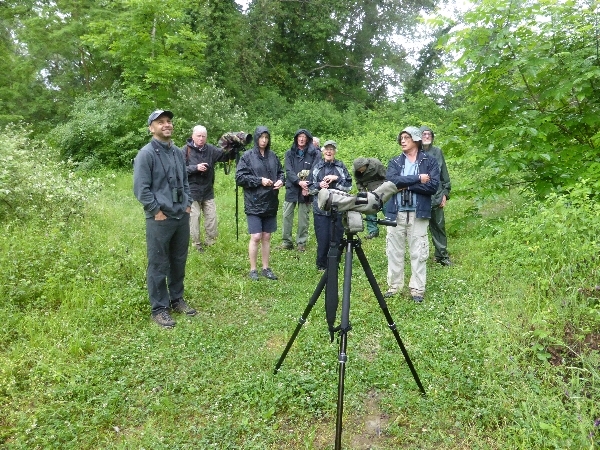 In the woods in the rain, how nice!

We were all wrapped up in our waterproof clothing as we took our first walk of the day into a mature woodland full of tall trees and grassy glades. It was wet underfoot and light rain fell for most of the first hour but it did stop whilst we were there.

Common Nightingales sang out in the rain and very soon we reached an open area where we could see tree tops in all directions over a clearing. We located a Lesser Spotted Woodpeckers nest and watched the adult birds visiting on a regular basis, we had great in-the-scope views of mainly the female. 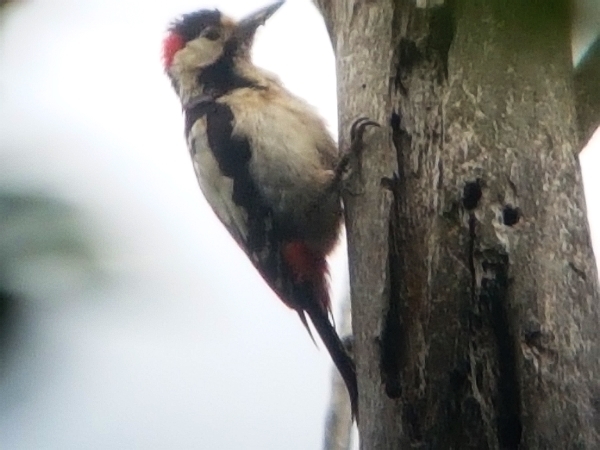 the best I could do in the poor light - Syrian Woodpecker

Golden Orioles called often, a family party came into view several times but only for very short periods, a Hawfinch was nice to see and many common garden birds showe3d up including Great Spotted Woodpecker, Eurasian or Wood Nuthatch, Blue Tit, Great Tit and we heard Middle Spotted Woodpecker.

On our way out we stopped at another clearing and added Spotted Flycatcher, Marsh Tit and a Middle Spotted Woodpecker called just before flying over us, marvellous. Back out on the road near the vehicles we then watched our fourth woodpecker when a Syrian Woodpecker came into view, it also called and drummed for a while. 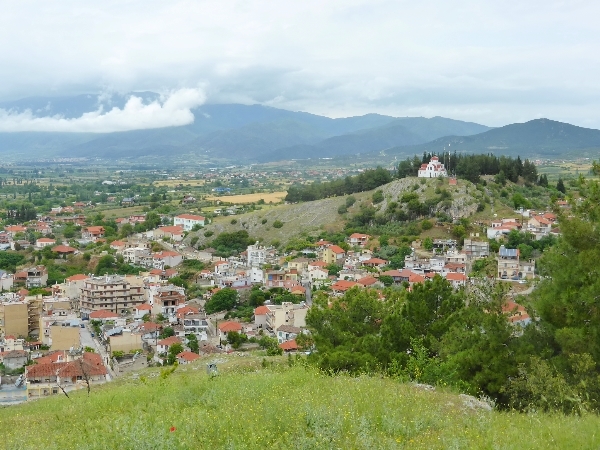 A view of Sidirokastro from the Castle

Scanning around from the vehicles we added Turtle Dove and Common Cuckoo to the day list and then e heard a Black Woodpecker calling from the trees down the road. Further investigation produced a very brief sighting of the Black Woodpecker by one participant but we all had ‘scope views of both Green Woodpecker and Syrian Woodpecker, that’s six woodpecker species in two hours!!

A Roller called and then flew over us as did Common Buzzard but we couldn’t get better views of the Black Woodpecker so we drove into the nearest town, Sidirokastro, where we bought our picnic lunch and ate it in the pretty town square whilst drinking coffee. 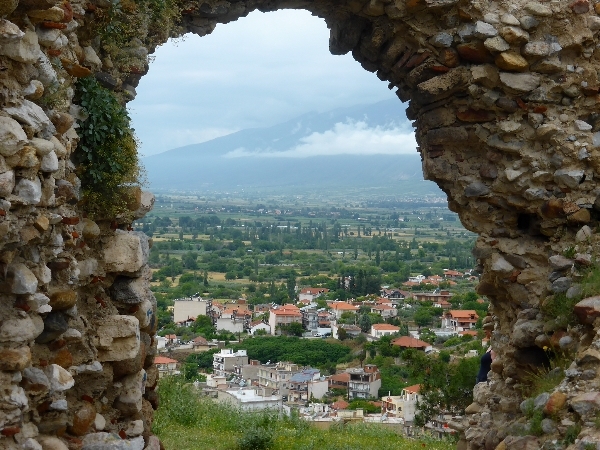 taken from the castle of the town

Sidirokastro is famous for its huge rock tower that overshadows the town and it Castle Ruins on the top, we scanned the rock face for Rock Nuthatch without success but we did find Tree Sparrow, Black-eared Wheatear, Jackdaw and a Eurasian Hoopoe called all the time we were there.

Following our visit to the town we drove up to the Castle and spent a lovely time in the sunshine chasing butterflies and watching birds. A Hoopoe fed on the grass where we parked the vehicles and several Black-eared Wheatears were seen around the Castle grounds. We finally got the Orphean Warbler in the scope for the group.  A few raptors flew over, mostly buzzards Common and Honey. 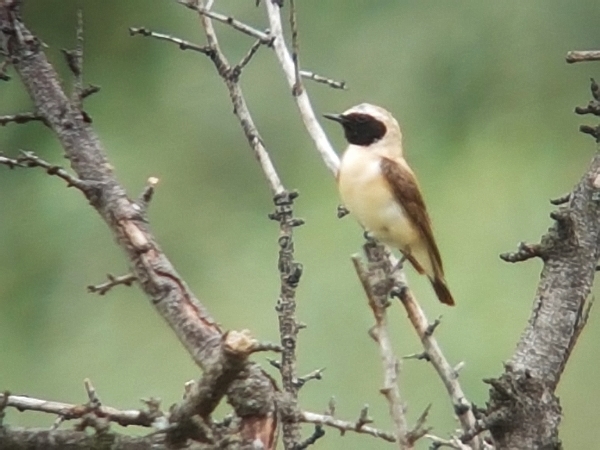 The next and our last two hours of the day were spent further up the valley north of the town where deep gorges have steep sided rock faces, ideal for the Western Rock Nuthatch which was still missing from our list. We found more Black-eared wheatears, Tree Sparrows and Blue Rock Thrushes. Raptors were prevelent in our sightings too, we saw three species of Buzzard in a fifteen minute spell, Long-legged, Common and Honey. One of the  Honey Buzzards gave us a ‘wing-clapping’ display, the second time we had seen this on this tour, amazing since none of the group had ever seen it before. We also saw Levant’s Sparrowhawk, Common Kestrel, a host of Jackdaws and Short-toed Eagle. 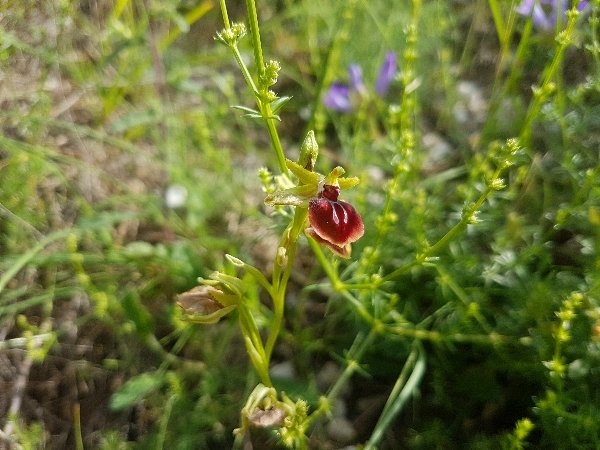 With perseverance and diligence, we found the Western Rock Nuthatch, fantastic work, but it was time to move on, time was running out. Our last sightings were made at another viewing point further up the valley. We were hoping for a sighting of Golden Eagle but had to settle for the fabulous Alpine Swift, what a magnificent bird that is, so graceful and large at the same time. We enjoyed the late afternoon sun chasing a few butterflies, including Iolas Blue, Safflower Skipper and others. 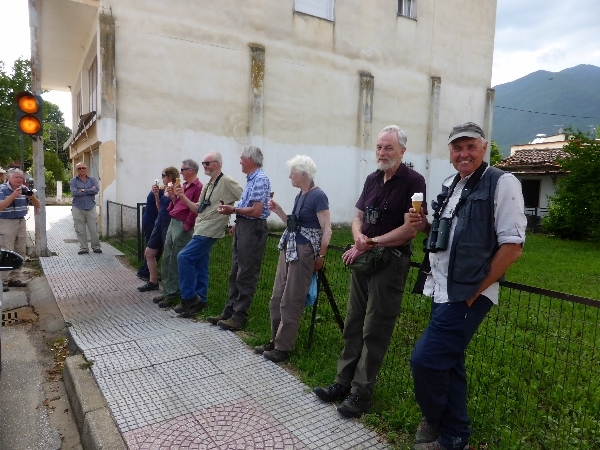 We were back at the hotel with just enough time to shower and get ready for dinner, another joyous occasion, its so enjoyable when everyone is having a good time.